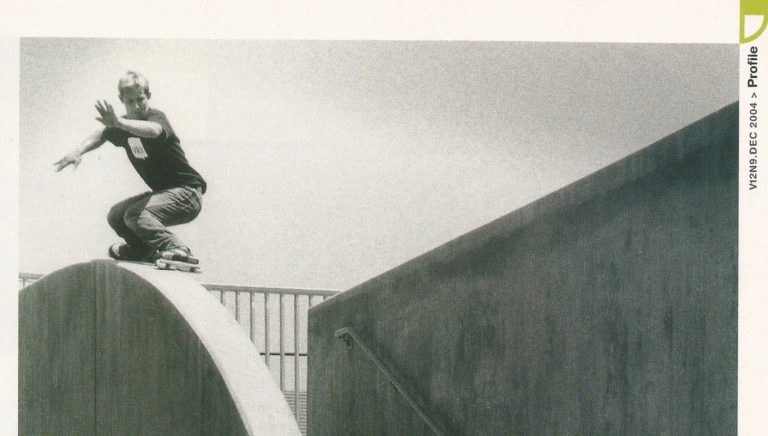 For Your Consideration: The Humble Frontside (Part 1)

It turns out that the humble Frontside is a rather complicated little scamp and much can be said about it—so much so that I’m going to have to divide up everything I’d like to cover about it into two separate posts.

In this first one, I want to share some insights from both old schoolers and some more-contemporary bladers with faith that their comments will help contextualize the analysis that I’ll write for the second post. In that second one, I’ll share a few more institutional knowledge quotes, cover some pre-frontside/pre-grinding rollerblading history (don’t worry, just the relevant bits), track some of the diversity of names the frontside has held in various places and what those differences mean, and ask the age-old question “what’s in a name?” The goal will be to see if we can’t reconcile the underlying semantics and rhetoric of the name with the ways the group of bladers in this post thinks and feels about our dear old friend the Frontside.

There are a few themes or self-emergent categories that may jump out at you in what follows, but I’ll present the remarks here without a lot of tinkering so that you can appreciate how gray or fuzzy the boundaries of any such themes or categories really are. I’ll expand on that a bit in Part 2. 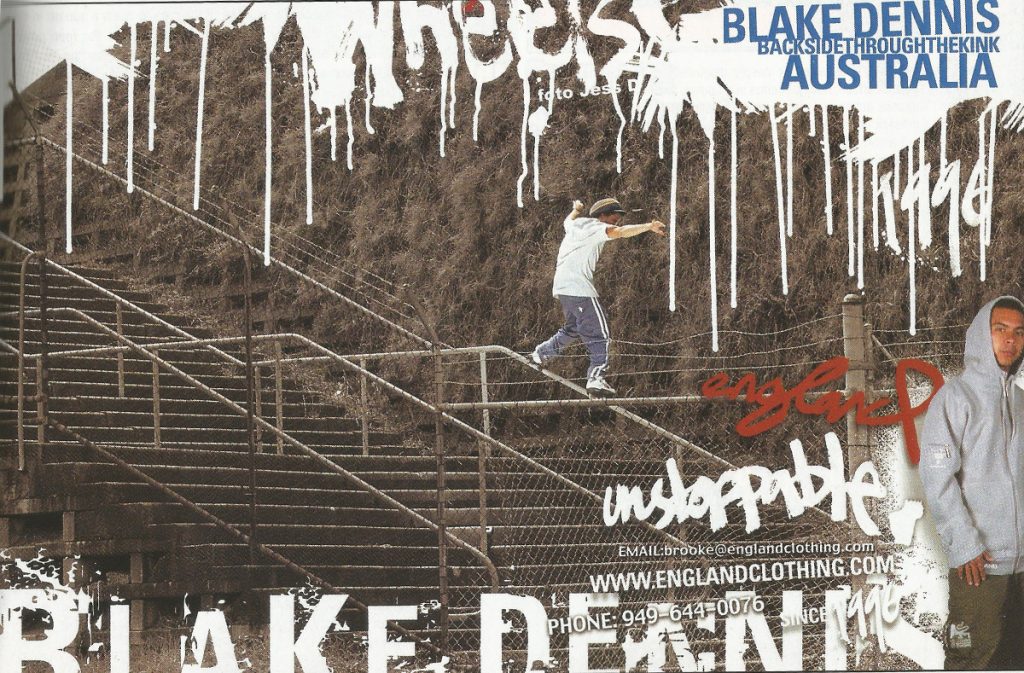 For now (and, lastly, before we get to the remarks) you should know that the question I asked these skaters was purposely vague. I simply said that I was writing a piece about the frontside… about how there may be more to it than it sometimes get credit for, and then I asked whether they cared to offer any thoughts.

Here are the responses:

Robert Guerrero: The frontside was the gateway trick for me towards enjoying the zen like experience of balance. I feel that life is always seeking this balance or equilibrium, and the frontside is our most basic tool on blades to explore and enjoy this feeling. I grew up in an age of blading where there was basically only three tricks. The mizou, the soul grind, and the frontside. During this period (the early 90’s) a huge part of innovation was balancing long rails, and doing big kinked rails, so this inspiration has stayed with me to this day. The frontside will never be an outdated trick for me because the experience and enjoyment of balance will never be outdated.

Achieving the state of balance where you are so relaxed that you are not trying and simply trusting and enjoying the ride is a state of being I like to enjoy in all aspects of life, so the frontside has always been one way for me to have that experience.

Cody Lampman: Let me try and wrap this up as shortly as possible. The lesser skater, seeing a “professional clip” in which the “professional skater” does a frontside, often times will disregard the entire clip, based on the mentality that plagues skating today; rather than look at every aspect of the clip (namely location, obstacle, danger, difficulty, and style) the lesser skater sees a frontside, and thinks to himself, “I can do that trick on example easier obstacle, so why is Example Pro doing it? He must have fallen off / be afraid to fall / be a hipster / be a pussy / etc.” As life-long skaters, it is our responsibility to pay attention to every aspect of the clip, whether out of disdain or respect for the section we are watching. This ability to, often-subconsciously, examine every part of a clip is what separates the developed taste from the undeveloped. It’s not snobby, it’s just a natural progression of our art.

That’s how I view the frontside as a critic, but, as a skater, I am fucking terrified of them. On the rare occasion I find myself in a position where I have summed up a spot and come to the conclusion that a frontside will be sufficient, it is always, and I repeat ALWAYS, because the frontside is the most risky trick to do there. Not the most risky trick I can do, but the most high-risk trick given the spot. If you don’t follow me, go try and frontside a steep wall-rail. Nothing gets your heart going quite like that, and nothing is as pleasing as finding a dangerous frontside.

There’s just something very cool and underestimated about it, and maybe we should keep it that way. 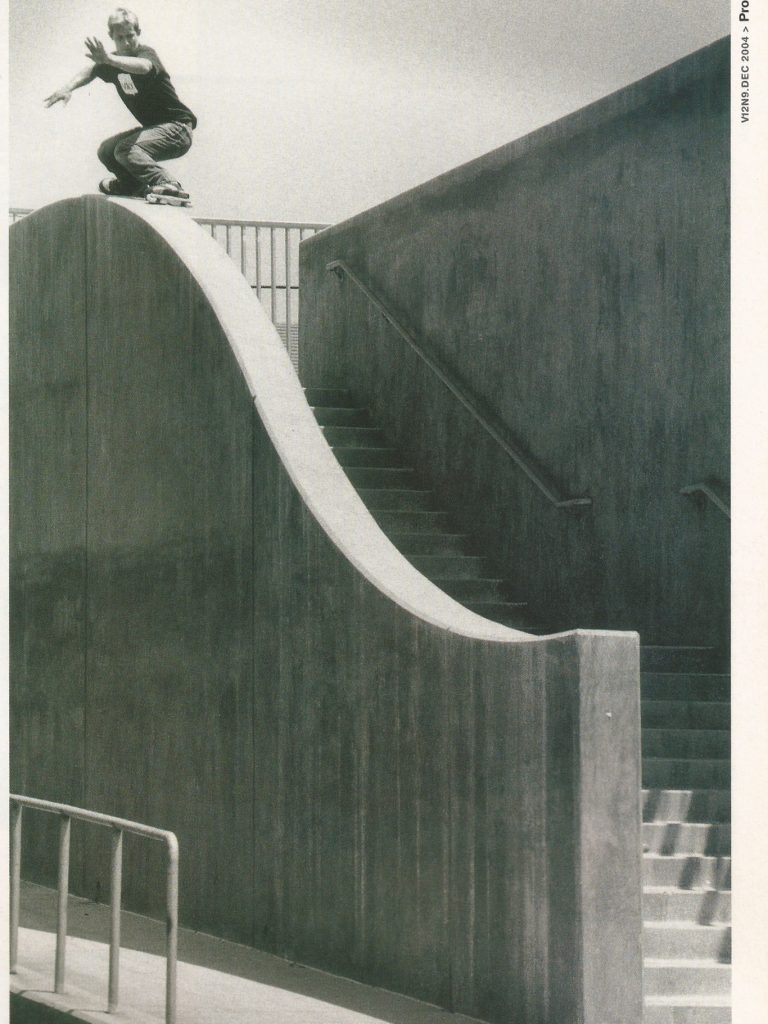 Leon Humphries: The frontside grind seems to carry more ‘baggage’ than many, if not all, of the other grinds we practice. By the very virtue of its age it seems to have weathered every evolutionary stage of skating. It seems that when it is done there is always some memories attached or an idealistic reverence for those witnessing it and those practicing it.

It might relate to the notion of returning to ‘the essence’. To think of a frontside or during a session when someone does a frontside, there seems to be a resonant ‘hum’ or ‘aghhh’. The responses differ in volume or excitement depending on the obstacle. A frontside on a drop rail, fully stood up is incredibly exciting, harrowing, and potentially dangerous. Images of our early professionals frontsiding kinks, splitting them or hurtling down stairs on their backs on occasion come to mind. Those guys were in a lot of danger in those early sessions, but the desire to do a grind was strong. The ‘heart’ and desire of those individuals is a potent energy to tap into; it feels good to reflect on all of that furious positive energy and metabolize it in the present day.

Shannon Rodgers: Frontsides are possibly THE hardest trick for me because I’m right footed (on soul tricks) but I royale left so I’m not sure which is my true front side. Also, if you miss one foot, you’re asking for chin stitches! 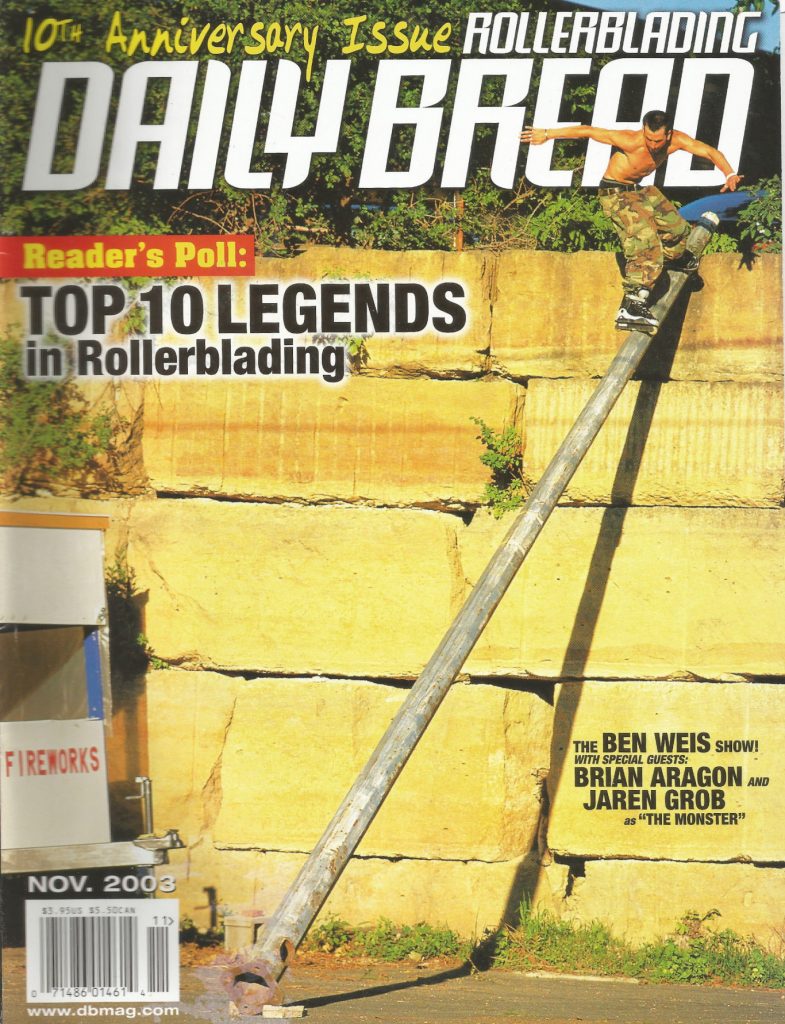 Lonnie Gallegos: I think they’re actually one of the hardest tricks you can do because there’s no safety in missing the lock—like a royale or a soul that has a “safe” foot, or keeps you close to the rail like sitting low on a soul. Nine times out of ten a frontside is the gnarliest trick you can do on any given spot.

Geoff Acers: I agree with Lonnie. You can quote us both on that, ha.

Eric Schrijn: I dig them… I think the front side is literally the back bone of our grinding vocabulary. [Frank Stoner to Eric]: Does it strike you as odd that frontside IS the backbone of grinding (like you said) and yet it doesn’t really even have its own name? Eric Schrijn: So then would the frontside grind be considered an orphan? It’s crazy to think that it’s always held its weight as being just what it is… a basic grind that you do going forward. I think that explains the name. But I think somewhere during the development stages of blading the focus just was lost. Too many people all over the world were doing so many grinds… Julio was literally making new grinds up every day it seemed haha!

Guys like BBell pushing it with what grinds were available.

Cody Sanders: People always said frontsides were easy when I was growing up and I never understood it. I learned royales and fahrvergnugens about a year before frontsides.

I guess it was commitment issues.

If something goes wrong while you’re locking a frontside it’s usually the worst kind of fall. Unlike royale—where it’s possible to just slip back onto your back leg and slide out—on a frontside you just have to take it.. I always thought that was a scary trick, haha.

Jeremy Spira: The frontside, properly done and known as the UFO, is the basis for all rollerblading grinds. Doing a UFO on an obstacle is the epitome of abducting all the props at the spot.

Alex Burston: I love frontsides, man. A scary trick to do down a kink rail. 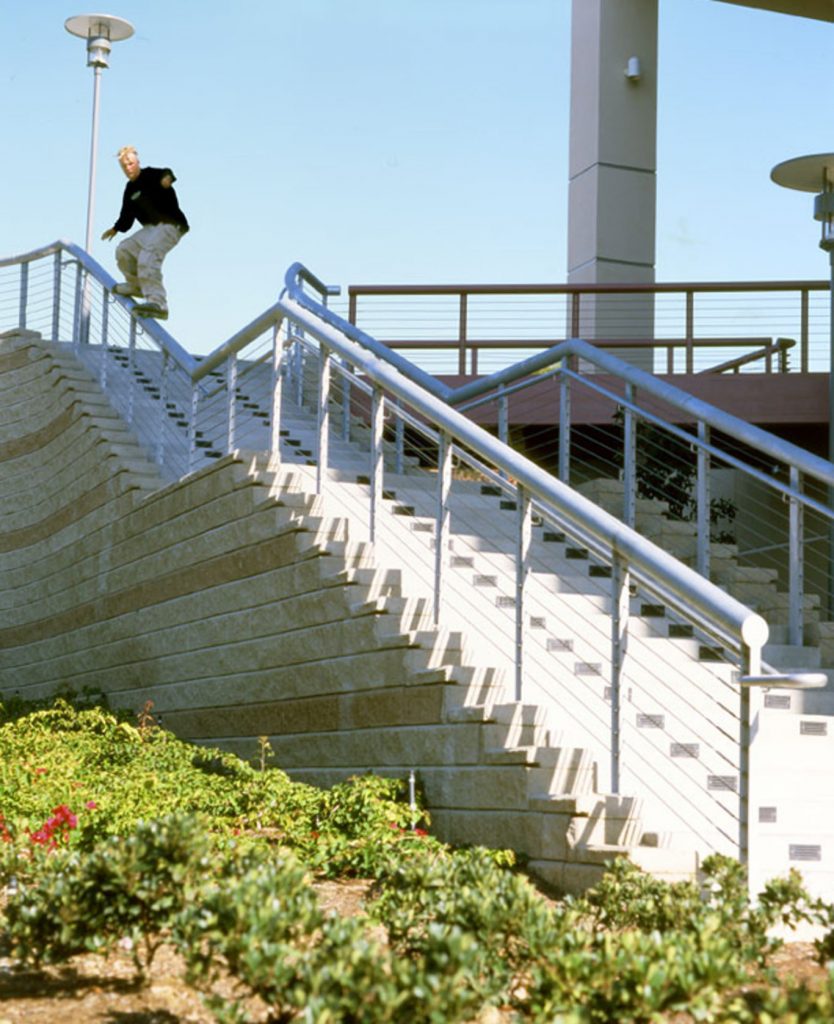 Justin Chad Anthony: It is our 50/50. An irreplaceable point in which we, as people with rollerblades on, can capture centeredness. A way to experience the same sensation you can find on a surf board. In its own way, at a given point, a yoga-like position. Serenity can be found on a basic side. The simple bending of your ligaments can transform the grind into many different correct versions.

Though it’s a tad bit goofy looking, it can be served well with cheese. Ode’ to the frontside. You’ve given us our UFO’s.

Ant Medina: There is no better feeling than surfing a long frontside or frontsiding a kinked rail. It’s been there since day 1 yet it’s probably one of the most underrated tricks today. It’s crazy to think about all the insane frontsides that were done in the past simply because other, safer, tricks didn’t exist yet. Like nearly everybody in my era, the frontside was the first trick I ever did and I think for that reason, it will forever be my favorite trick.

Hamish McCrae: The frontside is a staple of street skating… it’s like breakfast you always eat it first…

Michael Garlinghouse: I realize it’s a backside UFO, however this image is my quote.

Charles Dunkle: The frontside is one of the first and easiest grinds most skaters learn. I would argue though that a frontside can be one of the scarier grinds to attempt when the rail you are grinding starts to get up there in length and steepness. A frontside has a tall center of balance so you have to commit almost even before you jump on. If someone offered me a million dollars to grind a steep 25 stair drop rail I would try to soul grind it before I attempted a frontside.

How many times have you seen people frontside a rail to rail?

Adam Johnson: The frontside for me is a Top 3 grind, [and] sexier than the soul and mizou. It’s like the first love you haven’t gotten over and once you reconnect it’s an amazing thing.

One cannot however live off frontsides alone, you need the mizou and the soul to keep from getting bored.

I love when people frontside—I prefer them to royales in videos. I would rather encourage someone to frontside something fucked up than to royale it. Royale is a safety trick at this point—given the way skates are built. Getting boot on royale and not being shifty used to be difficult, those days are gone.

There are frontsides in most of my digiflicks, the most memorable one of late is Farm‘s frontside on the kink rail next to the fence. Another classic frontside was the one he did on the wall rail in On Top.

Don [Bambrick] did a frontside on this sweet curved rail through a forest in his VOD… WAYYYY sicker than topsoul or anything else he could have done. There is a certain speed and class to the frontside that other tricks lack.

They are very powerful. 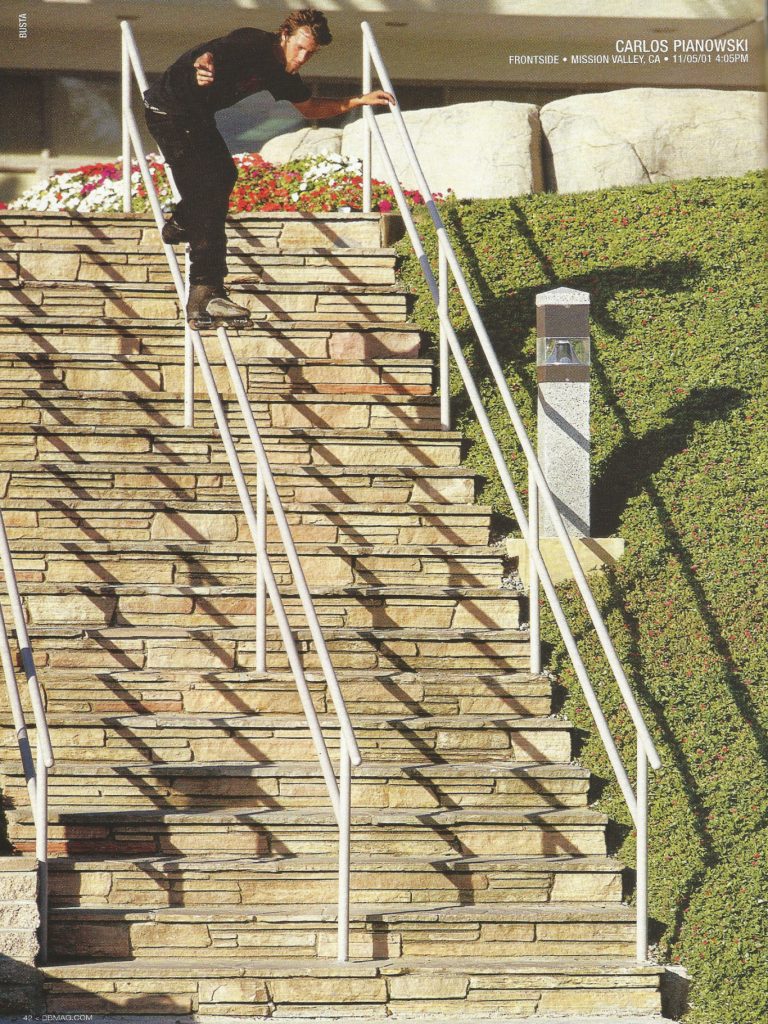 Micah Yeager: When I started skating in 1997 a frontside was always a starter trick. Like a stepping stone to a royale. But then 1998 happened. Josh Petty single-handedly made that trick legit again.

But the fact of the matter is, style is everything. We all have friends that murder simple tricks so badly it confuses you. You just really have to feel the trick to make it look right. A personal example: mistrials. My feet separate like Matt Andrews but I just don’t look right doing them hah. So I don’t.

Chris Haffey: The frontside will forever be one of the satisfying tricks to do. No matter how good you get or how many other technical tricks you can do, it will always feel amazing to casually jump on to a smooth, perfectly balanced frontside.

Thanks so much for your consideration.