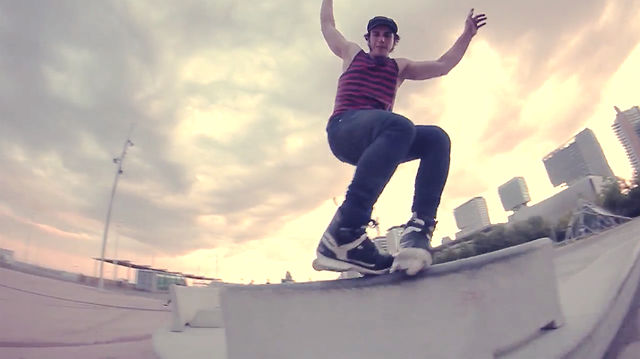 The day before we flew to BCN, Maik and Mr. Gourski picked me up in Nuremberg and we drove to Munich where we spent one night at my parents place because our flight (thanks RyanAir) went from Memmingen, a really small airport, to Munich. The next morning, shortly before we drove to the airport, Maik noticed he had forgotten his ID card 400 km away at home. But, with a lot of luck and help from my father Maik managed to get a preliminary ID for the journey.

When we arrived in BCN we immediately put our luggage into the hostel and went out looking for some spots nearby to film a little. The next day, after a hard and long night like every other, we met Tony Cheetah, our spot guide for the tour. I want to throw in a quick thank you to Tony for being the man and helping us out so much. He showed us unknown and really great spots where we filmed a lot. I loved having the chance to skate in the Mecca of blading.

We met a lot of new people, had a ton of fun, partied often, and skated a constantly. We enjoyed it all. Everyone on the team is really talented. Mr. Gourski’s style is killer and the style of Mr. Kittlitz is so clean. Mr. Lopez is like a feather and Mr. Torque himself. Maik is a curb machine. Mr. Prell – I can’t even believe what I see every time I get the chance to skate with him. In my opinion, he is the man with the biggest balls on the planet. During the tour he did drop rails with disasters and hard tricks. He did a rail-to-rail transfer on a chin high rail with more then four meters drop and that was just the start. Daniel is a rollerblading machine. All of those guys, I love skating with them.

On the last night Maik and Daniel G. had a small private party and didn’t sleep. So, in the morning of our departure they were so drunken and tired that almost missed their flight, but in the end everything worked out.