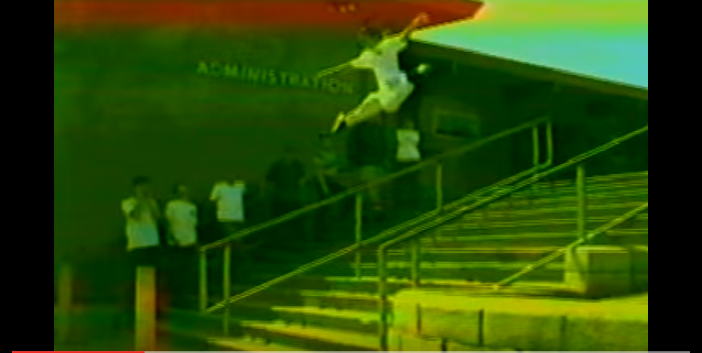 Forget VG Rootz (not VG20), this video might be the lost Holy Graal of rollerblading. Dayton Coopersmith is a triple OG rollerblader, who skipped school to film for Hoax II, actually taught Jon Julio how to ride ramps and did a great job at that, and at one time rode for Rise Above, the goody two shoes rollerblading apparel company in the mid to late nineties. Before that, waaaay back in 1992, Dayton one day went out with his buddies and filmed the video appropriately named Monty Boyz, the Monty Boyz being his crew that rollerbladed at the Monterey High. It’s the stuff real legends are made of: mullets, shantz, three buckle skates… and sick, pre-grind era rollerblading, filled with big airs launched from tiny kickers, straight gaps, and some candy 360’s over a Toyota truck. And possibly the first attempt at a backslide ever to be caught on camera.

To find out even more about Dayton and his stories of days past, be sure to check out Brian Krans’ Blade or Die podcast with Dayton, also featuring the video.