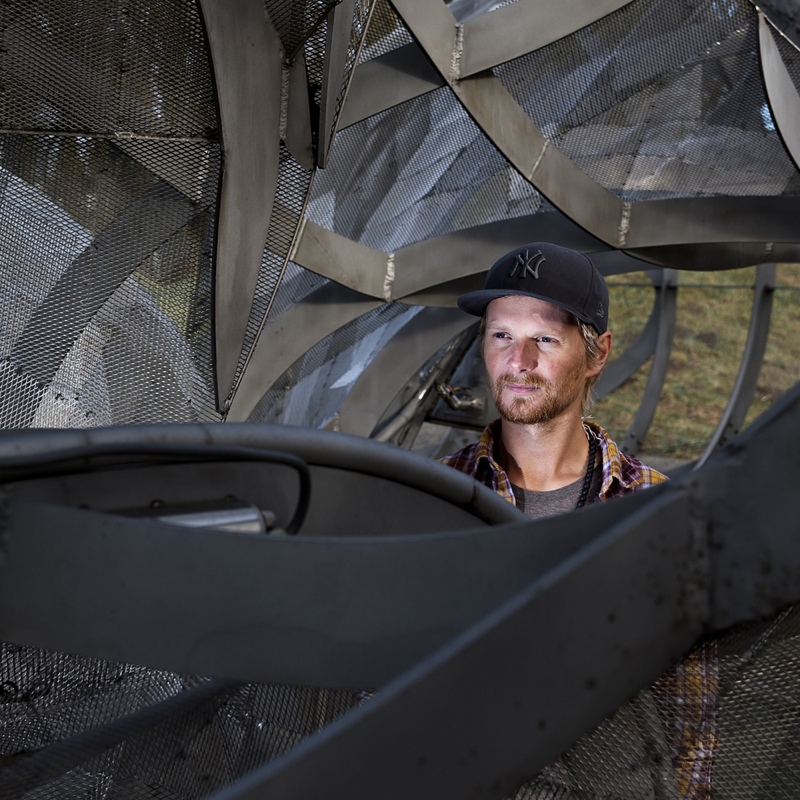 Sven Boekhorst is a name that most of us got to know through TV and magazines more then 10 years ago. The Rollerblade Pro traveled the world to compete in the biggest events that ever happened in blading – and won most of them. Today he is focussing on his own show company and is working on unique projects with his friends and partners. In the first part of the interview he told us about his new project „Blackout“ and today he will talk about about his career and future.

You recently announced that the Winterclash will be your last competition ever. Do you
want to tell us a little bit more? Why now, why the Winterclash and what’s the whole
feeling behind it?
I guess the main reason is my age, and that I donʼt care so much about competing anymore,
and haven’t really for the last 5 or 6 years. I’ve competed in enough competitions. I picked
Winterclash because itʼs the Winterclash, and it’s in Holland. Sounds cool in combination.

Do you remember your first ever competition? Where and when was it and do you even
remember where you placed?
I think it was 1995 in Vlijmen, a small village close to Den Bosch (my hometown), in The
Netherlands. We found out there was a blader celebrating his 14th birthday with a competition and his mother
put 10,- Guilders (old Dutch currency, worth about €4) for first place. We went with our bikes
to this village to compete and meet the bladers from there. The contest/birthday was next to a
school, where they collected all the small rails and ramps and built their own street course.
A funny story is that the birthday boy turned out to be Randy Abels, who is still one of my best
friends and also still blading.

Any idea about how many competitions in total you’ve ever skated, or how many times
you’ve placed on the podium?
I think around 130 competitions, of which I made it 80 times in the top 3.

That you’re going to stop competing doesn’t mean that you will slow down in blading,
right? What else are you doing on blades right now?
At the moment Iʼm still blading and hopefully I can continue until Iʼm 70. Besides that I run my
own show company, which also organizes contests and runs workshops. Itʼs not 100% confirmed
yet but the plan is that I‘ll get my own office in the new World Skate Center, so hopefully I’ll do
more and more stuff with this as well.

If someone is interested in booking a lesson, how can they reach you and can everyone be
part of it?
Sure, send me an email — info@sb-events.nl

In your position as the Rollerblade Team manager, what’s your main function?
Taking care of the flights, hotels and other stuff for the team weekends and contests.
Making sure we create some nice videos and photos. Iʼm also the contact person between them
and my boss, and to make sure they have their product and stuff.

Is there anything planned for the team for 2013 already?
Before Winterclash we want to shoot a video at a pretty cool spot in Holland with everybody.

Right now you’re still deeply involved in blading. But what are you planning for the
future? Do you want to stay involved, or are there other things you want to try in future
and maybe get a job in a totally different direction?
It has already been in my mind for a couple of years to do something completely different. To
start some kind of study, but in the end it always goes back to blade stuff. So who knows about
2014. For this year I want see which way I can work more with my company together with the
new local indoor skatepark. I really hope we can push blading more and more in Den Bosch, as
the park has a really nice location for parents to bring their kids and besides that the park is going
to look really sick! The opening will be the 2nd of March 2013.

Despite travelling on various far-reaching world tours, do you feel being based in The
Netherlands has affected the opportunities and trajectory of your career? Do you feel
things would have been significantly different had you moved to California for a few years?
Maybe. ASA also gave me the opportunity to move to the USA so I would have more chances
for bigger sponsors and more shows. But at the time I was feeling home sick pretty quickly. The
max time for me abroad was 2/3 weeks. But in the end I’m happy how everything went and I
don’t feel sorry I didn’t do it.

What are your feelings on the current Dutch scene? Are you encouraged, and do you
feel it’s well represented?
It’s cool to see how people are getting along from each of the cities, and that there aren’t really
groups that don’t blade with each other. Especially with Winterclash it’s cool to see that most of
the Dutch crowd is standing, jumping and drinking together!

Who do you think is the most exciting current prospect in Dutch blading, someone we
should all keep an eye out for this year?
Hmm I would say Edwin Wieringh. Everybody already knows how good he is, but somehow
he’s not making the next step. Or not given the opportunity to. It’s just crazy if you talk with the
guy how motivated he is. Another rider that really impressed me is Tasheed Zaalman from Rotterdam. Last year he won
the Dutch Championships junior and this year he won senior. Not sure if he will compete at
Winterclash. I hope so.

Are you proud of the strength and reputation of European blading, or do you see areas
which could flourish with some investment and encouragement? Further, where in Europe
is your favourite place to skate?
I think blading in Europe is really strong and we’ve got a lot of really impressive riders but
somehow the real smooth and stylish bladers are coming from the US. This was the case in 1995
and it still is. I don’t really have a favourite place to blade. I always like to go to one of the big cities in
Europe: Berlin, Barcelona, Paris, London, Rome. But it’s not only because of blading, just the
whole vibe around it.

You have been skating on Rollerblade for an awfully long time. Have you ever been
curious about other brands, and perhaps considered trying them out, away from cameras
and sponsor obligations? Do you think being on the RB boots for your whole career has
influenced your skating style?
Maybe but I don’t really look at it that way. For me they were always nice and took care of me.
Of course there were periods when it was a bit less but that’s the same in every relationship I
guess. In 1994 I skated on Roces and tried some other brands but in the end I got sponsored by
Rollerblade and stayed with them. If there was a brand I’d like to try once it would probably be
Adapt, because of the Dutch link, but I’m still cool with RB.

Thanks very much for your time Sven, and best of luck with SB-Events and the future!