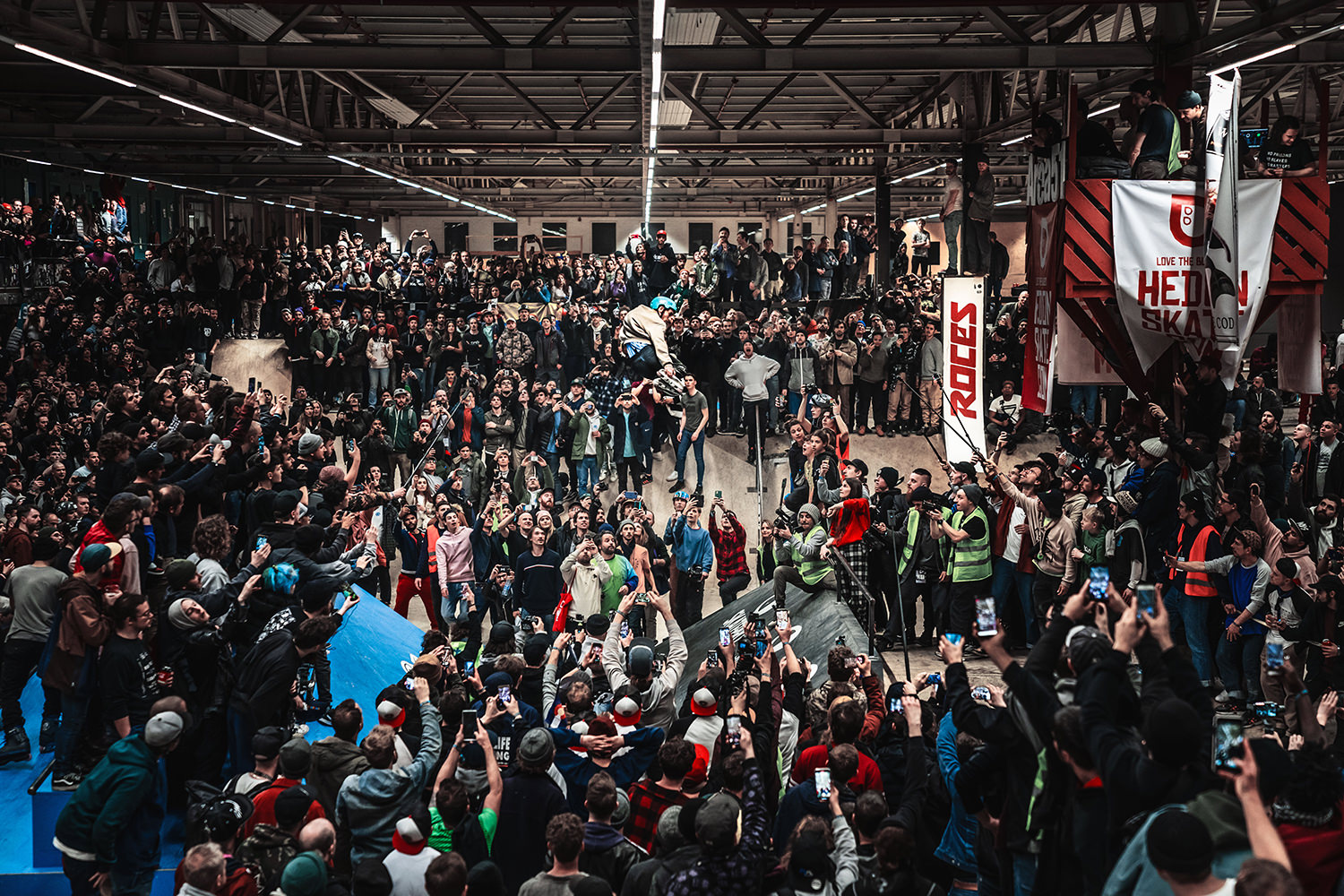 IN THE BARREL OF WINTERCLASH | EVENT REPORT BY GREGER FLAK

There are two places integral to Winterclash: Area 51 and The Blue Collar Hotel. The former is self-explanatory. The latter isn’t obviously apparent until you’ve been in person. It’s a place to call home for a few days, has a theater for video debuts and talks, provides a meeting point besides the park itself (try finding anyone at the park at max capacity), and it has the good fortune of having a bar to fuel the shenanigans of skaters looking to eschew moderation and mingle with faces old and new. It turns out when the park goes dark, the Blue Collar Bar is lit. Where else are you going to see drunk rollerbladers on a bar top, tapping their toes, twisting and turning with a crowd goading them on to 80’s hair metal like this were a scene in Coyote Ugly. Europeans sure know how to get down!

What was more common at The Blue Collar was a more accessible space to sit down and swap stories with friends, catch up with compatriots, wave someone down without having to scream (as much). For me, getting to chat with Dave Paine outside of Blading Cup was a treat. I ran into Sean Darst just a few weeks since shooting his Be-Mag Them UK Tour feature. Then the unexpected tap on the shoulder—”Jonathan?” As I turn around, a medium built fellow with tuffs of facial hair shakes my hand. “Greger Flak, we talked on Instagram. Good to finally meet!” Pause——Who in the—”Oh right! Hey, good to meet you too!” Greger had contacted me shortly after Blading Cup to shot for Winterclash, though I became aware of his work after he posted several light painting portraits around the same time. The conversations via DM since then were all photo[shop] talk, gear, blading. Things you expect to hear from bladers with cameras.

I hadn’t expected to meet him—rather I was taken by surprise to meet him in person. When you talk someone online who’s across the ocean, it doesn’t click that you’ll just ‘run’ into them. This isn’t like going for milk at the store where you run into one of crew. Social media makes the world that much smaller and it is still amazing to connect a name to a face on a planet that’s 24,000 miles across.

An hour off to the side, we were a duo of photographers imbibing and chatting about life behind the lens. In typical fashion, each decide to throw in some soul stealing. Greger took several of me at the bar, I dragged him off to a sit in some theater seating. Last call came and went, leading us to all meander to our respective temporary tenements.

You go to the Blue Collar Hotel for a drink and you leave having met someone whose avatar you’ve interacted with with some regularity. Digital life and real time converge for an instant. We need more of those moments in life.