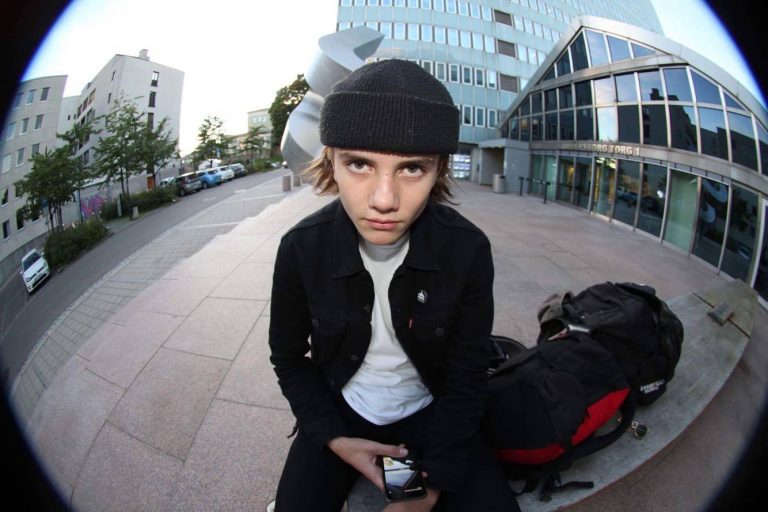 IN THE KNOW & SECTION: MARTIN DANNING

Martin Danning is one of the young guns of the European scene, with a level-headed outlook on rollerblading. That’s why we decided to feature him in our In the know section, and along with the interview, we’re featuring his section, shot and cut by Alex Francisco. 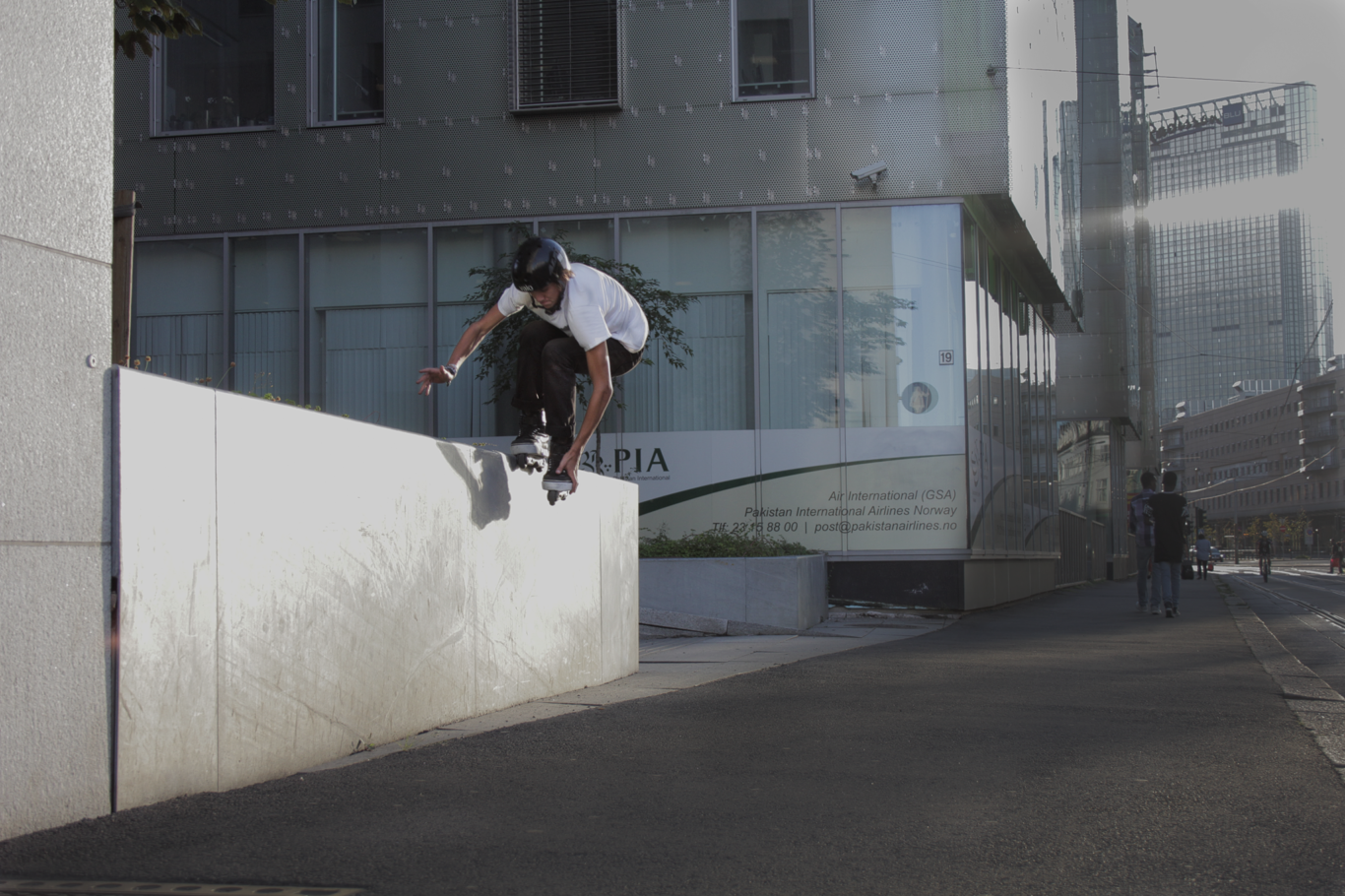 So, you’re relatively new to the blading scene. In this day and age, how did you learn about rollerblading?
Yo! I started learning about rollerblading the summer of 2008. My brother’s best friend’S brother was the Norwegian champion at the time. So one summer, my brother came home with a pair of k2 fatty pro`s, and since I`m the younger one I always want to be as good as my older brothers. So I picked up a pair of normal rollerblades, removed the middle wheels and shredded on them for about half a year before my birthday came up. All I wanted for my birthday was money (kind of strange for an 8 year old). I got enough money to buy myself some k2 fatty pro`s as well. Skated on them for about a year and filmed this funny edit, made by my brother (https://www.youtube.com/watch?v=gJgvvZ9RIxk

Are your parents supportice of your blading?
Oh! I`m glad you brought this up! My parents are the best. They are super supportive! Wouldn’t have done this interview without their support. They have done so much for me and the rest of my family. I usually travel with my dad, and that’s really cool. All the owners of my sponsors know my dad. He is not all over me at the competitions you know, he lets me do my own thing and he stands in his corner if I need him. I don’t usually travel with my mom, but she helps out just as much as my dad. I wish I could travel with them both sometime soon. But all in all, it’s an teamwork effort. 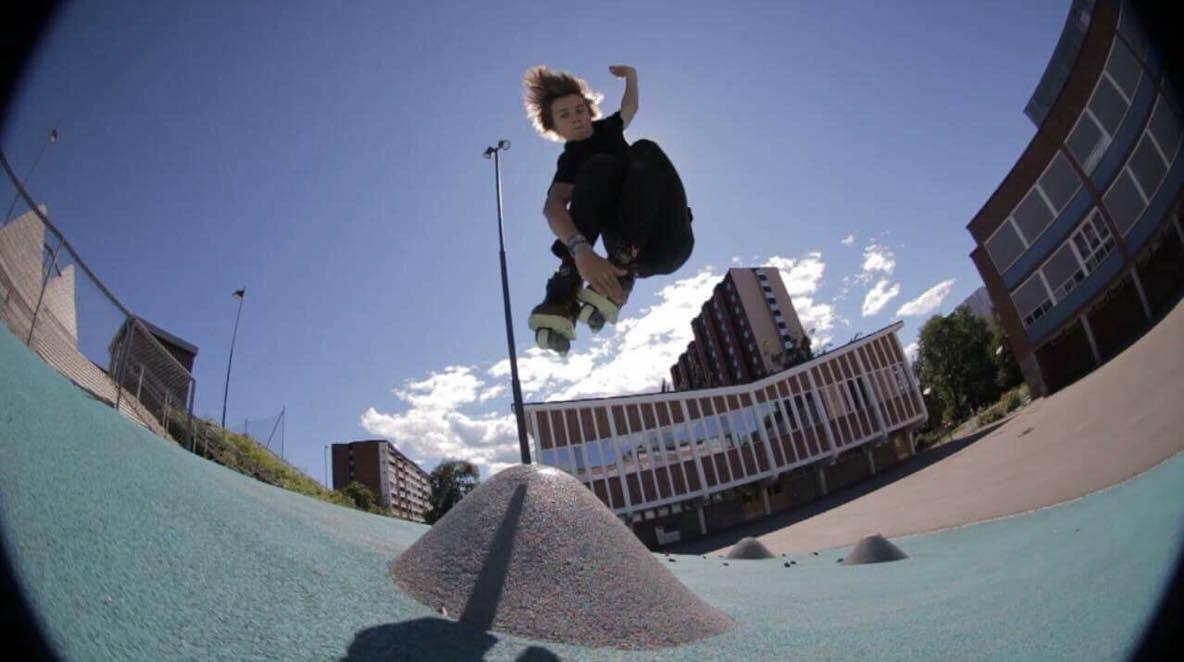 How about the older dudes in the scene, who do you look up to the most?
I have always been inspired by the boss Julio. Everything he does for blading is so inspiring to me. He has some of the most memorable parts, made his own brand, has a family and even organizes events. He is the best. I have been blessed to get free skates from him the last two years. I am very thankful for what he does. Other than that, it has to be Miguel Ramos and Robbie Pits with their positive minds. In Norway tough, Olav Norheim has always been cool in my eyes. I was suuuper terrified of him when I was younger. He was skating so fast and screamed really loud when he slammed. I found that super scary when I was younger. We are good friends now, we usually see each other once a week or so. I still move away when I comes towards me haha.

Being from Norway, that has more than a few indoor skateparks, do you thinks it helps to keep you blading in the winter months?
It definitely helps, at least for me. Once I start getting tired of the same park, I usually start doing stuff I never thought of earlier. Like going back to the basic tricks. It is easy to get sort of a depression during the cold and dark winter. It sucks, but I guess that’s something I have to go through until im 19-20 and can move to a warmer place. 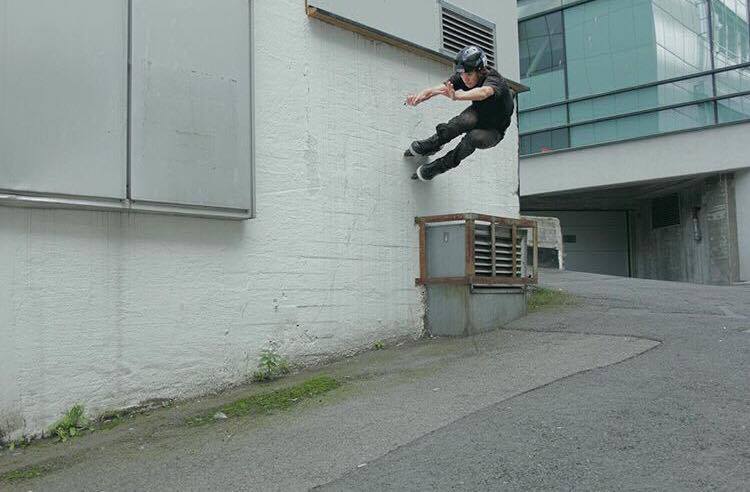 Right now, what is your biggest challenge in blading?
My biggest challenge right now is to get through the winter haha. But to be honest is it to be happy with my own skating. I don’t feel any pressure from the scene but I always put pressure on myself. It can be a good thing, but can also suck really bad. landing a trick 10-20 times and still not being happy with it can takes it tall. I don’t really care all that much about impressing others anymore, I just want to be happy with my own skating. My thoughts on blading has change so much the last year. Other than that, do I really want to make a name for myself outside of Europe. Really wish that I got sent on trips and stuff like that, but I guess I`m “to young”..

You’re really young, when you consider the average age of a blader. Almost two decades ago, up to ten years ago, it was fairly common to become pro at your age. Do you think you have what it takes, or is it even your goal to try and become pro?
Haha, I don’t think that I necessary have what it takes to be a pro, but hopefully in the future. I don’t want to go pro before I feel like I deserve it myself. At the same time, I do like the aspect of turning pro at a young age, rather than turning pro/getting your first pro boot when you are 30. That’s just stupid if you ask me. I have seen/heard of numerus people turning pro in their late twenties-early thirties when they have slowed down on skating. I think that getting younger pros traveling around could really help getting more people on blades as well. Seeing a bunch of 30 year olds smoking and drinking at a skatepark doesn’t really inspire many kids to strap on a pair of blades. I am sure that watching 15-30 year olds having fun on a pair of blades is inspiring no matter how you use them! I do have a goal of turning pro tough, that’s for sure!

With so much infrastructure, do you see most kids picking up skateboarding or scooter-riding?
I definitely see more kids riding scooter or a skateboard. The skateboard thing is probably because its more socially accepted and sort of a “merchandise” people wear these days (aka posers). I don’t mind people riding whatever they want. Of course would I rather see them on a pair of blades, but who am I to tell them what they should do with their life? Same with the helmet. I wear a helmet, but I don’t go around and push other people to wear one. Let people do whatever they want to do.

What made you pick up blading instead of the other two sports?
Hmm, I don’t know. It was more high speed, spectacular, difficult right out of the box. I also wanted to do something different so I just stuck with it and fell in love!

Do you have a favourite blader and who is it?
Its hard to say! But the first guy that I noticed was David Sizemore! He is still my biggest inspiration. I remember sending him messages on facebook when I was ten years old haha! We are pretty good friends now, that’s pretty crazy and surreal to think about haha! I also have to mention Adam Brierley. His high speed, trick vocabulary and general style really gets my intention. I can’t forget Alex Broskow, Mike Lilly, JJ, all of the thee strange boys… theres a lot of them haha! But to narrow it down to two, does it have to be David and Adam.

Have you seen any of the rollerblading videos made in the nineties?
I`ve seen a couple. Not really my favorite, but there are some good ones. Dustin Latimer`s part in “smell the glove” is so fast and raw. Super good video! Jon Elliott`s part in “what do you believe in” is also very good. Always gets me stoked. I believe its from 2000 or so (the year I was born haha). But the power and rawness is so good in that part. I think I have seen sections/parts of most of the old videos but nothing really sticks to my mind.

Is it hard to keep blading when there’s not many kids your age doing it, or do you have crew of peers?
Wouldn’t say its hard but its easy to feel lonely. Kinda sucks being young, wanting to go skate all the time while most of the other guys in the scene has kids, work and family stuff to do. But I guess that’s just something I have to deal with. At the same time do I have a lot of good buddies that skateboard, ridesscooters and a few on a bmx so it isn’t soo bad. 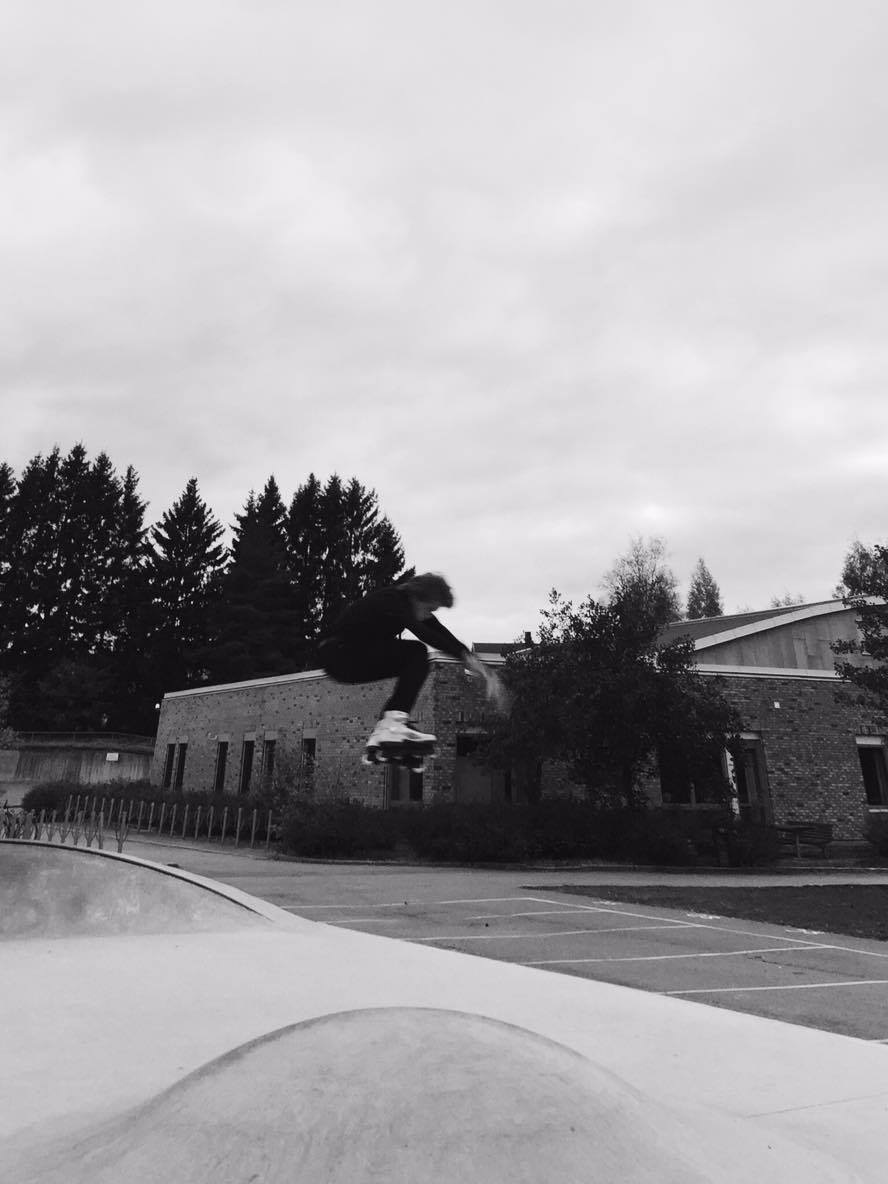 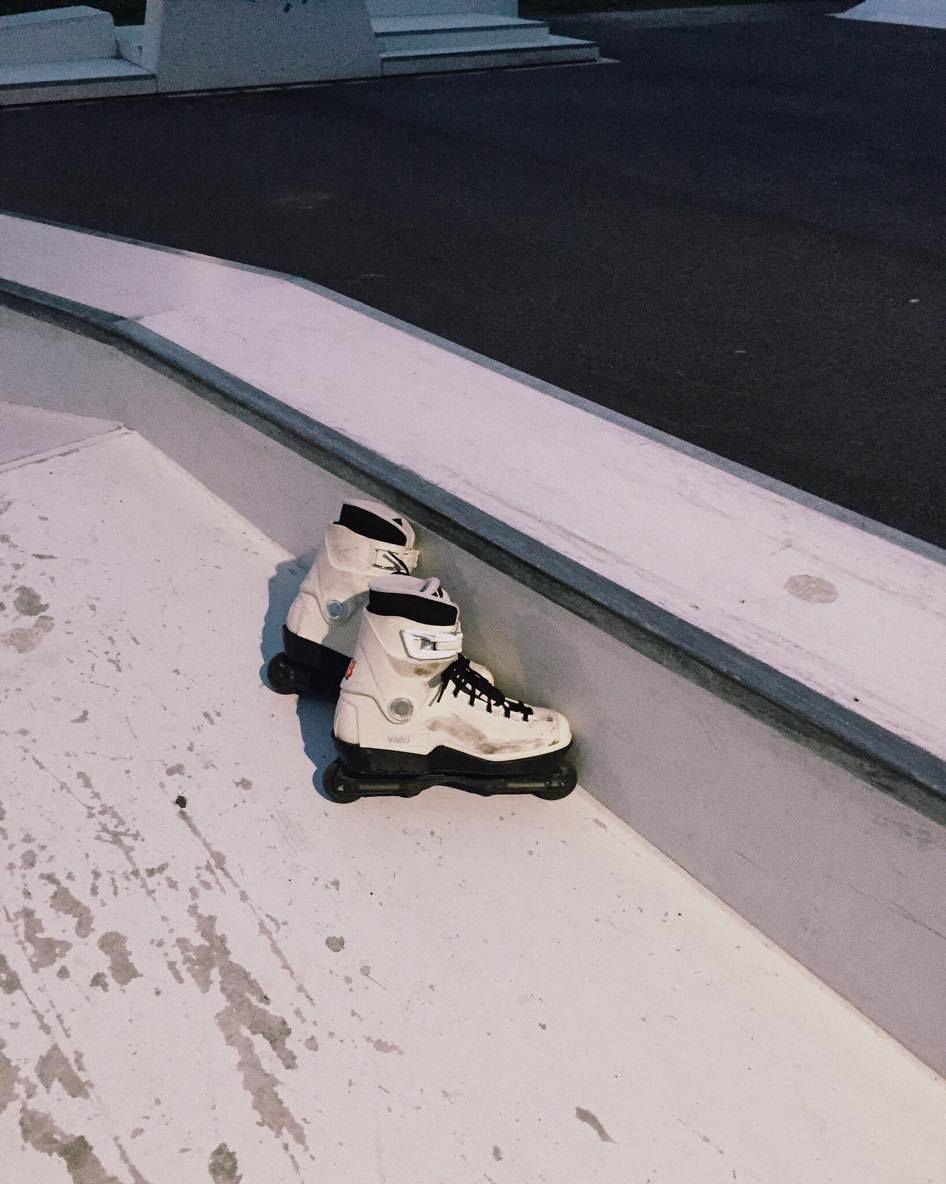 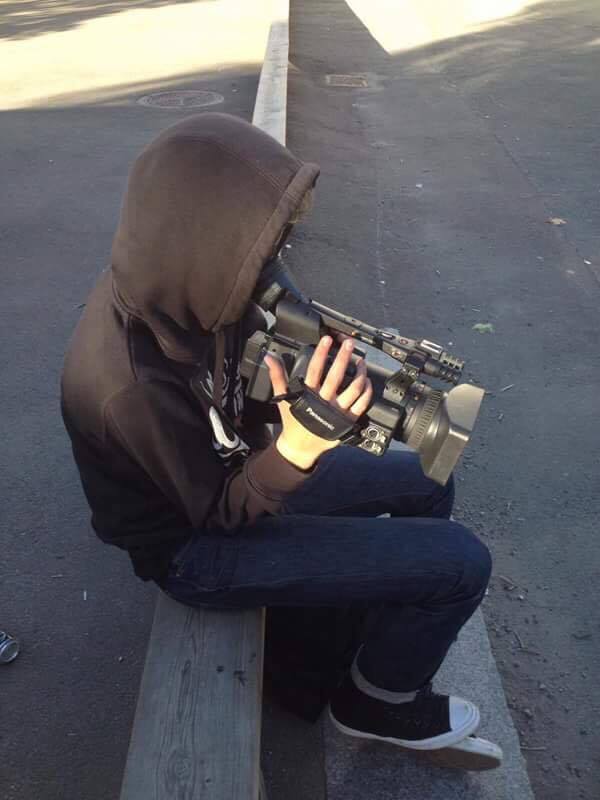 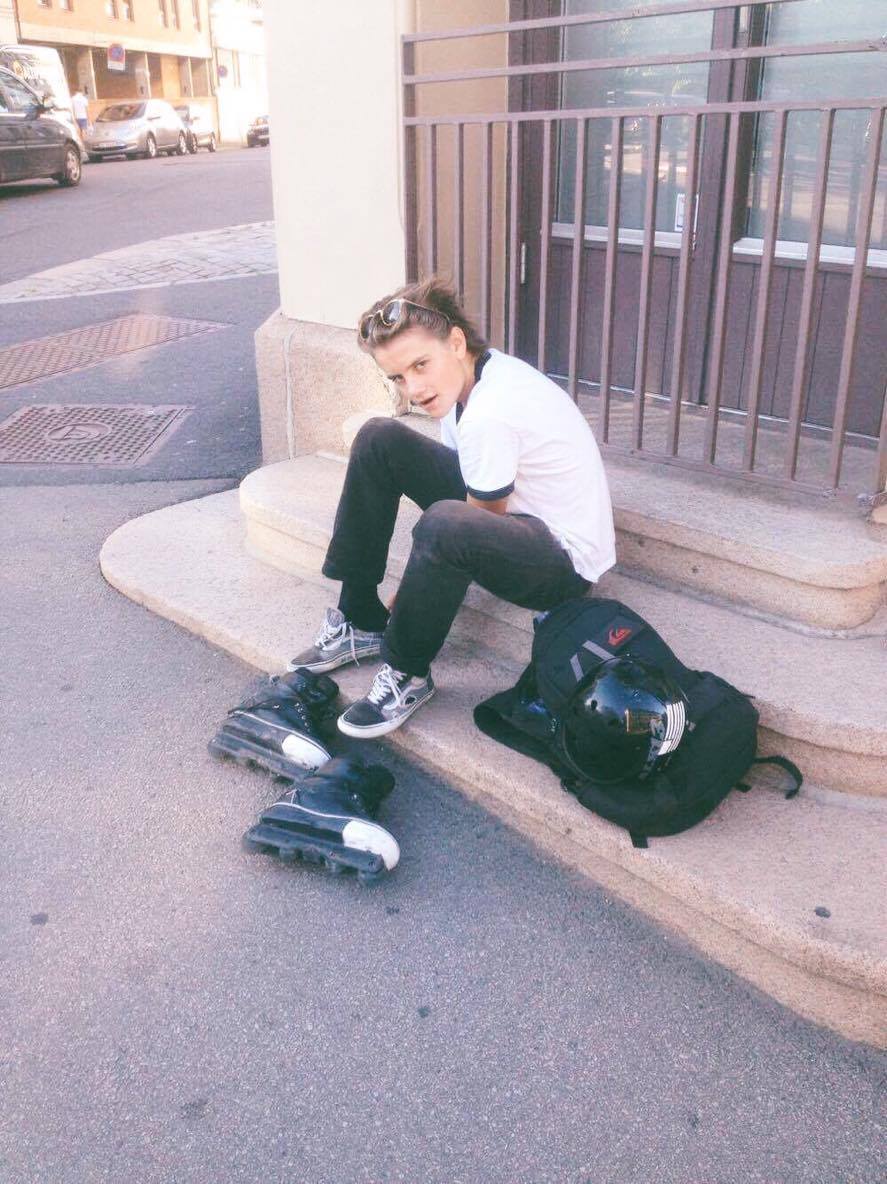