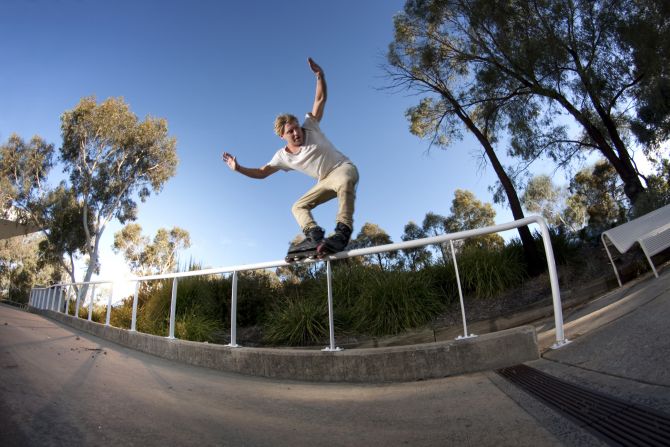 In the Know: CJ Wellsmore

lieutenant shinysides: Have you looked at any other boot sponsors? It doesn’t seem like Remedyz is getting you where you need to be in the sport.

I was really hoping Remz would be able to get me to comps around the world to progress in what I love to do most, which is to compete. Unfortunately that wasn’t the case due to me living in Australia. I’ve decided to search for a company that will have the funds to help me. Kato and I still have a great friendship and will do so for a long time to come.

bobgross: If you could have one person film and edit a full section of you, who would it be?

Dom West for sure. He seems to know every trick I am possible of and what trick I could and should do on different spots. I think he knows my skating better then me.

bobgross: What tricks do you wish you could do (or do better)?

I wish I could do true macs properly. I feel as though it’s a blind huck for me. I also had a bad experience where I absolutely ate shit on a tiny ledge.

chancy: How old were you when you started skating?

I started skating when I was 6. I got Roces Romes, my first aggressive skates when I was 7. My brother and I have a skiing background so when we moved away from the snow my dad got us rollerblades. We used them to bomb hills as if we were on skis. Not long after that we found out that it’s endless with what you can do with blades on.

Such a hard decision. Tits… No, ass! Fuck! Both…

Reshes, of course. You will have to come to Australia to experience it for yourself.

rollerbreaker003: Who was one professional skater that you jocked when you were a youth?

I’d have to say Matt Salerno. I’ve never seen someone pump a park as fast and as stylish as him. Not to mention the steeze in every trick he did.

tonyrivituso: Can you tell us about the impact that Mark Wojda has had on your life?

Hahaha Tony, I guess I’ll give a little to this one. Marks name was thrown around a fair bit in Australia. Basically when we would see a hot girl my friends and I would say “Would ya?”, meaning would you do shit with her. Then we started realizing that they would pick up on what we were saying so we made a code word which was “Mark”, as in Mark Wouldya. Well, at least that’s what we thought his name was. From then on we used Mark as marking a girl as hot. I hope I don’t get in trouble from my girlfriend for this…

Hans Hockey: Why is it I never see you at contests? Damn shame no CJ Wellsmore at the Winterclash?

Winterclash is one contest that I’ve been wanting to go to for so long. Last year I tried to save up money to go though living is fucking expensive. Especially when your so dedicated to skating and not slavering away at work. Next year for sure!

i.is.marsh: What does your daily life usually consist of?

I work for a company which is calles ‘Skater HQ’. Throughout the week I’ll travel to different schools teaching high school kids how to rollerblade and skateboard. Pretty rewarding job that’s for sure.

FISE. No doubt. Such a great vibe!

RollingDist46Sweden: What events are you looking to attend this year?

BCSD, Winterclash, FISE etc.? Any! All I want is to be able to represent a company that I like and to be able to compete in competitions and skate spots that I’ve dreamt about. Not to mention the awesome people and friendships that come with the industry we love.

Boris from Russia: What’s your favorite contest format and why?

I’d have to say open jam sessions are my favorite. Mainly because in a run, if you fuck up once it pretty well throws your whole line up. Also runs are way too tiring.

Music plays a big impact in my life. I think as rollerbladers we hear so many different genres. Five off the top of my head, in the mood I’m in are as follows:

Muppet4Eternity: What’s your favorite song of all time?

Too many favorite songs! Sorry I’d regret telling you just one.

denialchild45: What do you think of mega ramp skating? Is that something you want to try?

Definitely! Whenever I see footage of someone skating a mega ramp I get tingles. It is something that I want and I need to feel before my body stops letting me roll anymore.

chimbaktu: Since you are cervical challenged, are illusions impossible? Or is every trick considered an illusion?

Haha, I’ll pay this one.

How many exhibits would Xzibit exhibit if Xzibit could exhibit exhibits?

denialchil45: Favorite skate of all time?

No shit! I just got sent some Carbons and there is no denying that they are sex on your feet. That is all.

Chris TK4S: What is your favorite old video?

Chris TK4S: Who is your favorite skater to watch?

I’m with the masses, Brosky is an eye opener for sure. However perfection isn’t everything. I think that if someone is giving their everything it’s powerful to watch. It also makes rollerblading look real. Because what we do is hard and real.

Chris TK4S: Obviously we didn’t see an edit of you but was that WRS ‘Uploaded’ edit contest something that you were interested in being involved in?

I would have loved to put an edit in the comp. Unfortunately at the time I didn’t have anyone to film with me. I managed to save up some money to buy a camera for myself after so I’m now able to get some footage. Be warned, Craig Brocklehurst isn’t a videographer nor am I an editor.

ChrisTK4S: We know you like to bodyboard but are there any other sports you enjoy playing or watching?

For sure! I’m a very active person. If I’m not skating I’m either surfing, playing football/soccer with my new French connection, or getting into some sort of dangerous activity. Fishing off cliff faces or getting amongst the danger snorkeling.

Monday: Will we see you hooking up with another boot company… soon?

FSTF Roller: Would you like to take Haffey on in B.L.A.D.E.?

I really love what Haffey is doing and I’d love to be a part of it. There are a lot of obstacles I wouldn’t want to play Chris on but maybe I’d give him a run for his money on Bondi bowl.

FSTF Roller: What have you learned since you got older?

I think maturity is playing a powerful factor with me getting older. With blading, I appreciate every opportunity I get whether it be traveling or meeting new people. I’d say as I’ve gotten older I look at these experiences as being something that I can hold onto for the rest of my life. We are in an industry that differentiates us from general society so we should take it all in.

Muppet4Eternity: Are you a morning or night person?

Muppet4Eternity: What is usually your first thought when you wake up?

Muppet4Eternity: Ever been addicted to a video/computer game? Which one(s)?

Muppet4Eternity: Which bad habits, if any, drive you crazy?

Muppet4Eternity: What’s your favorite thing to do on a Saturday night?

Muppet4Eternity: What’s your favorite thing to do on a Sunday afternoon?

Check out how it all started here. Also keep an eye on Be-Mag for more content/news/announcements regarding CJ in the near future!