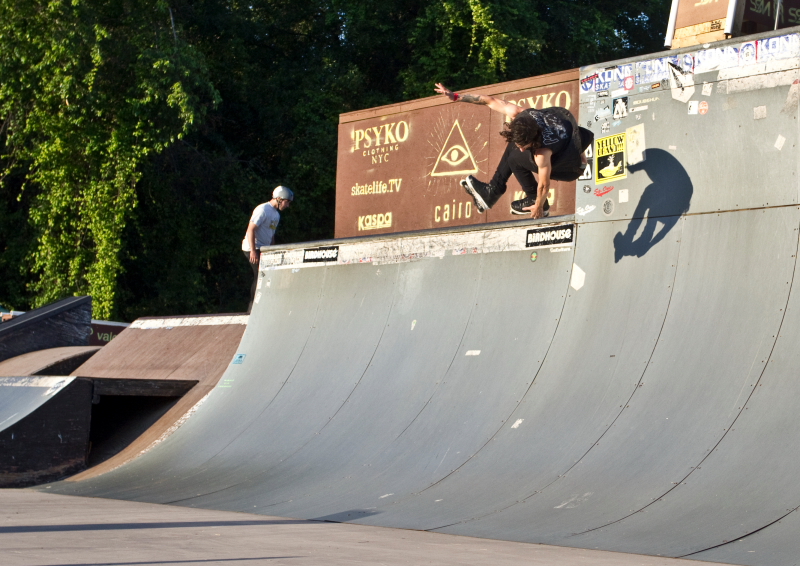 Interview: Blake Taylor about the Pow-wow

All pictures by Corey Oringderff

Hey Blake. In case some people don’t know, what exactly the Pow-Wow is about and how many years you’re running it already?
Hey Jojo, thanks for the platform to promote the event. The Pow-wow is entering it’s 7th year as Southeastern United State’s longest running, and largest freestyle in-line skate contest.

After the announcement that there won’t be a Bittercold next year, loads of people wrote that Pow-Wow would be the next big thing. Can you feel that more people are interested in your event already? Are you even ambitious to make it that big?
Ha, yeah I’ve been getting a lot of that “heir to the throne” talk. It’s been a somewhat typical year for planning because the BCSD was still the marquee event in 2013. Pow-wow sponsor commitments have always been secondary to BCSD.
At one time I wanted the Pow-wow to be the premier event in the US but I kind of got used to the #2 spot. It allowed me to take a more loose approach to the event, and relieved a lot of the pressure of expectations. I now find it somewhat funny that in 2014, we should be the premier US event. The NY Invite, and Blade Cup are on the come up though. So maybe we will keep that #2 spot, ha.

“I was not too surprised DK decided to Seinfeld Out”

From our communications, I was not too surprised DK decided to “Seinfeld Out.” It made sense to go out on top. He is an innovator, and has his hand in a bit of everything, including the Pow-wow. So I’m looking forward to seeing what he’s got up his sleeve next.

Jon Bolino, 720 & Soul up to Farside AO Soul down. We know Jon was holding out for the Pro/Am event while making us ogle his prowess over the park. Unfortunately he banged up his ankle during his opening run on Saturday night. We still had the pleasure of watching him shred hard for 2 solid days.

For those who didn’t watch the edits, can you give a short recap of what happened at the Pow-Wow 2012?
Last year’s Pow-wow was a jam packed weekend full of skating, and sun. We introduced our uniquely formatted, $1000 Best Trick Contest on Friday night. The initial installment started proper with Mark Wojda taking the $1000 on his last try of the night, landing a massive 540. If he had not landed the judges had a 4 way tie.

Saturday we skated Kona all day through out the qualifier divisions and brought the evening in with the Pro/AM division. David Sizemore solidified his title as “Chief Pow-wow” winning his 3rd Pow-wow. 2nd in row. It was so much more than just a contest though. Ever since we located to Kona, we have really taken the direction to encompass every skater and provide a chill atmosphere. We also had live band last year. That was awesome.

What was your personal highlight at last year’s event?
For me, the highlight of the event is being immersed in the scene and just watching all the personalities interact. Seeing old friends, and making new ones. I really try to be one step ahead with planning months in advance so that I can take it all in during the event. For me, it’s a weekend vacation from the real world doing what I love, skating.

Mike Lilly, 720 up & Vertical Soul Stall. We hope last year was a sign of things to come because Lilly had a strong showing in ’12

What’s planned for this year? What will be different to last year?
Since we started holding the event at Kona in 2011 we added 3 new divisions which will continue; the Women’s Open, Under 18, and the 25 and Up qualifier. Last year we added the successful, $1000 Best Trick contest. Of course we’ll have the main event, the Pro/AM and the amateur qualifier. The only thing new is that we added a Women’s $500 Best trick.

Being our 3rd year at Kona we are learning the ropes. Kona has been doing this a long time so there is no much I can throw at them that they have not already seen in their +30 years in operation. The best part about Kona, is that we have some many different options for terrain. So once something gets played, we can just switch it up. You may see a few of those twists this year.
After last year’s event wrapped up, I realized that was going to be a tough one beat. The formula is there, now it’s time to refine what works, and trim off what doesn’t.

David Sizemore, Top Mistrial line in the Best Trick contest. David was farting around on Friday, holdin’ out for Saturday. He still managed to get this nice pic.

Are there going to be new park additions?
We always have new park additions thanks to our sponsors. It would be hard to keep things fresh with out them. The thing is we’ve been building the “exclusive sponsored” obstacles for so many year’s we’ve amassed an arsenal. So in form with this year’s theme, we are going to refine those too. Expect to see familiar obstacles in new locations. Look close though because you may not recognize them.

In addition to the usual obstacle’s Pow-wow attendees have grow to love, expect some new ones too. We basically have 2 skateparks to fill. Last I counted, we’ll have 12-16 obstacles added to the park. That’s a lot of advertising space for the prospective sponsors that are reading…

On your website it says, “PRO/AM invite only”. Can you please explain what that means? Can everybody compete?
The Pow-wow’s main goal is to get everyone on their skates at some point during the weekend. This is why we added so many divisions. We have a division for everyone to compete, and everyone is welcome to compete regardless of receiving an “invite.”
Although we take a loose approach to running the event, we take the actual contest seriously. This is why the Pro/AM division is “invite only.” The Pow-wow Chiefs are a short list of some the best skaters in North America, and we want to continue that tradition.

The invite is sent to nearly 100 North American skaters who we feel are currently relevant. From WRS Pros to AMs shredding it up on the internet and everyone in between, the invite is our way of showing appreciation to those skaters that are really bringing something unique to skating. We feel the least we could do for them is put a respectable prize pool up for grabs.

However, only 31 of the invited competitors will actually get into the Pro/AM division with out having to qualify the day of in the Am qually. We have an order of precedence to decide the 31 but that could be thrown off depending on who enters. We take into account your entire body of work whether North American or not. The “invite” does not guarantee a spot in the Pro/AM but does guarantee a spot in the $1000 Best Trick on Friday night. It’s not an exact science, we just want to make sure the skaters putting in the work are getting their deserved respect.

Can you confirm some big names already?
I don’t like confirm any names until they have officially registered. I will say, inquiry traffic is up. We received unofficial confirmation from people all over the country, and beyond. The Pow-wow has it’s regulars, and that seems to be growing each year. We are expecting record attendance.

The girl’s competition is also growing every year. Are you expecting some bladies to show up again?
We realized if we were going to encompass all skaters, we needed to add a Women’s Division. This will be the 3rd year, and we have grown, and refined the division each year. Now referred to as the Women’s Open we hope to see some the best female skaters the US has to offer.

We are also excited to announce we’ve added a second division for ladies. On Friday night along with the men’s Best Trick contest, we will also hold a women’s $500 version.

Julian Bah, Backslide. Just warming up for his backslide up 450 gap off on the Amall box in the finals

Is there going to be a tradeshow?
We kind of moved on from having an allotted time for a tradeshow. We have so much skating to get through that it would be hard to fit in. Since the event is outdoors, there is a strong need for shade. Attendees will quickly find out why Florida is called the “Sunshine” state.

As one of our sponsor packages, we offer 10’x10′ tents not just to sponsors but any crew not wanting to deal with the hassle of purchase, set-up/ breakdown and storage. Purchased tents can be used for whatever purpose desired from Fri-Sat and will include 2 competitor passes. While most will set-up shop to sale their goods, others can use them to get out of the sun.

Are you organizing an after party? Or is there a bar where people usually gather after the competition?
As far as an after party goes, there is always extra curriculum activities through out the weekend. We always try to have something planned. Last year we tried to “out think” it and scheduled the after party venue at a Club that required a cover for entry, and all that entails.

We will most likely tone it down a bit to something more along the lines of a bar. As long as we have a central place that everyone is aware of, there’s no hassle with entry, and the beer is flowing, we’ll be all good. Nothing is set in stone yet though.

David Lang, Fishbrain stall on the 16′ high SSM stall to close out the comp. David’s anger would argue that it wasn’t locked but I believe I saw visual proof otherwise.

What about the sponsoring situation? Who supports this year’s Pow-Wow?
We are always looking to gain the interest of new sponsors which why we always have competitively priced package’s for our sponsors. To keep it simple, the package’s we have available are Exclusive Obstacle Ad space, and tents. Sponsorship information, and registration is available through our website.

Currently the event is sponsored by Aggressive Mall, Skatelife.tv, Bernal Heights Collective, and First & Lexington. More sponsors will be announced prior to the event.

For everyone who is not convinced already… Please give us some reasons to make the trip to the Pow-Wow 2013.
It’s simple, if you love skating, then you’ll love the Pow-wow. The atmosphere is relaxed, and there’s skating for everyone. Plus, if you never been to Kona, it should be your birth right as skater, even an in-line skater.

That’s it. Thanks for taking the time to do this. Any shout outs?
I would like to thank a lot of people actually but I’ll keep it short. Thank you to all the skaters that have attended, and thank you to all the individuals that have helped build the event to what it is today. You know who you are.

Mark Wojda, 540 from the concrete vert, for the win. At this point in the Best Trick event, this was Mark’s 5th and final try of the night and all of the other 29 competitors had gone through their 5 attempts. If Mark had not landed, the judges were torn between 4 different winners. The Best Trick contest couldn’t have initiated any better.

Steven Tat, Royale. Who knows at what point during this weekend was. I don’t think we saw Steven not skating hard at any moment through out the weekend. In fact we had to rip him off the street course to hand him his winnings.