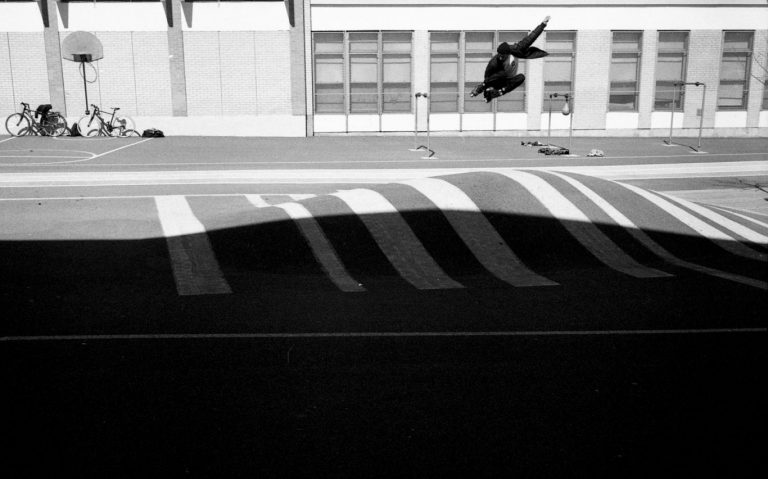 Charles Nantel is one the most passionate skaters I have ever met. When you are skating beside him you can sense the drive and determination he places in completing and revising tricks. He has played a key role in the Canadian rollerblading scene for the last twenty years by remaining active on and off his skates. Nantel has recently used his first camcorder to re-visits his current position with skating, a recovery from a severe concussion, and life-long friendships on wheels.

The pacing and focus of this assemblage are both quite different from most web profile we see, the lens that he uses to frame recent event plays an important role in generating that sense of nostalgia and comradery. I have taken a brief moment to catch up with Charles, to get a better sense of the approach he has fostered and intent for this last project. 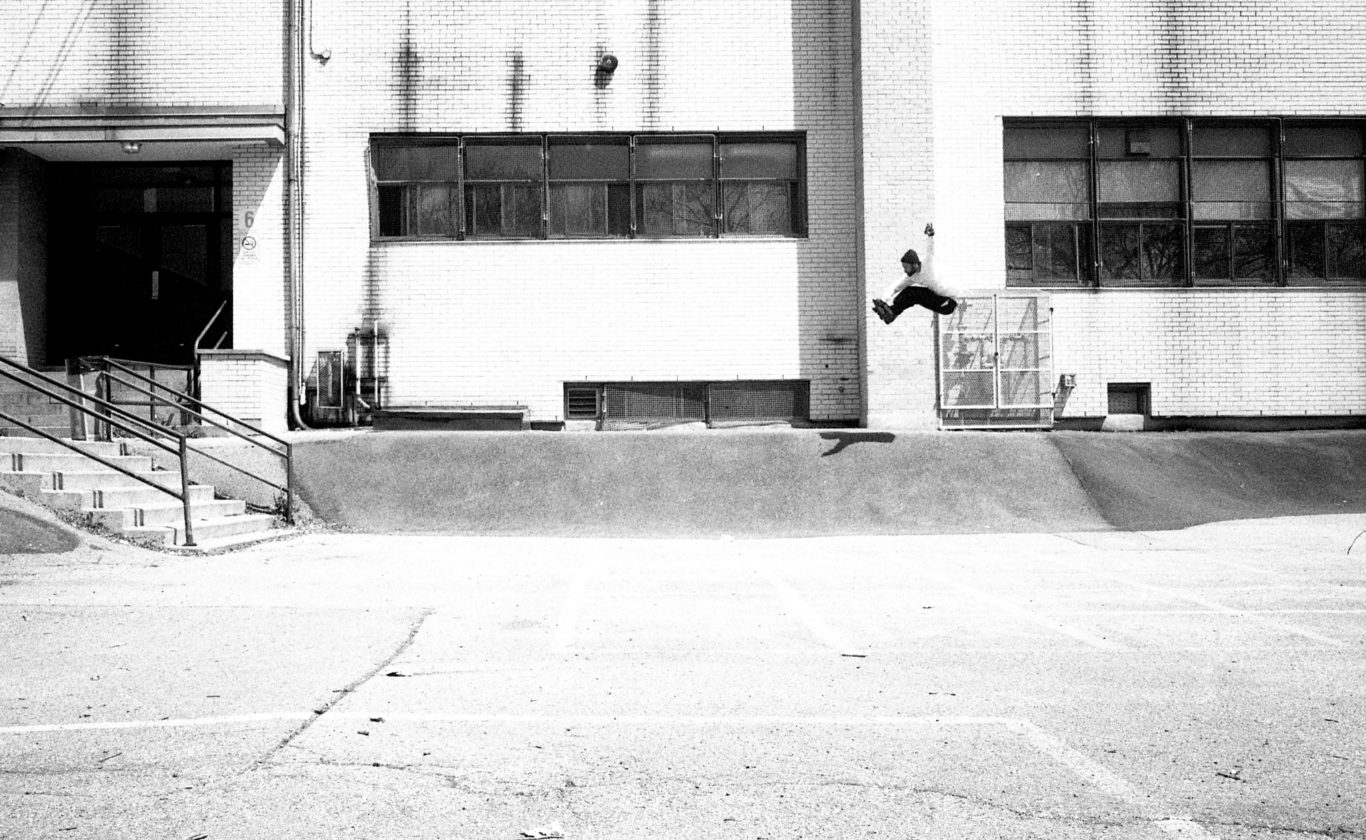 It was refreshing to see you skate that hard in this section, and with people (Kevin Lapierre and Guillaume Roy) that are close to you. Yeah, I always remembering you claiming that each summer will be your last – What changed for this summer and edit?
Within the last five years, I never really felt fully healed from my concussion. I have been skating for the last 20 years and I have always been a bit of geek for skate videos and edits. The reason why I decided to put more effort in this one, was to make a video that I can share with my friends. A video that we can look back on when we are 40 years olds, maybe when we might not be able to skate as hard. I also did this for myself, as I get older my endurance and body begins to slow done quite a bit, I also have more responsibilities to weigh in with skating. I really wanted to push this section so I can prove that I can skate at a good intensity. I just wanted to make something satisfying before I can’t do this any more.

Let’s talk about health and recovery, when I see you skate it reminds me that it takes a while to feel confident mentally and physically before you can trust your body to do what it’s supposed to do when you are skating. How did you make that choice that it was time?

Oh it was clear, at the beginning summer I realized I rarely skated for the last two year and between that time I might have skated about ten times. I thought it was about time to condition myself and find my footing on my skates, and once that was done I had to push my body to see what my limit would be. You know, I am 37 now and it would have been easy for me to stop skating, most of my friends stopped skating, they started families, they are also preoccupied with their careers and skating doesn’t work or they don’t have this common interest in their lives. I have a job that depends on me being healthy, I don’t have any interest in being injured but the main reason why I continue doing this is because of the passion, because I have alway done it and this passion for rollerblading has never left.

Your first camcorder, it’s quite interesting to see you revisit and use this tool to document your skating this summer, mostly because I assume this specific camera played a key role in shaping your career as a rollerblader. I am wondering if you started filming with your first camcorder, thinking it would be a catalyst for the project?
Once I was fully recovered, I began researching which cameras I wanted to use to start filming again. I wasn’t sure if I wanted a DSLR or HD camcorder again, one of the main reasons was that most of the skaters in Quebec city were starting to slow down with skating. I wasn’t sure if it was a good idea to invest in a new setup to just film my own clips. So I asked my sister if my first camcorder was still at my father’s place and it was, so I decided to go with this setup. It was also quite nostalgic to look at my skating now with the lens that I used when I first started skating – it was really amazing because it would bring me back to old memories each time I would use this camera.

The first session I shot with it was with Guillaume and Kevin, right after that I knew I wanted to produce a project that was less about being a profile but an edit that included skating from my friends to share those good moments and valuable memories with them. Especially with Guillaume and Kevin because we have worked on projects in the past. On another note, our age difference is quite interesting since I am about eight years older than Guillaume and he is about six years older than Kevin I’m always surprised how well we all got along despite that. On top of that we live in three different cities, so each time we skate together it’s always a good time. This entire project was focused on making a video that I can look back at and remember those days we spent skating during this particular summer, I just wanted to have a video to share the fun we had skating together. 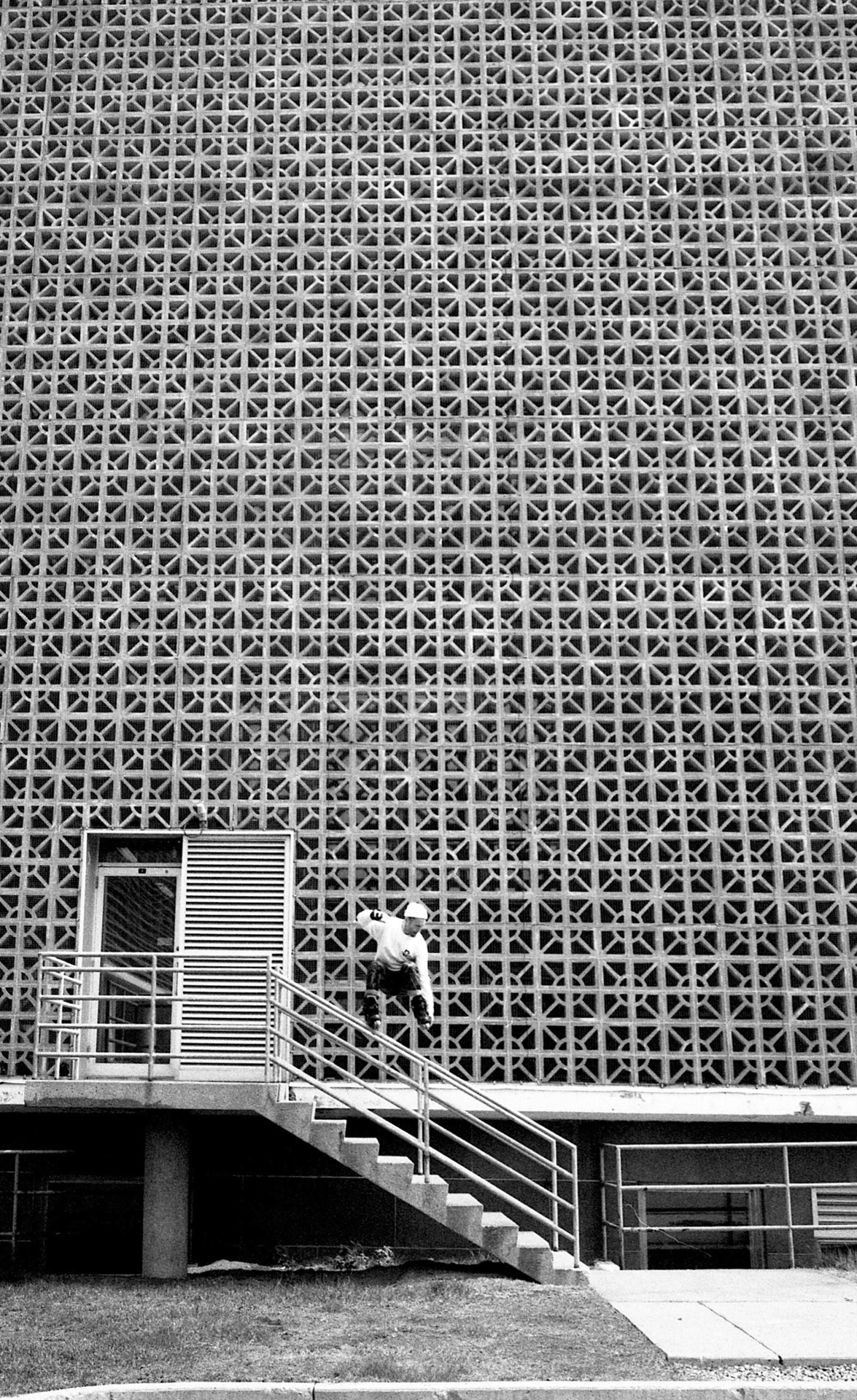 I’ve been watching edits lately and for some reason, I’ve been thinking about the behinds the scene detail that might have an impact on a section such as a skater’s day job, their city’s climate, time constraints, or health conditions. Did you have any strategies devised to get the clips you wanted? What about spot selection?
Well, when we watch sections we don’t think about that. Generally, a skater in their early twenties might be a student who has the summer off without a full-time job or girlfriend. Now we are in our mid-thirties and we have more responsibilities that make our time to skate precious, it has a different value and that places some stress on ideal weather, spots, and having the right people there to skate and film with. Also, street skating takes quite a bit of time compared to casual park session, street sessions can take hours and you might not be able to get any clips that are usable.

I also find it a bit difficult skating and filming by myself, because I have to go from cold to fully motivated in a short amount of time to get my tricks done. That’s why I choose spots that are not the most dangerous, I make sure the chance of falling on my head is low, there are no gaps in my section. They are all tricks that I am really comfortable with. The alley-oop wallride was probably the only trick that I thought I could get hurt but I was confident with that one and I took the precautions with making sure the spot was ok and that I was comfortable. I only really do tricks that I know how to fall and catch myself. For me rollerblading aesthetics is very important, the trick has to appear visually pleasing for both your eyes and of those of the people around you. I would rather have tricks be simple, clean, stylish and solid over something complex and technical.

With social media and websites that focus on distributing rollerblading media at a rapid pace and accessible manner – What do you think has changed with how we value and consume this type media now, compared to when you were making edits with your first camcorder?
Today, everything is easy and accessible, everyone can make videos and watch videos easily. Our interests can fade easily. For example, if I watch an edit and there is nothing substantial within the first 15-20 seconds I’ll go to the next video. There is so much content right now, as a maker you have to be able to captivate the interest of your viewer quickly. Back in the day if Mindgame came out with a video, you would watch the video so many times that you would be able to remember the order of every single trick in the video – it had a different value that we would give it by re-watching and re-living each trick as a viewer.

It’s not only video, I used to remember iconic pictures from magazines, from skaters like Dustin and Julio and there was this sense of rarity with those images that made us remember the skaters and skating much differently from Instagram posts. Yeah, it’s scroll scroll, it’s not even an issue about quality and distribution because I believe our technology is even better now and the way we get images and video is just so rapid, it’s just matter of having too many edits from very talented skaters that can reshape and reduce that sense of value and rarity. 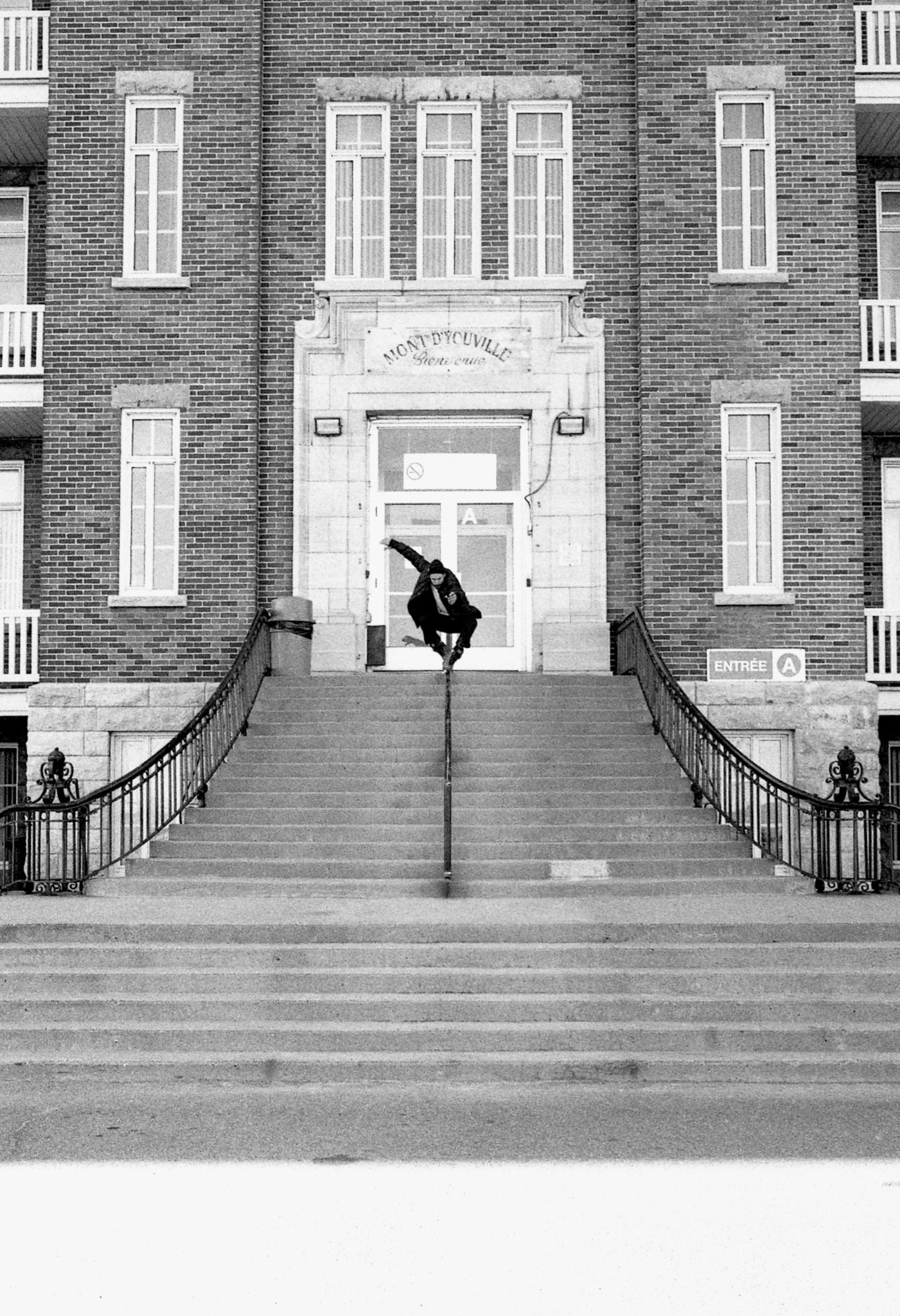 Thank you for doing this interview for us, are there any new projects we can expect from your next year?

Well, the season is done and it’s mostly hockey season. Until spring starts I will try to film clips here and there at parks. I am mostly interested in producing photographs next year, specifically with film because of the ephemeral quality it has.
When you are using a film camera you are unsure that the photo or skating will come out the way you remember it was at that moment. You only find out how that moment or image went when you develop it. It changes how you remember that moment because you can’t immediately revisit it or reflect on it onsite. Yeah, I have a couple of idea of photo series and video project for next summer, I also want to continue to support your wheel orangewheelcompany.com. Yeah, I want to thank Be-mag for this interview and PY, Guillaume Roy & Kevin Lapierre for making this last summer happen! 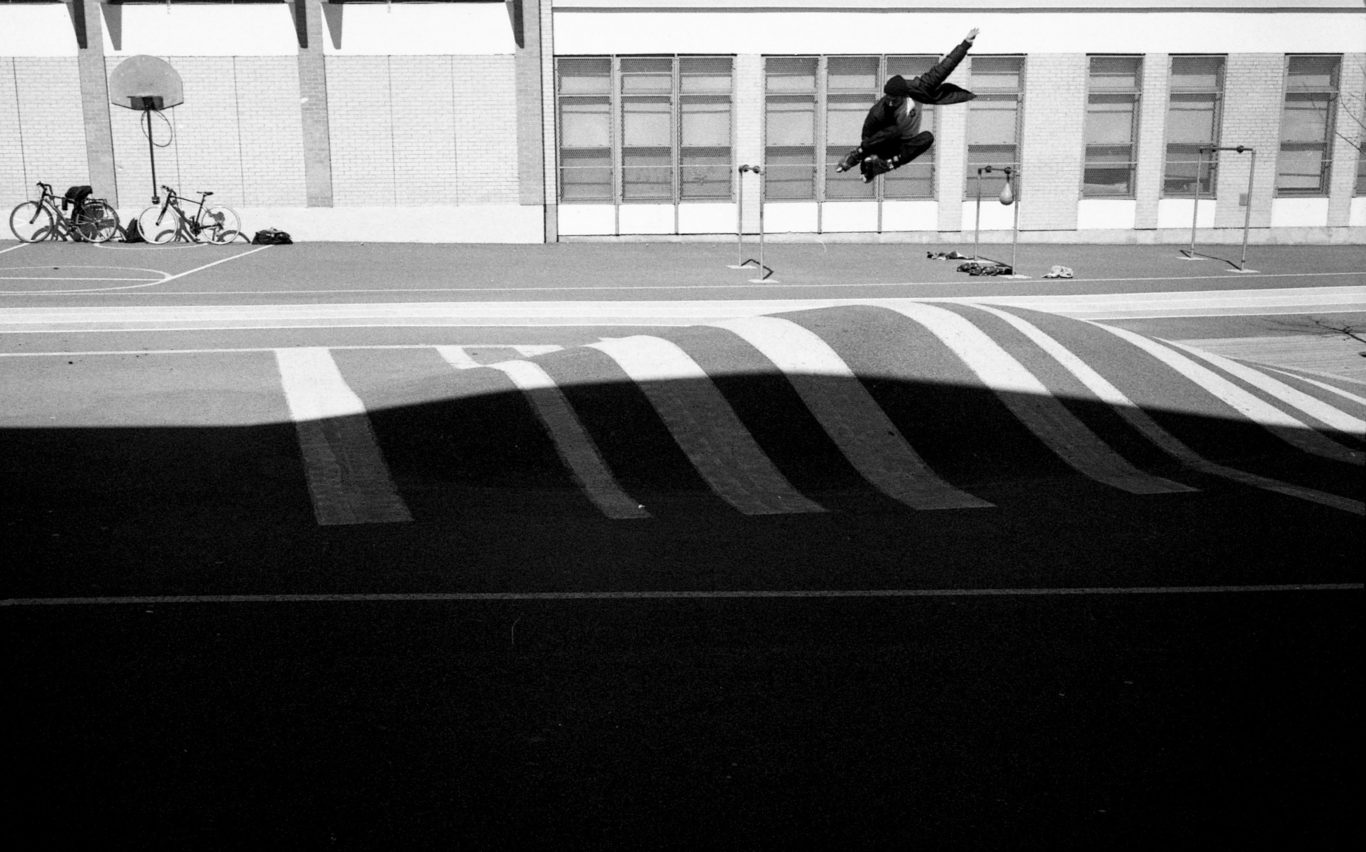