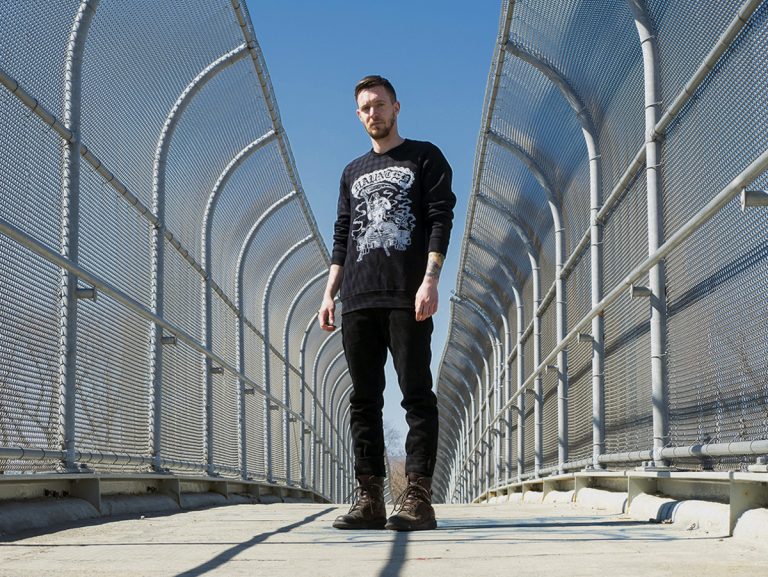 Nobody really expected Haunted wheels‘s first team video when it dropped earlier this year: Die High‘s trailer was released just as the video turned up on Sellfy, and the whole deal caught the blade world off guard. Even more so, when the first reviews started popping up on messageboards and everyone’s favorite social network, unanimously positive and giving high praise to the underdog.

The same phenomenon repeated itself when team rider Brian Weis’ own section was released online this morning: combine some great blading and original spots with the element of surprise, and you will see the positive comments and feedback roll in! After this first delivery, one can only assume the Haunted have finally gotten everyone’s attention for good. And raised a couple of questions too.

We caught up with the brand’s mastermind Matt Osantoski to know more about the process of making the video, and discussed what it is like to build a company from the ground up, who exactly is part of the adventure, Detroit’s 20 years of blade entrepreneurship, and what the world can expect from the Haunted in the future: read on, and maybe you will spare yourself the surprise next time!

Hey Matt, thanks for doing this with us! For those who don’t know you, could you please give our readers a short introduction about yourself?
My name is Matt Osantoski. I am 29 years old. I’ve been blading for 16 years. From Detroit, Michigan.

You are also at the head of Haunted Wheels. Can you tell us more about the company, how it started, and how it grew from there?
I started Haunted Wheel Co. in 2012 in Grand Rapids, Michigan. Hanging out with Adam Niemara, Scott Wygmans, and Tom Jenkins in GR is really what made me want to do something. Adam was doing LOWLIFE at the time, Scott was always drawing new comics, and Tom was screenprinting on everything. My little bro Brad was also across the state getting better everyday at all things video. Buncha homies doing cool shit and here I am with my thumb up my ass. I’m a blade nerd at heart and you can quiz be on anything 1999+ and I’ll tell you who skated to what song haha!
My brother and I have been filming skating for almost a decade, what better time to try and launch a skate brand? Bunch of boring logos out there, haven’t gotten juiced on a blade brand since Mindgame died. Now LOWLIFE died. Fuck it let’s launch Haunted. Worst that could happen is nobody cares. And it seems likes nobody cares about blading anyways. I give a shit though.

It seems like you do! Recently, you released Haunted wheels’ first team video online: Die High. How did the project start, and what’s the story behind it?
Yeah Die High just kind of happened. Nothing forced. Pretty much everyone on the squad was working on their profiles, and we decided why not try to make a full length movie with everyone’s clips.
I organized the Blue Collar Blade Tour with a bunch of my Michigan blader homies and went on a concrete park tour too. Got my brother and Ryan Cza to film the whole joint rad. Turned out so good, I figured we would put it in the flick too. Then VOD’s started popping off. I bought all of them. Pretty much felt like the quality of skating, editing, and filming was comparable if not better than most of the VOD’s available. So we did it. Everyone collaborated and dumped a shit ton of footage on Brad. We chopped it up in a movie that I am real proud to be a part of.

Sounds like a healthy, yet rather long process. How much time did it take to film the video? Who exactly has a section, and who was in charge of the filming & editing process?
Spent about a year and a half to film. Each section is different though: profiles from Mikey Blair, Cody Boulay, Shane Conn, Garret Mitschelen, myself, Cody Lampman, and Brian Weis. Shane Conn’s part was filmed by Cody Reffner, Ryan Parker, and Bruce Bales in and around Pittsburgh. I believe it was edited by Shane. Cody Lampman’s part was filmed and edited by Scumpire’s Ian Walker. Garret’s section was filmed by his San Diego homies, and edited by Brad Oz. The rest of the sections were mostly filmed by Brad, Brian Weis, Al Dolega, and myself, then edited by Brad and I.
The Blue Collar Blade Tour section features Michigan natives Gary Murphy, Don Bambrick, Ryan Grau, Sean Quinn, and a bunch more rippers. It was filmed by Ryan Cza, Ryan Grau, Don Bambrick and Brad. Edited by Us. 85% of the movie was Brad though. He did a killer fucking job, especially juggling all the clips from everyone and keeping a vibe throughout the movie.

The vibe seems to have gotten through, as many people spoke highly about this whole deal! Are you happy about the reception of Die High, and the feedback it has gotten so far? How many people have downloaded the movie as we speak?
So far the feedback has been good. No complaints is pretty incredible considering how rollerbladers love to talk shit on da internetz. I think we did awesome for trying to sell a digital download for a relatively new company, in a dying industry. Over one hundred players downloaded the movie thus far. Thanks for all the support dudes! It’s appreciated more than you know!

As you mentionned, you chose the option of releasing this one on VOD. For a smaller company like Haunted Wheels, don’t you think it can hinder the visibility of such a project, and thus global awareness about the brand, which used to be the goal for team videos?
Times have changed. Team videos rarely even come out anymore.

And do you think that maybe in the long run, you could have benefited from a free release?
Na. We have lots of free content and plan on continuing to make a bunch of onliners. The internetz ain’t goin nowhere.

You mentionned that the company was born in Michigan earlier, and in fact you are one of the rare companies based in the Midwest. Is this location important to you, and is there some kind of Six Won Six legacy that you want to keep going?
Location is real important. I am from here and wouldn’t even be able to keep doing Haunted if it wasn’t for the support of the Midwest homies. Buncha really good skaters here too. I think Detroit has one of the best skate scenes in the US right now, especially considering how good the younger generation is. Bunch of 18 year old Bambrick’s ripping the skatepark, making me feel old… Mark Vanderboegh from SWS had the longest lasting rollerblade accessory brand. Something like 20 years… Big shoes to fill.

Stood the test of time, for sure, and we wish you no different! Now that the video is out, and all is said and done, what is the next step for Haunted Wheels? Any plans or specific projects you can disclose to our readers?
Just released a small line of tees, crewnecks, and beanies to go with Brian Weis’ pro wheel. This summer, we’re planning on releasing another pro wheel to a Haunted rider who has been down since day 1. Gonna have to buy the video though to figure out who that is gonna be. Other than that just steady blading with the homies. I stepped up my video game this year so I’m juiced to be behind the cam more, filming and shooting photos. You can also follow Haunted on Instagram for regular updates and chill blading on the reg.

Any last words of wisdom, thank you’s or shoutouts?
Thanks to Freddy for the interview. Thanks to Adam Niemara, Scott Wygmans, and Tom Jenkins for being OG pilars. Thanks to Brad Osantoski for being committed and for helping me run Haunted. Thanks to all the players out there who ride the wheels, bought “DIE HIGH”, or have supported us in anyway. Rollerblading is grassroots as fuck right now, and has been evolving into somthing awesome for a minute. Can’t wait to see what the future holds.