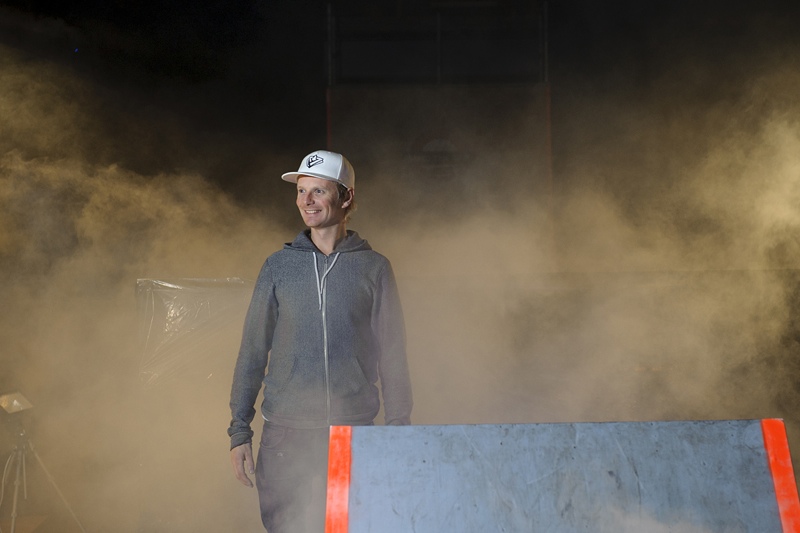 Sven Boekhorst is a name that most of us got to know through TV and magazines more then 10 years ago. The Rollerblade Pro traveled the world to compete in the biggest events that ever happened in blading – and won most of them. Today he is focussing on his own show company and is working on unique projects with his friends and partners. His new project „Blackout“ is again something we haven’t seen before. Sven took his time to talk with us about what exactly happened and how the whole thing came together.

Hey Sven, thanks for taking the time to do this with us. Where are you right now and what
were you doing before you started answering these?
Iʼm at home, behind my computer at the moment. Just got back from a family weekend with my
girlfriend. Her family came for the weekend from Poland to spend some time over here.

We will talk about your career and more stuff later on, but first please tell us a bit about
your new project. What’s the name and what can we expect?
Blackout — smoke machine, glow in the dark paint, motors, MTG setup, Cityhopper ramp.

Who is involved in the project and how did the whole idea come up?
The first idea was to make a cool WRS edit. We were brainstorming about some ideas of putting
the MTG setup at a special location. It was Randy Abels who finally got the idea to use the
location of the new indoor skatepark in my hometown. They just started building some obstacles
that we could use as well in the edit. From there we got more ideas about lights and smoke and at
the end we thought it would be cooler to make our own edit instead of giving our footage to the
WRS for a 1 minute edit.

Isn’t it strange to do tricks on big obstacles in the dark when there’s only weird light, and
the ramps are even glowing? Did you have to get used to it, or is it all the same in the end?
I guess the hardest thing to skate with was the smoke in combination with the light. I remember
when I was getting speed from the motor and was flying from the quarterpipe to a little rail we
had put on the 1st floor. I couldnʼt see the rail when I was taking off because of all the smoke in
the building and the darkness.

Your projects are always a bit special and unusual, compared to what else going on in
blading. It must be great to be able to realize whatever comes into your mind. What
sponsors were involved this time?
There were no sponsors involved in this. Rollerblade took care of some of the costs like the LED
lights and smoke machine and that’s about it. But all the other stuff we did with the help of the
Cityhopper crew and the people from the World Skate Center that were also a big help as well.
It was a pretty hectic weekend as we started on Friday around 16:00 with building up the MTG
setup in the building. At the moment we finished it was getting dark and cold in the hall and
we had some problems with the lights, which took some time. I think it was somewhere around
23:00 when I could do my first jumps. We finished the first night around 03:00 and went to
sleep straight away because we had to organize the Dutch Championships the next day in the old
World Skate Center. After the contest we all went back to the hall to continue our shoot. At the
end of both days I was really dead. And on Sunday morning we had to break down everything so
the World Skate Center crew could continue their work on Monday.
Some of the tricks were pretty dangerous because it was at night time, cold, light, smoke, motor
(not every single time the same amount of speed) and all the energy I already spent in building
up everything to organizing the Dutch championships between the 2 shoots. When I watch the
edit back Iʼm happy with the footage. At some spots I could maybe do harder tricks, but this was
the max that I was able to give that weekend.

Are you working together with the mainstream media again? What are your plans to
promote the project and get it out to the masses?
We will send a press release about it and hopefully it will be picked up. It worked with
Cityhopper and my pro skate. This time we’ll try it with Blackout, and my last contest at
Winterclash.

I also know that you started playing around with kind of an elastic rubber strap to gain
lots of speed in just a few seconds. Is there anything planned with that? Maybe another
Cityhopper, but on bigger obstacles?
I’ve got some ideas with it, yes. But at the moment itʼs broken as we pulled it too hard. I’m
pretty happy with the clip on a concrete quarterpipe by a lake in Poznan, Poland that Axel shot a
few month ago. If it wasn’t for the bungee cord there was no way I could do a fishbrain stall on
it. Check the video (the trick is at 3min 22 sec).

The Cityhopper project was a pretty spectacular effort from a pro-blader in promoting
a pro-endorsed skate from his boot sponsor. Really it showed the rest of the pros what’s
possible, and I hope it also inspired a few across the world. Were Rollerblade surprised
/ impressed / aware you were going to such effort, to promote both the skate and their
brand?
A little bit. I was surprised about the support they gave me for the project. Especially as it was a
last-minute call. In the beginning I invested everything myself and was just hoping it would work
out. In the end they took care of some of the costs we had but we couldn’t really pay the filmers
or people that helped me, but still.

You’ve had a long association with Red Bull. When did this wind down and do you feel
they made a positive contribution to blading?
It wound down around 5/6 years ago. I was sponsored by them from 2000 until 2006. After that
they supported some of the events I was doing, but not anymore as an athlete. With Cityhopper it
was special as they really liked the concept and I still had good contacts with Red Bull Holland.

To be continued with part 2: Sven Boekhorst talks about not competing anymore and his career.