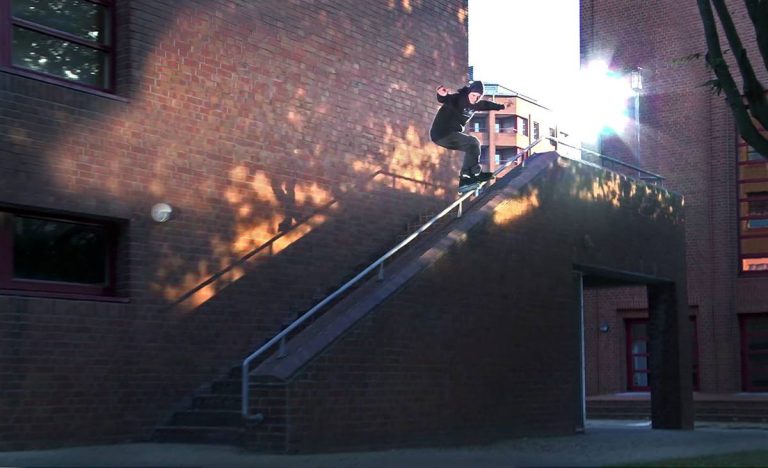 Jo Zenk is turning to be quite the pioneer of this generation of rollerbladers. From his experiments with channel grinds, to making use of modern financing platforms to get dat guap, meaning getting financing for his skating projects through crowdfunding. He is, as far as we know, the first person to use Patreon. To kick it off, Jo’s shot a great new section that we’re talking about first, and then about the whole Patreon thingy. 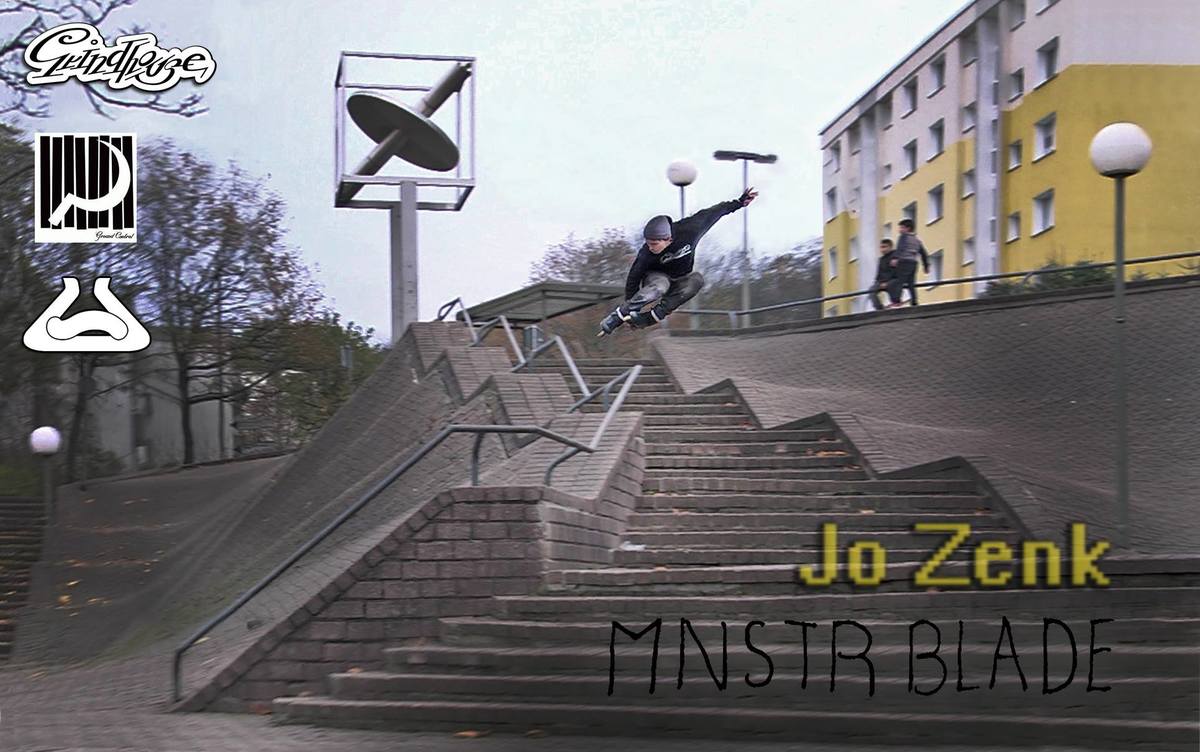 How long have you been skating for this section and who did you shoot with?
It started as a sideproject filming with the MNSTR squad within the last 1,5 years but what I actually used in the section was about a year of collecting clips I liked. Most of it is filmed in Münster by Crewmates Aleks Popvasilev and Patrick Smith. However some of the clips were filmed by Benni Petry & Daniel Enin and even Eugen Enin got his hands dirty on the cam. The switch soul to switch trusoul on the wooden benches he actually filmed the fisheye angle. This shot as well as those huge banks and the 540 doubleset gap were filmed in other cities not too far away. I directed and edited the whole thing myself.

Why do you always skate with a beanie on?
I like headwear, especially while skating. My hair is thin and so it always falls into my eyes plus if I sweat while skating I don’t like the look of i. Winter is beanietime, for summer I prefer hats.
was that mute in the skinny roll in actually the scariest trick in the section for you?
Nope. Actually just a quick shot, even tho Aleks doubted me doing it first, I delivered quickly and we only repeated it for getting the shot the way we wanted. 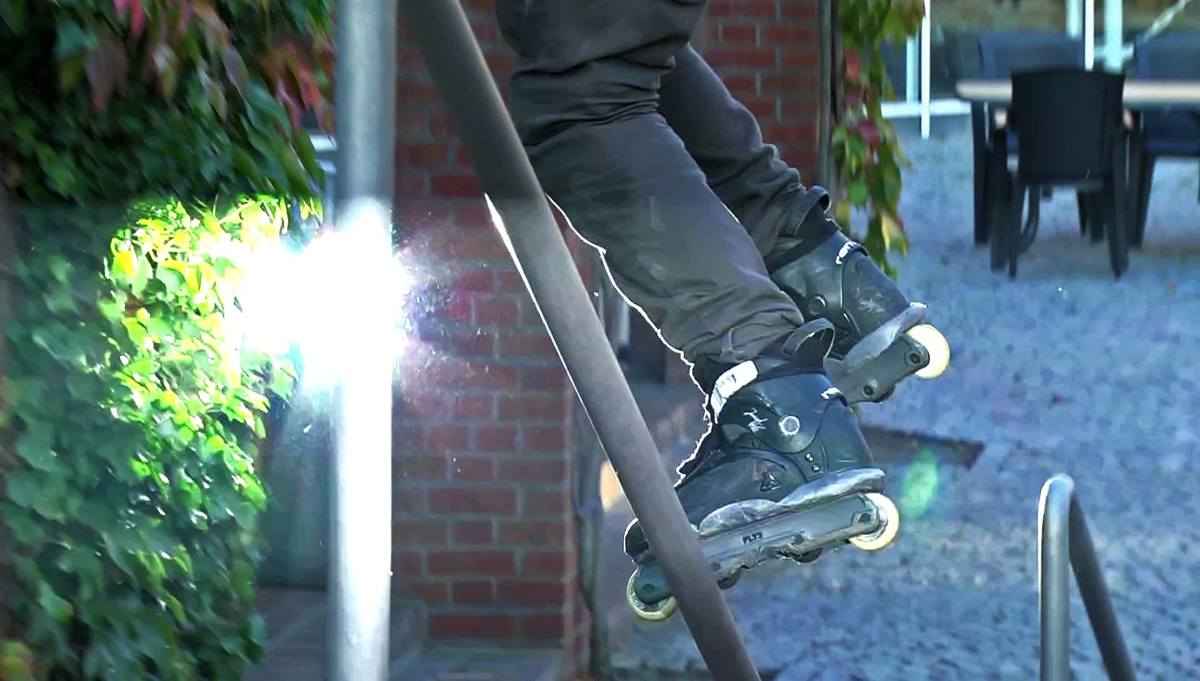 When do you choose to skate flat and when anti?
Depends on ground and mood and if I plan on doing a trick this choice matters too.
Obviously: For channeltricks I take the Featherlite. I use the MEGA with flat 64mm for shitty ground or when I have to be slow and still need to maintain agility; the huge banks, the soul 2 soul 2 fake halfcap topsoul or even the drop into the small bank are great examples. Other than that I used the 6000series in this with the doublewallride. That’s a setup for jumps, more of a FSK thing for which I prefer the Tripleframes nowadays but didn’t have em yet while filming for this one. The MEGA is my perfect choice for blading flat.

What’s the song in the film?
It’s a mix out of two different songs by the amazing Gaslamp killer that are partly used in this. Its been a long way searching the right tunes and I had lots of different versions for this along the road. Now I am happy and so far people were too. 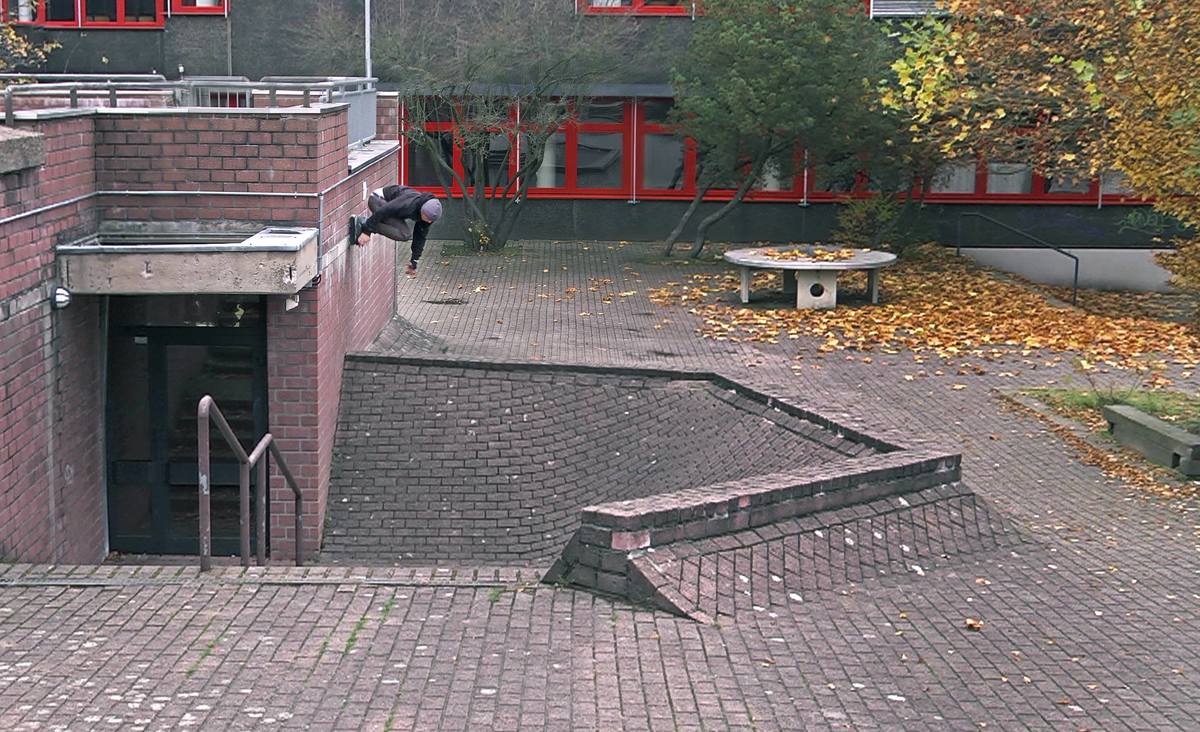 Why such a low price for the video?
Haha well its not intended as a price for the video in that way but I have to go a little bit back in time to explain. Short info: the video is a thankyou to supporters rather than being sold for a price. The aim is to break the ice around Patreon and find more people contributing monthly. However it is easily possible to just pay once for the video and to adjust the payment even after watching the content. Some people might find the frequent content cool enough to stay.

Actually I started Patreon while filming for the Remz HR.2.0 promo with the Enins. Unfortunately I had no budget and it sucked not only for me but not being able to honor their effort, especially Daniels.
When people actually pledged money I was amazed that they were willing to spend some hard earned bucks for me which first paid gas for a day filming and later funded some ramen noodles with Eugen and Daniel as a ceremonial gesture of appreciation. From then on I`ve been uploading behind the scene info and sneak peeks of whats to come on the page. My Patrons saw the trailer a week ahead too and now are in the fine position to just watch my video directly while I don’t always have to pay for every day I am working on a project since I get a monthly cashback I can spend.
This latest release now is meant as a thank you to these early supporters as well as an attempt to find more people likeminded and increase the support for ongoing projects that way. I honestly think if bladers would use patreon and all of us just send 2€ to a couple others we could make a big change to the current situation of pros having to work 9to5.
“Oh my god I have to pay monthly?” – Nope you don’t!
Quite a few people messaged me directly about concerns about pledging monthly amounts. This however is no abo. You can change the amount any time as well as leave anytime. You only pay once in the end of a month the amount you are currently choosing. That means you can pay one time only if you like and it just makes it easier to change the amount of the pledge according to your own feeling. You can buy the section with pledging 2€ only, watch it and then change the amount to what you like, wait until it is charged once and leave again. Sounds complicated but is super easy.
It is meant to find more people willing to buy into blading directly. What I “earn” with it is directly going into the next project so far even with a direct explanation to how it ended being used.
The page itself offers media and information, often ahead of time as well as a community part where anyone is welcomed to leave questions and get into contact more deeply. It could also be used as a gateway to consulting in any way whether it`s about blading, hardware or life in general.
However since I don’t expect many people to do so without further understanding of patreon I am currently planning a second release in a different way, maybe just a dropboxfolder that you can unlock for a couple of bucks via paypal. For now it will only be accessable via patreon even if nobody is buying into it still is the thank you to these guys and it will stay being best and cheapest way to watch this section.
LOVE TO SEE MY SECTION? HATE PATREON? HIT ME UP – Ill sort a dropbox folder soon. Let me know your interest. 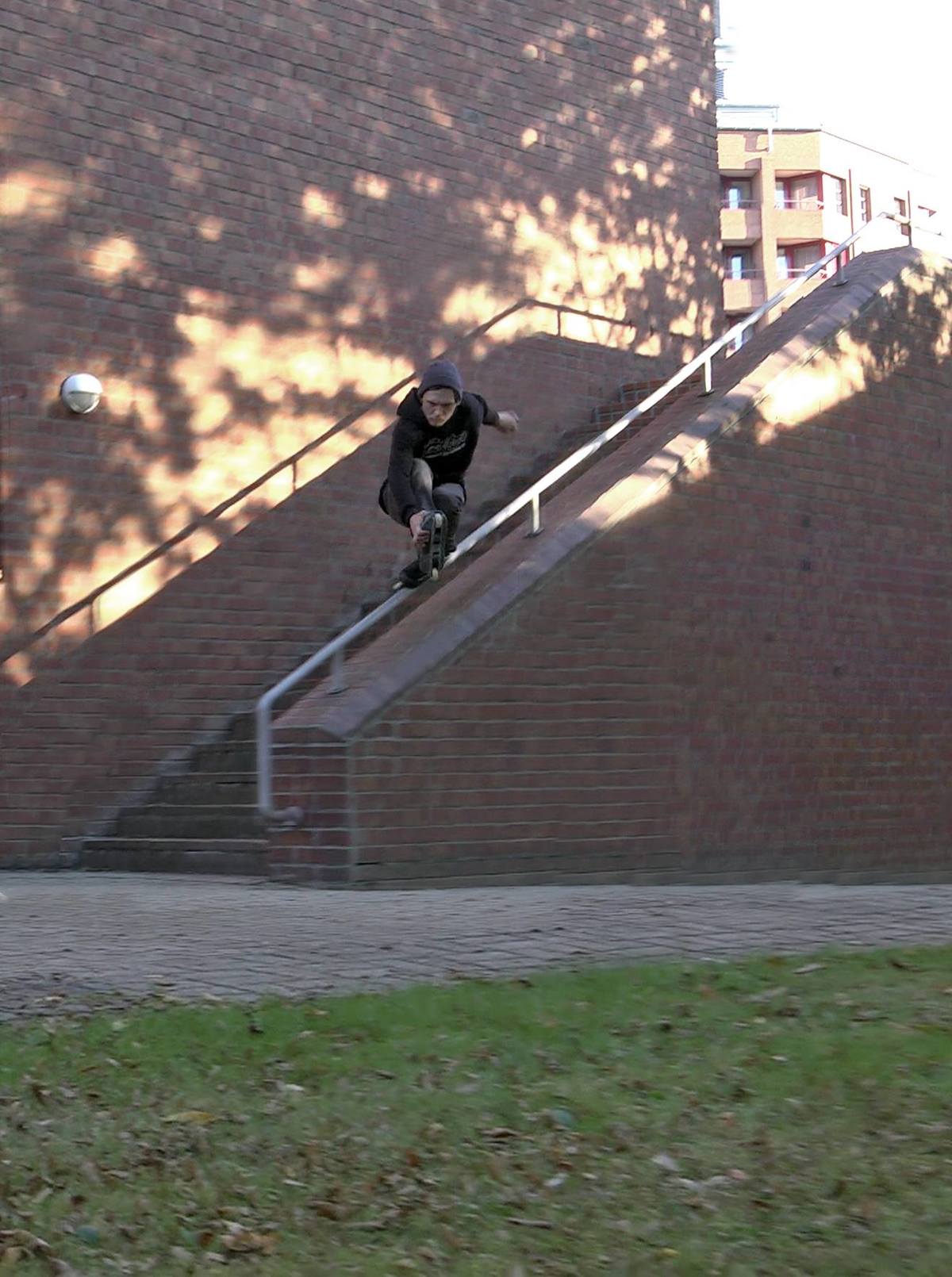 Have you recovered from Winterclash?
Haha, have you?

No, I haven’t.
As you know I got ill Thursday before and spent the night before Friday in fever so it was quite an exhausting Winterclash. Eating ginger a lot and having fun helped me collect enough strength to land in the finals but then my legs collapsed under too much pressure in too little time. Fortunately my last trick worked out which was a great thing to end an amazing Clash for me. Really one of the most fun times I ever had at Winterclash. As I was expecting I was quite sore the next days but the fever was gone. Now I am back in health!

What has been on your mind the most lately?
MNSTR BLADE footage.. No plans and way too much time spent filming resulted in 50gigs of sorted MiniDV footage which resulted in this section already. Now its quite hard to determine what to do with the whole pile since there is several options.
Another thing is how to plan summer the best way. Without Roskilde as a safe and perfect thing to plan around it is different this year even tho I know some of my priorities like Kobenhavn for any reason and Latvia at least for GGfest. I also recently finished my studies and I am now in the great position to have time for anything that is not overlapping with other plans.
So yeah, everybody hit me up with plans. With contestdates, with project, tours, whatever..
Support Jo via patreon.com/jozenk or directly via paypal.me/jozenk