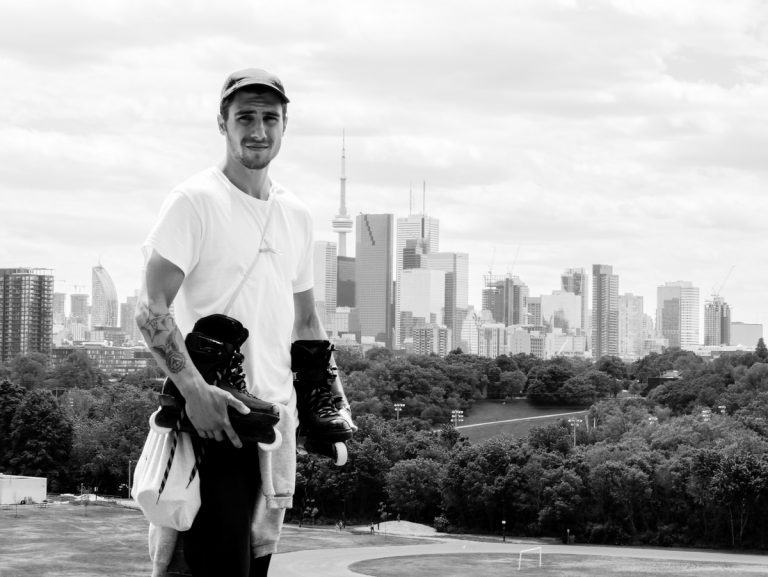 KEVIN LAPIERRE: THE OPPOSITE OF MURPHY’S LAW

Kevin Lapierre has been making moves on the scene for the past few years, so finally came the time for Be-Mag to do a full leature interview with Kevin. Also, we’re premiering his OWC introduction video section. For the interview, Be-Mag asked for help from Immony Men and luckily got it. Immony and the guys Stephane Julien and Dan Millar sat down with Kevin at the Cirque du Soleil’s artist residence in Montreal, where he’s currently working. 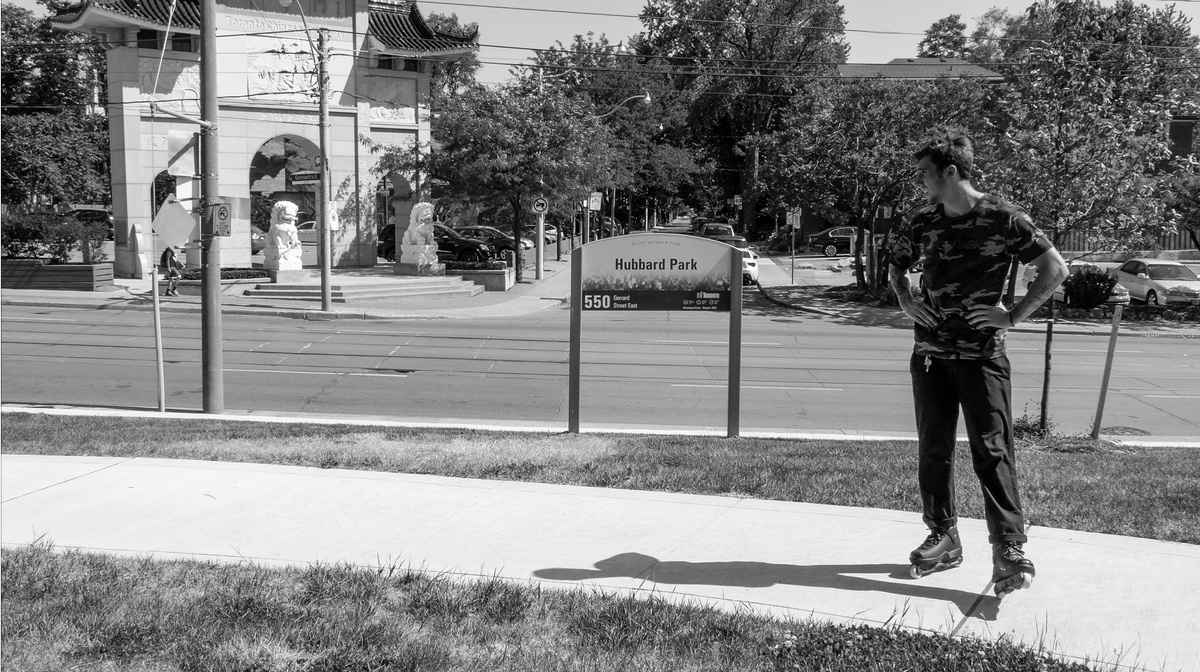 I: Kevin, what brings you to Montreal? Where are we? Why are you here?
A month ago I did a workshop for Le cirque du Soleil, it was for a show named Volta. The workshop was with 6 guys on BMX, we did the tested it out and it didn’t work because rollerblading couldn’t generate enough speed on the same ramps as a bike for the show. A month later they called me back to try something out for their first show on ice. They asked for 2 more guys that can ice skate well so I contacted Dan, and one of the organizers contacted Brandon from California.

S: How do you like your experience with Le cirque du Soleil, with it being the one of most elite and well known within the circus industry?
I like it because I had never had a coach, I never had anyone ever tell me what to do and we have people telling us what to do and how to do it. One week is alright, we’ll see how things are later, but I think I like it. You know, I will be pushed to my limits. 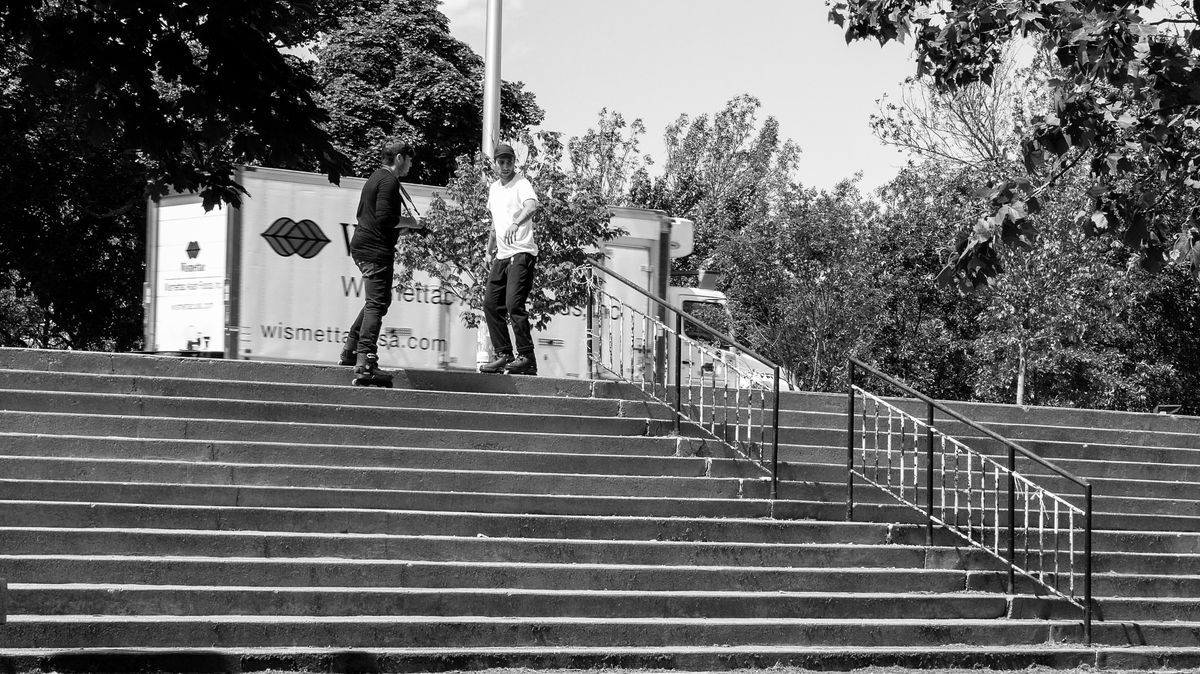 D: So its winter in Quebec, there’s snow everywhere and its cold out. How often do you skate, with you and where?
They just opened an indoor park in Wickam. That is about 20 minutes from Drummondville which is where I live.  So, I will skate maybe 2 or 3 times a week. I also took a training session with Ledoux at his gym located in the same building 3 times a week. So I skate twice a week alone and workout with Matt three times.

I: Its the end of the year now, 2016 is coming to an end – What are your future plans? Do you have any projects with any companies?
So what’s happening now is that 2016 is over. Before 2016 I was trying to work things out with my girlfriend. Trying to have a normal life. Apparently that’s what life is. So that’s what I did.

D: Can you recap 2016 and tell us where are you going with this?
I did 125 shows in 2 months, that’s a lot of shows. I skated at Boschi Pope’s Contest in New-York, Bladesgiving in Florida, and Blading cup in California. I skated street a few weekends in Toronto with you guys, during that time we talked about the new wheel project. So now I think for 2017, I’m going to focus on taking my time with OWC and see how we can do things right. Its ok to film here and there, its alright.  But it would be nice to do something different and unique, something interesting with the guys. Also I just want to chill and skate as well as hang out with my girlfriend. 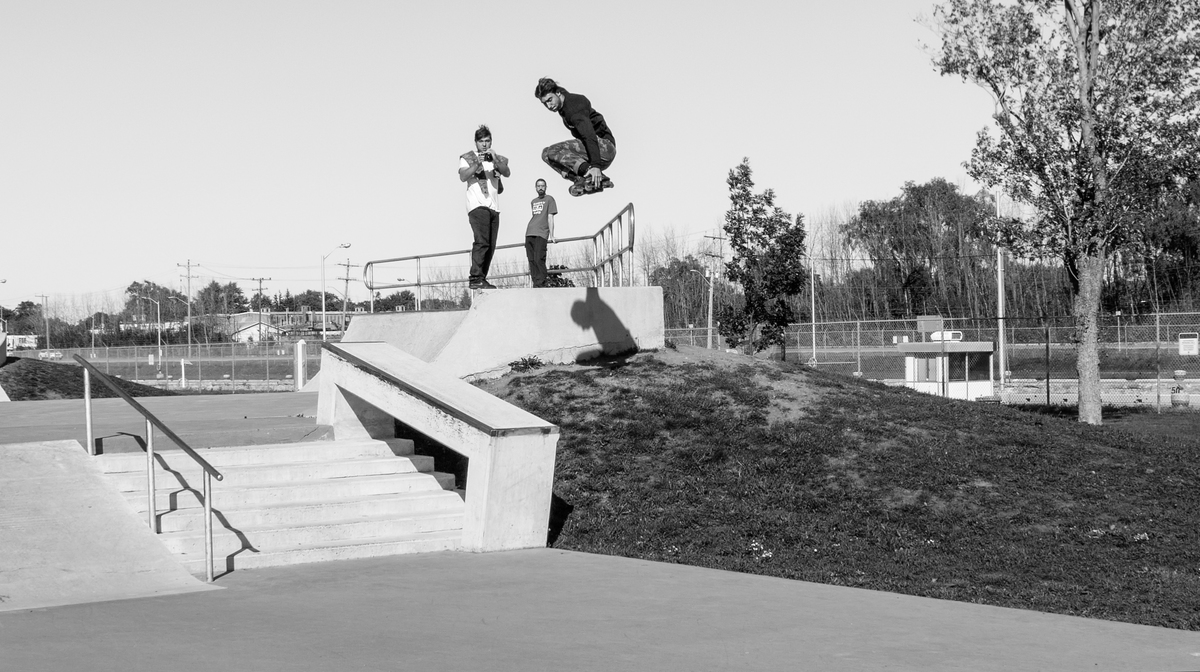 S: I would like to see Kevin Lapierre on the Mega ramp! Would that be something you would be interested in?
Yeah that would be really interesting. I went to Bladesgiving and had a conversation with Wake. He had a few questions about the shows that I was doing, and he also explained how things worked with Nitro Circus. That was really interesting and inspiring, so I would like to go to Woodward and try the big ramp sooner than later.

I: People see you with different skates, you did some promo for different companies – and you don’t have a formal boot company sponsor. Is there anything new with that?
After RB, it was something I was a little less comfortable with. Things were strict with that contract, you need to do this and that. When I started skating it wasn’t about things like that. Being a part of the industry in this way wasn’t why I started skating. I just wanted to have fun. So now I’m just trying a bunch of different skates. I’m not really talking with any brands. D-structure helps me; they carry a bunch of different skates. I tried Valo V13s, I liked them a lot but at times after a few months I found them a little flimsy. I tried the Razors SL, size 8-9 was a little big, now I’m in 6-7’s and I think I might stick with that for a little bit. So I’m just having fun like I did before I ever had a sponsor.

D: Some brands gives you free stuff what do you think they expect from you?
I don’t know if I can call that as a sponsorship, Its more like a helping hand. They like what you do so they give you something as a gift, but also they don’t ever really ask anything in exchange. Automatically you do try and give something back because that’s just the way it is. 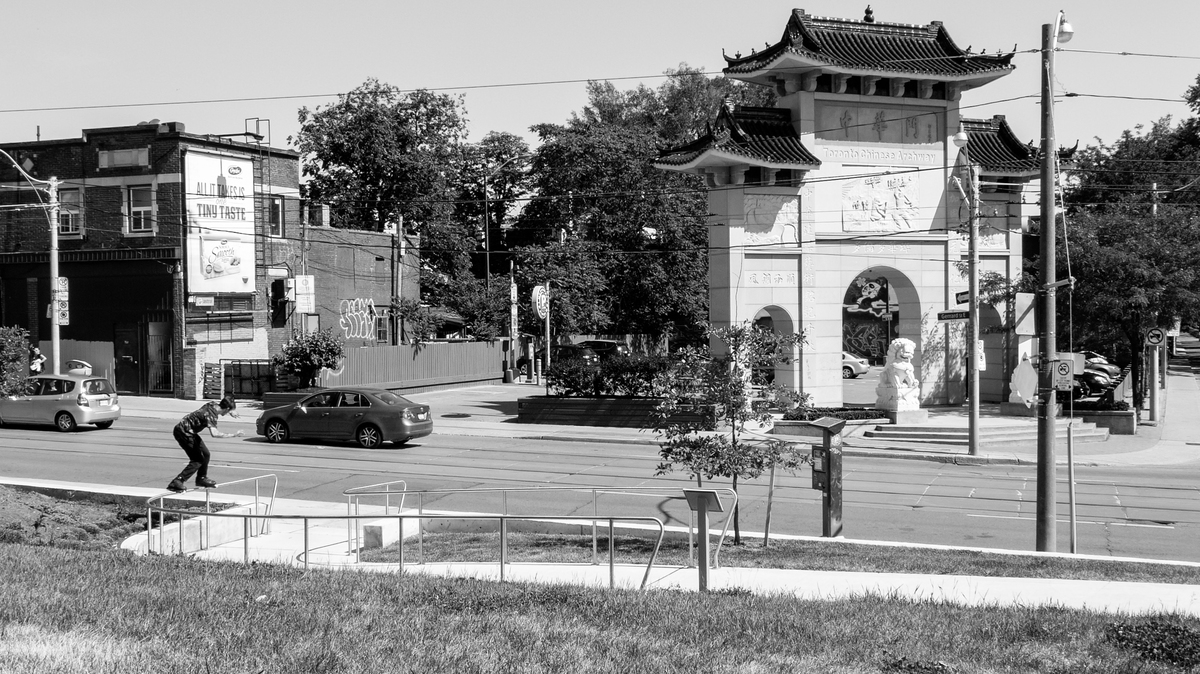 I: But that’s you now. Let’s say somebody starting from the ground up, they make their break through edit. And then they want or expect things. You’ve been on a pro team and now people are sending you skates – this doesn’t happen to a normal skater.
Yeah, Razors sent me two pairs of skates already and I’m not even with them, we just talked about me trying the skates and here we are.  I don’t know if I’m ready to reinvest myself into skating. Rollerblading is so small. I’m just doing this for fun, I’m glad to be back at having a lot of fun.

I: Are demos fun?
Demos are fun. Its pays my bills, I’m having fun riding with anyone.

S: In the past few years Rob G came to Drummondville and hangs out with Math Ledoux because they are good friends. How is it to have him around and skate with the guy? You both seem at the same place right now, with just having fun skating.
Having him around helped me a lot. We have had some real deep conversations, but it just happens naturally. I remember seeing him in the Heat video. He’s in the friend’s section, with his big Remz skates doing a royal on a long rail. He looked like a cool dude, but you can feel his energy. And so in the last few years he’s been around and we were always together, there was something in skating that we were both doing. We were lost, we would do things for something and everything we did was for a reason for a trade. That’s not how I work in life. If I offer a friend a drink its because I want to offer him a drink not because I expect him to do the same later. And so it helped a lot having him around, having his advice and inspiration. 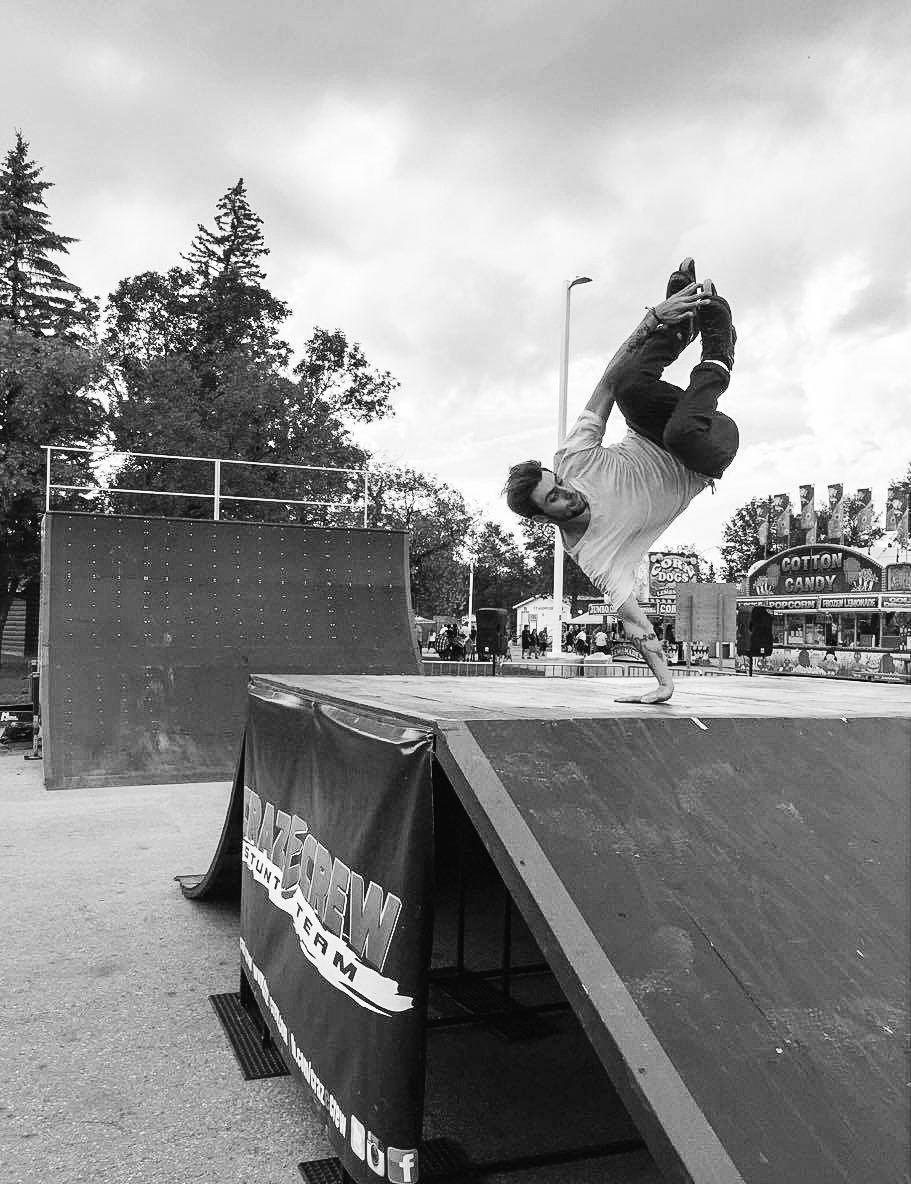 D: A question that is often asked is: Where do you see yourself in five years? But also where do you see skating in five years from now?
Honestly I don’t know; I don’t really try to think about skating in five years from now. Stephane had me thinking yesterday about mega ramps and that skating could make a comeback through that. It is where we have the most outside exposure right now. I’ll still be skating in five years, if there is any event I’ll be there. If not, I’ll skate street or do demos. I just want to skate. It took me almost five years to start liking demos, I used to complain about it all the time. I didn’t want to do the tricks, but when you look down, you see that you have your skates on your feet and that’s always a good thing.

I: Any last words?
Not really, just peace and love. Don’t focus on five years from now, live for today and have fun. 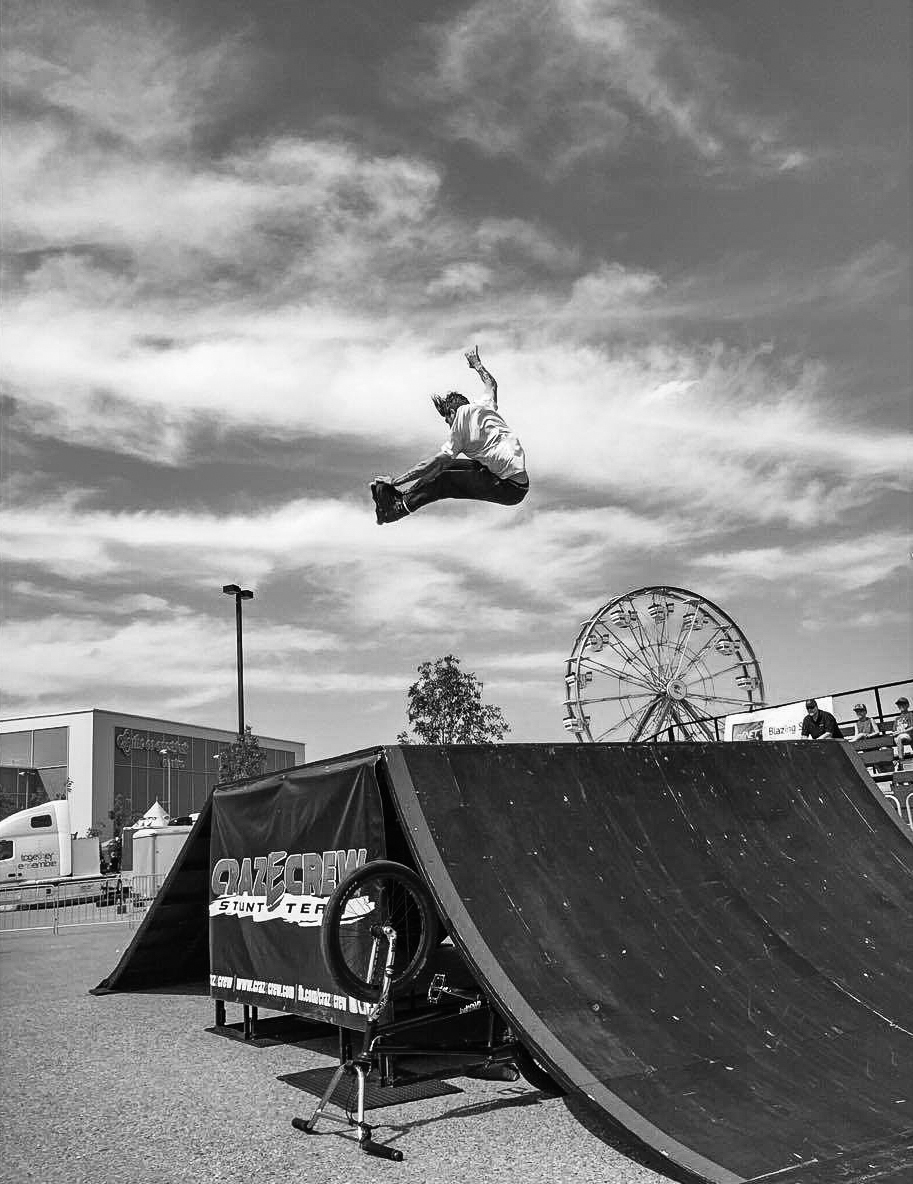