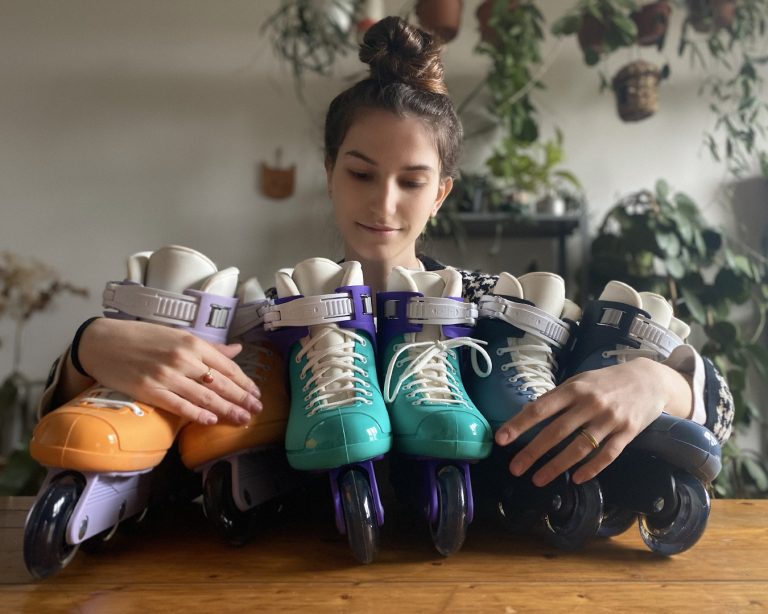 The Roces brand have been pioneers in the world of inline skating since literally it’s inception. They have been here for the golden years of blading’s popularity boom back in the mid-nineties and they fought the good fight and stuck it out through our dark times and remain here now, some thirty years later, for what looks to be blading’s second wind as far as mainstream and public acceptance.

Roces recently shocked the blading community when they released a flashy preview of some of their classic models and shortly afterwards announced their new 92 models, which are a throwback to blading’s early years of brightly colored boots and a welcome change of pace from the usual base colors that are so prevalent in blading’s design palette.

So to get some insight into what Roces has been up to lately regarding their development of their new skate line, we reached out to their team manager, Ms. Martina Margiotta, and spoke with her about her work with the iconic brand and how the turbulent times recently have affected production during a sudden boom in demand from the general public. Here is what Martina had to say.

Thanks Martina for taking the time to speak with us. Now to get right into it, Roces has been making waves lately with some very colorful skate options such as the Domestic Punk and the 92 skate releases. What was the team input like on upcoming products like the 92 releases? Did they feel that there needed to be more options for beginners or for recreational skating as opposed to pushing them towards strictly “aggressive” skates?

We usually design the skates with the team. This time Alessandro (the production manager) and I curated the process from start to end. I always had the idea that for sure – a fresh and new looking skate was needed. One day he mentioned he would like to make a colored FCO, so we got to work.

You referenced “colored FCO” in your response. Can we get clarification on what that is for us that are uneducated in manufacturing verbiage, please.

FCO is just a Roces model M12 boot mold with high cuff and liner, simpler buckle, and memory strap. It’s one of the first inline skates Roces started doing back in the ’90s. It’s a good skate, but I felt we needed something fresher looking. Since we had our best horse in hand (both quality and look), we combined the two.

So where did the name for the 92 skate line come from?

We were unsure about the name and we actually called it with a different name for all the months we worked on it, but it was the best option so far but nobody was enthusiastic about it. One day few days before the presentation, Alessandro had a call for trying to find a perfect fitting name or we would’ve left that one. I asked which was the first year Roces had an inline skate catalogue & it was 1992. And at that exact moment it felt so right into my mind because I’ve heard 1992 my whole life since 1992 is my year of birth. We ended up saying ok let’s see if this fits because it actually sounds cool. Two minutes after we decided 92 would be the one. It’s really funny to think that I’m working for a company that started producing inline skates under this name, the year I was born hahahaha

I know some individuals were expecting your new 92 line to be newer, more colorful versions of your very popular M12 models. Were there any thoughts on making a small run of the 92 skate releases with aggressive components to satisfy those individuals?

Although I would love that to happen, I don’t believe we will. Though who knows. 🙂

What do you feel is the importance of using colorful skate choices that appeal to women and also a wider audience than the core aggressive market?

As a colorful person myself, I always feel there is a need for more colors. What I feel is essential is to bring the aggressive audience out of the comfort zone and as Roces is on social media (close to the aggressive core), bringing more colorful skates that also appeal to a different audience is hitting two birds with one stone.

Do you feel like the skate industry focusing mainly on the male demographic was a missed opportunity by not making skates that catered to women’s aesthetics and/or anatomical differences ?

I tend not to like thinking of a product as girly or boyish. Nevertheless, I can’t ignore the fact that Domestic Punk and 1992’s had an excellent response from female audiences. Surely, there is a slice of the cake left sitting on the table because women have been left out of the industry for long.

How does being the only woman team manager in aggressive inline factor into painting your vision of rollerblading? Do you feel obligated to make sure that females are well represented with products that support their interests?

It’s hard to answer this question because I don’t have terms of comparison. I like to think of myself as a team manager and not as a woman team manager.  Italy (the country where I grew up) is centuries behind in gender equality. Only 35% of our parliament is made of women. Since the beginning of the pandemic, 70% of those who lost their jobs were women and as of December 98%.

I am aware and sad about this problem that seems so difficult to overcome, although I don’t feel obligated to push to close the gap. For myself, I feel like women should be picked up for “the job” because of their value, not because they’re women. As it is today, I never get asked by a girl to be sponsored and I won’t go out there looking for a girl just so we can say we have a girl on the team for the sake of calling ourselves inclusive.

I feel my job and the job of the industry is to encourage girls to get involved more and make them feel welcomed. Consequentially, they will feel more confident to ask and speak for themselves. Also, stop thinking pink is the only color possible for girls. hahahaha.

One of the things that keeps coming up within community discussions is women not having an equal representation on pro teams. Mery Munoz is only one female on a boot company’s international pro team. Have there been discussions on being more inclusive and giving any of the deserving women out there a chance to represent Roces on that level?

As I said earlier, I have never been asked by a girl to be on the team and I would feel uncomfortable hunting for a woman just because she is a woman. There are many deserving people who are “left out” because there isn’t space for everyone, but many deserving people feel cool with what they have. Otherwise, I would’ve had more people sliding into my DM’s. Or they just don’t like Roces. Hahaha. We have spoke about this topic with the team many times though.

Is it frustrating seeing another brand that isn’t rooted in inline skating culture like Impala capitalizing on a particular style of skate that was heavily influenced by Roces earlier brightly colored skates of the 1990s? Or do you feel proud in knowing the Roces brand has had such a lasting impact on the market after all these years?

I feel like working for the Ferrari of rollerblading. Working for a company with such a significant impact is an honor for me. I feel privileged. I don’t see it as frustrating. The more people with wheels on their feet, the better. I found it to be hilarious – from the name of the company to the fact that the girl drawn on the skate box wears FCO.

Globe had the capital to build a company out of the blue, invest in communication, and deliver it quick to market. They took the occasion to dip their feet in rollerblading and contribute to making it more popular in the 21st century. We will benefit from it. There is no need to fight over the same slice of cake – we have to make the cake bigger.

Blading has seen quite a boom in popularity the last few years, how much do you think the pandemic has played a part in the sudden resurgence of inline skating? Or was it just the right timing and the accumulation of years of hard work?

How has the pandemic affected Roces production as far as the sudden overwhelming demand for skates? Also can you explain how you were able to overcome that adversity in your manufacturing warehouses while still staying productive and also keeping the company employees safe at the same time?

As maybe many remember, Italy was one of the first severely hit by the pandemic. We were lockdowned entirely from March to mid-May, which meant the factory was closed. May 18th the factories reopened. At first, it was an uncertain time where we were in limbo, not sure if the sales would continue as usual or it would be at a standstill. It was a surprise to see sales going up. The warehouse was practically empty at some point. We were able to keep up with the demand and everything started to flow again.  At Roces headquarters, the production machines are spread apart enough to allow everyone to work safely.

We have heard there has been a lack of raw plastic materials in many industries and that has slowed down many manufacturers. How, if in any way, has it affected Roces’ skate production in light of the growing demand over the last year from retailers worldwide?

For the aggressive production, we exclusively use plastics made in Italy. For the rest of the production, it’s usually German made. During the first wave last year, we didn’t have any problems. Now we are facing problems finding materials from wheels to plastics to aluminum. Two factors are now deepening the issue – more demand plus the stop and go production due to the virus. This situation is sadly leading to pricing going up.

What issues have you seen on Roces end as far as international shipping and customs and has that put a major delay in some of your skate releases?

Thankfully, due to Alessandro (who does his job wonderfully), we haven’t faced any delays until recently.

Now that travel restrictions have started lightening up a little bit does the Roces team have any upcoming events, tours or video projects lined up ?

That’s a difficult question to answer. Moving 8 people from the opposite sides of the globe it requires planning in advance and preparation that doesn’t match with current times, I have plans in mind and things I’d like to do but at the moment let’s say no, we don’t have anything settled down but fingers crossed we will be able to pull together our plans.

Martina, thank you so much for taking the time to speak with us. We really appreciate it. Did you want to thank or acknowledge anyone for their assistance?

I’d like to thank Alessandro, the production manager. Because he’s an incredible resource for the company and a kind heart.