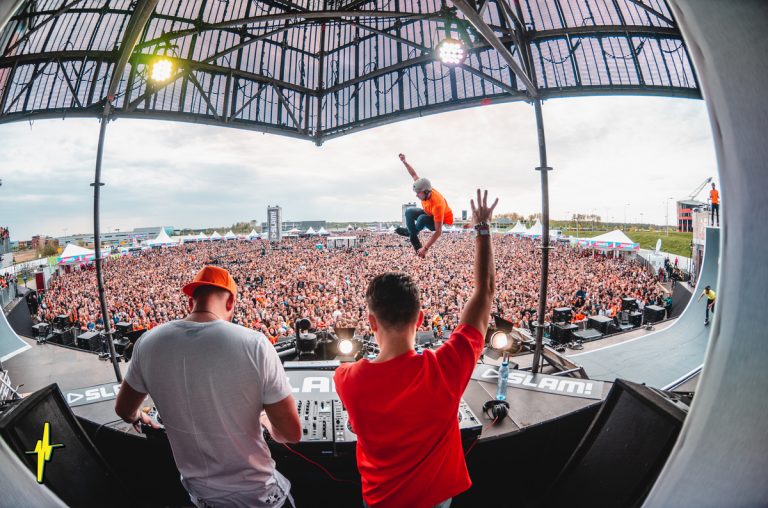 What started as a simple setup for a one-off show in 2006 became the Mind The Gap competition with 27 thousand people watching last week at the Kingsday celebrations at a music festival in the Netherlands. And the man behind it, Sven Boekhorst, lon-time pro for Rollerblade is the man behind it and many other events and projects that bring rollerblading to the mainstream in a well tailored, thought out way.

The show that was organised for Kingsday is more in vogue with what the original Mind The Gap was in 2006, a show, less a competition, Sven explains after the success of last week’s event.”In the end, it all depends what people want at their events. The last real Mind the Gap contest was in 2016 during the Urban Sports Week in Amsterdam when Julien Cudot won. After that I have been doing some shows on it”.
Logistically, for such a kind of event, the Mind The Gap crew needed to focus on setting up the course and being in time so that everything ran smoothly for the next group after them could also perform in time.

Asked about what kind of promotion did he have to do before the event itself, Sven admits to doing nothing, in a way and continues to say that the event organiser SLAM FM actually wanted to have Mind The Gap as a surprise act, and the footage and photos show that the crowd actually loved it very much.

With nine people performing in total, there were six rollerbladers and three BMX riders. The bladers Erik Droogh, Sem Croft, Jaro Frijn, Danny Aldridge, Julien Cudot and Sven himself skated in the black light and through confetti, and Sven says that Julien was killing it with his tweaked blackflips over the gap.

Talking about what has changed in the concept of Mind The Gap throughout the years, Sven explains that these days he’s doing more shows instead of doing a classic competition with rails on the setup. Sven is planning on continuing with the project and doing even more shows, and their next performance will be at a three day festival called the Zwarte Cross. You can also check out his production company’s website here.
Answering to my question on why Mind The Gap is good for the promotion of rollerblading, Sven puts it bluntly: “I think Mind the Gap is a good way to bring new people into inline skating as it’s easy to understand if somebody goes up side down over a four meter gap. Because of that reason we are also placed most of the times at events with lots of people. I made the MTG rails to still keep in technical as well but as we need at least 55m length for the setup so most events have to cancel this due a lack of space”.

Sven is still debating doing another street section in the vein of his incredible and very well received Cityhopper series, but getting older and travelling a lot is making it a challenge. We say, go for it.