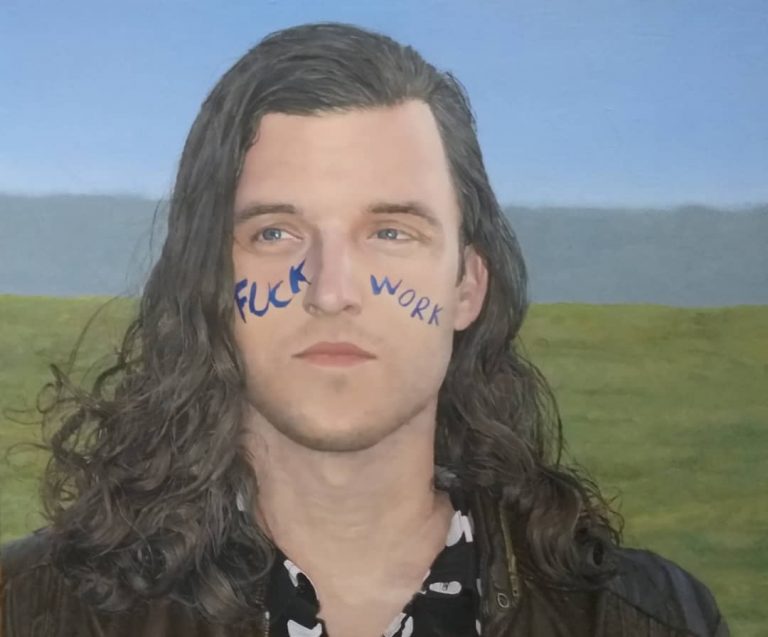 I was fortunate enough to photography and chat with Grant Hazelton at Blading Cup this year after following his adventures throughout the year. While not too familiar with him prior, the short time with him in the pop up studio gave me a keen insight into what kickstarted the adventures we’ve followed throughout 2019.

There’s a saying, ‘Youth is wasted on the young.’ We spend our lives wandering the world for years until we realize what we should have done, places we should have visited, people we want to meet, goals we wanted to achieve. Grant’s grandfather, age 96, was adamant that he not regret anything in life and take the trip of a lifetime. He recounted to me how grandfather planted this idea, to live without remorse and eschew the weight of adulthood. It was something only someone of his lengthy age could impart – there’s always time for responsibility, doing what you have to do, to put off things because life gets in the way; if you have the time to do what satisfies you, to make your finite existence on this planet feel worthwhile, take a chance. You might never get the opportunity to again otherwise.

Isn’t that the allure of traveling because of blading? The experiences and memories never to be had otherwise because we only life once. That’s the nostalgia of the culture as you age. We keep doing it because it brings us back to this time in our lives (youth) when the world was vast, exciting, and new. That is the excitement of a new spot, a new vantage point, a new trick. There’s always more, but you can never go back to get more when your time is up.

Here’s a slice into Grant’s year on the road. Thanks Grant for the time in the studio, it’s given me much to think about.

Where did you start 2019:
Well, 2018 ended with quitting my job right before the holidays. 2019 began my grand year long adventure with a road trip from Rochester, New York to Austin, Texas. I was technically in Ellijay, Georgia at the beginning of the year with my boyfriend who was giving me pep talks that I could handle the choice I made to shirk my adult responsibility for a year, live on a minimal budget and take on a lack of planning after 10 years of a steady job and routine.

Where are you ending 2019:
The end of the year is holidays with the family again but this time in New Hampshire where my mom just moved. I’ll be in Delray Beach, Florida at home with my boyfriend and our dog for the official end of the year.

Probably also trying to get in some last minute clips with the South Florida guys since the arbitrarily end of the year sort of marks the end of the “season.” Not sure if other people think that way though haha.

Favorite memories from the year:
It sounds cliche but there really are too many to list. Even things that didn’t go right turned into favorite memories.

• I remember getting a hole in my gas tank on the highway in the middle of a pretty long drive, sitting on the side of the road, watching gas pour out of the tank thinking “I have no idea what to do” and that I kinda fucked up quitting my job. I buckled down, bought some fuel hose and a plastic tank and rigged something up to finish my drive, after which I felt kinda invincible.

• First night in Barcelona, Spain eating at a random place near our airbnb, feeling fancy and free being with close friends.

• Visiting the Roces factory was surreal! I’ll remember that forever. I’m mean I got to see the skates I ride get made!

• Texas shaped lasagna in Texas with the Buddy Tour buds.

• My mom and boyfriend meeting me in Paris.

• Meeting up with a semi long lost family member in San Fransisco.

• Damn, even getting sick in Cali the day of the Gold Comp and puking out the window, driving down the highway makes me smile now, haha.

• Hanging out with baby Henry Ton That at WYII.

• Getting to be on Jump Street Podcast and share my perspective and experience was scary and rewarding.

• Continuing that conversation with a Wheel Scene interview.

• Going on safari in Africa was something I never thought I’d do.

I’m gonna have to stop here. I keep thinking about the year, looking at pictures and talking to friends and, wow, it’s really been something special for me with too many more things to list.

Spots traveled to in 2019:
I ended up in 6 countries, 26 or so states, and at this point not quite sure all the events I attended. Everything added up to be an incredible year, making it really hard to put a finger on all the spots. I’ll take a shot at the major ones, although it’s almost overwhelming in a sense to make sense of for me.

The flower shop bowl in San Francisco sticks out as an amazing thing to skate. The Forum ledges in Barcelona were really cool (even though I initially didn’t care to skate them haha). Saw some stuff in Miami, Florida that Franky skated that still doesn’t make sense. A couple Walt Austin things down south that also don’t make sense. Hmmm, it’s like the favorite memories thing, too many to actually list and I’m obviously forgetting a bunch.

Coming home to Rochester to skate with the homies always felt special too. It’s not a new spot but it was centering in a way.

Playlist that sums up 2019:
Honestly, probably something with Taylor Swift or rain sounds to fall asleep in strange places. If podcasts count, Jump Street and Stuff You Should Know were on heavy rotation keeping me awake while driving.

I think I focused a lot on small footwork details, new school kinda body movement stuff, things that made me have to take a moment to figure out what was going on would get a lot of re-watches.

Photo of you or by you that sums up 2019:
The ‘Fuck Work’ portrait by Brian DePauli @briandepauliart.

Goals accomplished in 2019:
I ended 2018 quitting my job and in a sense my adult life to take a big blade/life adventure. My main goal was to try to say “yes” to stuff and not think so hard. I’m always really into routine and consistency, planning, so part of that goal was challenging myself to let go of that as much as possible. On top of that I had the simple goal to skate a lot. I’d say I fully accomplished those. I also accomplished the minor goal of quitting my chapstick addiction and kicking the minor OCD need of always having a hair tie on my wrist.

Something in 2019 you wish you had done:
Colorado Road Trip (among a few other events) would have been awesome to get to. Overall I skated, traveled and experienced a ton of great stuff this year. No real regrets except wishing I’d planned better to cohesively document my travels. I didn’t fully appreciate how much work that can actually take and admittedly got a bit lazy. Plus my phone died (back up your phones regularly folks).

Something that made you grow in 2019:
The entire premise of the year was to step out of my comfort zone and break out of the routine I was stuck in.  I learned to take more chances, to live a little more, and not be scared of the unfamiliar. Early in the year I ended up in Barcelona basically alone for 4 days with no real plan. Not having a plan is real hard for me but those 4 days ended up being great, freeing in sense that nothing bad happened without a plan. That helped me keep in perspective the rest of the year that I didn’t need to plan so much or know exactly what was gonna happen all the time. I think I learned to ask for help more this year, being in new places with different people I had to put myself out there, ask where things were, for recommendations or maybe a place to stay.

I just think overall I gained a lot of new perspective that will continue to aid in my personal growth as this next year starts.

Something that kept you going throughout 2019:
Supportive family and friends for sure. There were times it was intimidating and uncomfortable to not have a routine, steady income or plan. I tried to sort of keep in mind a “now or never” approach to the year as motivation and remind myself how lucky I was to be on this adventure.

Grant and his twin brother in Cornish, New Hampshire

What are you looking forward to in 2020:
I’m trying to continue my blade adventure as much as possible so I’m starting with Winterclash and Pow Wow early in the year. Not sure what the rest of the year holds, but it I’m looking forward to a figuring out a new balance of regular life with my boyfriend while still skating a bunch.