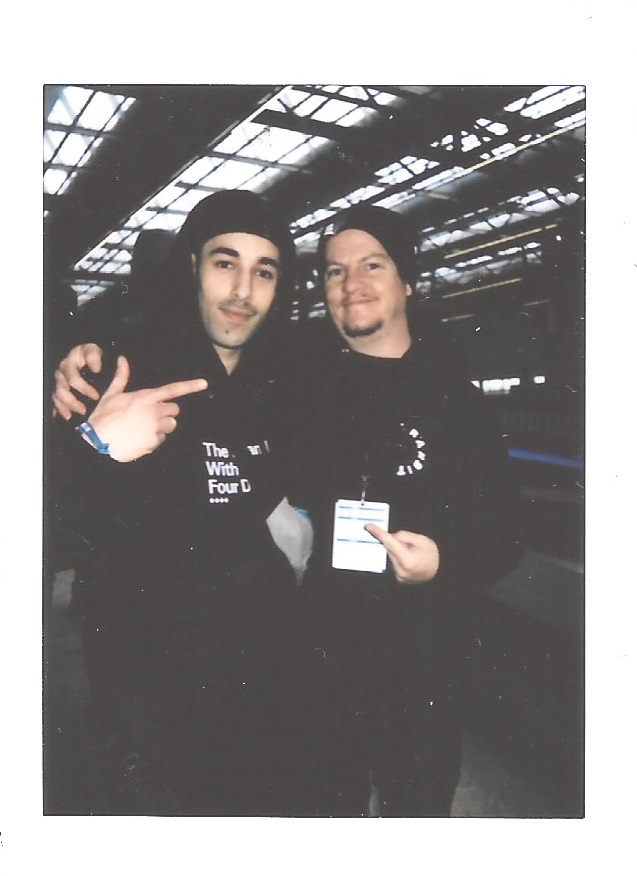 The Winterclash competition has been the premiere blading event for several years running now, drawing competitors and spectators from all over the world to Area 51 skatepark in Eindhoven Netherlands. We aim to highlight some of these individual adventures that brought so many incredible characters into one location to share in our common passion of inline skating.

Be-Mag editor-in-chief Kevin Little made his first trip across the pond for the Winterclash experience this year and had this to say about his wild adventure abroad.

I am writing this as I sit aboard my final flight back from my first Winterclash, I figured that there is no better time to jot down my experience, as hazy as my recollection is now after sleeping only five hours over the course of four days, it probably won’t get better as the days go by. Like many of the individuals that attended the event, I am still “glowing” from seeing one the most awe inspiring blading events in my 25 years of attending contests. So to backtrack to beginning of my adventure, when Be-Mag had proposed bringing me and my partner-in-crime Jonathan Labez to the Clash, we both jumped at the opportunity. Not kidding, I literally jumped out of my chair in excitement! So after months of preparation Jon had figured out the necessary pieces he needed to run a scaled down version of the photo booth that we had successfully used previously at Blading Cup. We were even lucky to find the only photography rental shop in Eindhoven within one block of our AirBnb! Our arrival in Amsterdam was as close to perfectly timed as you could get as me, Jonathan and our contributing photographer Chris Corbett all arrived in Amsterdam within minutes of each other. It was like reliving our Blading Cup adventure from a few months prior all over again!

After leaving Amsterdam we took a short train ride to Eindhoven and upon arrival we immediately headed to the skatepark, mere blocks from our AirBnb. Luckily we were able to run into Clash organizer Jojo Jacobi who gave us a short tour of the amazing park & got us situated with our booth preparation. Jojo and his pit crew worked feverishly to get everything in order for the onslaught of people that would soon be storming the gates of Area 51. It reminded me of something out of Game of Thrones or Lord of the Rings, with only slightly less blood and destruction. But nothing could prepare me for the massive amount of blading related activities spread out over the next three days.

One of my highlights from the weekend was being present for Dave Paine‘s history lesson covering the most iconic segments from the Videogroove series. Like many in attendance I was raised on VG videos and their influence still resonates with me to this day so seeing DAP give a breakdown of his favorite sections was surreal to say the least.

Another memorable moment from my trip was being able to meet my mentor Matthias Knoll, owner of Powerslide/USD. Matthias has been a HUGE influence for me and has supported me for many years so to be able to personally thank him in person for all his help over the years was huge for me.

The Aragons! These dudes dress up as a different professional each year and this year they dressed up as Winterclash special guest Brian Aragon. These awesome guys are always the life of the party & they were given a much deserved lifetime pass for their contributions to the amazing atmosphere of the Winterclash. Keep doing what you’re doing guys, because it is hilarious!

The Roces team were in attendance and stopped by the Be-Mag booth and created some of the most memorable shots from the whole weekend. From Yuto’s wild antics to Zack Pollak‘s awkward facial expressions, it had us all in hysterics! Just wait until Labez posts the rest of their studio shots, you will all be in for a treat!

The Winterclash competitions had so many highlights that it is hard to narrow them all down but I would say that the Hanglosers Bowl Comp was one of the more entertaining moments with skaters dodging inflatable beach floaties all while throwing down their best tricks for the coveted free beer provided by the Hanglosers crew. My homie Bruno Almeida was cruising the bowl dressed in his signature Incredible Hulk outfit all while rocking two different models of skates and somehow still killing it! I also sat in amazement at Matty Vella and Miguel Ramos‘ incredible bowl skating as well as comp winner Diaby Diako. The energy in the park was unreal & made for quite the memorable start to an incredible weekend.

Sadly I missed a few rounds of the pro competition as we had to rush our rental photography equipment back to the shop right at the start of the heats but luckily we made it back in time to see a few of the heats and the finals, which was insane! The crowd was swarming the park trying to find the perfect angle of the rider’s tricks and it created quite an issue as drunken spectators were spilling beer on the course, prompting announcer Miguel Martinez to threaten kicking them out of the event all together. Luckily the contest continued and Diaby Diako was announced the winner of the pro finals with Nils Jansons taking second place and Dominic Bruce taking third place as well as best trick with a wild disaster 540 alley oop acid on the Grindhouse box. The event wrapped up with sheer craziness inside Area 51 which carried over into the afterparty where we drunkenly danced the night away and left me just enough time to stumble to my early morning train ride back to Amsterdam.

After returning home from the Clash I got a message from the owner of the AirBnB that we stayed at saying that I left a pair of pants behind that contained these items in my pocket. I was looking all over for this sweet picture of Eugen & Daniel Enin and low and behold they were in my lost pants I left behind! haha The owner was even nice enough to hold them for me until I return next year. How cool is that?

Now I have attended countless competitions in my day, but nothing could quite prepare me for what I experienced on my first European trip to the Netherlands. Witnessing the Winterclash has left me with an enormous feeling of inspiration and motivation that is incredibly hard to describe, that is why it is best to experience it for yourself and you’ll hopefully feel the same way I do afterwards. So make your plans to be there next year because it is a contest that you don’t want to miss! Hope to see you there!