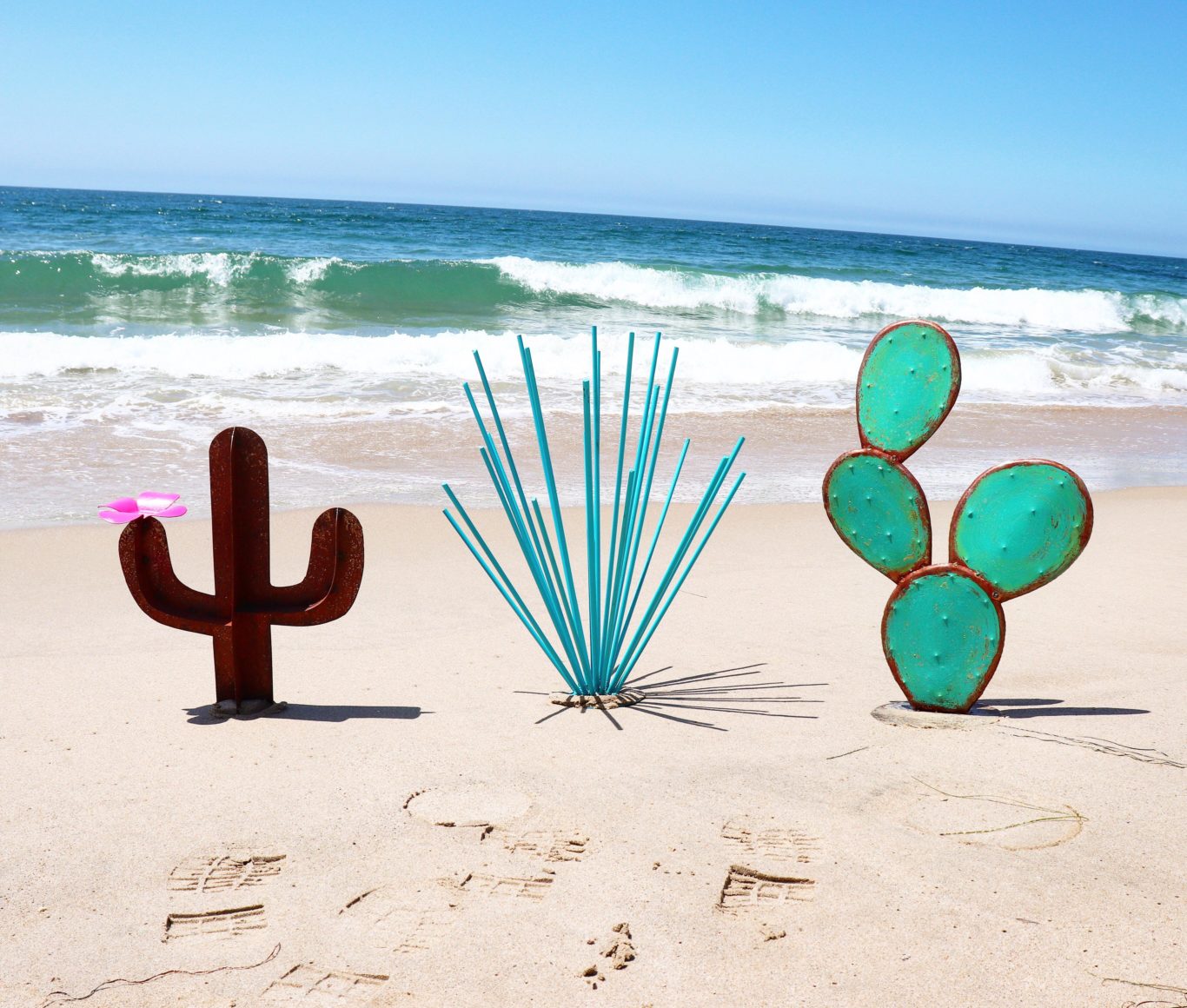 It might seem odd that I can still distinctly remember the first time seeing Omar Wysong skate. It was in late 1999 and my friend Justin had just purchased the newest Box Magazine (RIP) video titled “Amateur”. In a video featuring some of the most notable skaters at that time, Omar Wysong was a name I had never heard of before and his skating stuck out like a sore thumb, in a good way. He was skating Mach 5 at nasty down-stair handrails, hitting extremely technical tricks with style rivaling the best professionals at the time. Needless to say, I wanted to see more of him! But it wasn’t until his full section in the iconic Mindgame video “Brain Fear Gone” that he put together arguably one of the greatest introduction profiles ever. Afterwards Omar started to garner international attention and acclaim from the blading masses. This led him to riding for several other skate teams and receiving professional products from companies such as Kizer, where he helped revolutionize the frame market with his signature freestyle frames that he helped develop and design. Omar’s skating career also allowed him the opportunity to co-own his own skate brands such as the short lived Exile Wheels, RamoSong clothing and Circolo Wheels. This experience has helped him greatly in his transition to his current entrepreneurial endeavor, Topanga Patina, a company based in metal fabrication which focuses on conceptual, assemblage art work. We had a conversation with Omar about his skating roots and how it led him to his current profession. 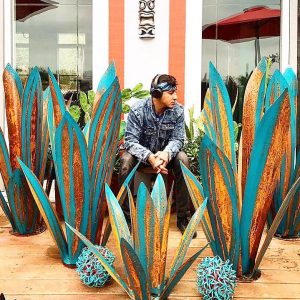 When you first burst onto the skating scene years ago you seemed to come out of nowhere doing tricks that were extremely progressive and innovative for the time period. This led to you being added as the first amateur for the iconic Mindgame wheel company. Did you feel a lot of pressure being a relative unknown to then filming videos with the biggest pros at the time?
First of all thank you for reaching out to me for this update interview Kevin, I really appreciate it and all the work you put in for the skate world. Anyway, yeah I did feel some pressure. It was crazy to all of a sudden go from skating in my hometown in Dayton Ohio to being in California filming with my idols that I looked up to at the time. It was pretty surreal to be skating with Dustin Latimer, Brian Shima, Jon Elliot and Aaron Feinberg, so I had to step it up. They were all really inspiring to skate with since every time they put the boots on, you didn’t no what to expect. But whatever it was you knew it was going to be a day of next level skating.
You have been involved with numerous brands in inline skating history. From being on Mindgame, Razors, USD and Kizer and also being co-owner of Exile and Circolo. What did you learn from working with so many different brands and how did it help you in starting your own businesses?
I definitely learned a lot about marketing and presentation. It has so much to do with the look, feel and especially the overall mission of the company. The brand has to have lots of passion, vision and the ability to adapt, create and innovate products people will gravitate too. I try to incorporate that philosophy into my art brand Topanga Patina by creating new and fresh pieces and present them with clean and imaginative marketing. It’s definitely an evolution and lots of trial and error, but persistence is key.
In the early 2000s you and a few others were responsible for the popularization of skating freestyle frames, which is skating without middle wheels, and it’s appeal lasted for quite some time. Nowadays, skating flat rocker seems to be the trend for the majority of the skating populace. Do you think skating freestyle will ever make a comeback like before?
Oh man, freestyle frames were born out of necessity and a lack of wheels lol. At certain times it was tough and believe it or not wheels were scarce so some of us would decide to say the heck with the wheels in the middle. They don’t touch the ground and the groove in the frame locks you in, plus your skates are lighter and you save cash on wheels and bearings so it seemed to make sense. I just got so use to skating that way and ended up designing my freestyle frames with Kizer which was lots of fun. I think I will always skate freestyle. I was pretty much out of skating when the trend I guess went away but hey “to each their own”,  I just hope kids give it a shot again one day.
I assume that you have taken your fair share of abuse from skating over the years. What was your worst injury that occurred in your skating career?
So many haha. I had a terrible fall when I lived in San Francisco back in the day. Pulled my groin and smashed and broke my nose, I could not walk for a month and took about a year to fully recover. That was a rough time I was broke financially and broke physically and nearly broke mentally but I eventually pulled through it, still have nightmares bout that one lol.
You were born in Guadalajara Jalisco Mexico and raised in Ohio and now currently residing in Los Angeles. How has living in these different areas helped make you the person you are today?
Its taught me how to appreciate different cultures and lifestyle as well as how to adapt to different environments and situations. I’ve learned that being resilient, active, moving forward, not giving up and knowing that what you do today is who you will be tomorrow. I’ve learned that the work you do now even if it seems unfruitful and or insignificant in the moment it will pay off down the line. You’ll be glad you hustled.
You are an incredibly gifted artist working in several different mediums including painting, metal fabrication and even acting. Were you artistically inclined at a young age or did it come later on in adulthood?
Thanks Kevin! I was always involved in sports since a young age and not really into any visual or performing arts though I did have an appreciation for it. It wasn’t until the last years of my skating that I attempted to get creative with obstacles and photo and film angles as well as brand marketing. Once I left skating I stumbled into theater and did a little television and film and eventually discovered metal sculpture. It took some time to sell my art but it’s now evolved into a full time career. I never thought I would be an artist it just kind of happened and and I am extremely grateful for it. You never know where your next life turn will take you so take it, might surprise you.
In following your social media you seem to be quite busy in running your own business, Topanga Patina. How did you go about making art for fun to now making a living doing what you love?
It just kind of happened piece by piece. After selling my first sculpture I was hooked and just always looking for inspiration and creating new works. It’s just really fun and a lot of work. I’m definitely working more and harder then ever before and grateful for the opportunity to make art everyday. 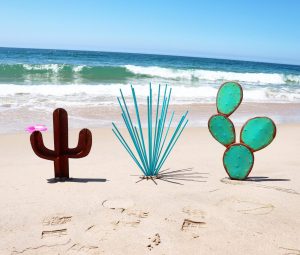 What does your usual work day consist of at Topanga Patina?
The day starts at 6 am, at the gym then designing, building, photographing and shipping sculptures till about 8 pm then marketing and computer work till about midnight. I try to squeeze in family time as much as possible along with some meals. It’s a lot but very rewarding.
Is the majority of your work done by you or have you hired assistants to help you?
I do have a couple assistance cutting and filling in gaps to lighten up the load. My wife Sarah helps me a lot with shipping and miscellaneous tasks helping the ToPA machine rolling smoothly which I appreciate so much. I’ve also been introducing the craft to my daughter and getting her in the shop.
In seeing some of the massive shipments of your art going out each week you seem to be quite successful. What is the most popular item that you sell?
My best seller is the 2 1/2 Rustic Blue Tequila Agave. I designed it a few years back and since has consistently been ordered almost on a daily basis.
You seem like you stay pretty busy with your work schedule and your family. So the burning question we want to know is do you ever find the time to skate these days?
I’m grateful for what skating has taught me and where it’s gotten me but I feel like I’ve closed that chapter. I cherish the experiences, memories and people I’ve met through skating and I still look at rails and ledges everyday and I will for the rest of my life. Maybe one day I’ll strap some skates on and hit the streets again but not sure when. 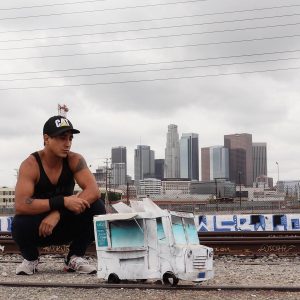 Be sure to follow Omar and Topanga Patina on his social media accounts.

Stop by the Topanga Patina site for more info