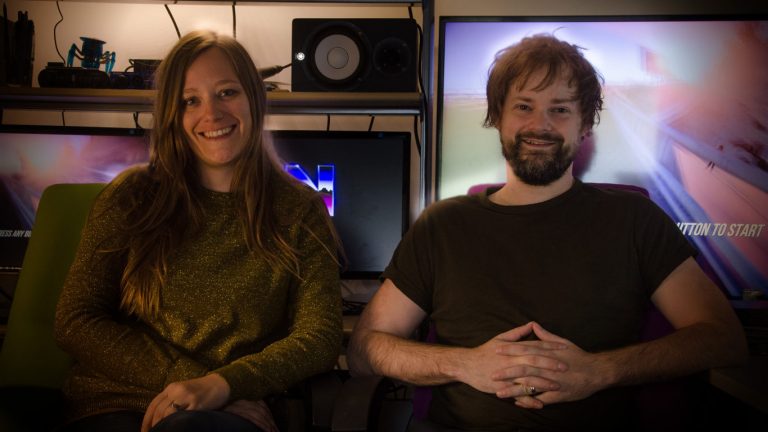 Rollerblading is punk rock. It has nothing to do with the music, never mind the early video soundtracks, it has to do with work ethics. As punk rock, rollerblading has the people doing it themselves, following DIY principles and keeping things going in a small and tight community of like-minded individuals, and then you have the people bitching and waiting for somebody to do it instead of them. Every local scene has them, every company also has both. For every 5 people bitching, there’s one actually making the scene what it is.

Jelle Van Den Audenaeren is one of those unsung heroes of rollerblading. You might have not heard about him, you don’t know his name, you’ve never met the dude. He’s quiet and softspoken, so much taht we barely exchanged a word at this year’s Winterclash, where he was giving bladers from around the world the first chance to test the latest rollerblading videogame, On A Roll.
Jelle is 35 now, and has been skating since he was fifteen. One of the most important things he learnt from the process of making On A Roll is that if you are passionate about something and are willing to work really hard for it, you can make your dreams happen. 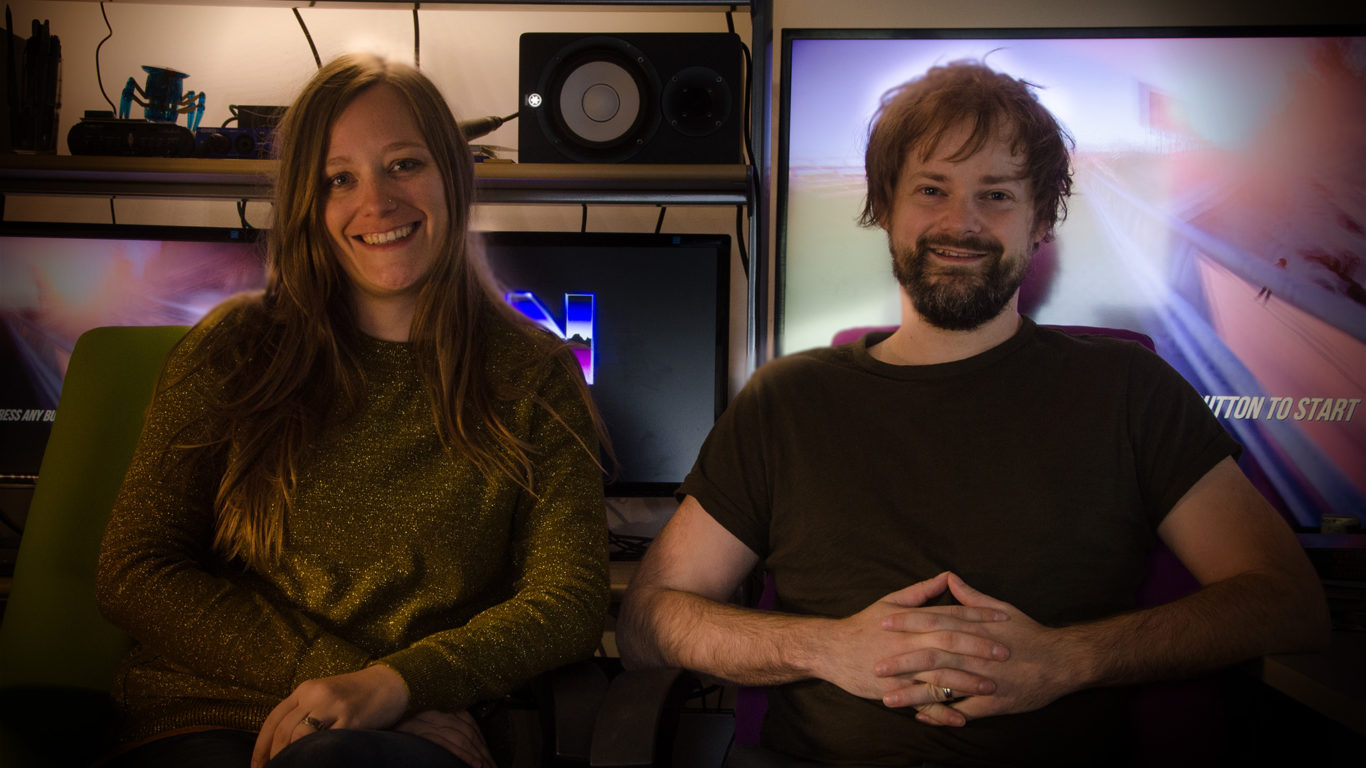 So, in medias res… how and why did you think of making a rollerblading video game?
It basically started out as a sparetime project, nothing serious at all. I was messing around with a couple of game engines and I had always dreamed about a great rollerblading game. This was around the time Skate 3 was still fairly recent and I must say the smoothness and realistic feeling of that game inspired me as well. But then slowly I started spending more and more time on it.

When did you decide to try and commercialise it? The people who are most acquainted with rollerblading and understand the mechanics of it are rollerbladers? What do you think gives the game broad public appeal? Also, what engine did you use?
The engine I use is Unity, and games that run on it are Assasin’s Creed: Identity, Satellite Reign, Wasteland 2, Escape plan, and so on. I hope the game appeals to people who like extreme sports in general and of course inline skating. There was no inline skating game available (the last one was Rolling for PS2) and I wanted one so badly that I decided to make one myself. When I told people they were so enthusiastic that I thought other people might like to play it as well. 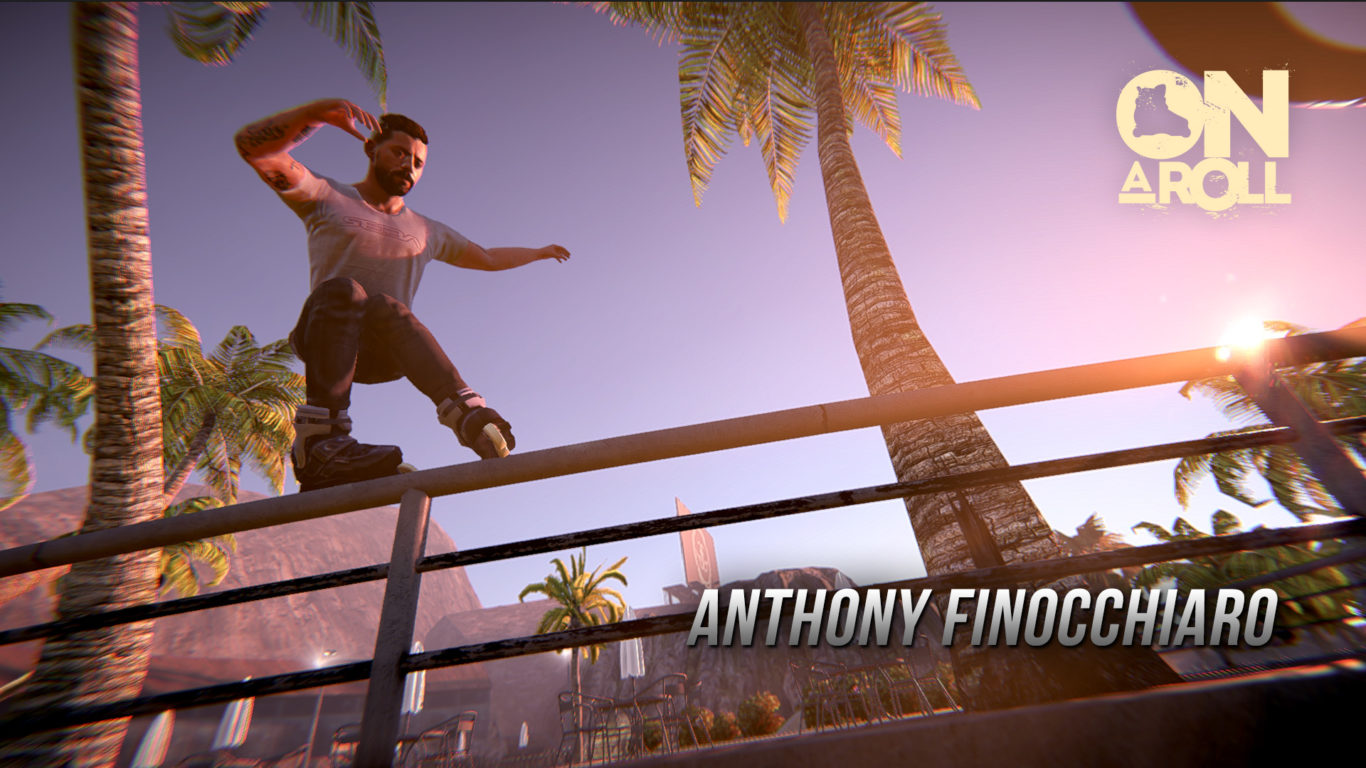 How many people are usually involved in making a game and how many were on your team? Can you tell me something about the cost of production?
Normally lots of people work on a video game, like a couple of hundred. For On a Roll it’s basically just me. I did get some help from my cousin for one year, but all the rest was just me.

That is just insane.
We received a funding loan from the Flemish Audiovisual Fund (90k euro) and did the Kickstarter, so actually a really small budget. I often worked seven days a week working on On a Roll while my wife took care of the kids.

From the first time you sat at your comp to the final product, how much time passed?
About 6,5 years? I know people complain it has taken too long, but one man can only do so much. 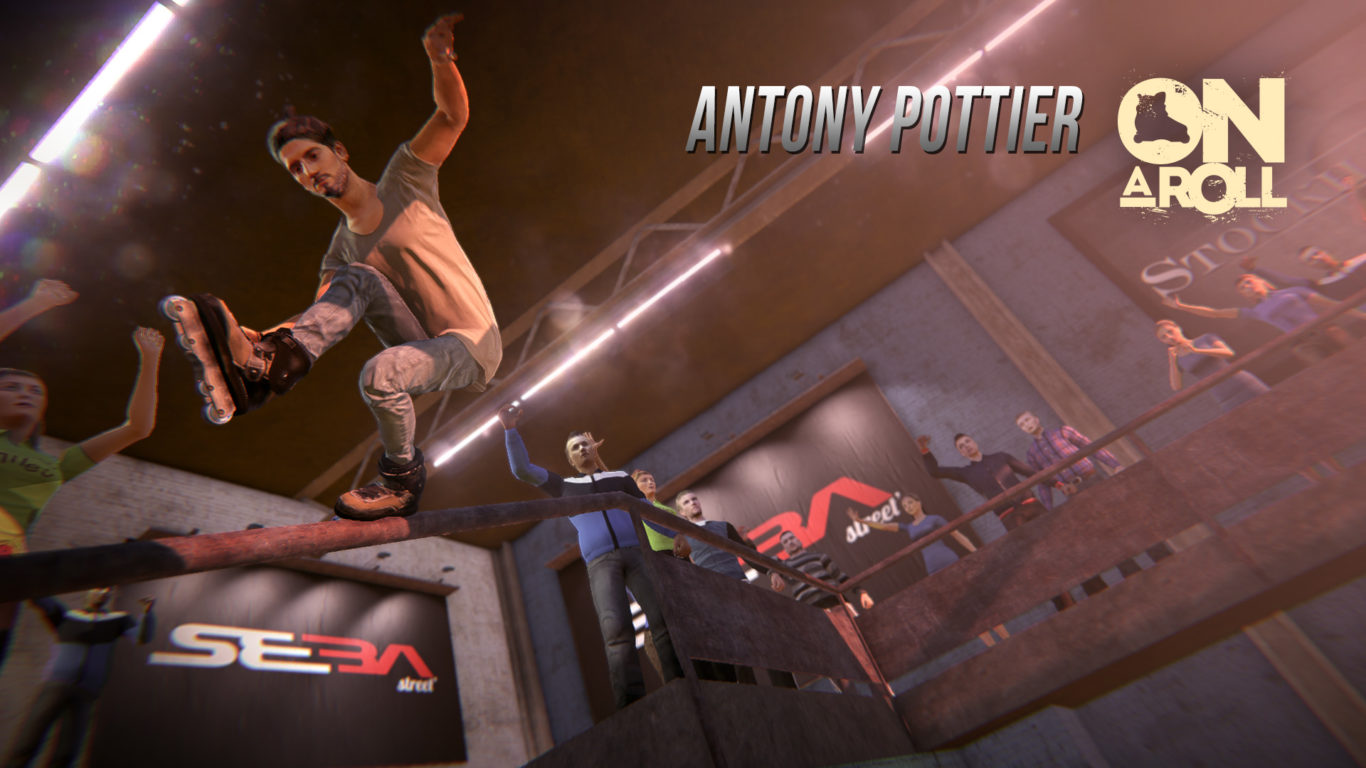 I would like for Be-Mag readers to understand more about the game development… how did you do it, or to say it better, what comes first? The environments, the capturing of the tricks or the design of skaters clothes and faces?
First there’s prototyping and in our case this was a very basic model of a halfpipe with a bear skating up and down in a T-pose. Then I designed a basic skatepark and started refining gameplay/physics and animations. Once that was done, we did our first mockup session with Francis Ali.

How long did it take to get all the tricks captured and which skater helped you with it?
The first session was one day, the others took a bit more, about 10 days in total. And then we also did 3D scans of everyone involved. 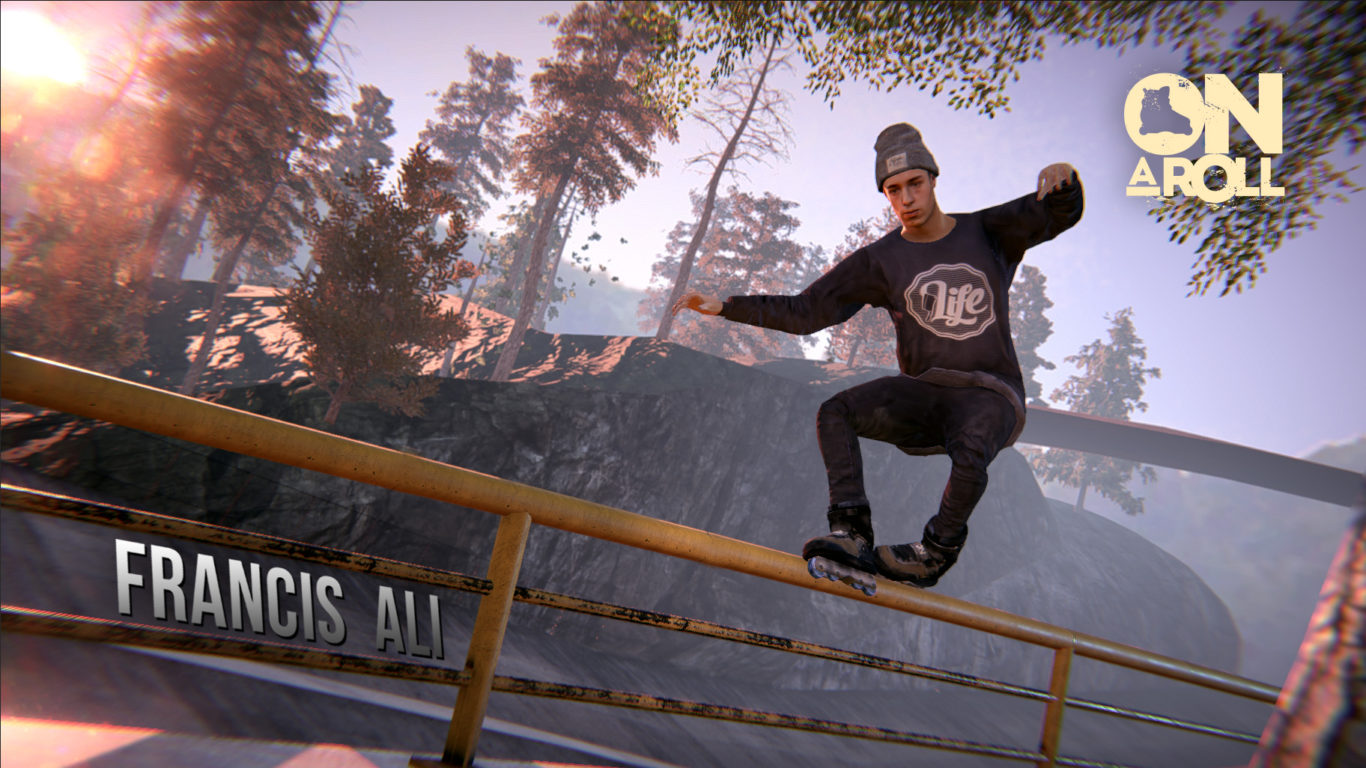 Who are all the skaters involved? Who are the characters?
We have Manon Derrien, Stéphanie Richer, Richie Eisler, Robert Guerrero, Antony Pottier, Anthony Finnochiaro, Dustin Werbeski and Francis Ali for the pros. Then we’ve also got Jimmy Gill and Precy Verdier, two really kind people who backed the Kickstarter to have their avatar in the game. I also put myself in since I had done a 3D scan as a test.
There are currently 10 skaters, but at least two will be added later. You will be able to customize your own character (not the pros), but that feature is currently disabled because we are still adding stuff. Players will be able to free-roam, and also do missions, like try to get on the cover of a magazine, beat your friend in a game of ‘Match the trick’ and more.

How did you choose the skaters to be involved in the game? Did you approach others and were there any outright declines?
Well, there was one who declined, but all the rest was super positive about being featured in the game. Some of them are currently not in the game because the mocapping is quite expensive, and we have a limited budget, but I’d love to add more skaters later on. The ones that are featured in the game travelled to Belgium for the mocap/3D scans, which was a lot of fun. 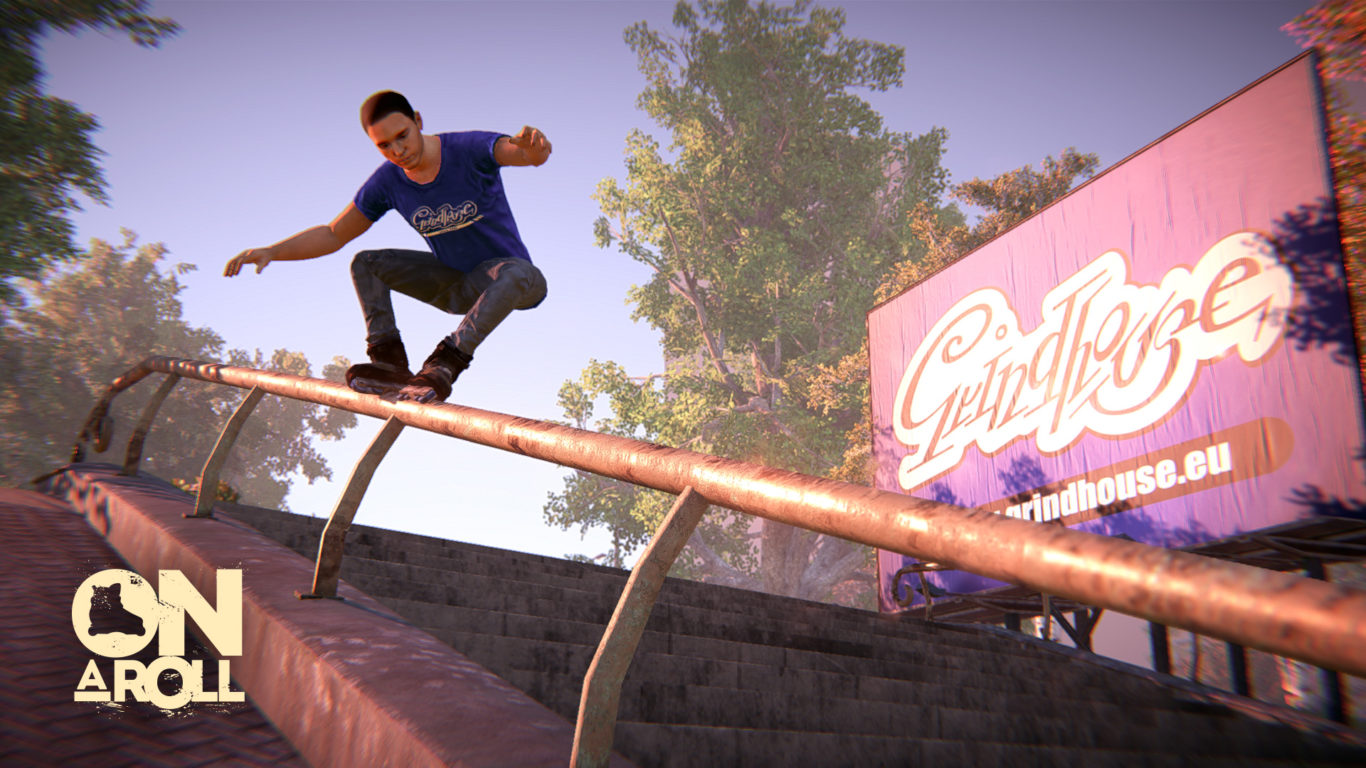 You don’t have any Valo skaters?
That’s right, at the moment there are no Valo skaters. We hope to add them later. We contacted them though, but we couldn’t pay for the travel expenses due to our small budget.

Honestly, how much support did you get from the rollerblading industry and how do you feel about it?
All the brands and skaters involved were absolutely great in offering their support. Some of them put their private savings in, and we are extremely grateful for that. The pros are all so kind and some of them have become friends and we often talk to each other when we have the time, cause everyone is very busy, but it’s nice to stay in touch. When we started the game, we didn’t know the rollerblading industry was in such bad shape. Lots of the companies we contacted for support/sponsorship didn’t have any money to put into the game. We hope that inline skating can have a comeback, maybe On a Roll could help with that? Seeing the sport and brands alive and kicking again would make me very happy. I hope that people will become inspired to put on a pair of skates and go exploring their neighbourhood. 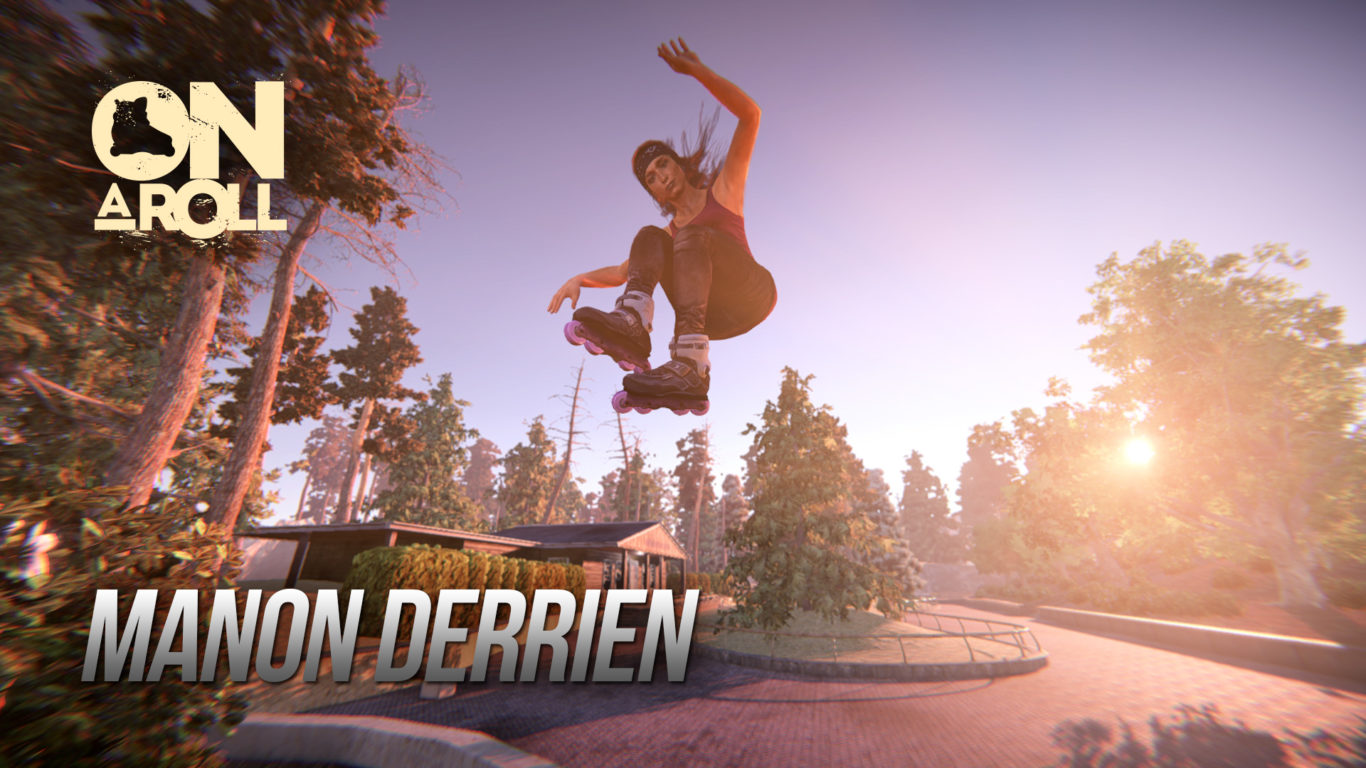 I know you had people planning on suing you for using their troll comments in the promo video. Please, tell me about it.
Yeah, that was rather unfortunate. We wanted to take all the negativity thrown at us and turn it into something positive, like a fun parody, but apparently the person wanting to sue didn’t like us doing that.

So, there are a lot of douchebags in rollerblading, would you agree?
A couple.

Looking back, what was the biggest challenge for you during the development of the game?
The most difficult part of development was getting creating animations and gameplay. Also, dealing with negative feedback, trolls and sometimes hateful comments were often unmotivating and made me doubt myself often. 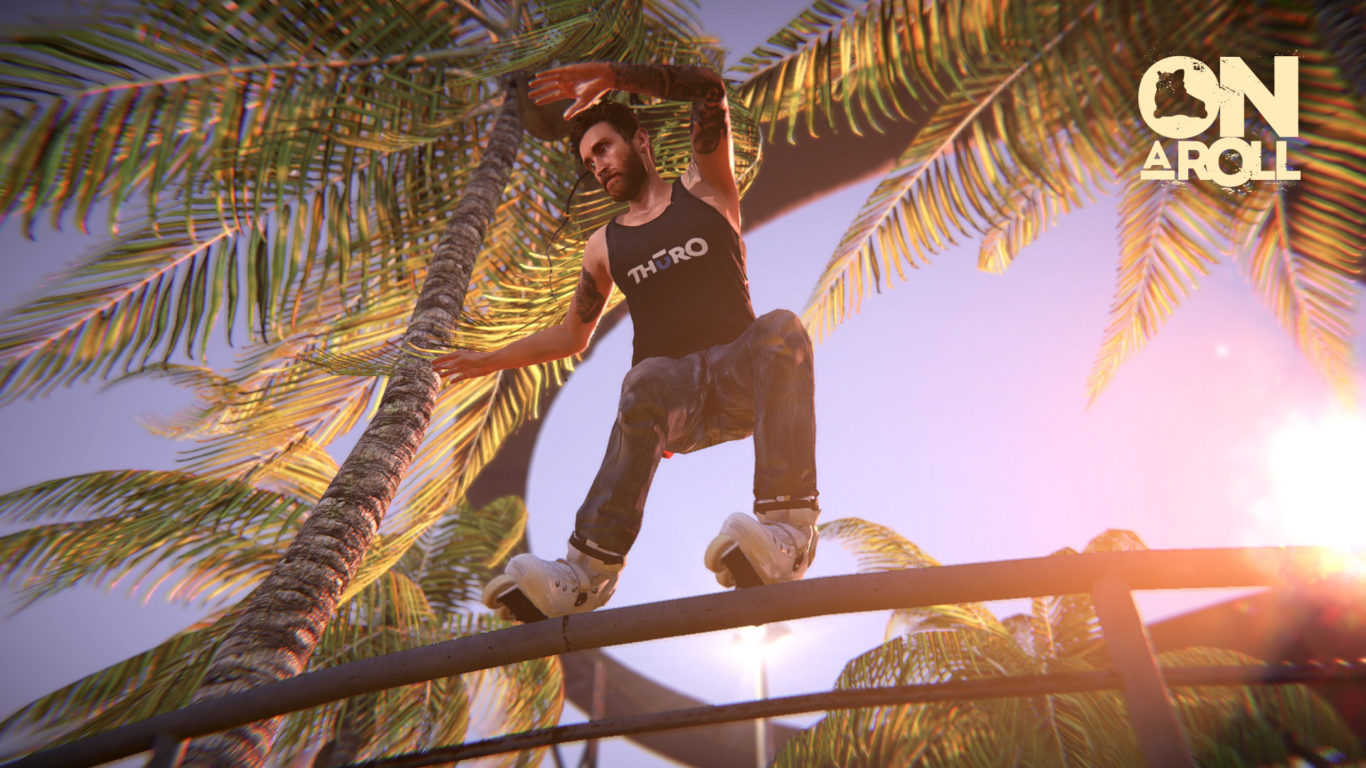 Back to the game, how did you secure the music rights, and who is going to be in the soundtrack?
Well, the group Dun Robin from Australia offered us their music. They are so good and their music goes great with the game, so we were very grateful for that. We are also thinking about adding some hip hop, so that people have variety. My father is a musician also, and he made a custom soundtrack for the game as well. It’s instrumental and currently it’s used for the menu.

Did you ask Gabriel Hyden, he’s in a really good band called Vague, and also Jon Bolino plays in Roast USA?
No, we didn’t know they had a band. But that would’ve been cool.

Is it possible to ad new stuff?
Yes. 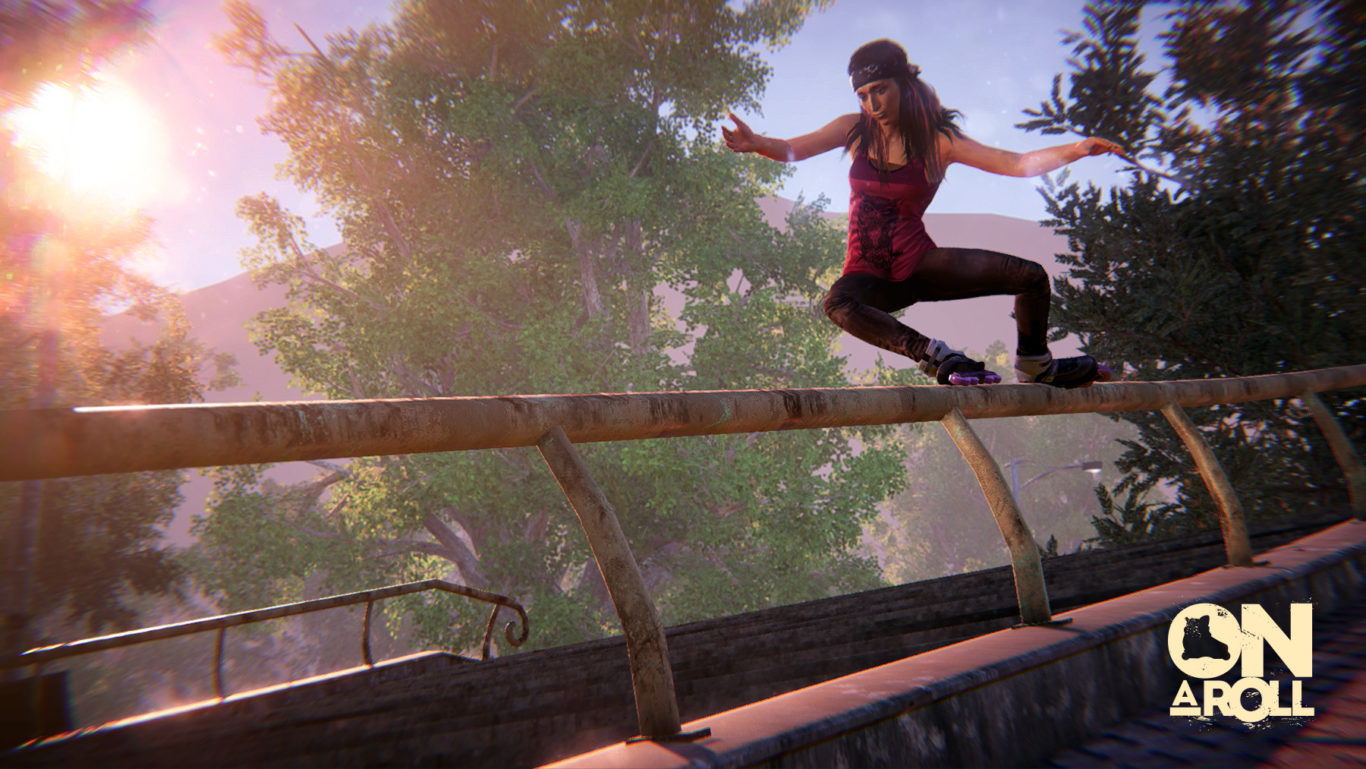 Well then… What’s the most important thing you learnt about yourself and rollerblading during the making of the game?
If you are passionate about something and are willing to work really hard for it, you can make your dreams happen.
Rollerblading: that the industry is in a bad shape unfortunately, but we hope On a Roll can help change that and put the sport back on the map

I am sure you can help. Any words for the rollerblading industry and scene? What about gaming fans?
To the scene: stop criticizing each others so much. Send out positive vibes and support each other. You all share the same passion, so why not unite in a positive way?
Gaming fans: I’m working really hard to improve the game, fix bugs and adding features, so please be patient with me while I roll out the game. 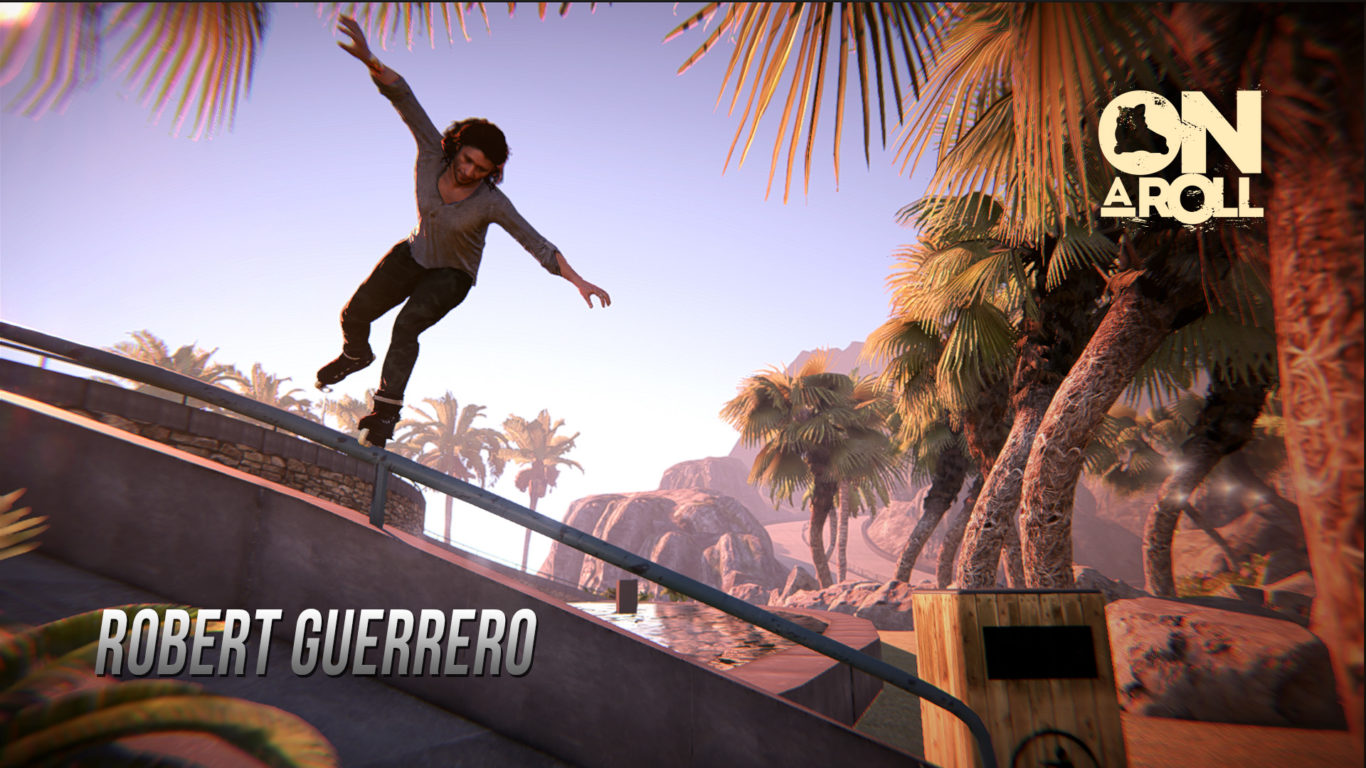