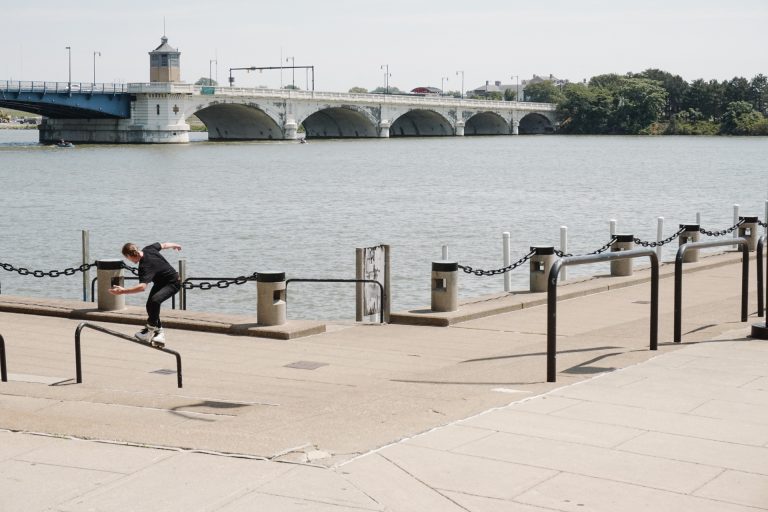 Detroit has also long been a hotbed for producing incredible skating talent and three individuals who have been carrying the torch for the hard nosed Detroit scene is none other than Brian Weis, Dakota Hult, & Luke Naylor. The trio recently released a slick new video which features full profiles from them aptly titled Rotation. We had the chance to speak with the three amigos about what it is like working together filming a full length video and we get a look into the unique chemistry of the Detroit trio.

Thanks so much for taking the time to answer our questions, guys. So you all just dropped Rotation, which was incredible by the way! The video features full profiles on the three of you and we wanted to just dig a little into your friendship and what it is like skating together. So to get right into to it, what are your top 3 essential items you need at every skate session?

Luke Naylor: My top 3 essential items are the camera, wax, and my skates.

You all put your body on the line in many ways filming for Rotation, so who tends to get hurt the most out of the 3 of you?

Luke Naylor: It really just depends on what we are skating, but I did break my elbow this year haha. I don’t think one of us really falls more than the others, maybe Koda? Hahaha.

Koda Hult: I think I have a little more meat on my bones than the other two guys so in that sense I feel like I might take some harder falls. We all get banged up pretty good when filming though.

Out of your group, who takes the longest to land their tricks?

Luke Naylor: He’s gonna be mad, but its Brian for sure.

Koda Hult: Yeah, he will be pissed, but def Brian. Mostly because he is the pickiest. If that dudes finger is pointed the wrong way in the clip he will do it again till its perfect.

Brian Weis: Me! By a landslide

Who is the most picky when it comes to their spot selections?

Koda Hult: I wouldn’t say any of us are too picky. But all of us can be picky about certain things, I think.

Brian Weis: Luke and I can get selective but all in all between us 3 we can usually make something happen at most spots.

Who takes the longest to get to the skate spot? Who is the worst procrastinator of your group?

Koda Hult: Luke is not an early riser. Lol

Brian Weis: Most of the time waiting for Luke to get up, yer boy tends to miss lunch if ya feel me.

Luke Naylor: I’m the worst procrastinator, I usually don’t wake up til 11am, and these dudes are both early risers. I have made them wait for me in the morning several times, haha.

What was the one trick in your profiles that took you the longest and why?

Brian Weis: Hahah Ah man, all of them but like 2. This question for me would be easier if you asked which took me the least amount of time to land.

Luke Naylor: For me it was the gap to front royale to alley oop topsoul at night, it was a struggle for sure. It was sketchy to gap out the rail and then hold the grind how I wanted to and to switch up before the end. Skating at night can be tricky, especially when the camera light is almost blinding. It took me countless tries and I remember leaving thinking I didn’t get anything but one of them actually looked good. Big ups to Koda for sticking that one out for me.

Koda Hult: The royale shuffle to true miz took a bit of time. The cess slide mainly. It was a long shuffle to get to the ledge and the surface was pretty inconsistent and didnt want to slide at first. Had to wax the path to the ledge to get ‘er sliding the way I wanted it to. Was probably about 20-30 tries before I laced the solid one we put in the video.

Who would be “the cooler” out of your group? Meaning that if you were getting busted at a skate spot who would be the person in your group who could talk your way out of a ticket from the cops?

Luke Naylor: I think we are all pretty chill when it comes to getting kicked out of spots, it really didn’t happen very often while filming this project, but the whole time it was during the Covid lockdown so many businesses we skated at were closed.

Brian Weis: I’m pretty witty so I’d probably take charge. Most of the time we really don’t get into those situations. Its Detroit & most of this was shot during Covid so not a lot of business/schools/etc open.

Koda Hult: I think we are all pretty chill when it comes to getting booted. Its skating and it happens.

On the flip side of that, who would be the one out of your group who would be most likely to talk shit to a property owner if they were getting irate?

Luke Naylor: I don’t think any one of us is really the type to argue with people giving us the boot, we are all very chill about it, I think it’s the best way to go, spots are probably more likely to capped or destroyed if you act like a dick to the owners.

Brian Weis: Nah that’s not us, maybe years ago haha but yeah plenty of spots no need to stir up shit. Just trying to have a good time and avoid anything like that. We’re all raised to be respectful gentlemen.

Koda Hult: That being said I am definitely not afraid to be a dick if someone is expressing that energy towards me or my friends. Typically I try to strike up a conversation with who ever is trying to kick us out and buy more time for whoever to get a few last attempts at the trick.

Sometimes the hardest part of editing is finding the right song choice to fit that particular skater & their personality. Who was the easiest person to find a musical track for their profile?

Koda Hult: Luke took the lead on finding the track for my section and from what he said I believe Brian had a track picked out already. So probably B Weis.

Brian Weis: Probably me, I had a few choices already. The one just fit. We tried to use only my friend’s music but a few parts just weren’t fitting. Eventually and ideally would love to have a friend make a score just for the video or part. After some exploring and searching through friends we found tracks that fit with everyone. We did want to use music that was all instrumental, no lyrics/voices. Something that just rides along with the tricks.

Luke Naylor: The easiest person to give me a track was Brian; he had an idea to use that song for a part already. That track went perfectly with his part, it was light-hearted and it flowed well. Brian’s friend James made the song for the intro as well, we originally planned to only use that was made by our homies but I couldn’t find a song. I had some tracks in mind from the beginning but for some reason changed my mind on using them, after searching for months for something else I re-watched an older cut and decided the surf music was the way to go. Koda’s track took me some time too, I decided to start asking the homies I would see at the skatepark if they made or knew of anyone who made music, and Zac Straight came thru with that banger. His friend told him to use some of his stuff for a skate video and that song worked well.

Whose profile took the longest to film?

Koda Hult: I think Brian def stacked the most clips but it was all filmed in a timely manner. Not sure if anyone’s in particular took longer than the others.

Luke Naylor: We all kind of just decided to save all of our stuff from 2020 and just pick the best of everything we got that year so it wasn’t like a race to complete anyone’s part. Obviously living in Michigan aren’t able to street skate from December thru March so it’s the perfect time to kick back and edit everything. Brian got the most clips for sure, but we all had more than enough to complete our sections. I broke my arm in September and was out of the rest of year.

Brian Weis: The weather here is really only solid between March/April thru Sept. so we basically just stacked until the snow hit. No deadlines, no pressure just going out, exploring, being in motion and just seeing what happens. One of my favorite parts of skating.

What was your favorite memory from the filming process for Rotation?

Luke Naylor: It’s hard to pick one moment, but my favorite memory was going to Toledo and stacking clips all day. We were all really hyped that day and all of us left with some clips that we really dug. We all got a piece on the same spot, which was awesome and kind of the whole idea of this project. Brian did that grass roll to disaster soul to stairbash, I did front unity to stairbash to ledge roll 3 out, and Koda gapped over the rail to ao ledge roll to zero mak to forward.

Koda Hult: Probably one day in August when SK and his girl Maria were in town. We had a really chill sesh at heart plaza with a bunch of Detroit bladers. I filmed two tricks for my part that I was extremely happy with that day. Good vibes all around for sure.

Brian Weis: Instantly coming to mind is a day skating Detroit, a hot one, had a little dude out on his scooter & skateboard with his parents scoping us as we were next to their house. They watched us film and after had us over for freeze pops. Hit the spot!  Oh also watching the final cut and just reliving all the adventures we had over the summer, similar feeling to watching old home movies.