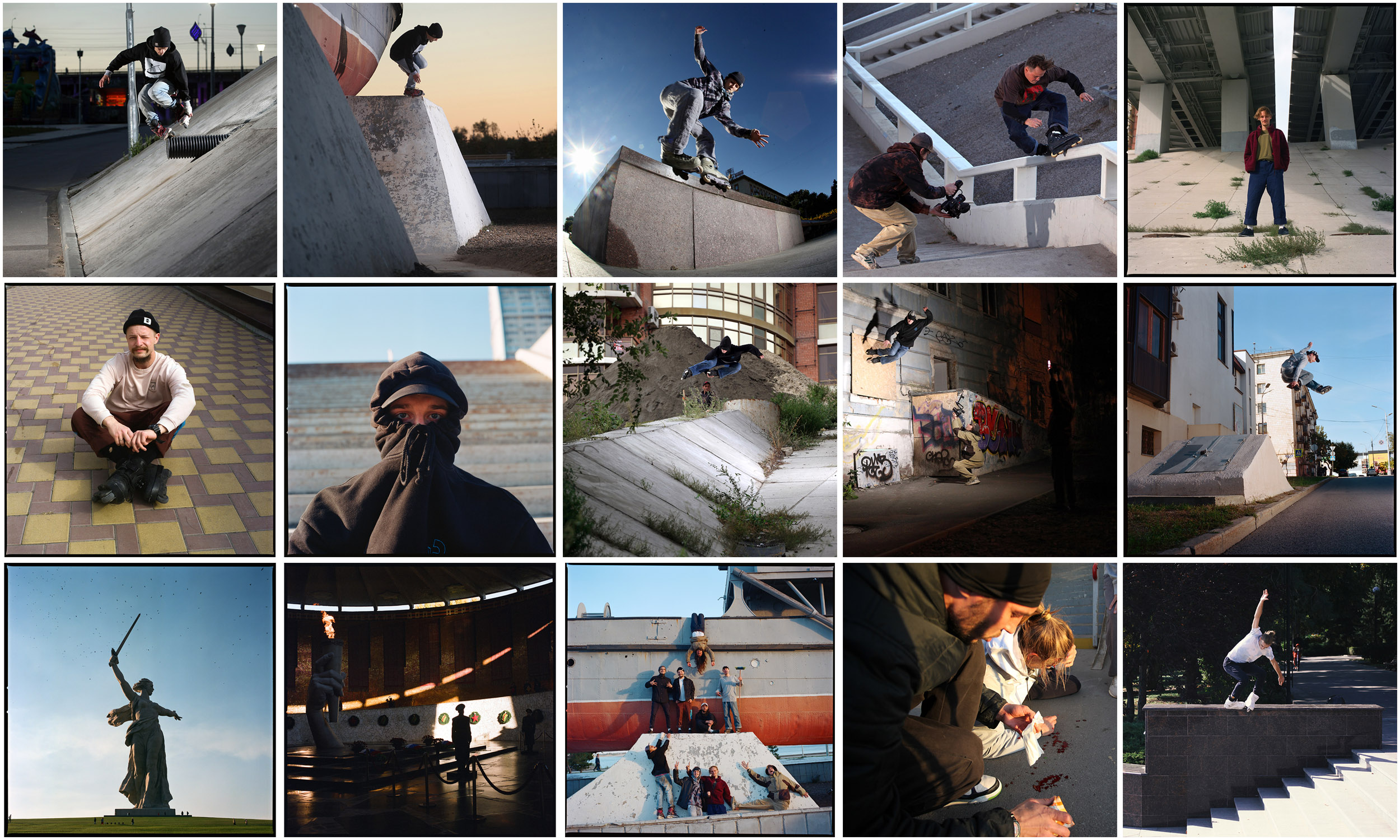 ON THE ROAD AGAIN WITH THE EMBILY TEAM

In early October 2021 we continued our never-ending tour, hitting two Southern cities in Russia and a street contest along the way. Anton Seleznev (aka Selshot) documented our antics along the way for your viewing pleasure. For camera nerds out there, Anton used a medium format Hasselblad film camera (a rarity) for a number of the shots.

We arrived in Rostov-on-Don on September 30th to reunite with the fam and chill at our new base of operations before our favourite type of madness started the next morning. We scheduled a meet up day with Evgeny Leonov to film his treasurous clips on October 1st in Rostov-on-Don the day before the 7th Rostov Open Games.

The first skate day was kicked off by Vova Turkin lacing a phat backside royale on a white kink ledge. After some bangers by Vova and Evgeny Leonov, we headed to a local spot called “Balls” (because of a nearby statue where you can clearly see a horse’s balls – such a classic street spot naming). The rest of the day was chill with an evening ledge session, handing out beers for the best tricks.

Day two of the trip was intense. The contest brought out bladers from all over southern Russian and beyond. The competition was fierce and some serious tricks went down. The results were announced that evening at a karaoke bar, because that’s just how Russians roll.

Vova Turkin was awarded first place, being well deserved despite a free forehead dissection at the final spot (a real cringy kink rail in the middle of some railroad).

Besides Vova and Zhenya Leonov, everyone else continued to film the next two days without any major injuries. That’s the best you can hope for on any tour.

A funny thing happened to us while filming Sasha Sue doing a soul grind at the local Trade Union House. The guard was on the second floor when he saw me standing with my camera. The gate to the building was open, which gave you the run up to hit the ledge. I was all like “okay, I will not film from there. Go away. Sorry. Chill please”.

He eventually walked away, grumbling as he did so. What shocked me is we were filming the trick right as he was arguing with us. It was a hassle dealing with the guard, yet we got the shot.

One of the brightest moments in Rostov-on-Don was immediately after this less than sterling moment. We filmed Vanya Chanchikov doing airs at the luxury spot under Voroshilov bridge. We deliberately chose that day and time for the best light, cleared the spot of glass and debris, and filmed the trick without falling! The moment that made it all come together were street workers digging some heavy underground communications with shovels, standing right under wjere Vanya was doing his air. This mission was a big success and one of the most memorable clips filmed for the new Embily video. We were hugely motivated for the next days!

That evening we jumped on the overnight train to Volgograd, which is the hometown of our teammate Vova Turkin and a number of cool cats in the area.

The next morning, we woke up on the overnight train arriving in Volgograd. Formerly called Stalingrad until 1961 and one of the main points of defense in the famous Stalingrad Battle in years 1942-1943, 1 million people currently live in Volgograd. We are here for six days and despite the palpable fatigue of our bodies having endured a contest and the tour so far, we were still ready to push forward. Daniel Goncharov and Danila Rodin joined us on this leg of the tour.

As luck would have it, we found a quiet courtyard with a graffiti piece saying “INLINEmade” by Inline the crew (a well known graf crew from Volgograd with a rollerblading background). Right in front of the courtyard, we found some interesting architecture worth investigating like this bank/ledge.

The next spot on our bucketlist in Volgograd was a ‘skateable’ ship called ‘The Extinguisher’ (the colors?). Vanya Chanchikov and Daniel ‘Coyote’ Goncharov made for some memorable shots at this location.

The architecture offered different variations with banks and fresh ledges, all of which we took full advantage of. This tho required A LOT of wax. Vova Turkin took care of this without breaking too much of a sweat. Because of his hard work we all shot a photo at this unique spot.

The next few days were cold and windy, which forced us to stop skating in the evening so as not to get sick. Not everyone succeeded in avoiding getting sick (it happens when you’re in the elements and on the streets) but even those with colds still put on their skates to put in work.

We ended the tour at ‘The Motherland,’ the tallest statue in Russia and Europe. Seeing this left a strong impression on me, as well as seeing the entire ensemble of monuments to the Heroes of the Stalingrad Battle on Mamayev Kurgan. We were only able to visit this iconic place at the last moment of the trip, but we’re fortunate to have made time for it!

As the last trip of the year, we have the winter to sort and edit the footage while waiting for warm days of spring to start the touring process all over again. These captured memories will help keep our spirits warm until the days lengthen again. A big thank you to our entire team, as well as Vova Turkin, Olya Generalova, Igor Polyakov and Dima Ivanov. Thank you for making us feel at home, finding missing dishes, and joining us in our quests. We also want to thank the society of the dogs, Hannah and Adele, who guarded our spots, and the cats, Bayun and Lukas, who sat on us without provocation.

A special thanks for this tour to our general producer Alexander ‘Catscratch’ Bychkov and the entire Embily company. Our biggest admiration for your continued support of the best rollerblading team in Russia!