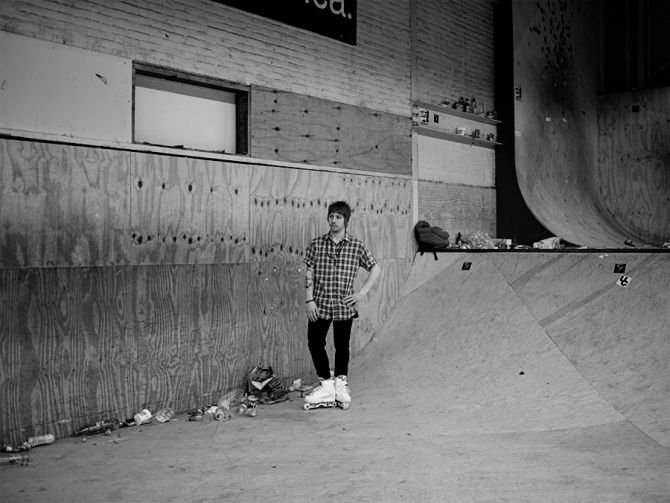 My name is Pietro Firrincieli. I was born in Italy in 1985. I live in Verona. It’s a nice city between Milan and Venice in the north of Italy, but I’m planning to move soon. Maybe I’ll go to Rome or I might even buy a van and travel through Europe for the next year. I pay my bills by doing interior and design photography with Kassel & Wassel, art directing a series of workshops on Design/Art for Oniricalab and doing some videos for Uncò Libri, an independent publisher based in Verona. Next year I’m probably going to switch everything to photojournalism since I want to travel as much as I can.

How did you get into photography?

I got into photography at the end of 2007. At that time it was just a cheap way to learn how film and chemicals work because I wanted to start filming in 16mm and develop, cut and paste everything on my own. I immediately fell in love with photography and I never started filming. In february 2008 I started an internship at a big interior design photography studio where I learned a lot of technical stuff. In 2009 I attended a masters in photojournalism at Contrasto, the major agency in Italy and between 2010 and 2011 I worked at Cesuralab, a collective of photographers founded by Magnum photographer Alex Majoli. I just started the Blade Diary.

What is Blade Diary?

The Blade Diary is my personal diary of the rollerblading culture. It’s primarily a family album since most of the pictures were taken in Italy and feature my friends that are the core of the Italian rollerblading scene. It’s also a document of rollerblading itself. Next year I would like to travel a lot in Europe and the U.S. to take more pictures that one day will tell our story, the story of the rollerblading culture and the first generation of rollerbladers. I would love to print a book in 2014. I want to show our lifestyle and the relationship between blading and architecture to people who don’t skate in a way they can understand. I want people to respect our dedication and art. That’s my goal with the Blade Diary.

Italy has had a skate scene since day one. I started blading in 1996 but some of my friends like Sly Savoldi and Matteo Guidi started a few years earlier. They were in the original team Roces in the 90’s. More recently Jason Adriani and Nicola Fiorenza have made a name for themselves in Europe. At the core of the scene there are some very talented bladers like Nicolò Sabattini, Marco Valera and Nicholas Bertini, to name a few. They just skate and party at the Italian contests. They like it that way and don’t give a fuck about sponsorship or fame. There aren’t that many young guns on the horizon except for Jason Adriani’s brother Gabriel, Jacopo Tonni and Diego Molinari. That makes my worry about our future a bit. It’s one of the main reasons why I started documenting our scene. To keep our memories alive.

You always shoot in black and white. Why?

I do that because I’m producing a document and I want it to be timeless. Colours are always contemporary. You can tell if a film is from the 70’s or 80’s just by watching the colors. If you watch movies like ‘Shame’ or ‘Drive’ in 2030 you will know that they were made now just by the cold and desaturated colour correction. I don’t want to document blading in the 2010 or 2012, I just want to document blading as a culture.

What photographers do you look up to?

The first book that I bought was by Bob Richardson, the father of Terry Richardson. In my opinion he was the best fashion photographer in the 60’s because of the emotion that he was able to put in his photographs. Richard Avedon was the best of all time for sure. I also admire the work of Araki, Daido Moryiama, Stephen Shore and William Egleston from the 70’s because each of them, in some way, switched the attention from the things they showed to the way they felt about them. Magnum photographers such as Ferdinando Scianna, Alex Majoli, Paolo Pellegrin and Antoin D’agata also inspire me. I was lucky enough to be at Cesuralab during a workshop of Alex Majoli and he blew my mind about the role of photographers in the world. The photographers that influenced me the most to start the Blade Diary are Nan Goldin and Hedi Slimane. Larry Clark and Gus Van Sant inspired me with their films too. I could keep going for hours but I just want to end with two of my favourite young photographers: Ryan McGynley and Micheal Ackerman.

My favourite picture is the one I did not shoot yet. It’s an impossible question. Blading wise it’s probably that Alley oop parallel Fishbrain of Dustin Latimer in the ditch with the kid looking at him. That was a shot by Jess Dyrenforth if I remember correctly.

You were run over by a truck recently. What happened?

In january 2012 a truck just cut my path while I was on my bike. I had to brake and flew right in front of it. The truck hit me and I ended up under it, between the two front wheels. Luckily the wheels did not touch my body and the truck stopped right away. I ended up with 5 broken ribs – one was in 3 pieces –, a dislocated shoulder and 2 microfractures in the vertebrae.

Did the accident change your outlook on life?

It changed my life for sure. The idea of the death was just something far and impossible untill that happened. Death became something that could happen just before the end of the day, so I decided to spend my time doing exactly what I really wanted to, day by day. I figure that if I can do something right now, I’d better do it because there might not be another chance. I’m just living in the present and not in the past or in the future the way I used to.

If you could go out for a day to shoot with any skater in the world. Who would you choose and why?

Chris Farmer because he is the most iconic blader in our history and culture.

Be proud of being a blader and just believe in whatever you want to do in your life, the goal is happiness and not money. A big thank you to Be-Mag for supporting me.