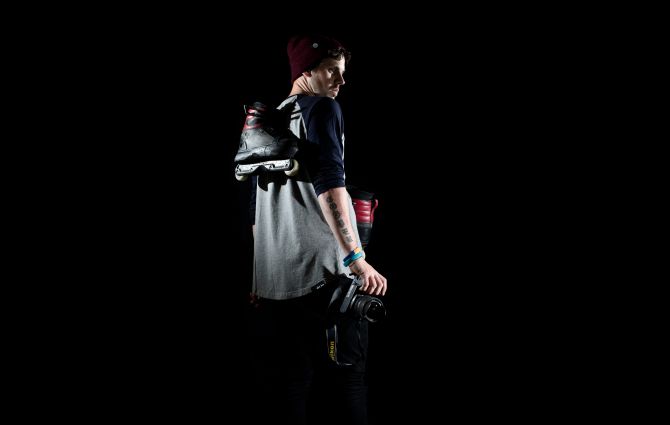 Sam Cooper is a skater and a photographer. For the past few years he has lived behind the camera, letting it take over his life more and more. He is also starting to get noticed outside of skating, pulling in commissions for his highly laudable work. Despite this, he hasn’t moved from the heart of the skate scene.

The past year has been his most successful – both in and out of skating. His work has been used in Clac and ONE, as well as becoming a regular contributor for Wheel Scene. Outside of skating he has been featured in some major photography magazines and has just completed his first fashion commission for Nataliya Kaut London. Working as a freelance photographer has allowed him to shoot a broad spectrum of work, from corporate portraiture to potentially controversial shoots for the Grit scooter team.

Sam’s love for photography filled a creative gap in his life. “For as long as I can remember I’ve been the kind of person who has an artistic outlet of some kind. I would say there are two main factors that eventually guided me to photography. A terrible A-level art course that killed all my love for drawing and painting, coupled with a need to record the skate progression of my mate. With drawing and painting dead to me, as a creative person, I needed a new outlet other than rollerblading. Having someone as talented as my good friend Adam I had the perfect model to learn and practice basic techniques. It all grew from there on, until I found myself shooting everything; becoming fanatical about photography gear and once again seeing the word through the eyes of an artist.”

Sam is almost entirely self-taught. He learned at first through trial and error, as well as taking others advice and reading some photography guides. He felt that education had strangled his previous creative outlets and has only taken one night class in photography in order to learn how to develop his own film and to gain access to a darkroom.

His newfound outlet and skating did not mix at first  “I think it became as big an artistic outlet for me as skating was around 2008, but the two were totally separate, I barely shot skating at all as I had an obsessive fascination with night time imagery. It was in late 2009 during a skate trip to Barcelona I really found my feet in Skate photography and from then could foresee that the two would be directly challenging each other as my main outlet. During that trip I unwittingly shot a whole profile worth of stuff on a good friend of mine, Marat Subkhankulov. Soon after the trip this content became his online Kingdom magazine profile.”

During the subsequent years Sam has struggled to find a balance between his two passions. As he grows older, he admits himself that one day photography will firmly overtake skating. However, he isn’t quite ready to let that happen yet.

Out of the Darkness

Zak Buys – No run up, no landing! Royal up Bank Mute over Platform into Bank