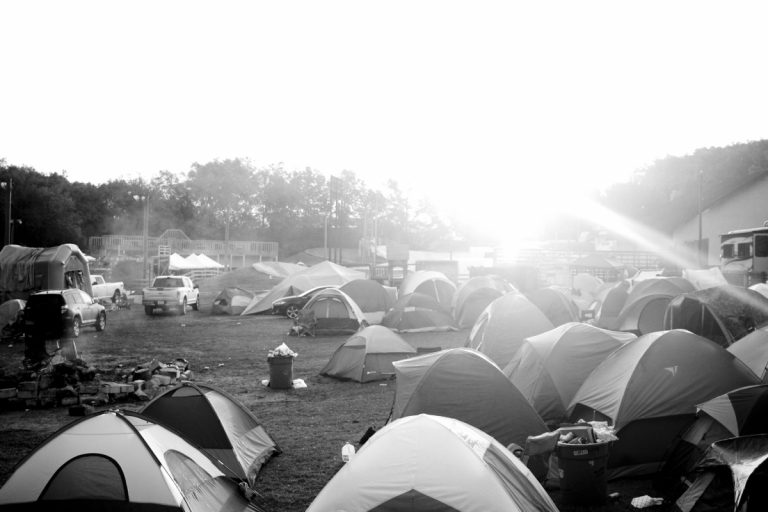 Pow-wow 2015: Camping in a skate park with your friends

The genuine pleasure of, as an adult, dispensing with the pace of a many faceted life to concentrate on the pursuit of one activity is rare for an increasingly large demographic in rollerblading. We lead busy lives chasing goals and contributing to households; making rent, working multiple jobs and studying for future careers. The opportunity to cut loose from the maelstrom and drift into calmer waters in search of a pure rollerblading experience is rare, and Pow-wow is one such event.

Pow-wow is different to most skate events that have risen to prominence in the North American scene, and along with the North West tour it builds the experience around more than just the event itself. Bittercold was such a magnetic event that it had in the past led to the overshadowing of Pow-wow for many (travelling to two winter events was hard to justify) but with its passing, the lure of sunshine and fair weather in March became too strong to deny. North America needs its answer to Winterclash, and in the Pow-wow it has found it.

As with european events like NASS, Roskilde and Summerclash, camping in the park itself is an integral part of the experience- more important than any real competition that takes place. The last camping and skating event I’d attended was an early NASS, so after the cajoling and bluff-calling of my close friends I booked a flight to Jacksonville. The date approached with an air of excitement and apprehension I’d not experienced in some time; four days, five nights in North America’s oldest skate park with a blading roll call of ever increasing magnitude rapidly became the only thing our band of travellers talked about. Daily texts took our minds away from our reality of sub zero conditions and daily snowfall.

Pow-wow was everything we’d hoped for, and far exceeded our expectations. I cannot recommend it enough.

The camping itself took place in one of two areas- either the pro / sponsor section behind the vert ramp, or the camp ground around the fire pit or below the street course, towards the creek. In tune with the open and welcoming feel of the event, campers were free to pitch their tents as they saw fit, and small micro-communities sprang up sporadically as more and more visitors arrived from far flung locales.

With each new series of arrivals the feeling of community really began to build. Regardless of personal style, trick vocabulary or your demographic within rollerblading, you had chosen to make the pilgrimage to Kona to be a part of something, and to be among like-minded individuals; people who appreciated the activity you love with the same intensity. No areas of the campsite felt off limits, and there were no egos or posturing- any blader was welcome to pull up a chair, crack open a drink and introduce themselves. The blader to your right who you just met hands you another beer from the cooler and you cheers. Ten minutes later someone suggests a bowl session or a fakie line through the snake run and your skates are on your feet again for the seventh time today, and it’s two in the morning. You climb into your tent smiling, knowing there’s another day like this when you wake up. Pow-wow is intoxicating.

This year was the first Pow-wow to include an extra day of events, but some campers weren’t able to stay the Sunday night. Those of us who stayed were left with the feeling that we’d been trusted with the keys to this amazing and rapidly emptying playground, and despite weary limbs we pushed to squeeze all the skating in that we could physically muster.

With a modest shower section, the use of the Kona facilities by day and the crapshacks at night, our basic hygiene needs were met- although I’m assured this will be improved upon for next year. The majority of visitors chose between trips to a nearby Waffle House and the adjacent border of woodland scrub and creek when caught short.

The Florida weather is a character of its own, and can really test your preparation. Despite projected rainfall on three of the days of the event, we only really experienced one bout of rain severe enough to curtail activities, and the heat soon took care of the wet floor. I’d never experienced weather like it, and coming from the firmly seasonal weather of Toronto I was shocked how quickly conditions could fluctuate. We arrived on the first night to dew and cool air; we awoke to rapidly rising temperatures but a deep, blanketing fog which rolled out over the course of the first day. Following days were a mixture of intense sunshine and blue skies, progressing through rainfall that hung in the air but failed to settle, to chilly nights that justified bringing a sleeping bag.

The Pow-wow is a skating experience I urge you to mark on your calendars for next year. It is a world class event crammed full of the best talent in rollerblading and deserves to flourish into a packed celebration of blading. The trade show section showed great potential and with higher attendance that can only improve. While all these things are arguably solid reasons to attend in their own right, it’s the friendships, cameraderie and the empowering feeling of community that will bring me back next year more than anything else.

As an aside: At the core of the Be-Mag msgboard are a group of rollerbladers from around the world who have spent the last decade debating their passion with their peers; mocking them, choosing sides, arguing and grudgingly growing to respect each other over time. To have the opportunity to meet so many of our weird family in one place and to immediately fall into easy friendship with those people is an incredible thing. Hello to Ian, Michael, Rob, Greg, Kevin, Ant, Krans, Dolphin and Geoff- it was a genuine pleasure to meet you. See you next year!