Jo Zenk and the Euro Remz crew consisting also of Evert Lubja and Michael Witzemann with their Razors sidekick Alex Burston embarked on a week long journey earlier this year, that resulted in an awesome video section and story. Here’s what happened, straight from the horses mouth. Well, from Jo’s, Alex’, Michael’s and Evert’s, that is.

Jo: #Remzweek. It’s been a ride! Planned months before it actually happened we had to switch plans a couple times and therefore were pretty happy to meet up at Shred Cologne. I personally spent the two previous nights working since I had to reach in papers within the upcoming week, arriving at the Shred with a bit of a fatigue. Evert arrived by plane from Estonia and Witze spent a long time in the car with his homies from Austria. This didn’t hold us back on blading the comp which rewarded me with a nice third place and doing some updates in between since we covered the week with daily Instagram content you can follow via the hashtag #Remzweek.

Alex: Shred Cologne was great fun, it was really nice to see loads of the blade fam there after not being able to skate or attend any event for so long due to injury. That was a good start. I had no idea what I was going to do the week I had left in Germany after Shred Cologne. There was word about there being a little Remz tour/filming week of some sort and I was to accompany the dudes while I was already in Germany hanging around. Anyway, long story short Evert, Michael, Jo and myself ended up heading to Munster (the home of the master Jo Zenk) after plans with the boss man fell through. We all have Mr Zenk to thank for coming up with a healthy plan and for having us in his humble abode and skate spot filled city. 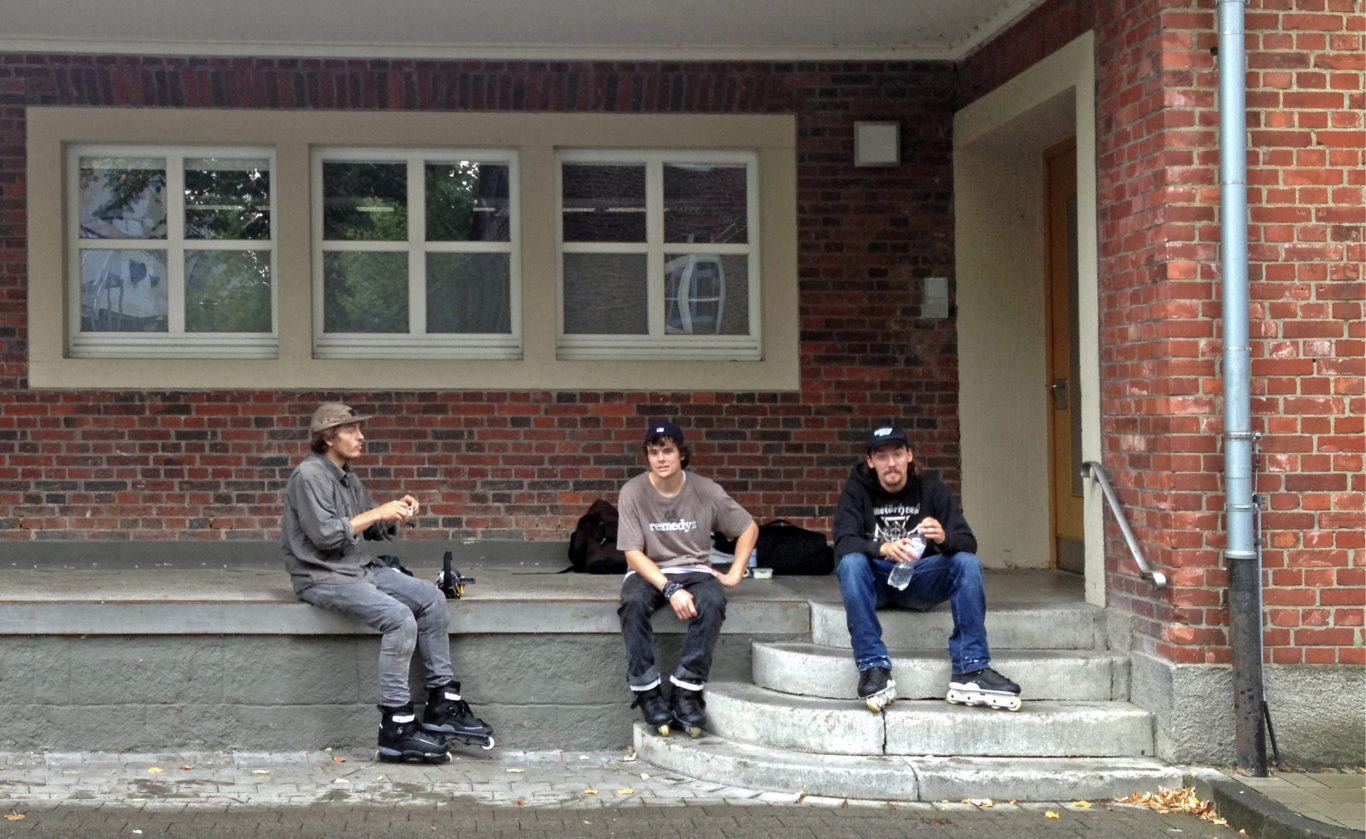 behind the scene/ Jo, Witze and Evert hanging on one of the dry spots we found on the first rained out day

Jo: Switching plans again, we had to improvise the next day since we had no car and going with the original plan became impossible. We improvised and got a train to Münster, where I knew we would have some room in my place as well as reachable spots and the best base I could think of. Alex Burston joined the trip, which would not only add to the spirit of the crew but also would turn out to be a huge help with the filming and continuous Instagram updates. After half a day figuring things out in cologne we were on our way to the MNSTR headquarter. 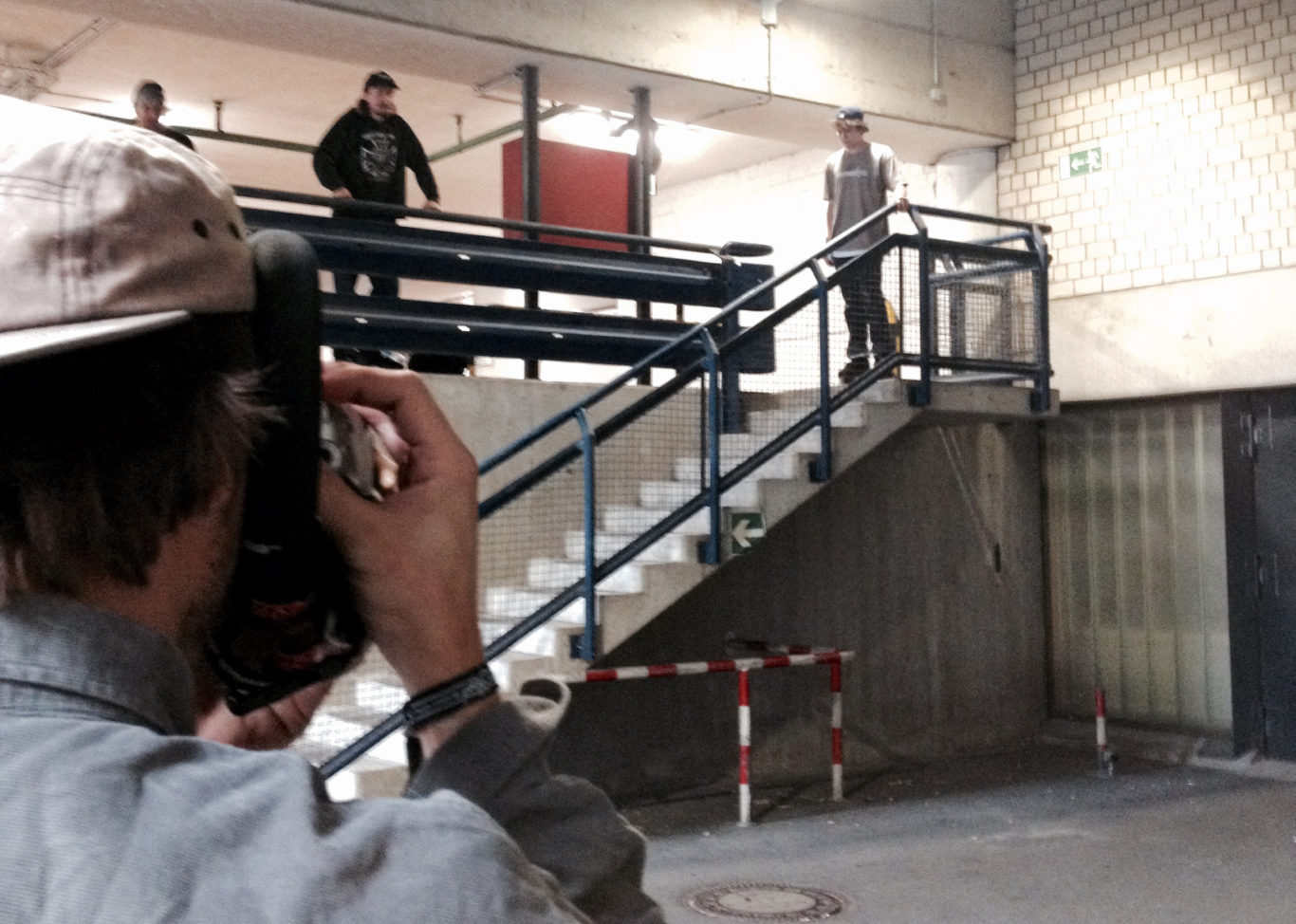 Jo: Spending the first day blading in the rain and searching for nearby dry spots, Witze killed a pretty gnarly drop rail as the first clip of the tour which set the base for the upcoming days. 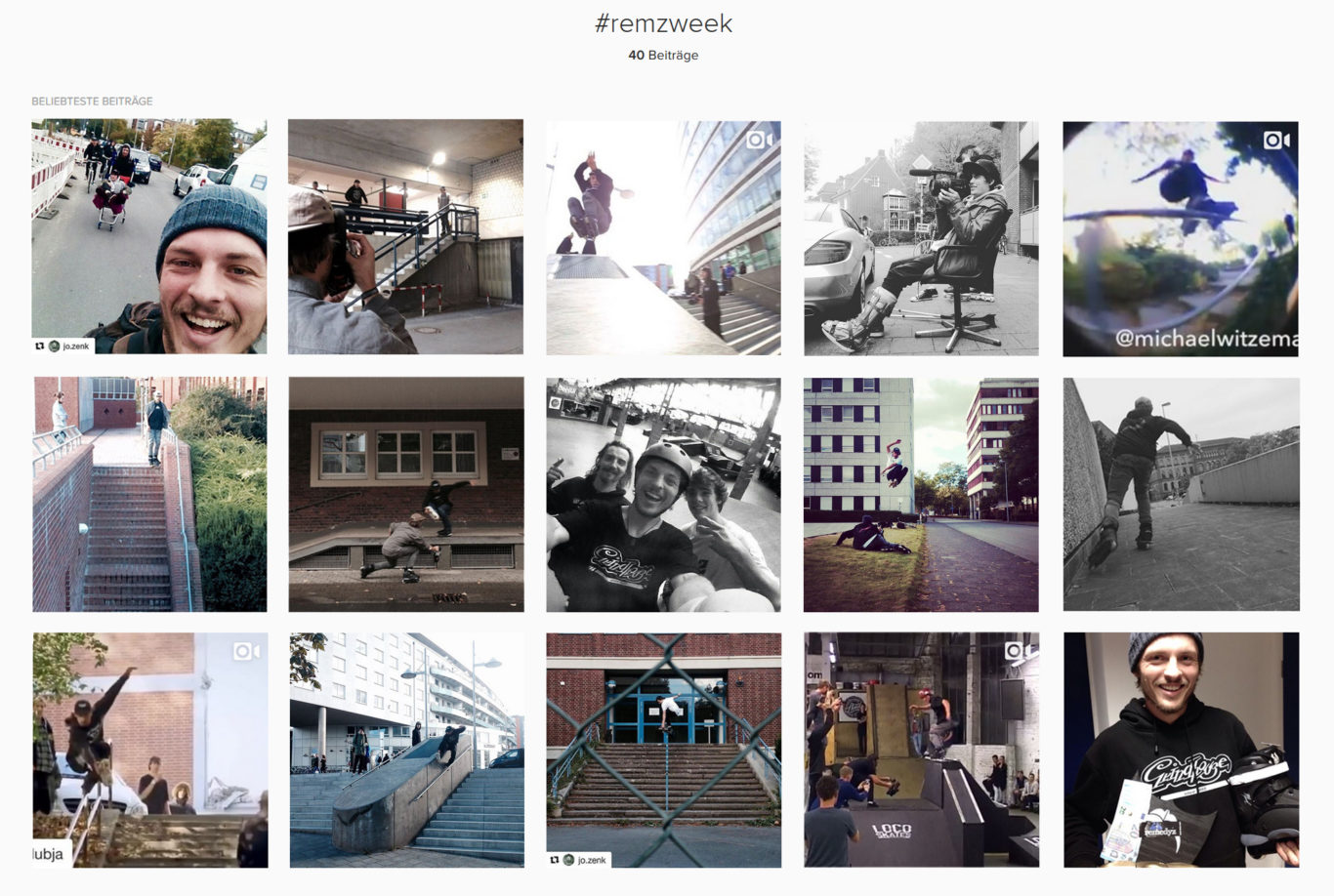 behind the scene/ the crew covered the project through many impressions on Instagram. You can check em out by searching the hashtag “#remzweek”. Many of these done by Iphonetographer Alex Burston

Alex: As I was a bit injured from Shred Cologne and Frankfurt the week before I was on camera duties. Which was a pleasure. I was also the official “Iphonetographer” and HYPE MAN for the week hahaha!
It was really fun running around like a mad man trying to find the best angles for an Iphone photo. 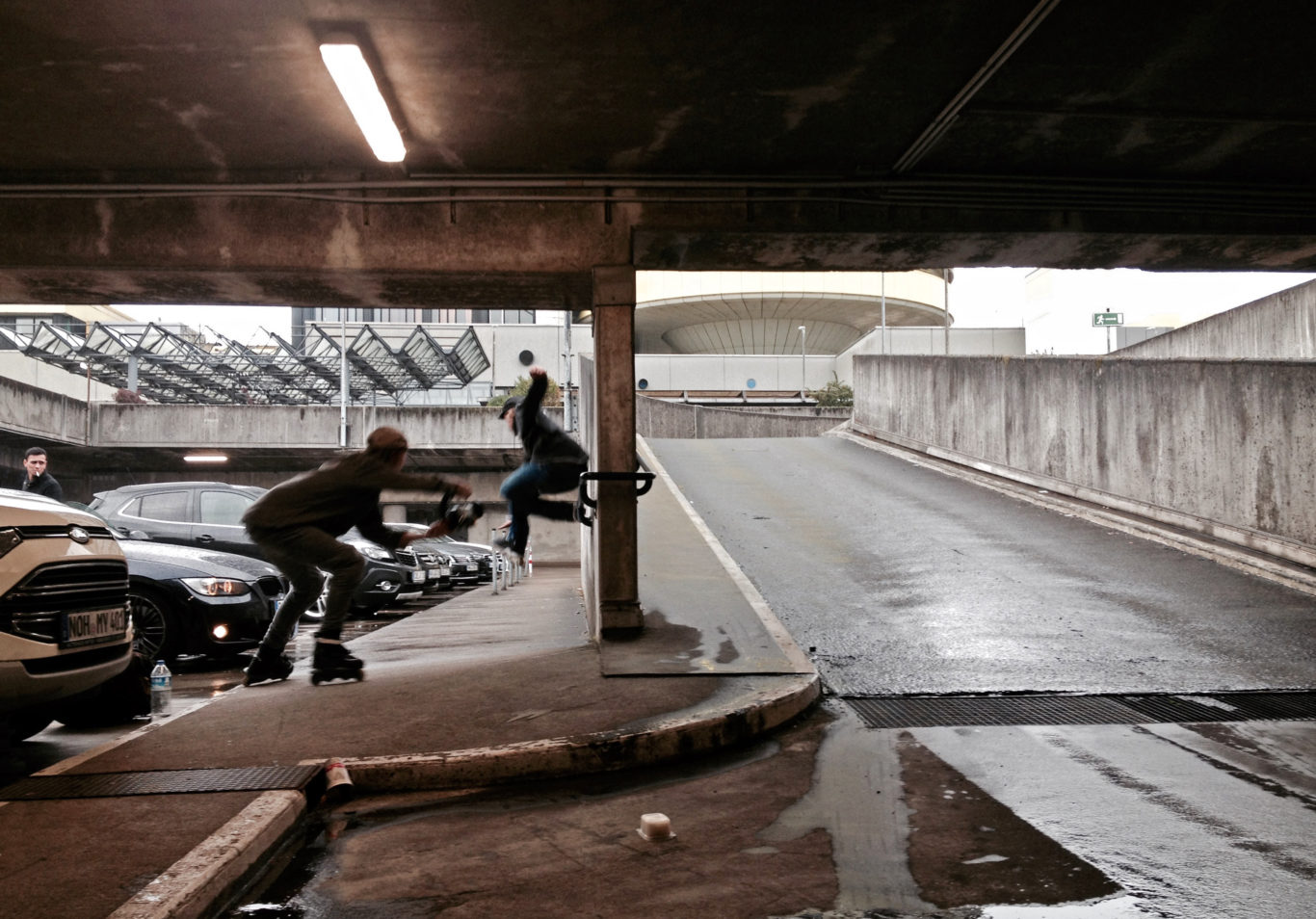 Alex: The weather was up and down all week, Evert got hurt on the first day but still went hard all week, Michael broke his ankle on the second to last day I think it was but he also stacked up a nice amount of tricks, master Zenk was just on full form all week. Super Saiyan For sure!

Jo: Lucky enough to have friends around, our good friend Aleks Popvasilev helped us out offering his time and car so we could skate some spots further away the next day. This time the weather was in our favor and we got some great sessions with the Borklyn Zoo homies joining what would become the last days of summer over here. 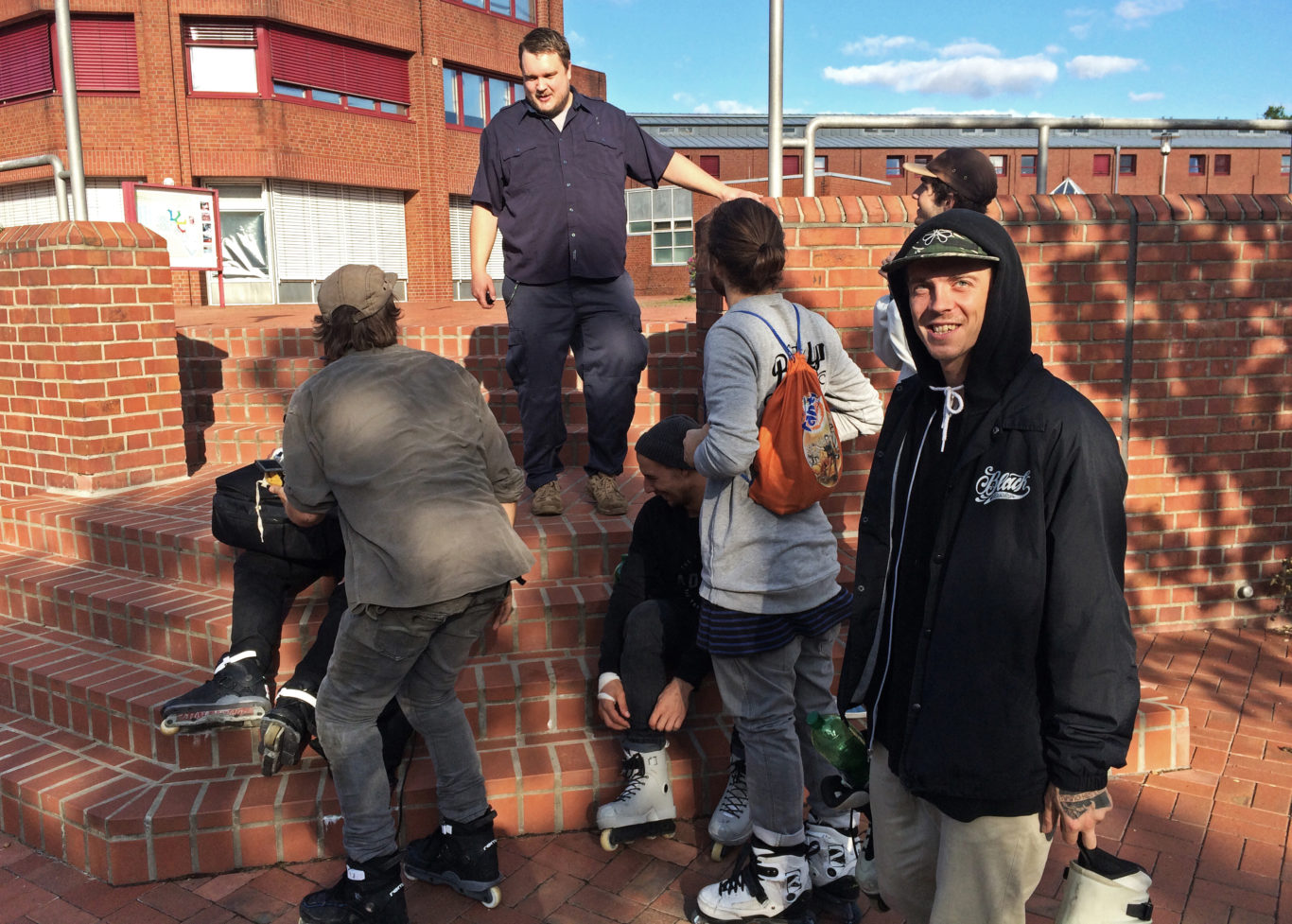 behind the scene/ best friendly kickout ever! Security: “Back in the days I skated aswell and even jumped on some rails. I understand. You can proceed if the other guys pack the stuff already. Make it look like you leave. I would get problems if you don’t but there is a 5 minutes window until I would have to come back and call police” (picture: taken after successfully getting that clip and leaving the area – he joined for a quick chat – or maybe to catch some positive energy flow for the rest of his shift) 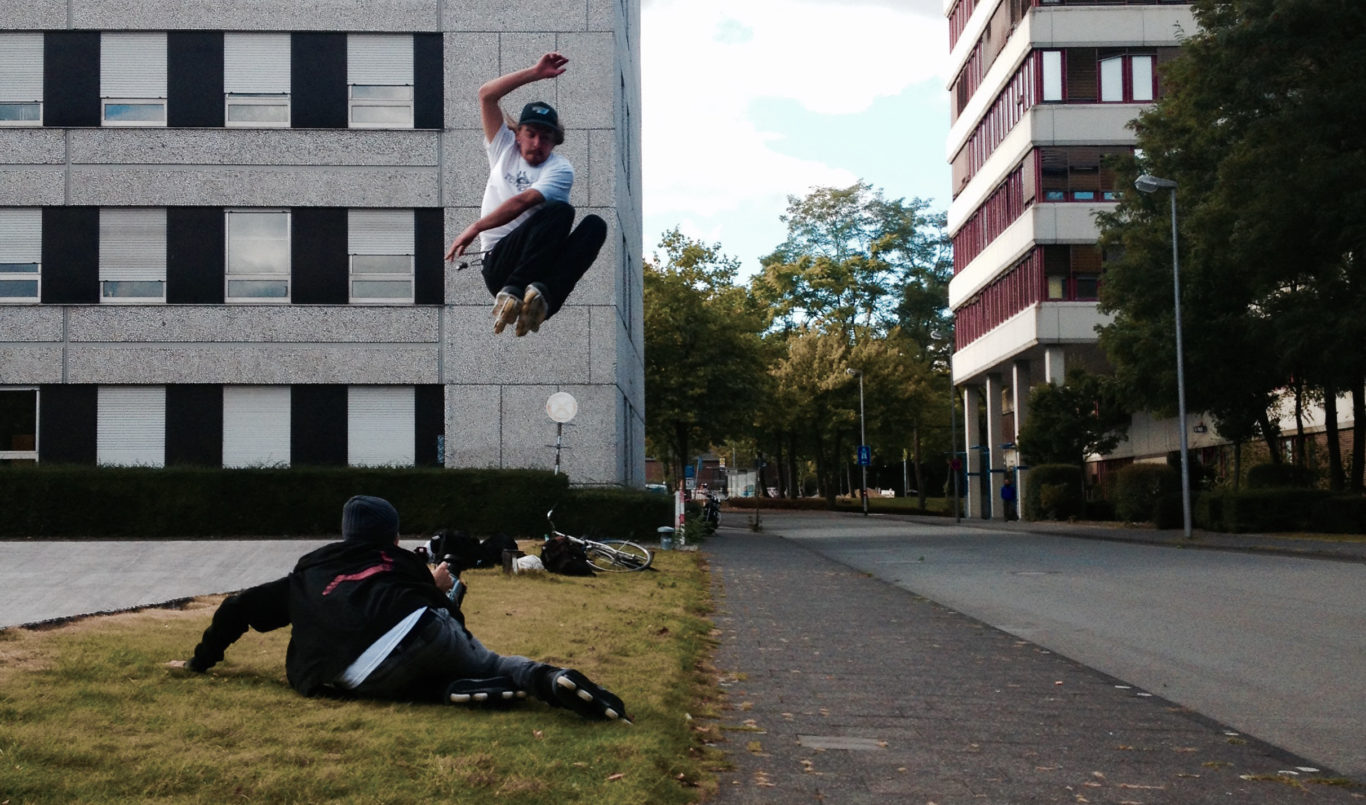 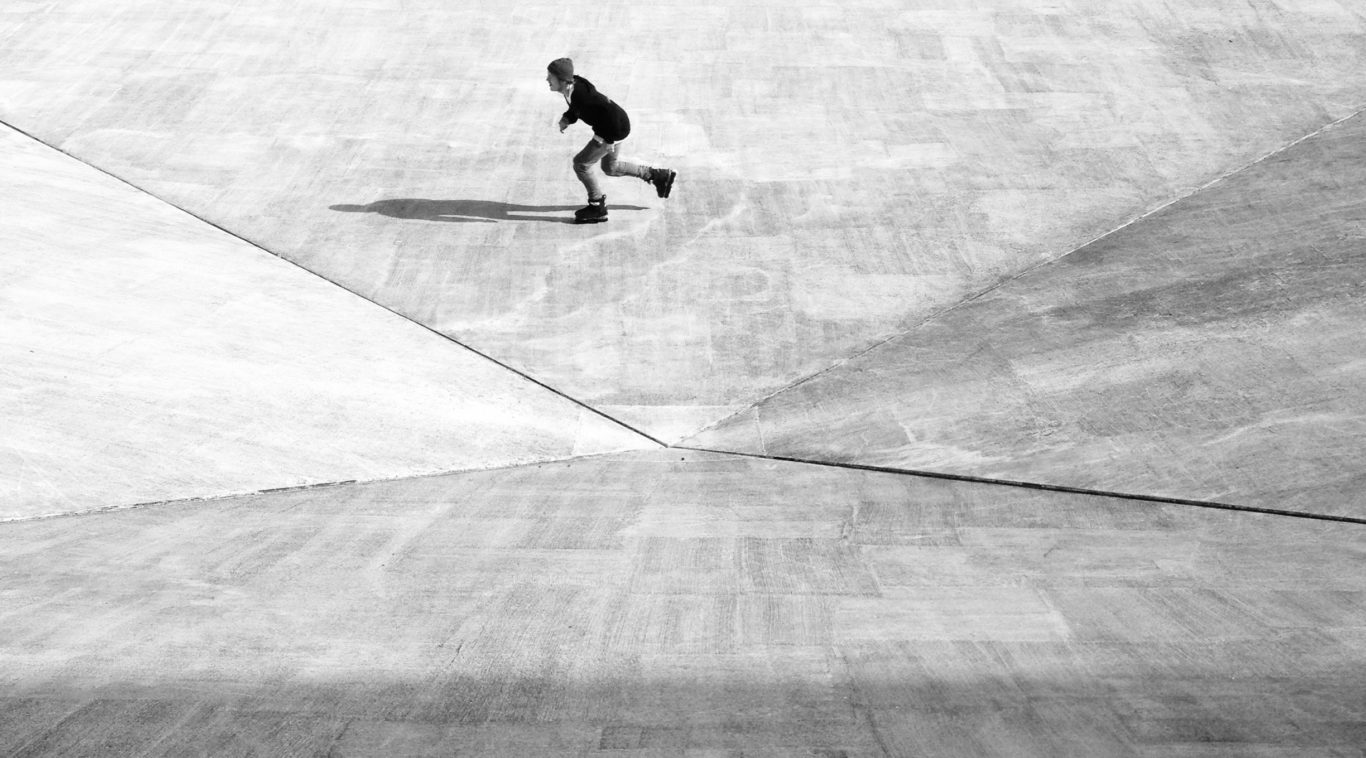 behind the scene/ just a few hundred meters away from the MNSTR headquarter, Jo is getting that fisheye angle with Evert shooting a massive five 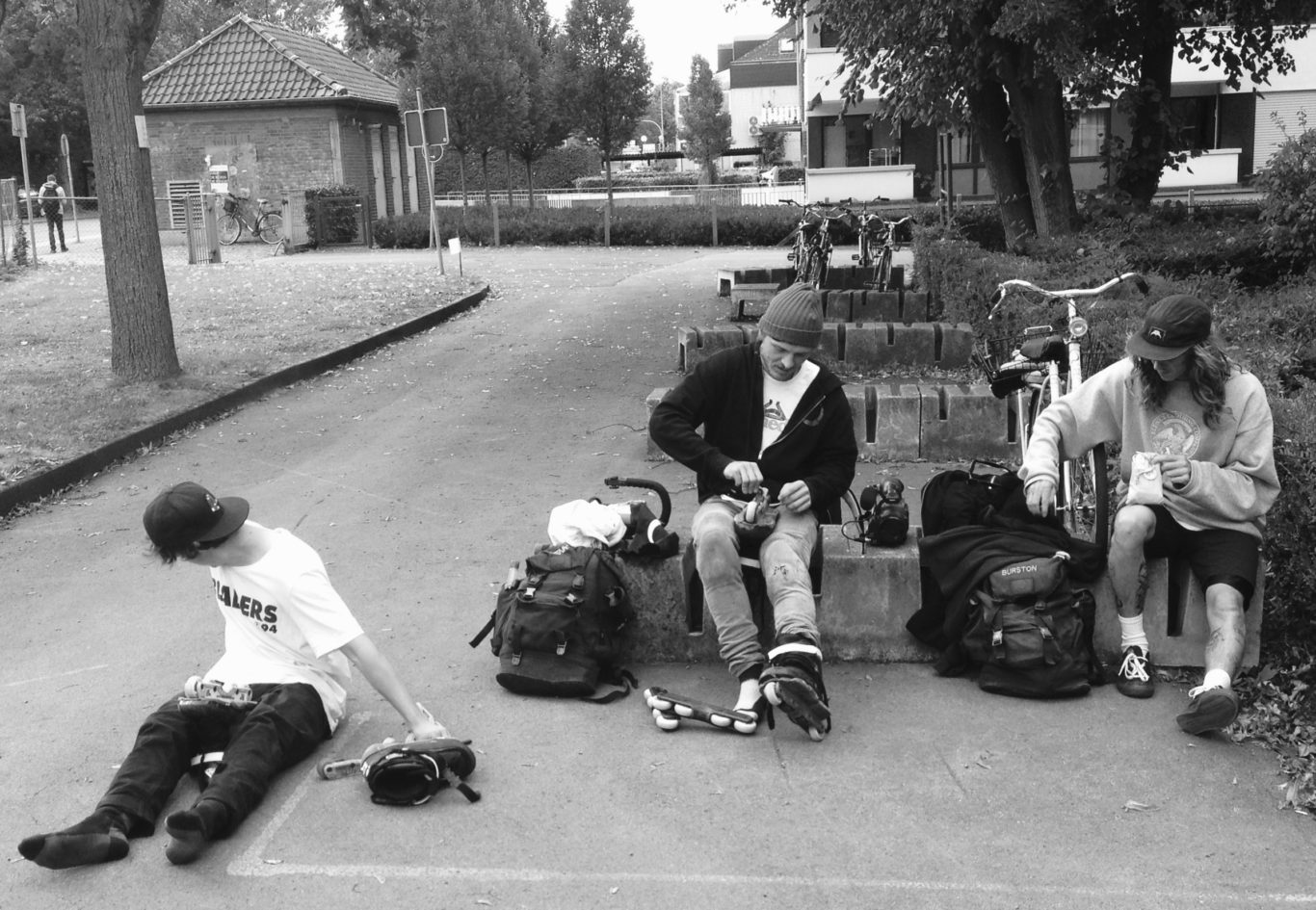 behind the scene/ crew hanging and switching setups in between spots

Jo: After a good start we spent the third day almost completely around the hospital since we had no car that day and went there by bike to skate a kinkrail on hospital ground. Unfortunately Witze fell bad after a quick session but he could not have chosen a better location to break his leg since we were right at the emergency ward already. Still it was a ride and we were lucky he got helped pretty quickly.

Michael: I was on some tours for the last couple of years, but no tour was as powerful as this one. Ups and downs, beginning with 3 clips a day (each) and pretty much ending for me when I broke my leg on day 4. 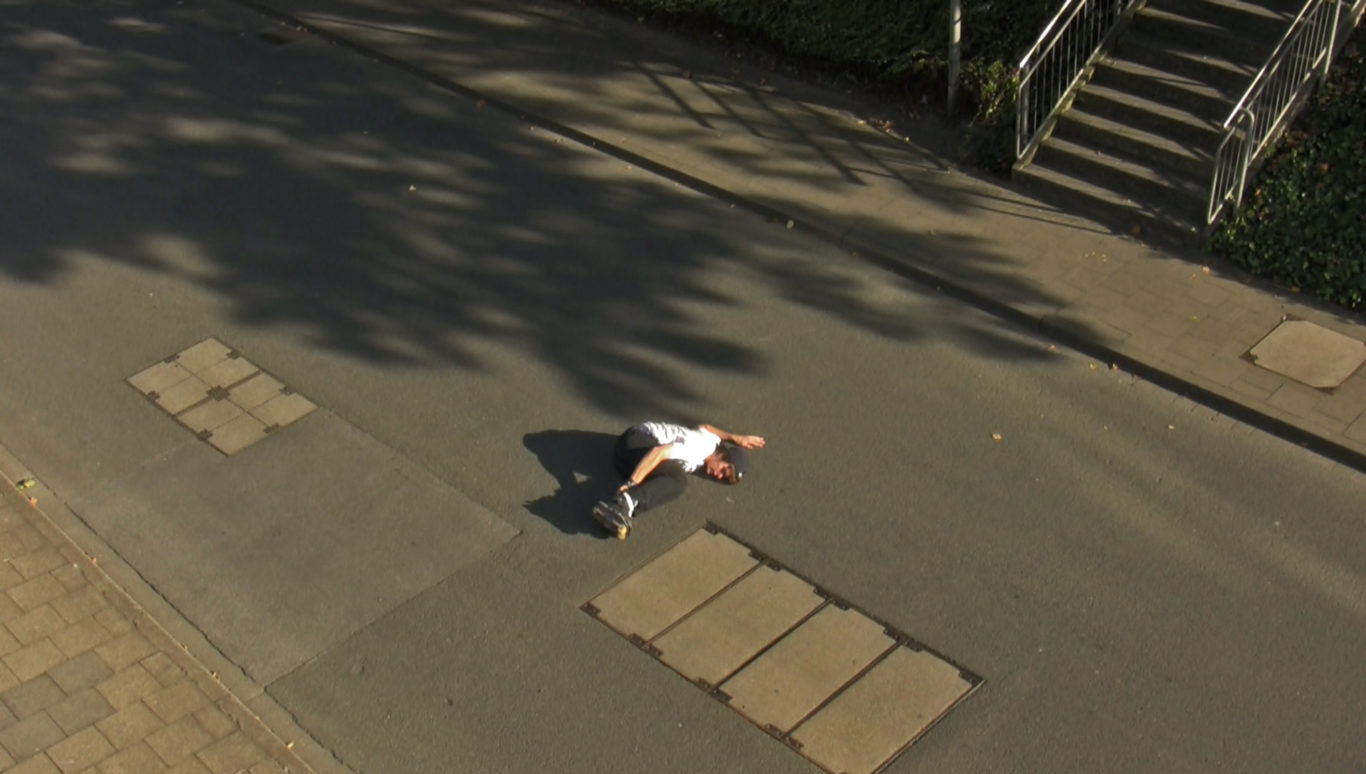 Jo: It went dark already when we left the hospital, placing Witze on a bike and moving him all the way back home afterwards to get some good food.
Alex: The week was great, everyone was very motivated, Jo had a lot of spots in mind and we ate like kings every night! I will never forget that burrito/wrap session we had!!! My mouth was watering as I wrote this. The best!

Jo: The accident didn’t break the spirit though. We went out the next day again. With a few bikes and the help of MNSTR resident Patrick Smith we equipped a shopping cart with just the right amount of pillows & blankets to keep Witze warm and comfortable enough to join the session even though he would have a big cast around his leg and crutches to move around. He spent this last half of a day filming Evert, Patrick Smith and myself trying to get some last clips even though we were very limited and slow with the shopping cart. “
Michael: With the help of these great people, I still had a chance to join the sessions – armed with my camera – while being “transported” in a shopping cart haha. 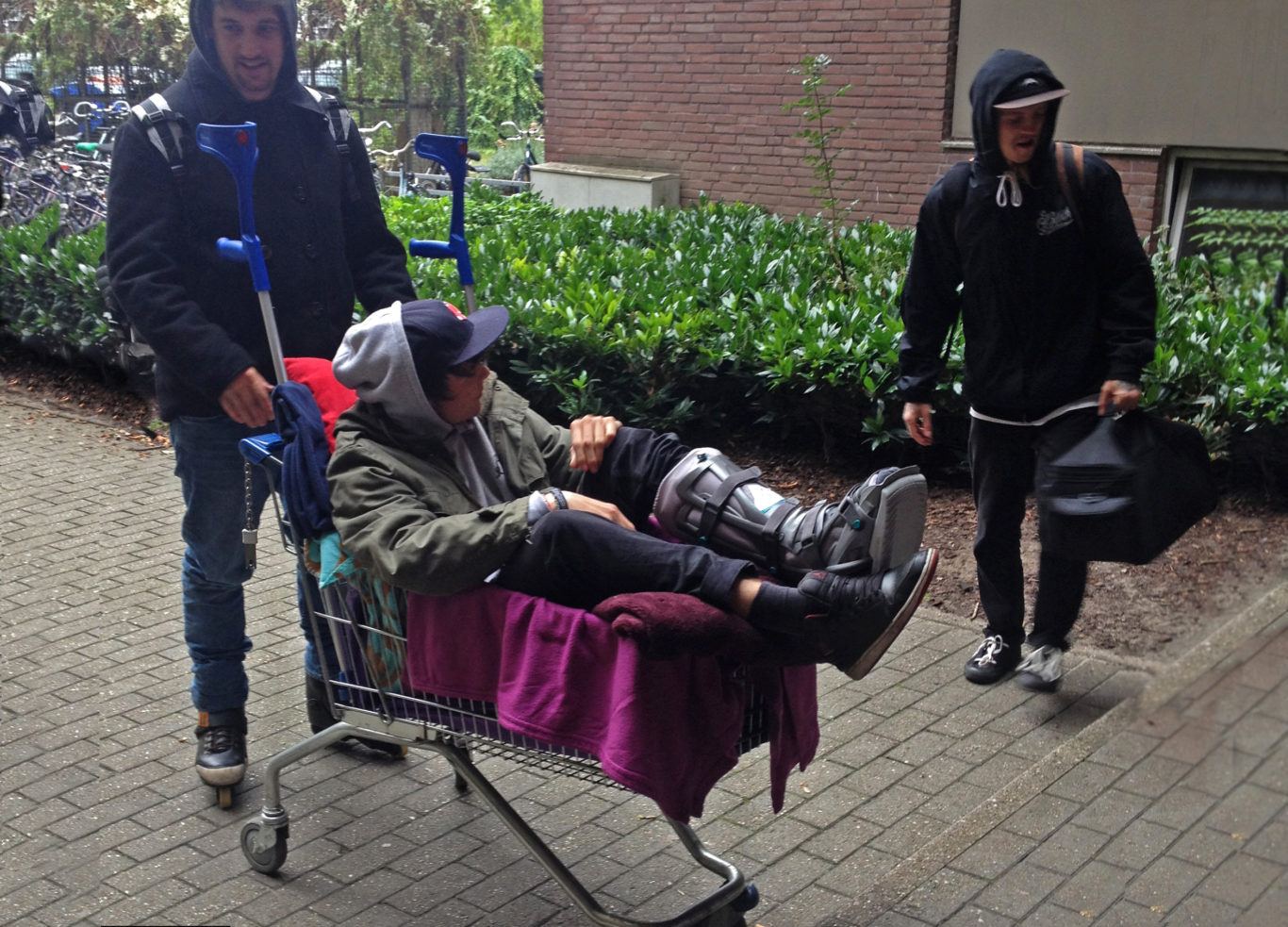 behind the scene/ the next day some more improvising was necessary. Patrick Smith helping out the disabled

Evert: The best memory from everything was……. Fucking people never gave up. It rained, we freestyled, we got shit done on an everyday base, fuck Michael broke his leg and he did not give up on the #remzweek. We always found a way to get shit done.

behind the scene/ Witze kept stacking clips. This time with Jo flying over

Jo: After barely three full days of blading the streets we still found ourselves very pleased with what we got despite the difficulties and hopped Deniz Baethke’s car south to Nuremberg where the Razors Real Street Jam would take place the next day. 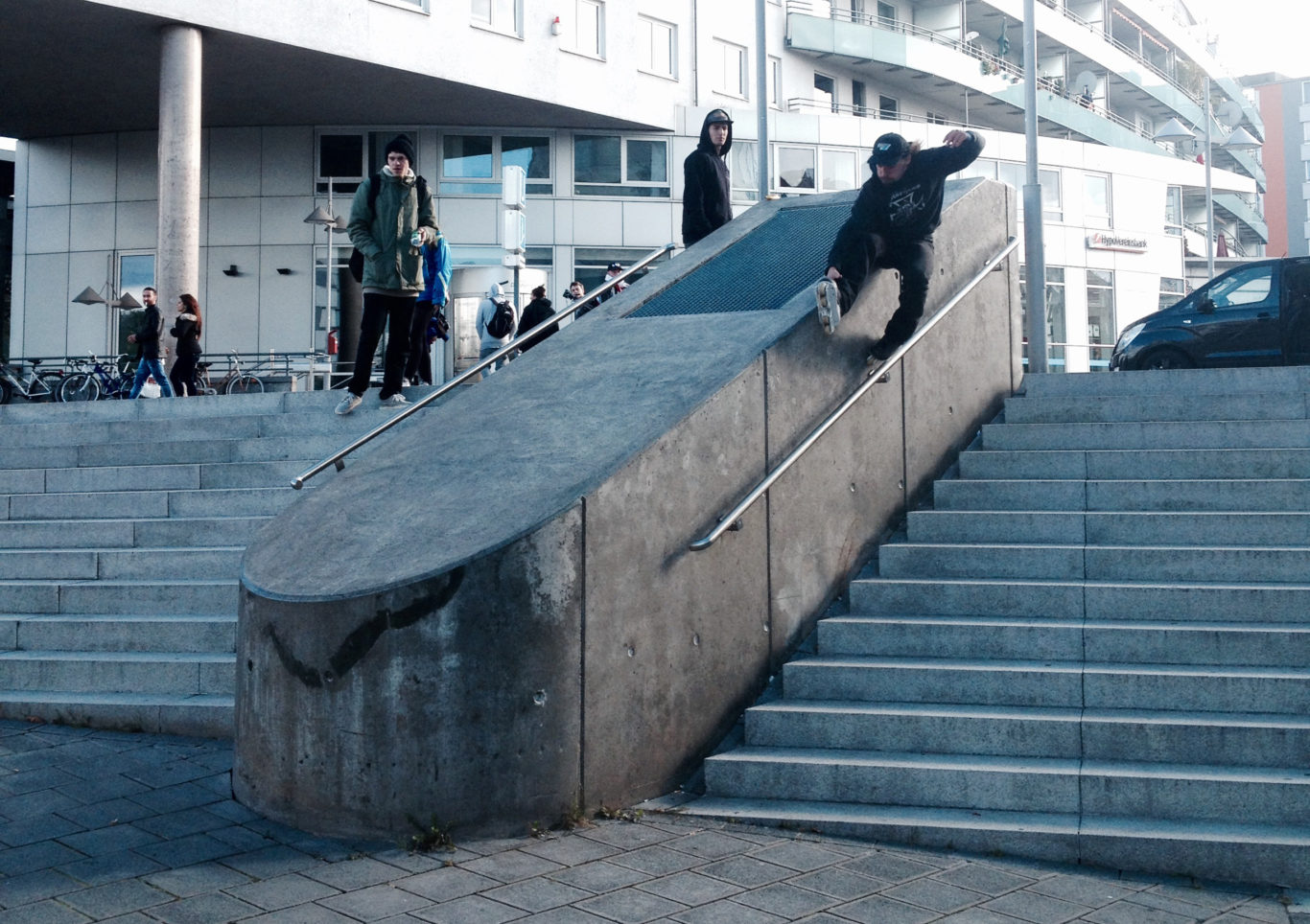 Jo: Since we were all pretty tired from a week of ups and downs we went to NBG without expectations. Witze would spend the day filming while Evert, Alex & I skated the comp. I could not have been any happier to end #Remzweek with a bang and claim first place of the Razors Jam for #Remzweek. A great week with great people. I love all of you guys! Some ups and downs we managed to get over some better than others but I’m glad it worked out that well!

Michael: So at this point I really want to thank everyone who joined me/us on this crazy week, everyone who kept pushing it to the limit and everyone who helped me with my injury – you know who you are. Now on the way to (hopefully) full recovery! PEACE 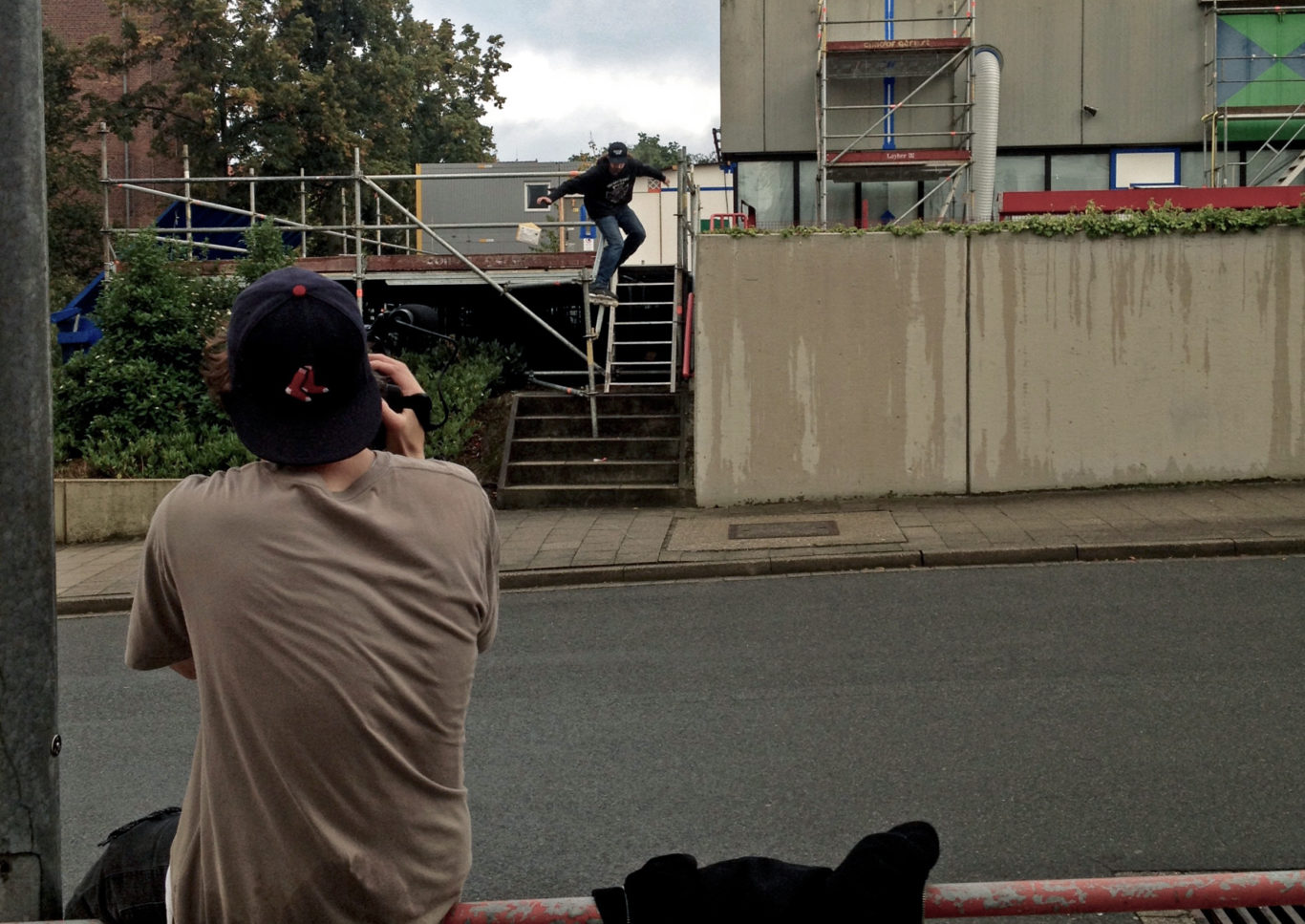 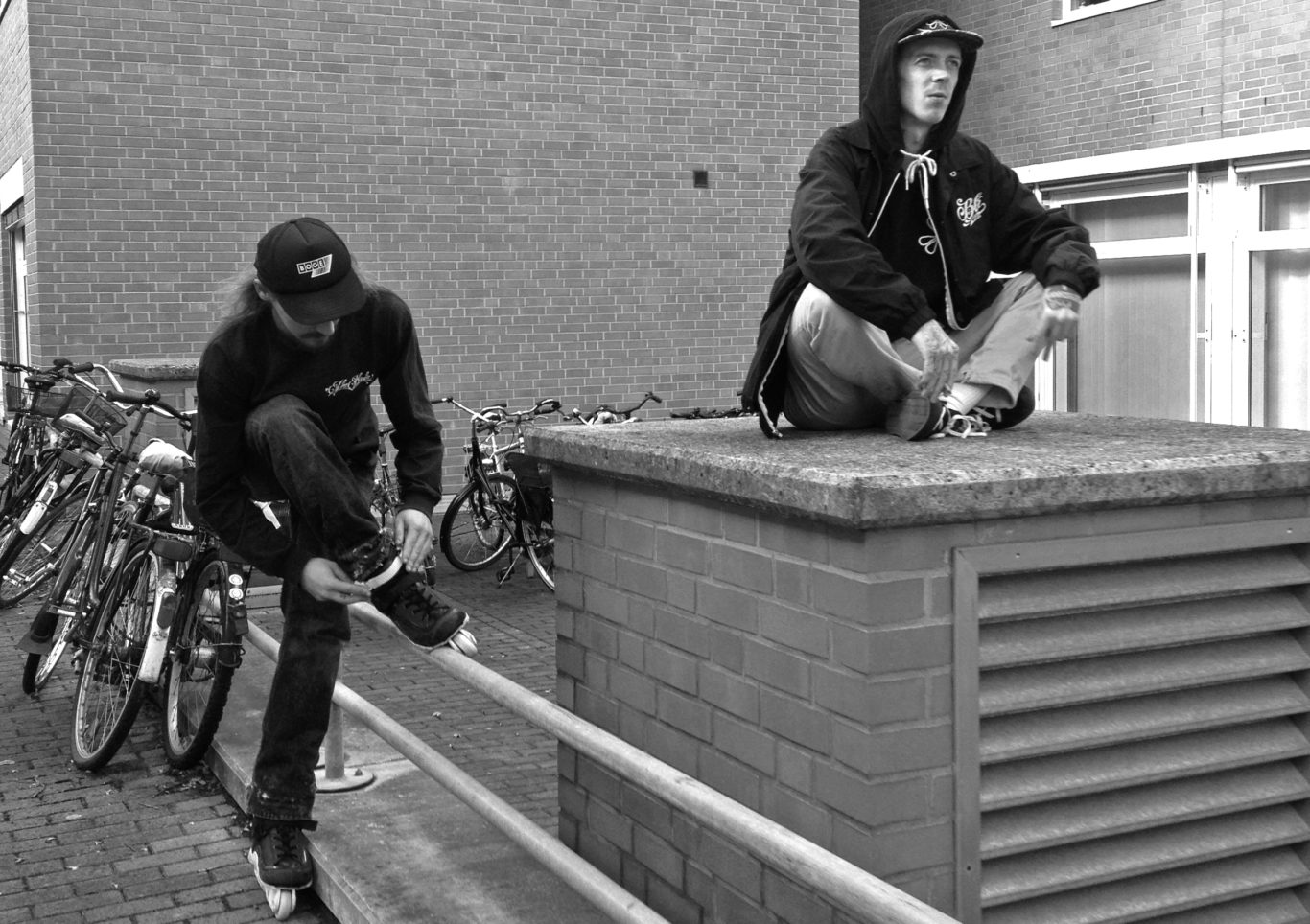 Evert: Remzweek was one to remember! Big thanks to Jo for keeping everything in check and looking after us. You can’t beat the German efficiency! Alex for being the best hype man out there. And for making some 5 star michelin level cooking happen. Michael for sticking with us after the injury and coming out and filming everything. Everyone killed it and I’m happy to call those guys my family! Thanks buds for some epic memories. Shoutout to Remz and The Blade Clothing for always having my back. 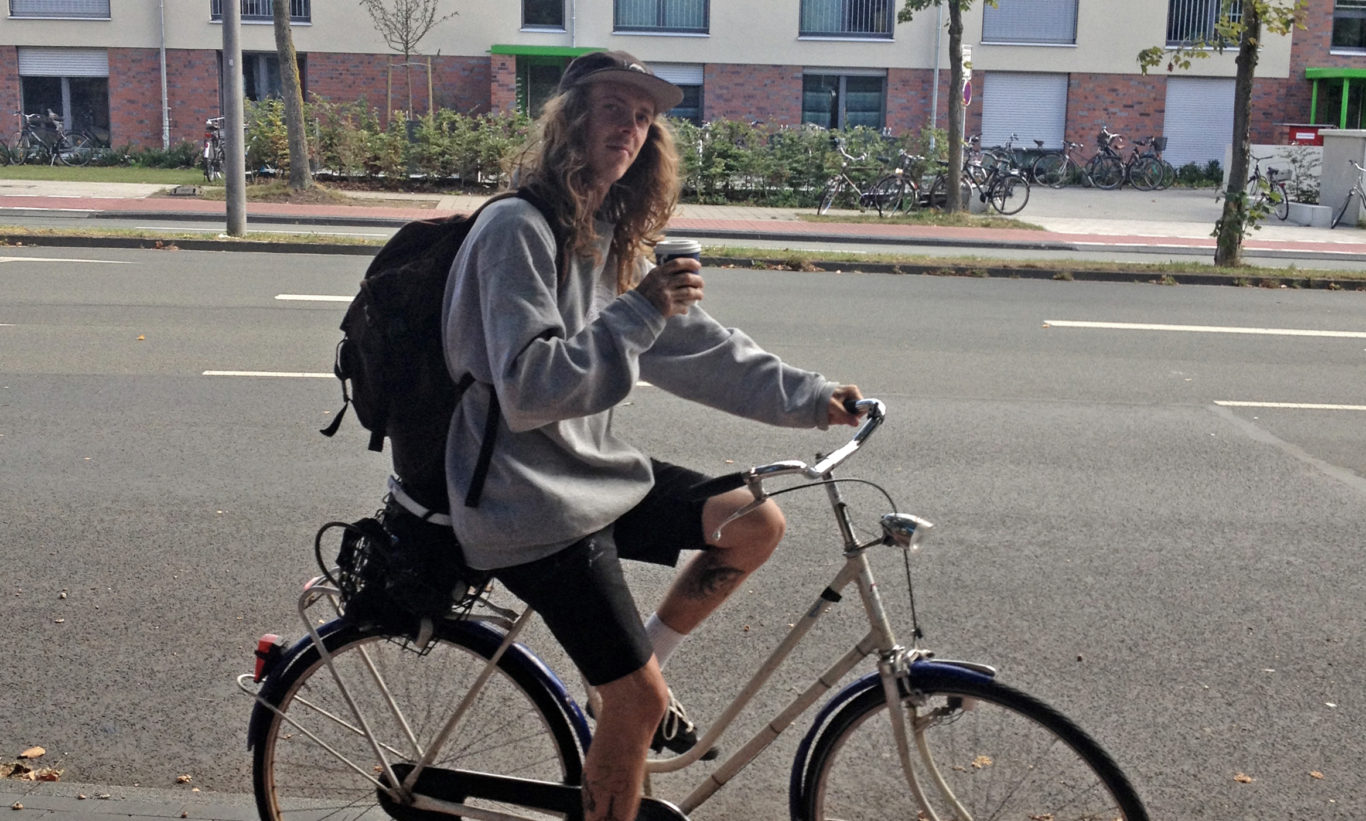 behind the scene/ Alex treating his back and palate well
Alex Burston: All in all the week was a great success. Although Michael ended up with a broken ankle everyone was happy, everyone smashed it. Even me being the Remz mascot for the week, I smashed it! Haha I’d be more than happy to be the Hype man and Iphonetographer again any time. Thank you lads for a really fun week! Big up Master Zenk for being on point and for being a great influence on the lads and myself. For skating and for life. Thank you lads! NOW LET ME SEE THE EDIT! Peace.