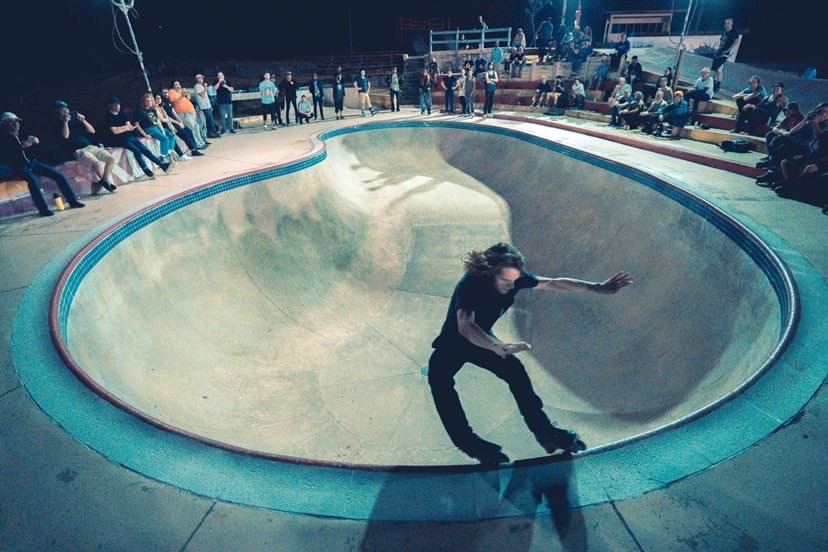 SHINING A LIGHT ON POW-WOW WITH JOE ATKINSON

The Panhandle Pow-Wow competition was resurrected after a 4 year hiatus and the anticipation for the return of one of the biggest blading events in the world was quite high. The social media world was buzzing after pictures surfaced of all of the new obstacles being built at the famous Kona Skatepark, which happens to be the longest running privately owned skatepark in the world. Then the unthinkable occurred. The rapidly spreading pandemic known as COVID-19 had world leaders in a panic after reports of infections drastically escalated and the amount of medical supplies and respirators needed to aid those infected are in short supply.

So the biggest monkey wrench imaginable had just been thrown into the gears of the Pow-Wow and left the organizers and participants unsure if the event would even take place. Kona Skatepark, had already started seeing participants coming in from all corners of the globe for the event and now they were being advised by the state of Florida and the Center for Disease Control that they would have to implement a strict occupancy limit if they were going to continue. That left only registered participants, media members and organizers entry into the event. Outside spectators would not be allowed due to the limited space available. Also the organizers and all participants agreed to abide by a thirty day social media blackout to bring as little outside attention to the event as possible.

Now that the blackout has been lifted we take the time to speak with some of the participants of the Pow-Wow and get their thoughts on the event that was one of the last major sporting events to happen within the United States. We had the incredible opportunity to speak with blading wonderboy and Pow-Wow 2nd place finisher, Joe Atkinson, about his experiences at the event and how the atmosphere differed from other competitions in recent memory.

Considering all of the multiple events that Pow-Wow holds, what do you look most forward to during the Pow-Wow weekend?

The pool party was a good one, I was a little injured from Winterclash so I had to choose my battles wisely, but everyone shredded hard.

The Pow-Wow and Kona staff added many incredible new features to the park for the event. What was your favorite obstacle to skate or most enjoyable to watch?

The kicker ramp gap into the dodgy 1980s concrete vert was my favorite, it was like getting fired into a pinball machine gave you so much speed into the bowl.

The state of Florida is well known for producing infamous stories. What is the wildest thing you experienced while visiting Jacksonville?

A lot of wild shiz went down people flying fakie butt naked down the snake runs in the early hours of the morning haha! But overall it was a very respectful and chilled environment.

Since you have a first person account of being at the event during the initial days of the Corona virus escalating, how did that affect the overall atmosphere of the event in comparison to previous Pow-Wows or events that you have been to?

I was on probably the last flight to the U.S.A from the U.K before they closed down the borders so I was pretty lucky, a bit of gossip here and there but everyone chilled with their social media posting habits to not bring too much attention to the event and everyone was in this positive bubble. However the Monday after Pow-Wow when we heard the news about the lock down in San Francisco we all got a bit of a reality check.

From each of the events (amateur, female and pro) who were your favorite skaters to watch during this Pow-Wow event?

Too many to say there a high level out there but that guy who hyped the crowd and straight acid dropped from the bowl barrier to nowhere I found that hilarious haha. Oh and we got to see Joey Chase‘s new piece and it’s mental! Stay tuned for that…

Our good friend Fritz Peitzner was seriously injured at the Pow-Wow event. In your opinion do you think making the athletes wear a helmet to compete should be a requirement going forward or leave the decision in the hands of the athletes?

The fall happened in the warm ups of the best trick contest, I didn’t realize it was Fritz at the time. The MC was pointing out the risk of the obstacle throughout the day as it was a common mistake people made over the years, I immediately went to grab my helmet but after that I couldn’t get my energy back to continue, but of course the show must continue.

If you want my opinion I think adults should have the choice but if I’m attempting something I’m really unsure of I will usually let my common sense strap up.

Did you have a chance to skate the terrifying Kona skatepark vert ramp? Yes, no or hell no?

Hell yes! She was a rugged ole thing for sure.

I am sure there were so many noteworthy moments from the event but what was your favorite moment from this year’s Pow-Wow?

Catching up with the SSM crew, the live music, campsite banta and Bloody Marys by the beach.

What makes the Pow-Wow different than other blading events that you have been to?
Strong Grassroots / Summerclash / Roskilde vibes, that’s what blading needs right now. Also the crowd out in the states really know how to have fun, I highly recommend and it will be added to my agenda for sure. Also Blake Taylor and the Pow-Wow crew are putting the work in all for the love of blading .