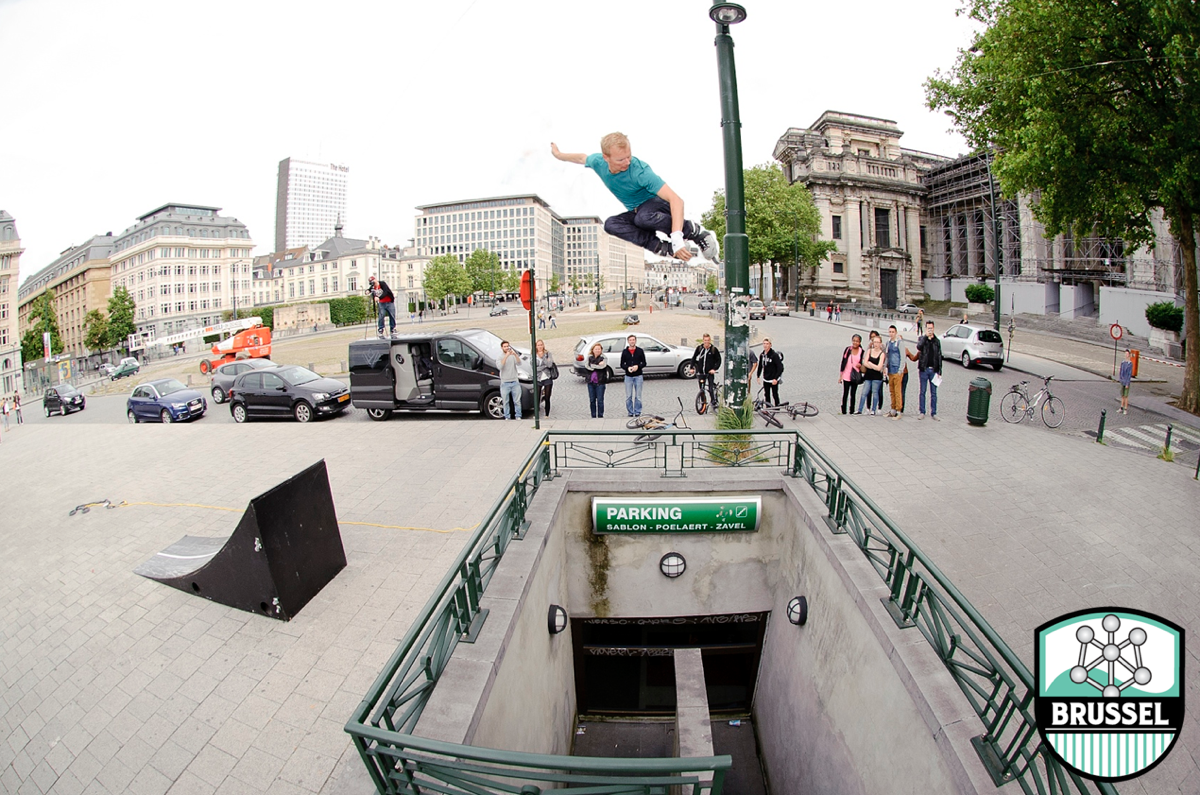 The first Cityhopper footage got released early 2013. Sven Boekhorst and his crew travelled the Netherlands in order to skate famous tourist spots and to capture the action for an outstanding documentary. The success of the first Cityhopper edition made them start thinking about how to expand the idea and to do the same on an even bigger scale. One year later now, the Cityhopper Europe Documentary is premiering at Winterclash, and the trailer looks more than promising! We talked to Sven about the whole project and his first year without doing competitions.

Hey Sven, thanks for doing this with us. Where are you right now and what did you do before you started answering this?
I’m at home watching TV and answering some of the questions, today I worked on SB Events stuff for this year in my small office at my local park.

Its exactly one year since our last interview. In January 2013 you announced that you’re going to retire from competitions. Winterclash was your last comp and people really showed so much respect, even did a „Thank you Sven“ banner and the whole building got behind you when you dropped in the last time. How did you experience that day and how do you feel now, one year later?
What I do remember from it was that it was a great experience and it was amazing to feel all the love. It started as a small thing to stop competing but it turned out in something really official which was maybe a bit over the top as I started to feel pressure the closer we got to the contest.  But if I’m looking back to all this it was a great memory and thankful for all. I noticed the last year it went with ups and downs knowing I’m not competing. Sometimes I felt like going somewhere and to compete but from the other side I can’t wait to visited Winterclash this year without any pressure and just go their for a beer and watch some amazing skating. 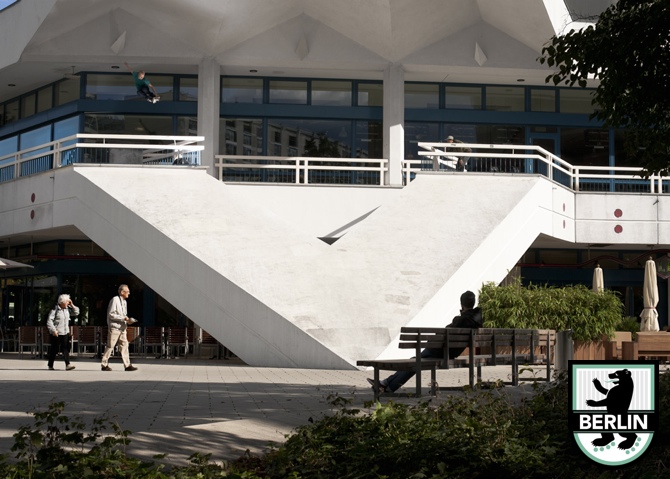 What did you do after Winterclash and how did your 2013 looked like? What events you were involved in or organizeed yourself?
In 2013 I was quiet busy with giving skate lessons to our local riders, some halfpipe demos, 2 team weekend with Rollerblade in Zurich and Prague, Mind the Gap show in Zurich and I organized the Rotterdam Street Battle, Dutch Championships, Dutch Championships Mind the Gap and European Championships halfpipe. But most of my energy went into Cityhopper Europe.

When exactly did you start thinking about City Hopper Europe and what was is supposed to be different to the first one?
It all started when I was doing some interviews on Dutch television were they asked me if I got any future plans with Cityhopper. Of course we joked about it during Cityhopper Holland but at that moment we were to busy to make a success of Cityhopper Holland. So after all the positive feedback I started to think how and with how we could “work” to make it happen. The 2 big difference to make it European was the budget of course and the whole organization of a project like this: looking for the right spots, place to sleep, I couldn’t’ get injured as we would be stay only for a couple of days in each city, find a place to keep the Cityhopper ramp at night. 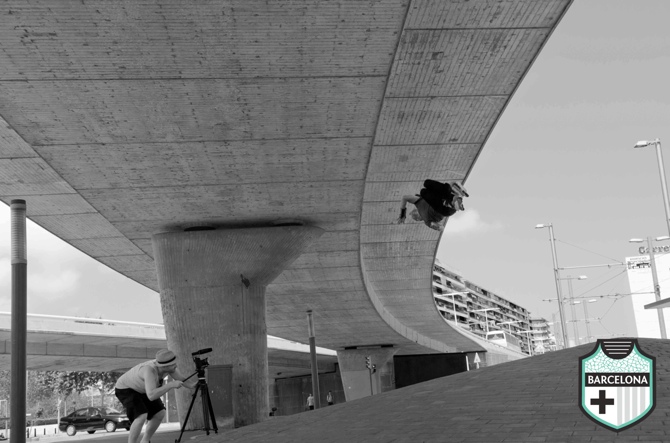 Who is part of the team? How many people did work on the project?
Axel v. Dijk and Remy Cadier joined me on all the trips as they were the filmers and editors.  Other people that drove with us from Holland to some of the stops were: Timmy v. Rixtel, Dominic Swagemakers, Randy Abels, Frank Voogd, Deveril Abels Dick Heerkens took care of the website, Niels Groenendijk and Jaap did the art work and animations in the video. In each city we also met with some of our friends for some extra help with searching for the spots, extra hand with carrying the Cityhopper ramp and of course their company. For Brussels we met with Jeremy Suarez, Paris with Warren Digne and Greg, London with Blake and Sam, Barcelona Nel Martin and Greg again, Berlin with Jojo, Sascha and Dominik.  Some other people that helped: Ralf van de Kerhof, Jeroen Wullems, Rafael Bergman.

What cities did you visit and how many weekends you spent traveling in total?
We visited: Brussels, Paris, London, Barcelona and Berlin. In total we travelled for 23 days of which we were shooting 13 days for Cityhopper Europe.

Can you please tell us one short story about every city? Something funny, scary or weird that happened?
Brussels: I already knew I was going to do a wallride at the atonium as I made freeskate edit there for Rollerlbade but at the day we visited Brussels there was a big event going on so we were not able to come even close to the wallride.  One month later we were visiting Paris so we decided the make a small stop in Brussels while we were on our way to Paris. After I couple of tries I made a really nasty slam almost on my face and this was not the best way to start our adventure in Paris. But after one good day of rest my body was ready for Paris.   Paris: As some of the tourist spots we got on our list had nothing to skate. So the last day we had no spot anymore planned so we started to drive random through Paris were we found maybe the most technical trick of the whole project. 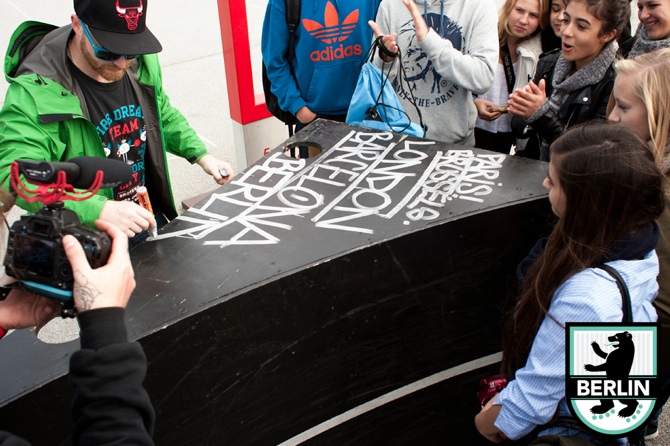 London: After getting from the ferry (Calais-Dover) everybody was feeling a bit tired so we decided to make a small stop to take some rest at the first parking we could find. This turned out to be a really nice location with a nice view at the Dover cliffs and our first Cityhopper London clip.   Barcelona: On our spotlist we also had Camp Nou (FC Barcelona) While we were getting close to the stadium we discovered there was no way to even get the Cityhopper ramp from the trailer as we parked the car at a security parking lot. But close to were we parked the car with trailer there was a small white handrail. We got out of the car and started to walk around after 10minutes we made a plan. The plan was: changing my tshirt for a FC Barcleona tshirt, getting all the wooden plates out of my van and put them on the roof, keep the trailer with Cityhopper ramp behind my van (exactly the way are also driving with it), putting my skates on and climb on the roof of my van and try to use my van as subbox and my Cityhopper ramp as a quarterpipe which would let me to the white rail.  I was not even standing on my van and I could already hear the security blowing really hard on his whistle. Remy was already filming and told me: “Oke you will have one attempt” So while I was jumping from my roof into the ramp, going to the rail and grinding the rail the whole time different security guys were shouting or blowing their whistles to stop me. It didn’t stop me but the clips turned out to be not so crazy and nice plus we didn’t had any footage from the security guys after I did the trick as we had to delete it. So you will only get to see this clip in the extend version of Cityhopper Europe which Remy is making.

Berlin: Not to do with Cityhopper. On our last day we only skated one spot and after we went to the Berlin Marathon at the Brandenburg Tor as Rollerblade was having their booth over there. We were watching the race from 1 km from the finish while suddenly Randy jumped over the fence and started to skate and join the marathon as he was one of the competitor soon Remy jumped over as well. Axel and me felt to tired and maybe to scared to do the same so decided to skate back to the Rollerblade booth and wait over there. 15 minutes later Randy en Remy came back with the biggest smile ever: they both had a medal of the Berlin Marathon and were looking so proud! Nice job guys…

Is there a spot your really wanted to skate, but it just didn’t work out because of securities or stuff like that?
Of course we would love to have some clips at some tourist spot that are now not in Cityhopper Europe as we not only wanted to look to the locations as a famous landmark but also search spots that would be nice in a skating way. Because otherwise you would get a lot of normal jump going in front of famous tourist spots. So we tried to find a balance in it. Famous landmark and cool skating spot.

Did you use the elastic rubber strap again to gain speed for extra big obstacles?
As in Holland it was easier to find somebody with a scooter to get speed for some spots we knew it was going to be harder abroad and we wanted to be independent as much as possible so the bungee cord worked really well for this tour. It gives you the right speed and it’s easy to bring with us to any spot. 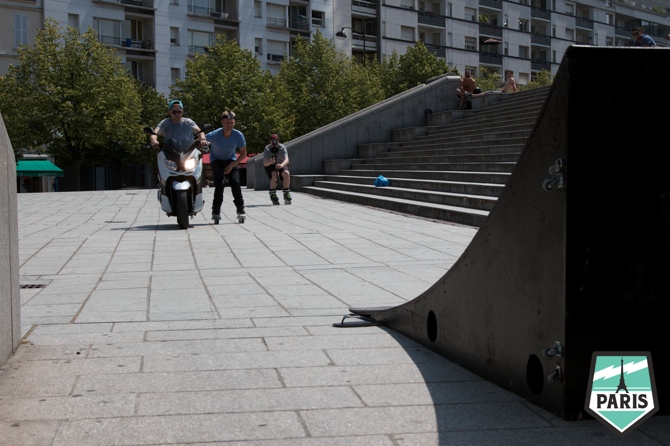 Are you working together with the mainstream media again? What are the plans to promote the project and get it to the masses?
No special plan. We will write a press release about it for the Dutch media, inform our own network which is already there and hopefully it will be picked up by all the social media, forums and blogs.

How did you finance the whole project? Are there any sponsors involved?
This was properly the trickiest part of it all. In the beginning we were looking for sponsors outside the Rollerblading world but this didn’t work about so if it wasn’t for Rollerblade we had to skip the whole project. Luckily after we finished the shooting days we found 4 local online skate shop to sponsor the different cities. Brussel – Grindhouse, Paris – Nomades, London – Loco Skates, Barcelona – Inerica, Berlin – Grindhouse.
From this “extra” money we were able to pay also some people who help us for free with the marketing, art work, website or other stuff.

The premiere of the City Hopper Europe documentary will be at Winterclash. What can we expect from it? How long is it going to be?
You can expect a nice documentary of 4/5 guys travelling through Europe with a jump ramp, bungee cord and a lot of camera material. We will the extend version at Winterclash and hopefully everybody will enjoy the nice footage we shot in a short month.

Whats planned for 2014? City Hopper Worldwide maybe?
Cityhopper World sounds right now as a to big project with even more budget and harder to organize but never say never. But let’s wait first and if people are liking “Cityhopper Europe”

Thanks for the Interview Sven. See you in Eindhoven. 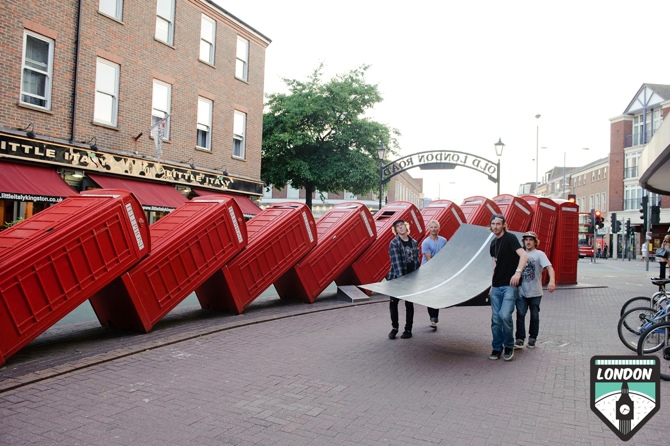 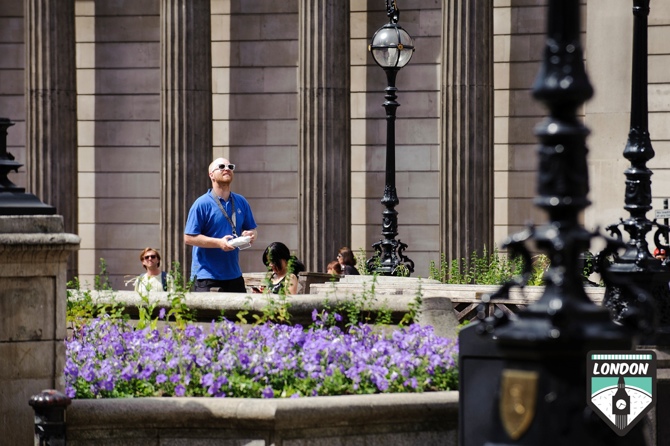 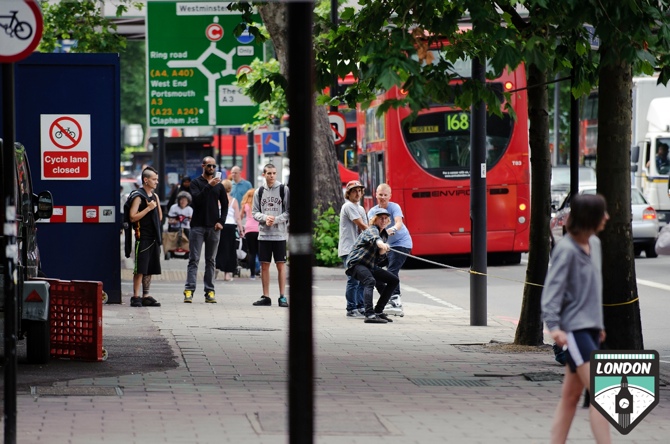 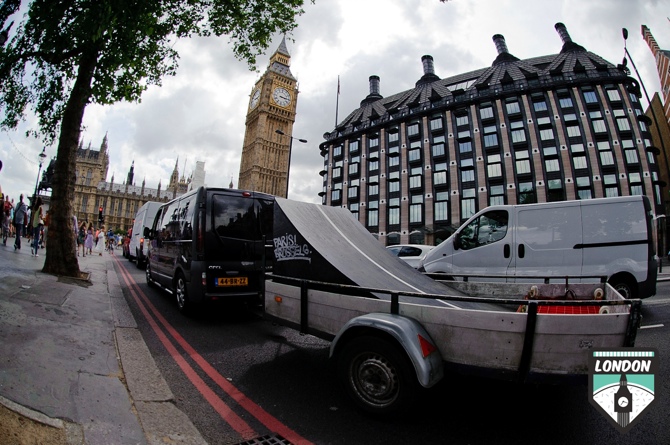 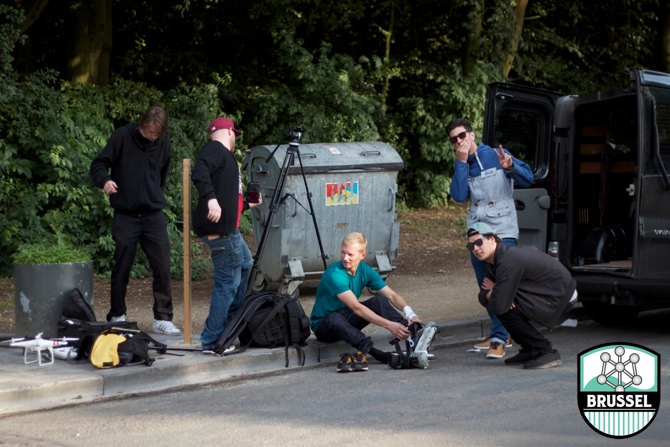 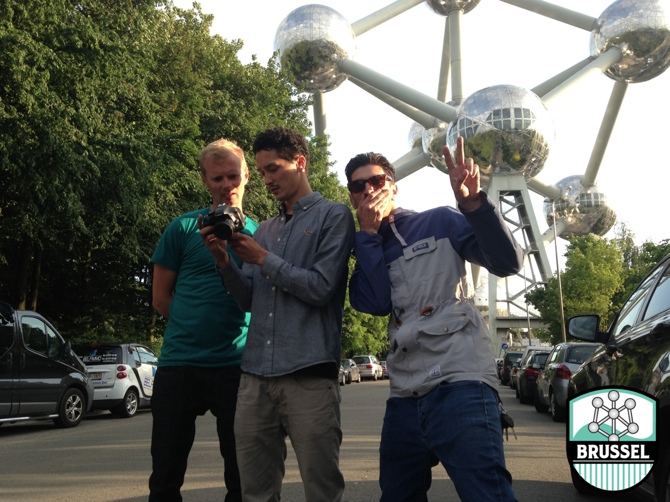 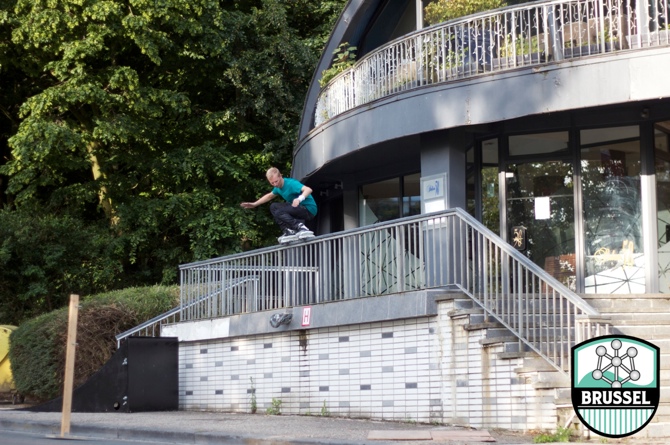 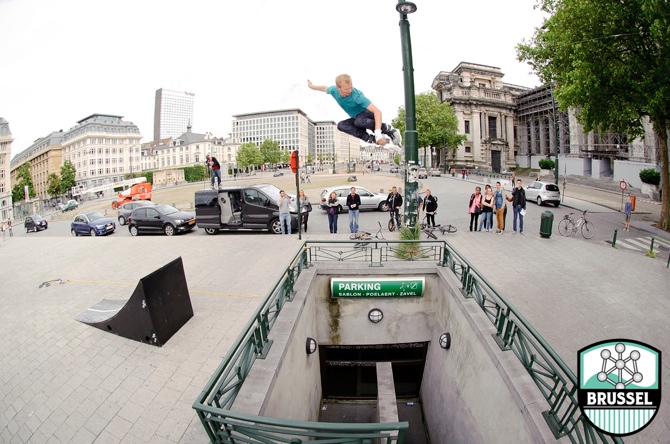 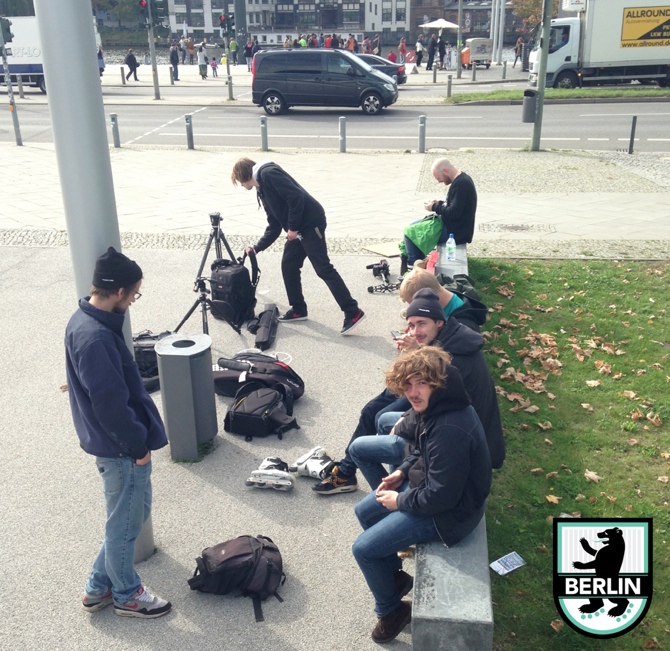 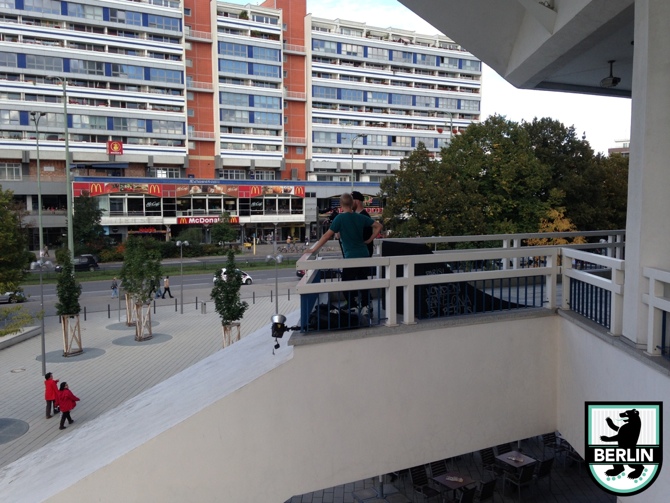 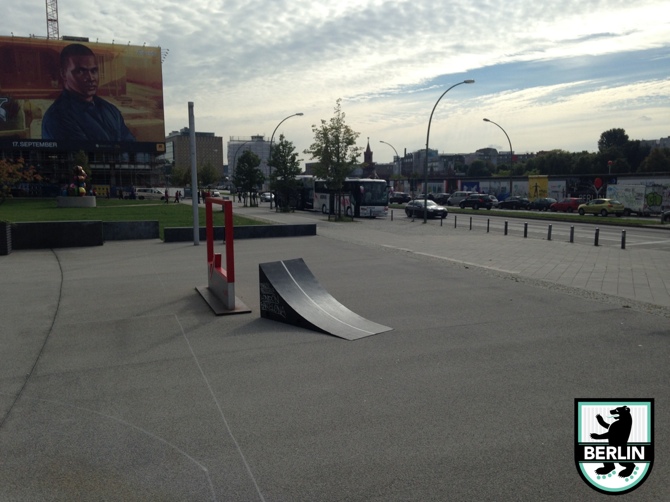 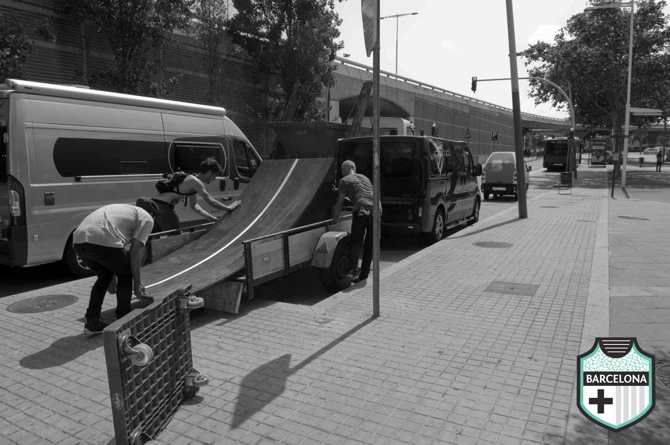 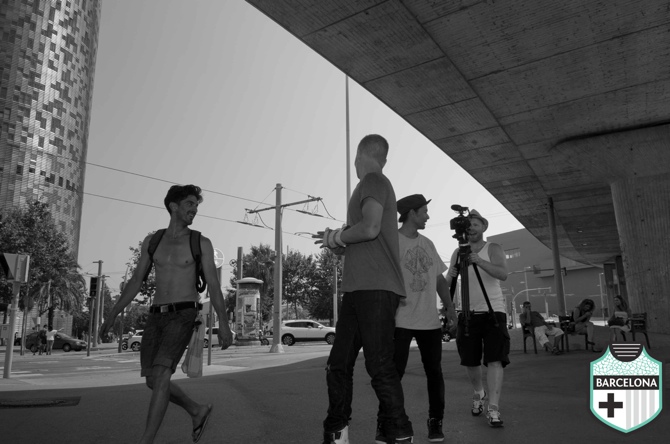 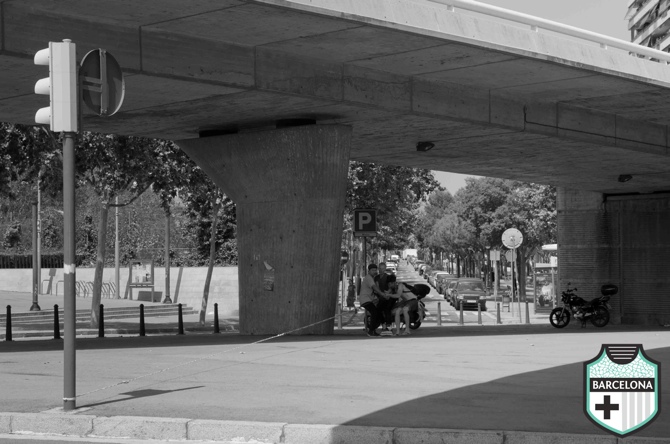