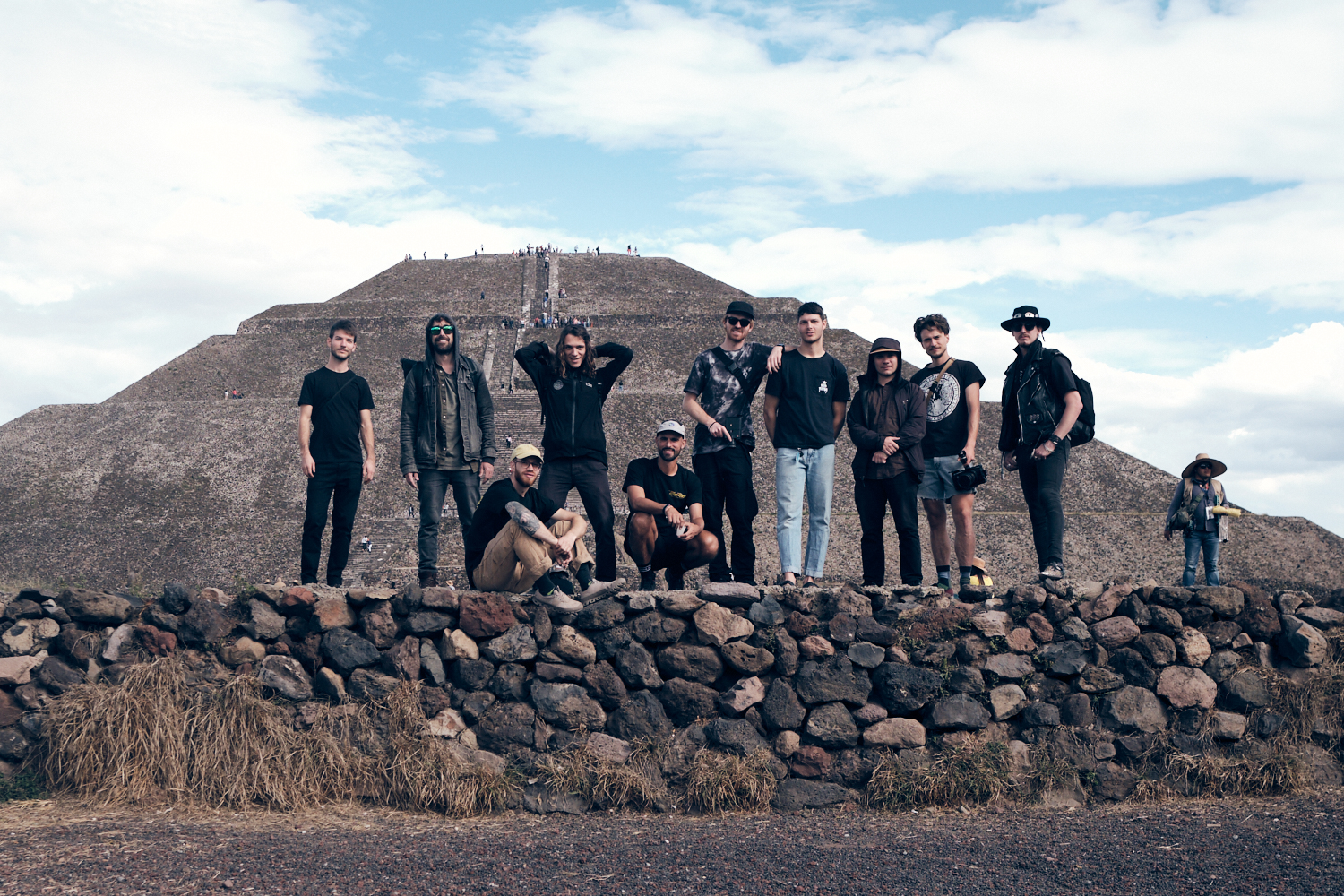 THE MAKING OF CUADRO: AN INTERVIEW WITH KARSTEN BOYSEN & BENJAMIN BÜTTNER

The boys of the Cayenne Project have miraculously returned from a two year hiatus with their newest VOD offering , Cuadro. Set in the vibrant country of Mexico, and featuring blading’s version of the Super-Friends, such as Richie Eisler, Chris Farmer, David Sizemore, Carson Starnes, Dominik Wagner, Scott Quinn, Chris Smith and Joe Atkinson.

Cuadro beautifully displays the powerful imagery that is so prevalent within the strong Mexican culture, from hand-crafted sculptures of eagle and snake clashes, to colorful tapestries of Mexican icon Frida Kahlo, to Aztek murals depicting epic battles with warriors adorned in bright featherwork armour. Cuadro does it’s due diligence in creating a visual masterpiece. The band of Cayenne brothers can be seen navigating through the crowded market streets, weaving around lively vendors and patrons, making full use of over-looked architecture, which now comes alive in the eyes of some of the best skaters in the world.

We had the opportunity to speak with the minds that created Cuadro, Karsten Boysen & Benjamin Büttner, and discuss with them the filming process behind one of the most anticipated blading films in years and they detail their experiences engaging with the lively personalities in the communities they filmed in. By the time you finish watching Cuadro, you will likely be wanting to book a flight to Mexico to indulge in some local cuisine, sip some pulque and soak in the amazing culture and ambiance. Check out what Karsten & Benjamin had to say.

The Cayenne crew always come up with unique locations to shoot for your videos, what prompted you to shoot in the Mexico City area this time around?

The main idea was to go somewhere that feels and looks completely different to the last trip we did, which was Taiwan. It was Carson that came up with the idea to go to Mexico since he had been there already in 2016, shortly before the Delfon Dio trip to Greece. Which is also why he had the wrestling mask back then already. Well, three years later we all had wrestling masks on. And now regular masks.

In Cuadro there is a scene of a huge demo that the guys participated in which had an incredible turnout. You could really feel the energy coming from the huge crowd of spectators that were present. Can you give us a little background in how that all came together?

So before we went on the trip, we reached out to different locals to see who would be down and have time to show us around. Which they all did basically. One of them was Diego (Lara), who happens to have a big skateshop in Mexico called Beyond Pro Shop. So he arranged a session in a skatepark in Mexico City one night and once we arrived, we were blown away by the amount of people that showed up. It was a true demo situation with autographs, taking photos with people and having a great session after all. It was such a good vibe, the people there were really hyped about our visit.

There are a few shots in the video where the skaters are seen skating in the middle of open businesses, there is one specific part where David (Sizemore) is seen grinding down what looks like a garbage chute in an open business. It seems the owners were pretty open to you guys skating in there. How did you guys get permission to skate some of these open spots?

Yea that was a crazy situation. We had super helpful guides (shoutout Jonathan, David, Carlos, Pak, Arturo and everyone else) that would go talk to the shop owners or market people and make it possible for us to skate these otherwise highly unlikely to skate spots. Unfortunately Carson was the only guy in the crew that spoke decent Spanish, so we were definitely relying heavily on the locals.

All these market scenes were shot in Guadalajara, where people were really stoked about us skating there as you can see in the video. Also that big drop ledge that Chris Smith skated, it was such a surreal situation. A clown blocking people for us, the guy with the machete in his trunk, the market owners all helping out in order to create space for Chris to skate the ledge. Definitely a stressful situation for Chris, but it was those moments that made the trip and in the end also the video feel special I think.

It seemed like the overall atmosphere was extremely positive, in comparison to other Cayenne projects like Formosa where you seemed to run into more adversity from the police. Did you receive much hassle in the filming process from the police or property owners? It was portrayed to be pretty easy going.

Well, most of the spots in Mexico City had armed security and the police was driving around more than I have ever seen anywhere. So a lot of good spots we didn’t even dare to try.  In Guadalajara it was a bit different, the market spots for example had no security or police anywhere and people were hyped about us skating there for the most part. We did get kicked out most of the days in every city though. Just did not document or show it too much this time.

Well thank you! It is super important, but I think it happens quite naturally. We are out in the streets all day interacting with locals, skating their spots, eating their food and so on.  We definitely all try to stay curious, which is a huge part of travelling.

On the topic of immersing in the local culture, can you explain the bug eating scene that the boys took place in and what was the actual bug that was on the menu?

Those were crickets! Which were sold from street vendors. Carson got a bag of them and made everyone try them. Not 100% sure if he succeeded with everyone 🙂 Carson is definitely the most curious guy out of the crew when it comes to trying out food.

How did the original soundtrack come together?

Last year I met Yves while working on a snowboard video. He made five or six songs for that video and the collaboration process worked great, so I asked him if he would also be down to create music for our mexican video. Especially since he had never done a complete soundtrack yet, he was super motivated to give it a try. And we are all really happy how it all worked out in the end.  We really felt like it was a much needed step for the project to have the rights for everything.

It is incredibly hard to avoid injury while filming a video such as the Cayenne projects. But it looked like the boys seemed to come out better this time than in years past. Were there any major injuries sustained during the filming process?

Luckily we did not need to go to the hospital at all. There were definitely some ugly slams but nothing major.

How difficult was it traveling with that many skaters? It seems like with all of the camera gear and skates it would make it quiet exhausting.

Of course everyone has to be a bit patient sometimes when travelling in a big crew. It’s not so easy making collective decisions on where to go and what to do all the time, but I think we are all quite experienced team players by now and we all get along pretty well.  For sure carrying around the camera gear is exhausting, but we are many people, so we can at least share some of that weight.

There was a particularly powerful shot of David (Sizemore) skating with a huge squad of police in the background that looked like they were prepared for a full scale riot, what was the backstory behind that shot?

That night in Mexico City there was a big women’s rights demonstration going on, which we had no idea about. David found this rail in an alley, which was two blocks away from the demonstration. So there were the backup crowds of police waiting, but they didn’t bother about us skating there. I guess they were even cool with it, yet David did not get the OK to start a line in the police bus sadly.

Josh Glowicki was sadly missing from this year’s Cayenne festivities, did he have other Blading Camp responsibilities that kept him from participating? Will he be filming for the next Cayenne project?

That was very unfortunate. He did unfortunately have other responsibilities with teaching back in Spain, where he is living now. It was hard for him to make the decision to skip this time, but he promised us he will be back next time!

What is next up for the Cayenne crew? Can you give us any insight into where your next location will be or when you will start working on it?  Has the pandemic put a delay on your plans for a follow-up to CUADRO?

There are definitely ideas floating around, but right now it is especially hard to plan stuff.  No one knows what next year is going to look like and if there are still travel limitations and all that.

Can you give us some insight into who some of the local skaters there helped you in navigating through the city? Were there any local skaters from Mexico City that you felt deserved recognition?

For sure, without the locals it would not have been possible. Shoutout to the guys in Mexico for showing us around, translating, negotiating, guiding and showing us a good time. Arturo, Ernesto (who both have tricks in the video), the badass Guadalajara Crew, especially David Zhama and his family for hosting us for almost a week, Jonathan (check out Collectivo Deslice), Frai Gomez, the AGGS crew, Jeremi, Carlos, Pablo, Angel, Pao. Alejandra, Danjel in Morelia and I probably forget a lot of people here, but man there was a lot of support in Mexico.

BE SURE TO VISIT THE CAYENNE PROJECT SITE TO PURCHASE THE NEW VIDEO & BOOK THECAYENNEPROJECT.COM