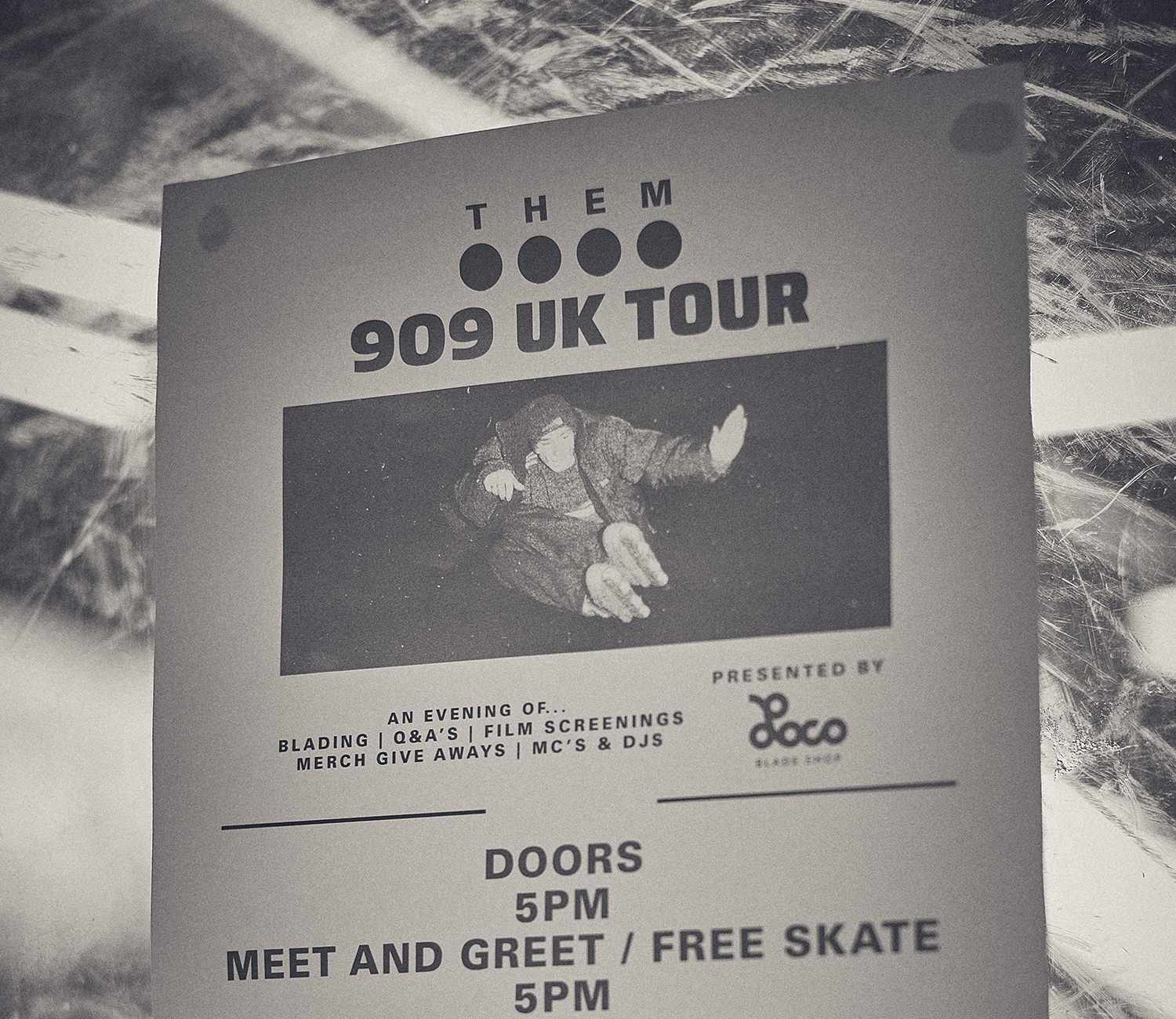 Many Bladers awoke on that Sunday to the rain and wind of Storm Ciara battering the UK. That didn’t seem to dampen anyone’s spirits. Bladers from all around the UK made the pilgrimage to see the legendary THEM Skates Team in London at the famous Bay 66 Skate Park.

Bladers started queuing outside, anxiously hoping to be one of the first 50 to receive a free THEM tote goodie bag. A buzz of excitement and general banter filled the air.

From outside, it became apparent that the storm was having an effect on certain parts of the park, with the MV Blake Bird, a team of volunteers and London OG’s cheerfully mopping and sweeping the skate park to ensure it wasn’t slippery and the session could go down. Major props to everyone that helped given the situation.

As the doors opened, everyone made their way into the annex room where they found the THEM crew and a table full of goodies.

THEM goods available to try on in every size and iteration —  limited edition skates, clothing ranging from t-shirts, long sleeves, hoodies, the Ellos DVD, and even the new THEM branded coffee (this is a first in the blading community.)

A little session broke out on the large coping box with other bladers choosing to session the miniramp or bowl in the back. As the time drew closer to the starting and Storm Ciara raged on, a tactical decision was made by Blake to shut the park for an hour so they could again mop sweep and prepare the park for the Best Trick Contest and Pro Demo. An hour later we found a completely ridable park!

As time drew on and the meet and greets slowed, the THEM crew premiered the Video for their new Pro Rider: none other than David Sizemore.

The introduction Edit was impressive, with the edit shot on 16mm film by Ivan Narez. It featured numerous crazy stunts—you need to see it to believe it.

As the Premiere drew to a close, we then moved on to a Q&A, answering questions from the audience. The panel was lead by Jake Eley of Loco Skates.

A lot of questions were fired at the crew, answered with fun & insightful responses. What became obvious here was that this was more than just a team of Skaters; this was a crew of established friends just out having fun and supporting Jon Julio’s dream. It shows in the Energy between them all.

One question on all our minds was if we would be getting a Skinned 909 Skate. Jon paused, smiled, and answered with a resounding YES.

After the premiere, our attention turned back to the park where the best trick contest went down, utilising the 2 A rails towards the rear of the main section of the park.

Niko Saloman a local shredder stepped up to the plate, lacing numerous difficult tricks with control and fluidity as usual. Darrel Parnell brought his signature Negative Tricks with him, lacing them on the A Rails as well as on the Box. Leon Humphries also graced everyone with his signature style, lacing AO Topsouls & fishbrains with his undeniable steeze. The best trick was won by Ollie Brewster who laced a flawless True Top Acid on the A frame rail.

The event finished with many of the London locals retiring to a nearby English pub for drinks afterwards, recounting what was an epic event.

UPDATE — Nik just forwarded us a video he shot of the BaySixty6 tour, so we’re adding it the original story posted 4/21/20.