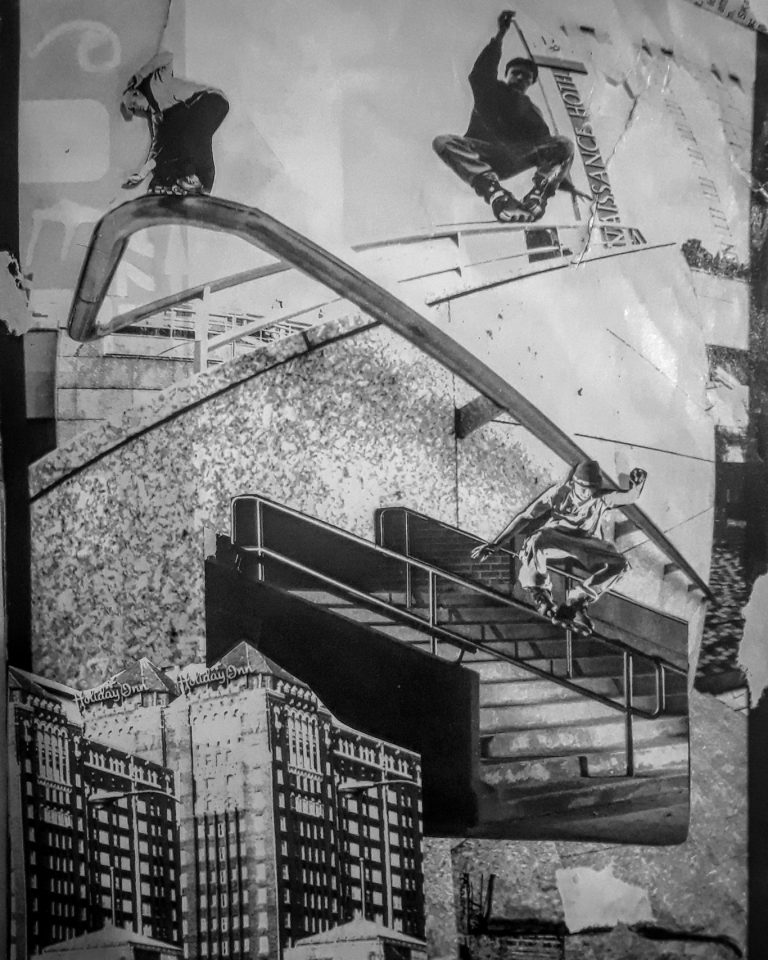 THIS INSTAGRAM PROVIDES THE DAILY BLADE NOSTALGIA YOU NEED

Blade Nostalgia is something we all cherish, so when the Instagram account ONEBOXOFDAILYBREADREJECTS appeared on my explore feed the other week, I was fascinated by the amazing collage work of old blade photographs that it featured. With mixed media being a rather uncommon artform found in the sport, I was inclined to reach out to the person behind it, Dustin Black, and get a grasp of their craft.

Can you tell me a bit about your creative background?

I bought a VHS rig and a pair of Rollerblade Dirks with my first paycheck from Wendy’s in November of 1998, and I’ve had a video camera in my hand in some capacity ever since.

When did this idea of doing collage come to fruition?

The original idea was to make a coffee table book, but I’ve been doing these collages randomly since the early 2000s, as evident by the yellowing of some of it’s pages.

Do you think you’d show these in a public realm like a gallery or anything? I know the platform that is rather difficult, but it would be rad to see these at like, a pop up at the Blading Cup or something.
The idea of a coffee table book also sounds intriguing. Think that’ll ever come to light?

I’ve never considered that, but I’m open to the concept. The book will happen when time allows, even if I only end up making a copy for myself.

It makes sense to share this work on Instagram, as it is the number one platform for socialization these days, but I am curious what prompted you to share it now rather than before? I mean, have you shared these else where or is this the first time that this project has been shown the public?

Not really, I used to hang similar pieces on the walls of my high school that I would make with the office copy machine, but I just figured it was time. Hopefully other aging Rollerbladers will enjoy the nostalgia aspect.

What is your process in creating these pieces? Do you have specific criteria for a photograph to work along in the collages you make?

Some of them are trick specific, or feature one Rollerblader, but I just freestyle most of them honestly.

So how do you make these? Are you doing the regular method of cut and paste? How do you determine the size for each piece? How many have you made thus far?

Every piece is 8.5×11, made using only scissors and scotch tape, and limited to clippings that were originally b&w. I’ve made about fifty so far, but still have a decent sized pile of stock to go through.

What influenced you in creating these? Do you look at other collage work?

There’s more than enough inspiration within the pages themselves, but aesthetically I consider myself an analog person living in a digital world.


What do you think makes a good photograph?

Composition is everything. Tell me a story.

Who are some of your favorite blade photographers?

I really like Kevin Dowling‘s work, and I think it’s amazing that Brian Smith went from doing frontsides to shooting celebrity portraits.

What was your favorite publication?