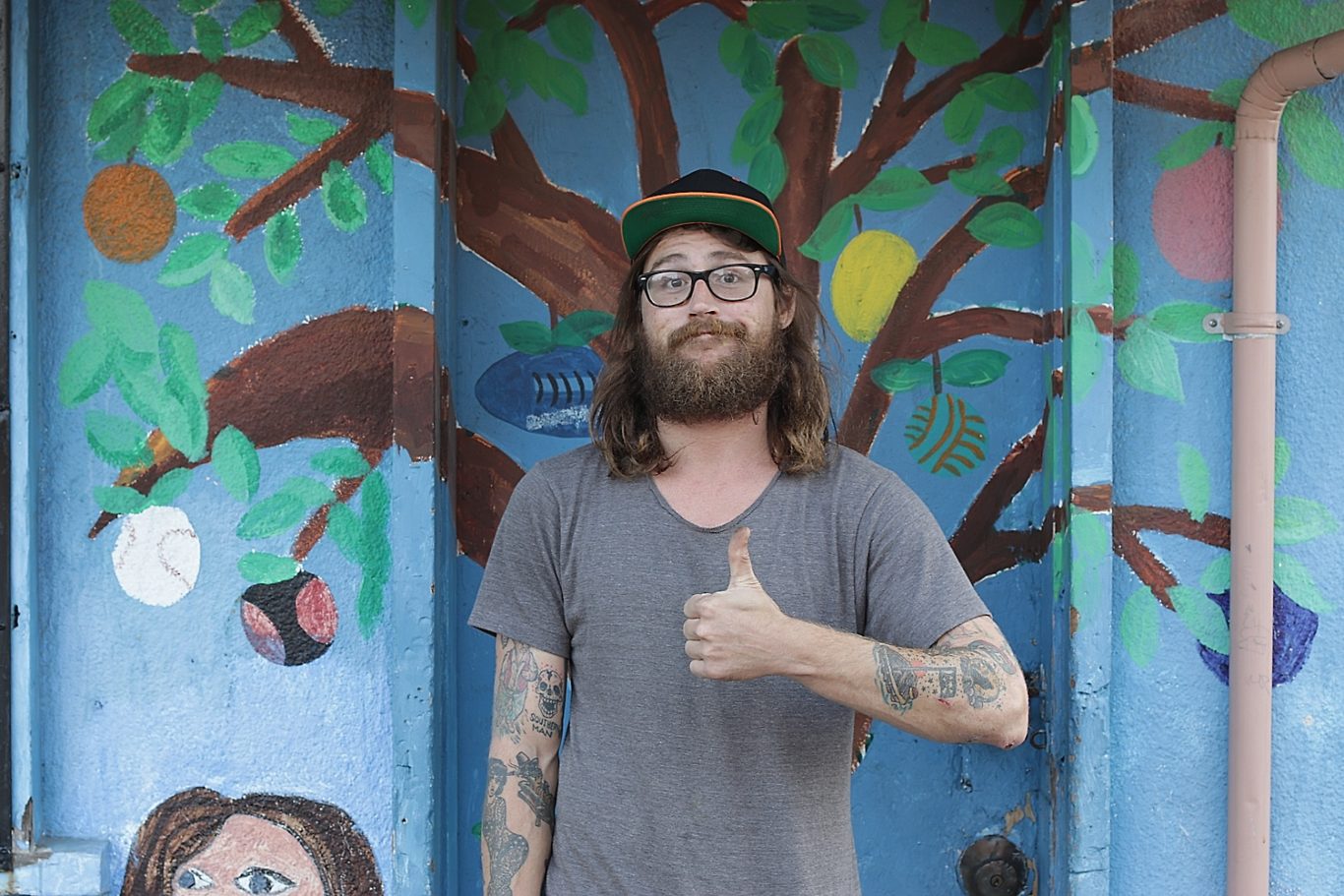 There’s something timeless in the way Matty Schrock carries himself. A man from the South, always a smoke in his hand, a long-haired and smiling representation of a contemporary Marlboro cowboy. An old fashioned American folk, no afraid to speak his mind and work hard to get what he wants.
It shows in his skating, too. Despite being from a more recent generation of bladers, there’s something undeniably old school about the way Matty shreds. It might be the number of hard bails and broken bones. It might be the classic tricks, executed with sheer determination on some of the most dangerous, yet creative obstacles too.
Matty Schrock is far from being stuck in the past though. After last year’s Americana tour with the Shredweiser family, the SSM team rider also got picked up by Ground Control to be part of the newly refurbished company, and released a strong introduction edit soon after. He’s been blading hard for a long time, and judging by these pictures he doesn’t plan on stopping anytime soon. High time for a Top 5, we say! 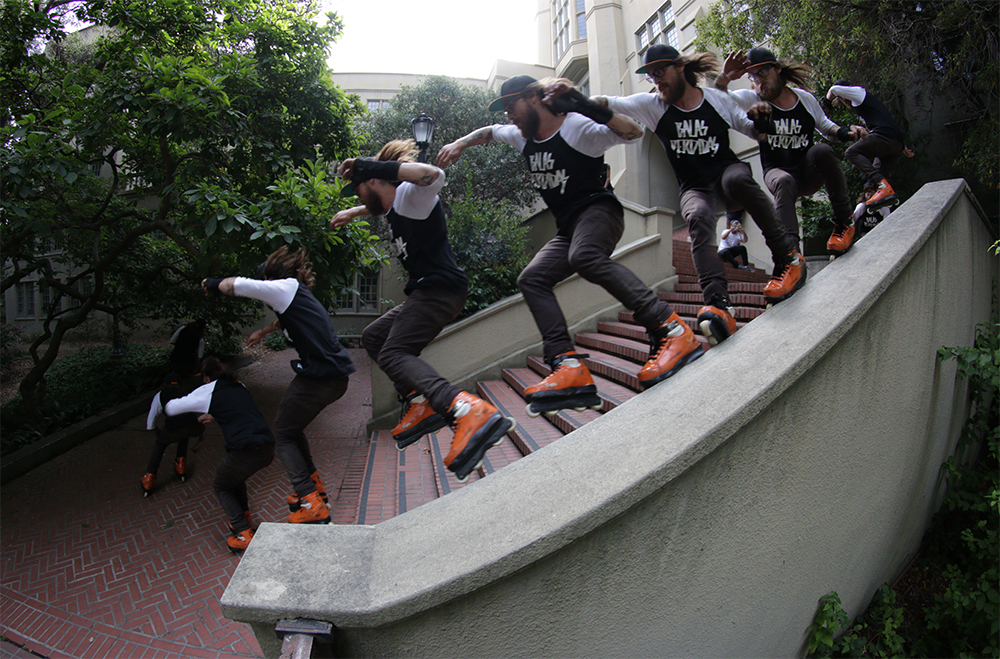 Top 5 worst things that happened to you while filming for a video part
– Too many injuries.
– Breaking skate parts.
– Always broke ha ha!
– Not being able to skate certain spots.
– Being unable to skate during filming.

Top 5 ways to annoy you
– Not being told the truth.
– Wasting time.
– Lazy people.
– Having an empty pack of smokes ha ha!
– Out of green.

Top 5 worst things about Oakland
– It’s the ghetto.
– Chances of getting robbed are high.
– Drug dealers live on my street in front of my house.
– Crack heads are everywhere asking for shit.
– Bums live on almost every corner.

Top 5 things about Oakland
– It’s like the wild west, anything goes.
– No worries about smoking anywhere.
– It’s one of the cheapest places in the Bay Area.
– The skate spots are endless.
– There is a strong rollerblading scene here.

Top 5 Charles Dunkle moments
-Being fortunate to have been able to become good friends, and being taught not to be a bitch.
– Getting in to Atlanta with Mike Buckalew to a A Town Stomp afterparty to find out that Charles downed a half bottle of Diesel fuel liquid that one of the Carson brothers gave him, and he was telling everybody to punch him in the face and everybody was scared shit less. So we had to get him out of the afterparty.
– Driving him to the hospital twice after two different bar fights.
– Watching him scare the shit out of everybody in his house during the Birmingham Magic City Showdown contest when he brought out his shotgun and told everybody that they were about to get shot up.
– One weekend Charles was staying at my older brother and wife’s apartment, and one of my good friends was living with them. I got a call from my friend telling me to come over now. He was saying that Charles was chasing him around the patio table outside in the yard yelling at him to punch him. My friend never met Charles and was freaking out. 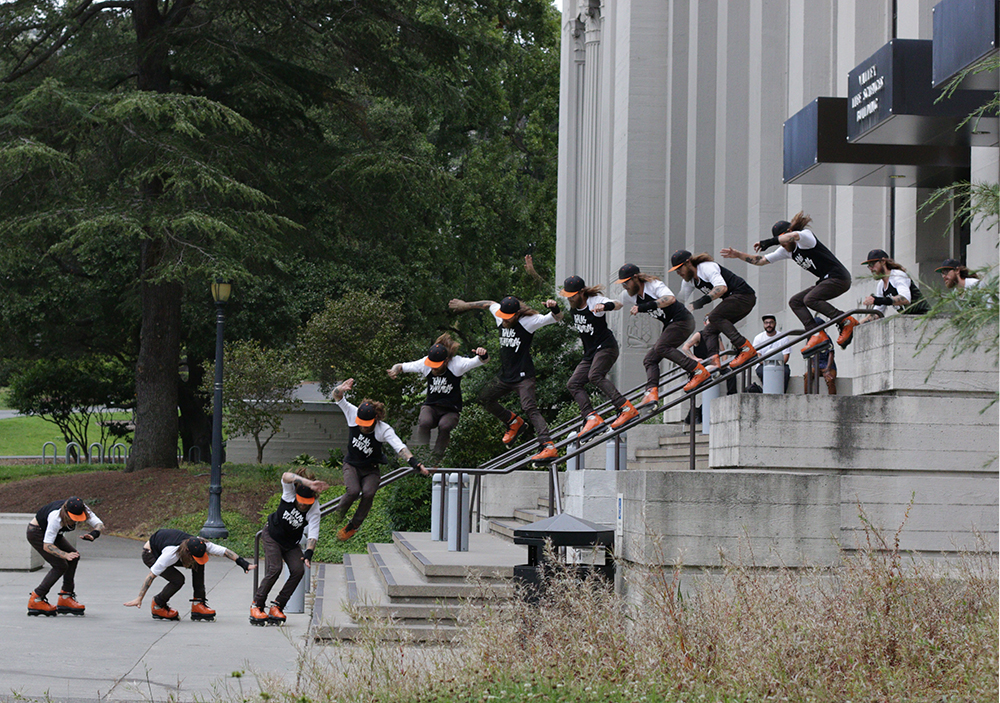 Top 5 reasons to skate for GC
– One of the oldest running companies.
– Always have had great frames.
– Best flat frame on the market (Formula Ones).
– Some of the best rollerbladers in the game started the company.
– Quality.

Top 5 blading photos on your wall as a kid
– Aaron Feinberg doing a top soul during an old X Games.
– Jon Julio, top mistrial over the fence.
– Matty Mantz, backside on drop rail I think from a K2 ad.
– Bryan Jaggers, top mistrial on a brick bank.
– Chris Haffey Remz poster that came with the non UFS Remz.

Top 5 reasons to skate flat
– It’s how I started.
– It’s the way all rollerblades used to come.
– Rolling fakie.
– The feeling of the concrete under your feet.
– You can roll over almost any surface.

Top 5 tours you’ve been on
– A tour Michael Braud had through the South, forgot what it was called.
– Shredweiser Americana Tour.
– All trips in the Green goblin, Charles’ old van.
– Long trips I took to Arizona to film with Revolution skate shop and Jon Jenkins.
– I haven’t been on too many tours.

Top 5 best jobs
– Working lawn service for Charles Dunkles family lawn business.
– Working on the beach renting beach chairs, kayaks, boogie boards, and some other stuff.
– My current job at Bernal Heights Corporation.
– Any job getting paid under the table (tax free).
– Selling golf balls as a kid being my own boss.