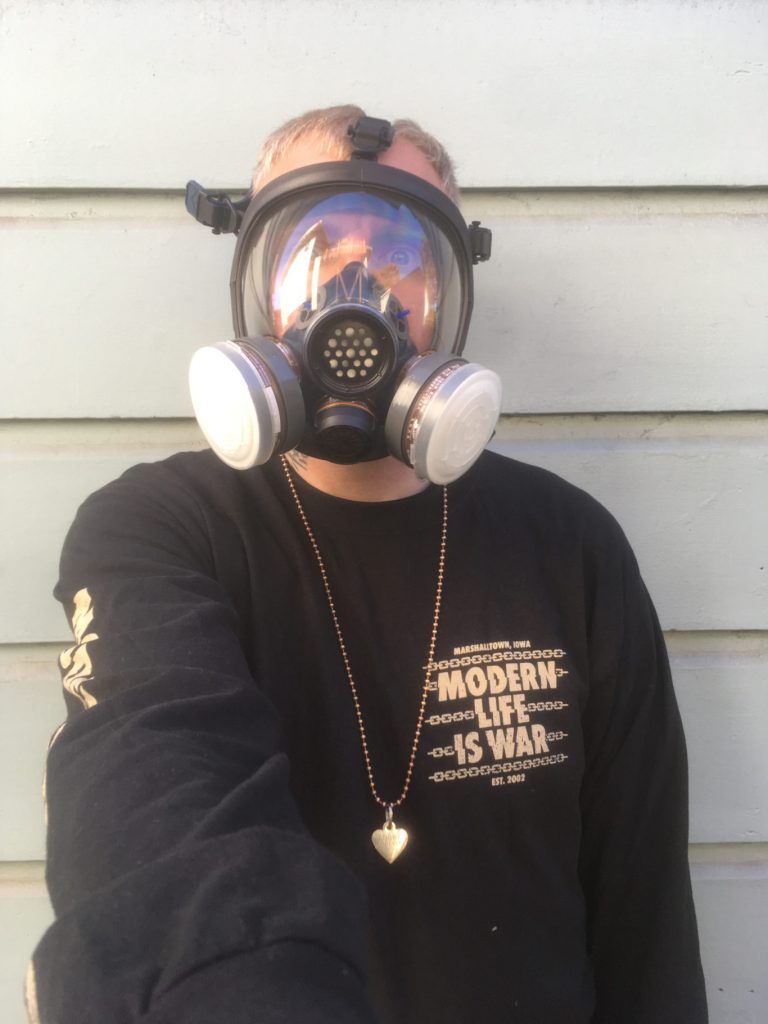 TOUR LIFE | CAVIN IN THE USA

CAVIN BRINKMAN DETAILS HIS LATEST TRIP TO THE STATES 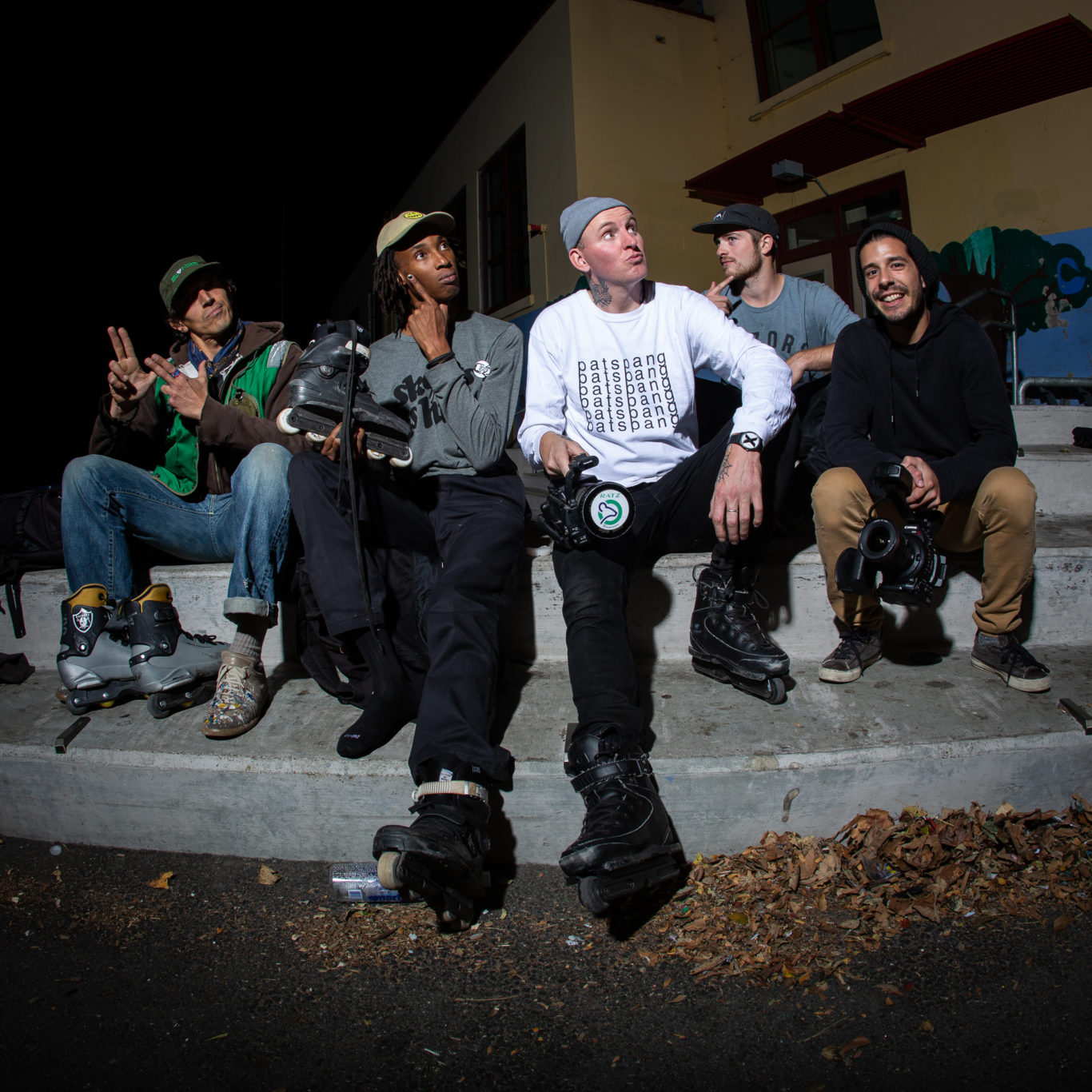 This must have been the weirdest yet also the most fun US trip I’ve had so far.
I booked a ticket to fly to the 2018 Blading Cup and was to stay three weeks with Russell Day to film for
ADAPT, but with Russ busting his ankle at the ONE LUX comp in the Bay Area only few weeks before, I
needed to change my plans last minute.

I thought of Cameron Talbott straight away; we had a good connection on and
off the blades for some years now and SF is easy to get around without having a car.
I texted him and he was down. From there, we would see what we could make of my time with him, since he
had work normally during the days.

A few weeks pass and it’s time for my trip.
I flew out from Paris, where I had dropped my dogs off for the weeks while I was away. 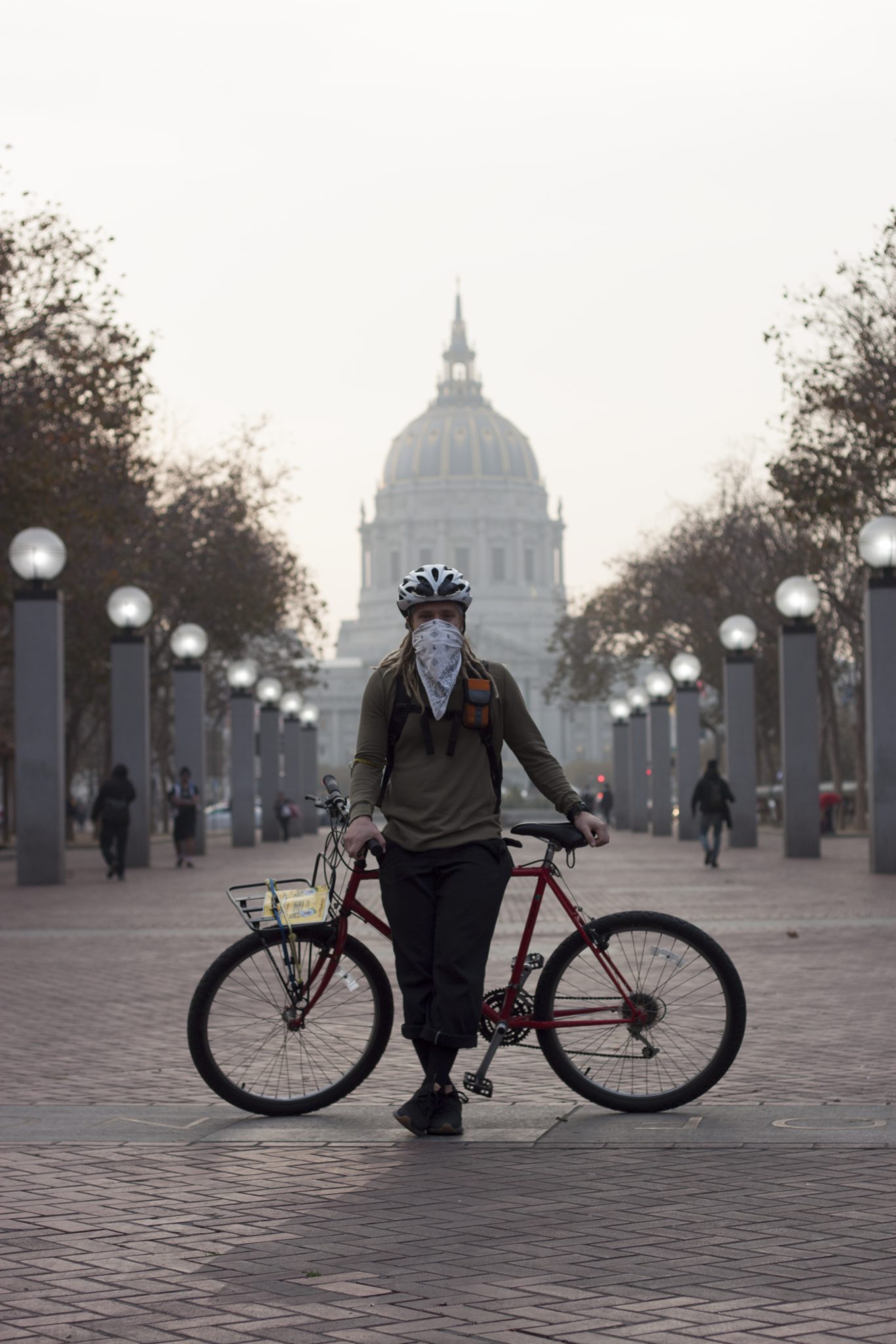 My trip ran then its course;

I took the train to the airport.

One stop before the airport, the train broke down. We all had to get out in the pouring rain and change platform where a different train arrived
15 minutes later; I planned ahead in the event of stuff like this, thus taking an early train meant I had nothing to worry about.

Checking in my bags went kinda slow because a Russian gymnastic team of 15 girls checked in before me and the language barrier made it take forever.
Normally I would have an hour to an hour and a half before my flight, but due to the mishaps, that became 30 minutes, which worked in my favor.
I had a lay over in Frankfurt for an hour and a half. As we land, I look at my phone to check the time…

Wait.
My boarding starts at 10:45 and it’s 10:45 now?
I’ll keep it short; running with a camera bag and fucked up knees suck, but I made it. Barely.
Now on my to the States, it was time to sleep a few hours and get some food…
Oh wait, my special requested meal is not here even though I got two confirmations for it?
Sure all good… just give some fruit and I will be fine.

I landed in LA after about two movies and a few hours sleep and found myself waiting at the luggage belt.
I realized that if I almost missed the flight, my bag definitely missed it.

I find a worker and ask for information, and after verifying my flight information, he pulls out a piece of paper; I see my name straight
away. “Whatever, just tell me where to go to get this solved.”, I tell him. I’m tired and I want to get going.
I finally get out of the terminal gate and see my non skate friend.

“Fuck this all, lets get food,” I say as I shrug off the unpleasant excursion behind me. 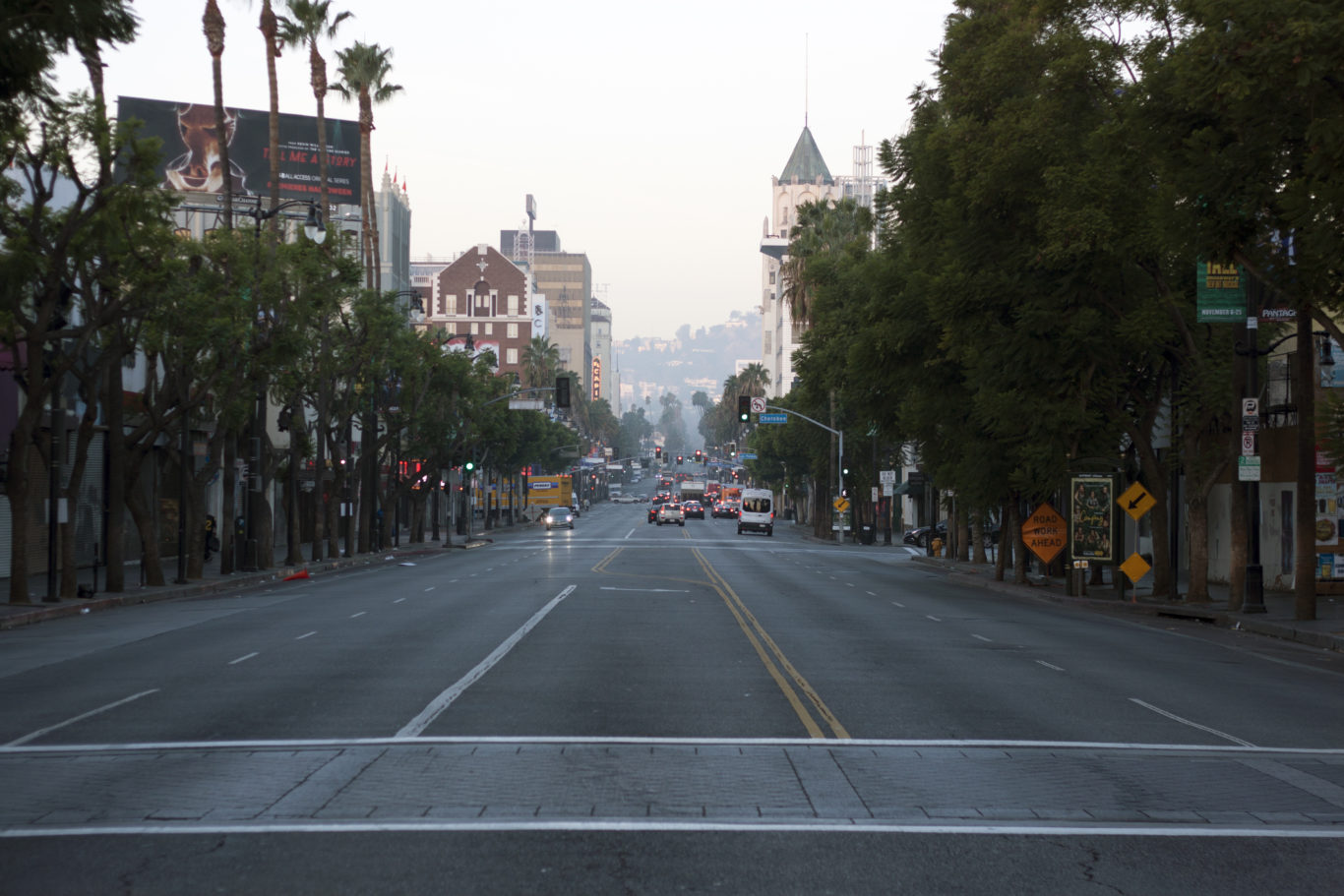 The first few days I spent roaming Hollywood, and in turn spent Halloween on Hollywood
Boulevard… 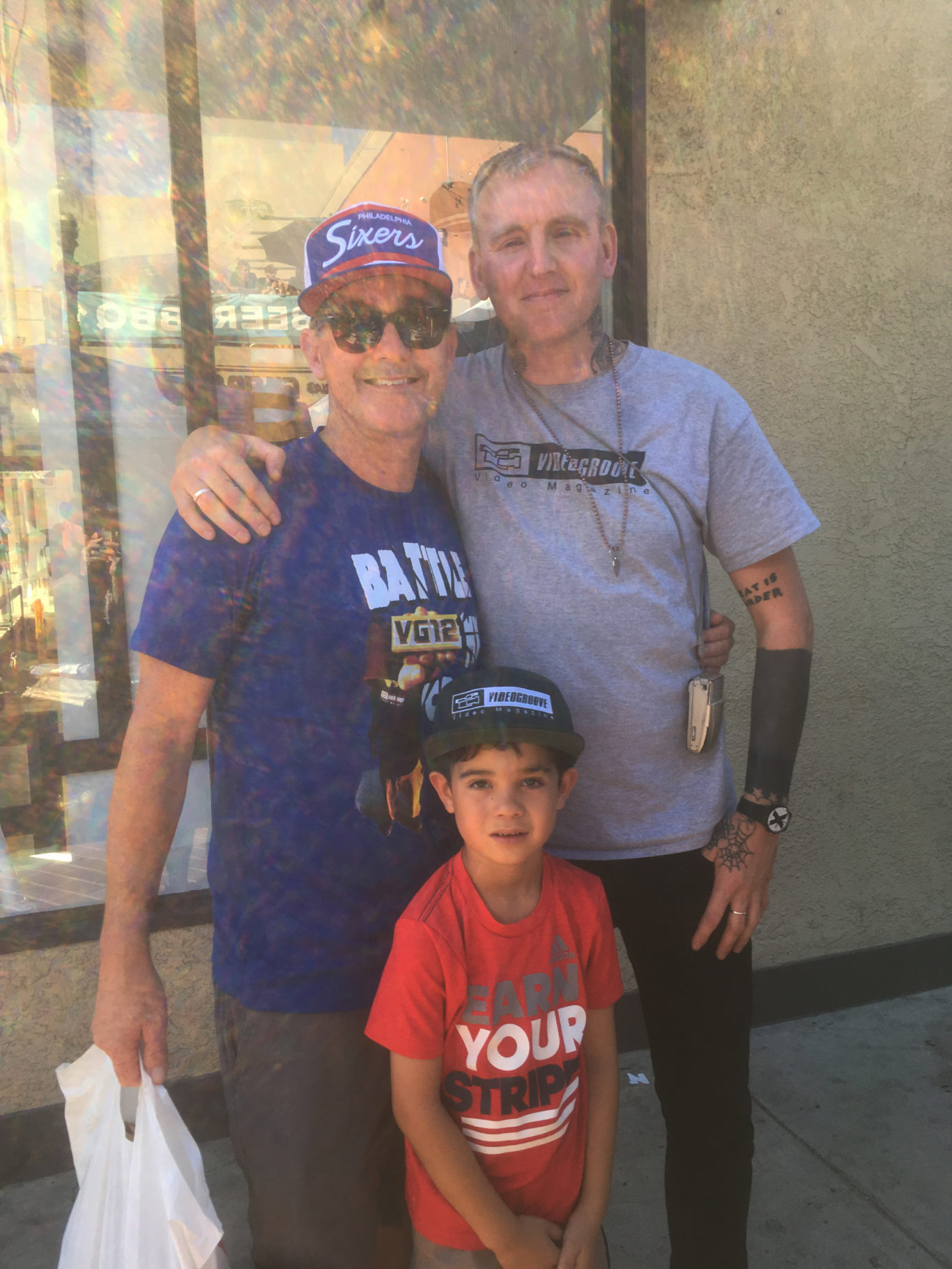 Among the highlights of Brinkman’s travels was meeting the iconic Dave Paine.

The weekend of Blading Cup was unreal; so many friends that I did not know would be there,
friends I had not seen in years, meeting new friends I only knew trough social media, and of course, meeting
my hero and the reason I am still doing this and will do it forever, David Paine of Video Groove.

I needed to geek out a bit and get a picture with him.
We talked a bit about how filming made me inspired me to do all this cool stuff, and how his music in the
movies was and still is so in my alley, from A Tribe Called Quest, to Ignite, to Voodoo Glow Skulls.

He explained how that music had always been his style.

“My brother and I listened to all kinds of styles ( of music ).” He said, then paused.
“Okay stop it now, you are giving me goosebumps.””

Probably my only geek out moment ever, but such a good moment. 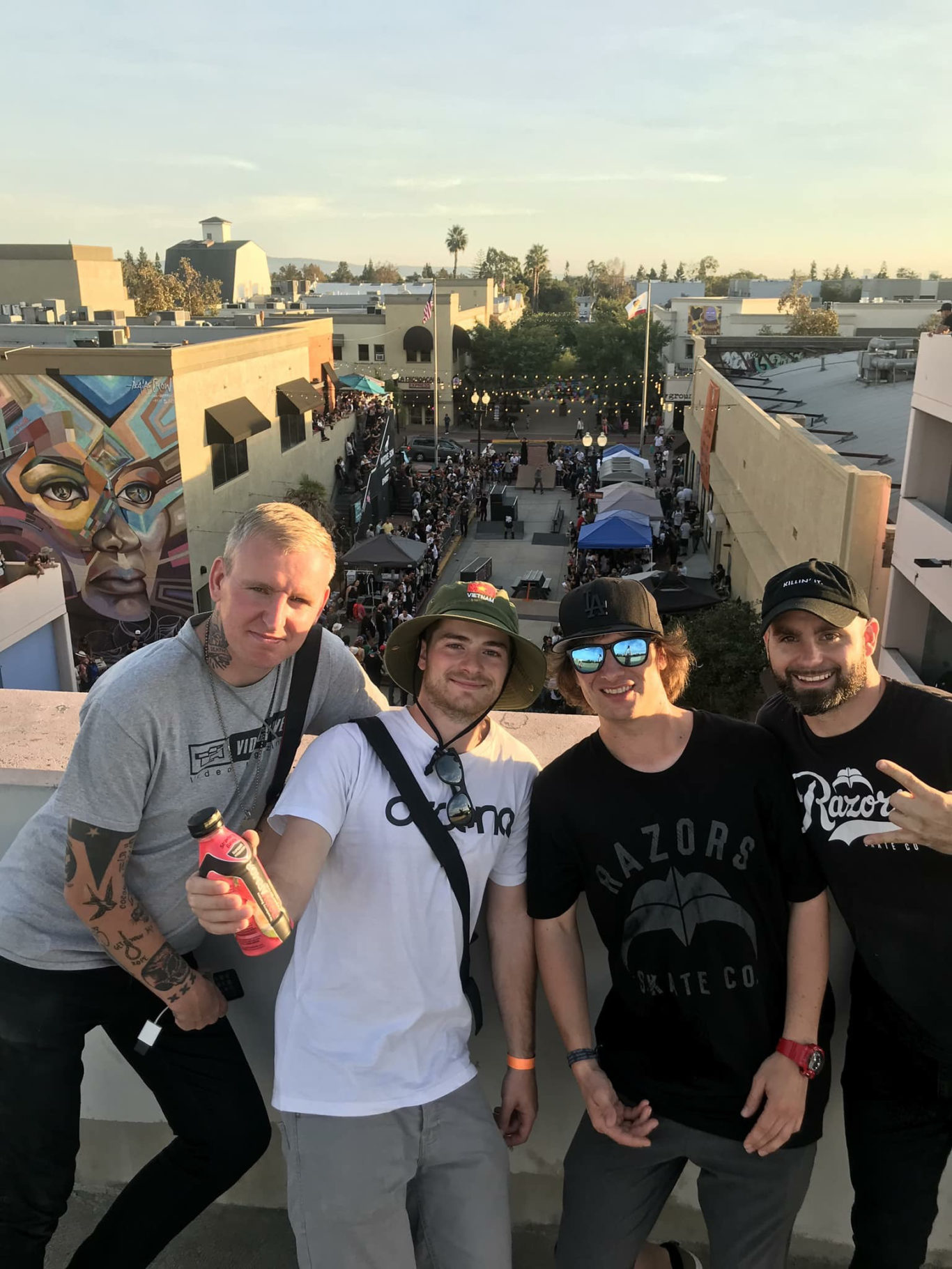 I stayed with Cameron Talbott and Sean Keane at a nearby hotel.
After the Blading Cup after party, we went to a food truck to get some food.

Cameron walked to the car before us and all of sudden came back asking if Sean had moved the car.
Keane did not use the car at all, and we then realized the car was gone. I slowly began to freak out, knowing that all my stuff was in there.

We took an Uber to the hotel, only to find out Santa Ana has a strong parking policy, with the driver reassuring us that
the car was towed. A few calls later, the Uber drivers premonition held true; they picked up the car and my bags were safe.

On Sunday, I drove with Brian Krans, Danny Malm and Chris Bjerre early to the skate park where the Negrete memorial was being held.
We skated a bit before it got busy, and ending up leavbing early, as a 7 hour journey to the Bay awaited us. 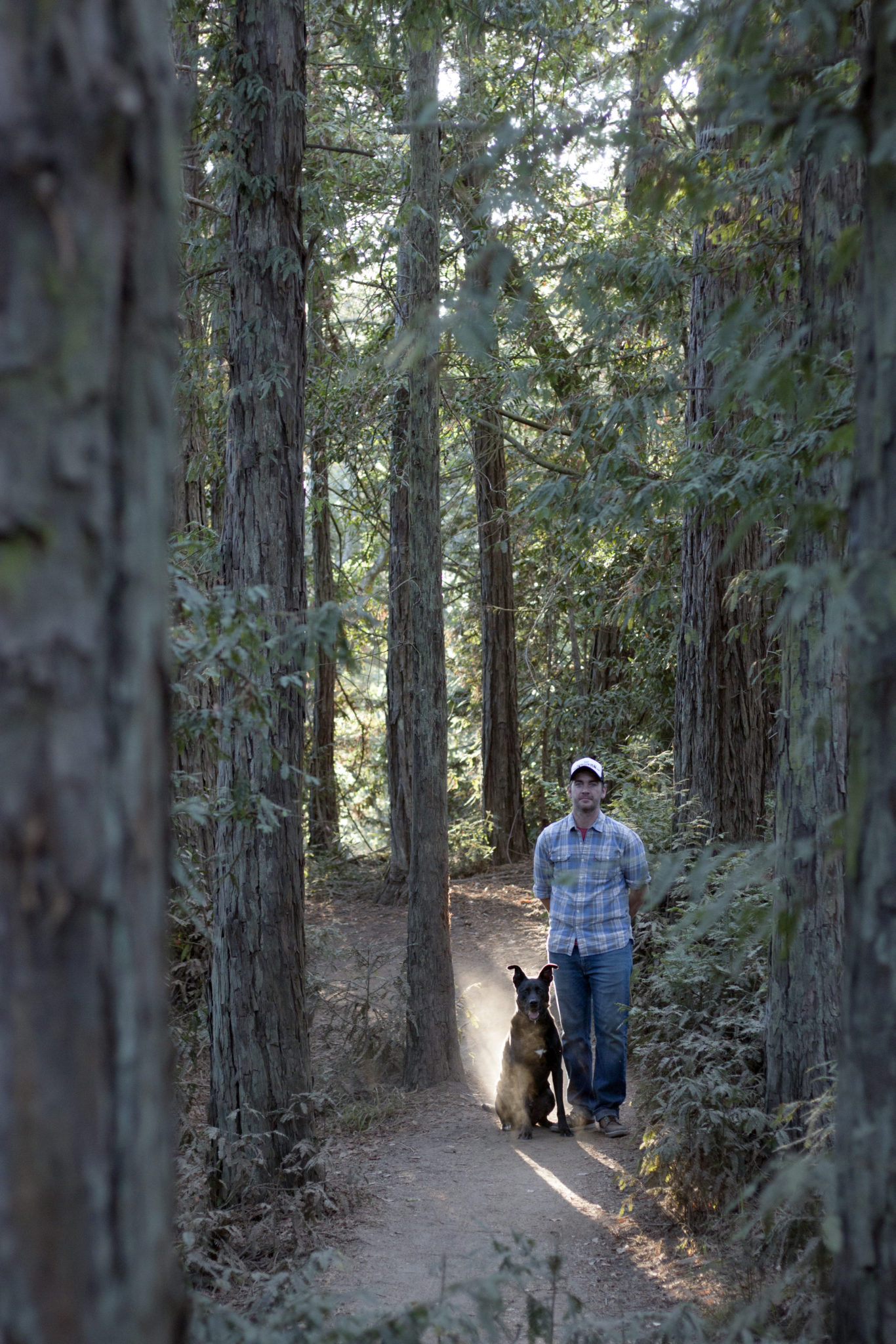 That night I stayed with Krans, and after a hike with him and his dog Friday on Monday, I did
a podcast with him. Thanks for having me, Brian. 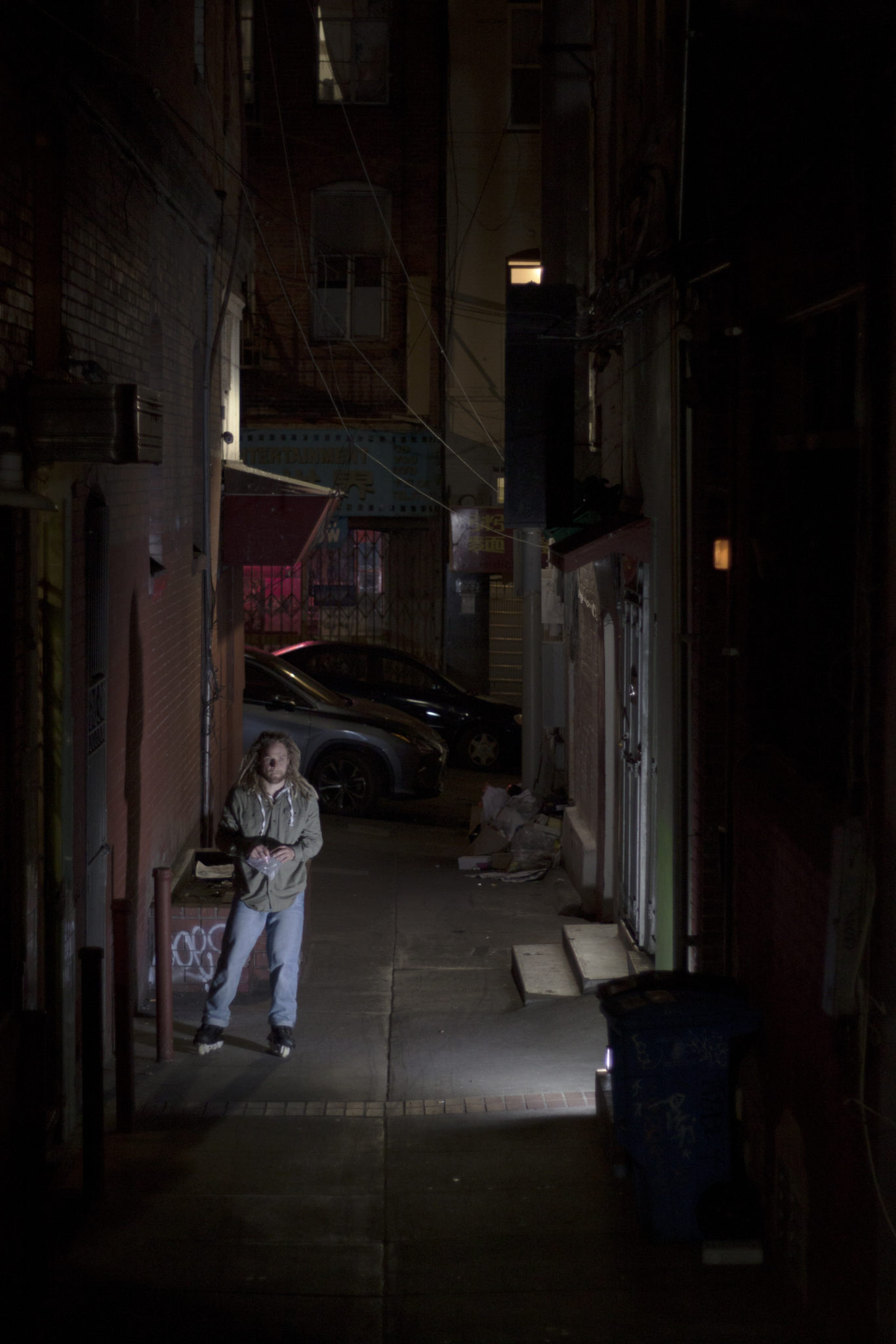 Monday night I took the public transport to Cameron’s house. As I am walking towards his house,
I see Cam and his dog Pete walking towards me; it’s always nice to see friends in their own environment, it also feels so normal to be at their houses. 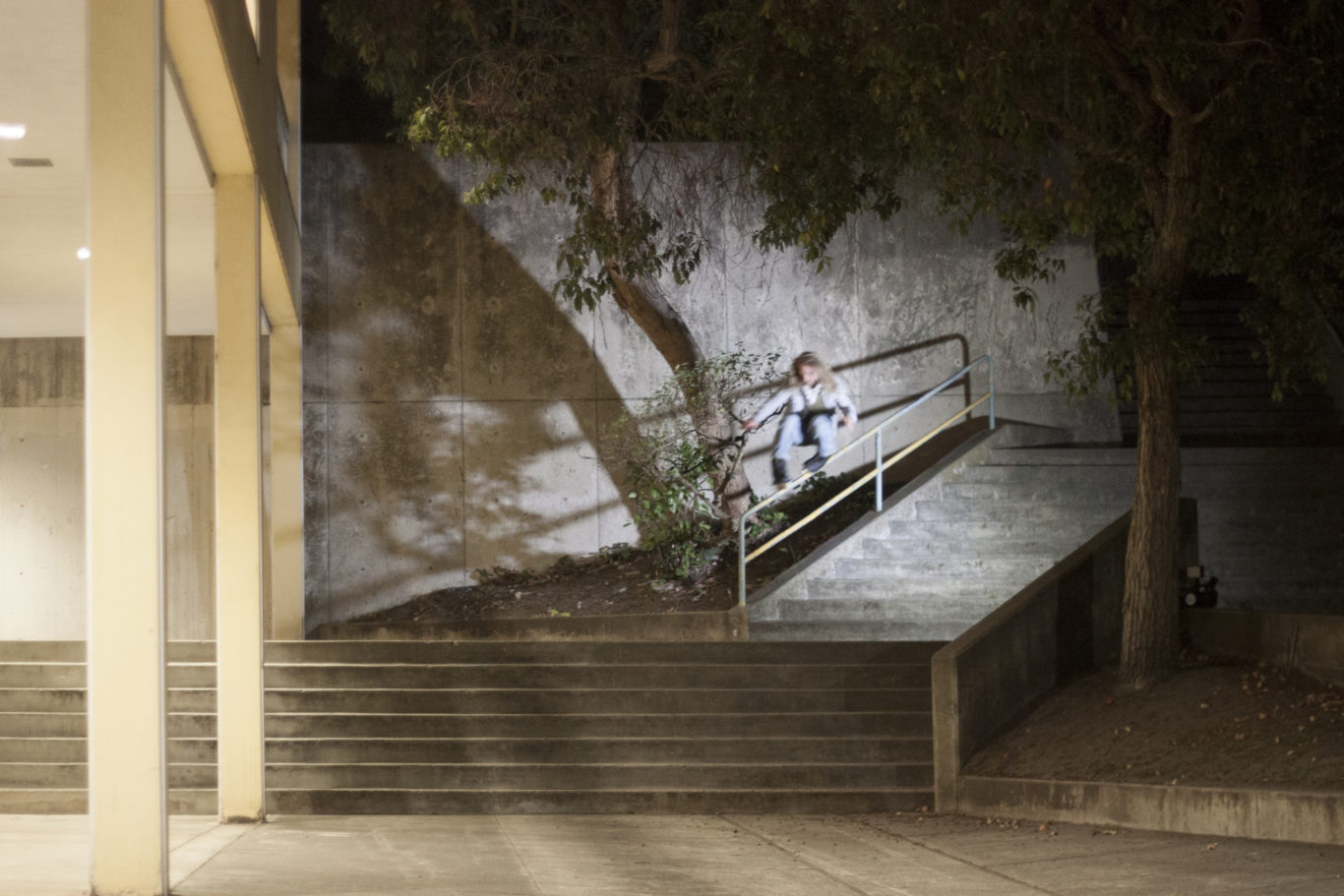 We began to strategize: what would be best to do?
Film at night and the weekend?
Do a bunkers section?
A night only section?
Being it that Cameron injured his groin, we decided to just start at night and see where it
would lead us. 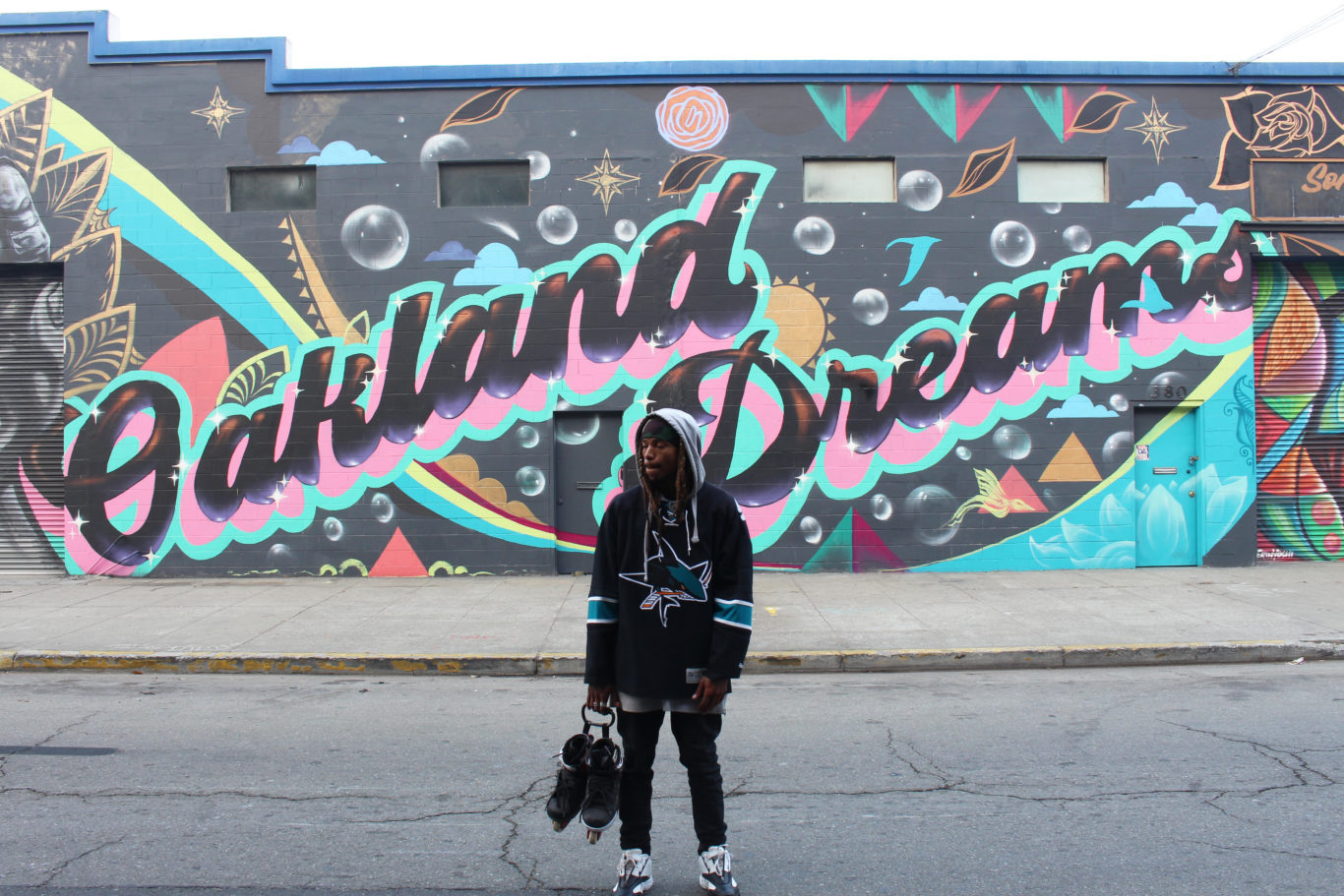 With Cameron having to work during the day, it led me to hit up Brian Freeman and the champ, Philip Moore.
After reaching out to them, both were down to skate several days in Oakland and Berkeley.
My first day, I decided to bike to the city, having been familiar with the city with my trip here  in 2011 to film with Ralf van de Kerkhof for my video, The Breakfast Club, so I knew my way around a bit. 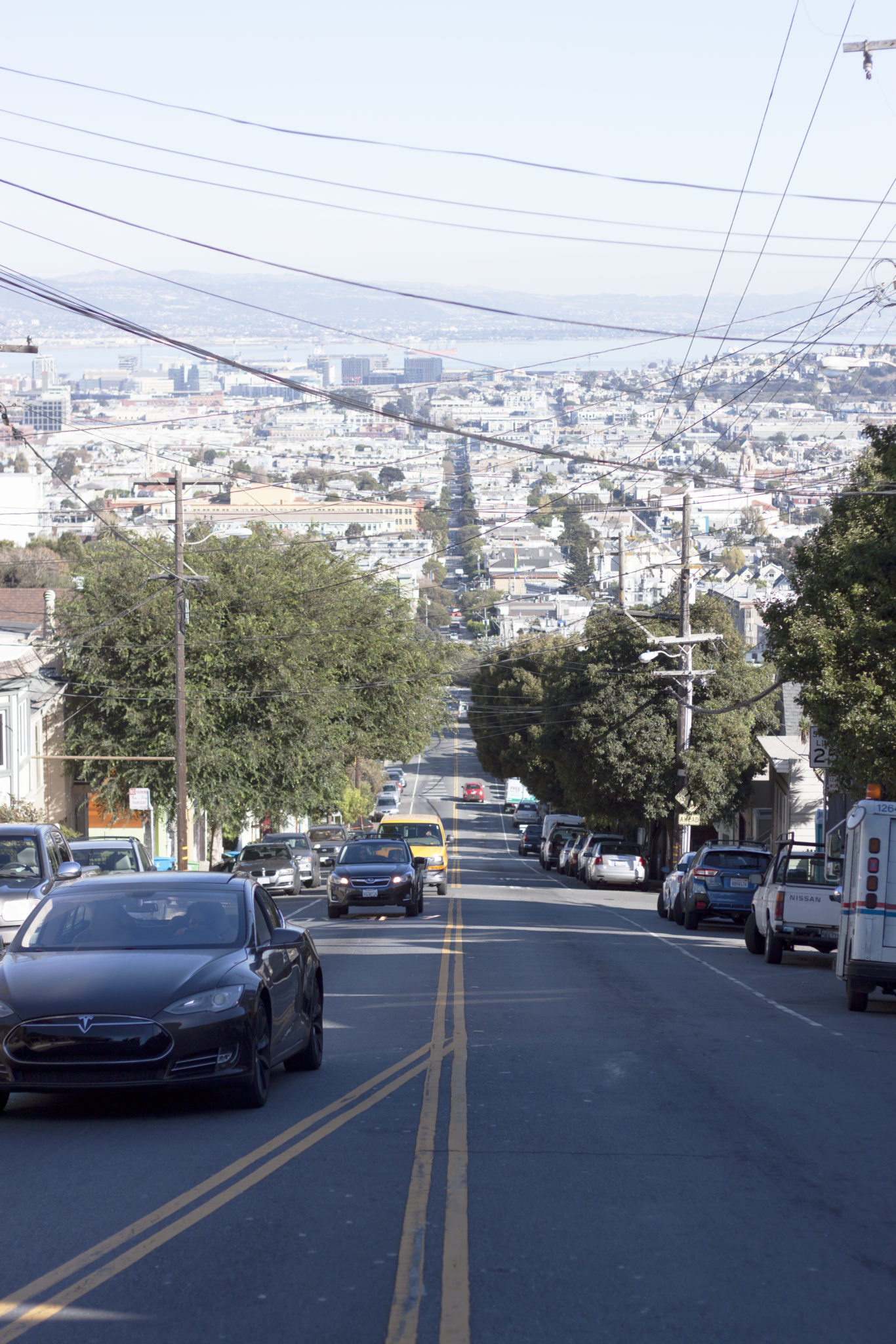 A little rusty on my navigation skills, I fucked up with taking the wrong block, and ended up taking on the biggest hill.
Going down was so much fun though. 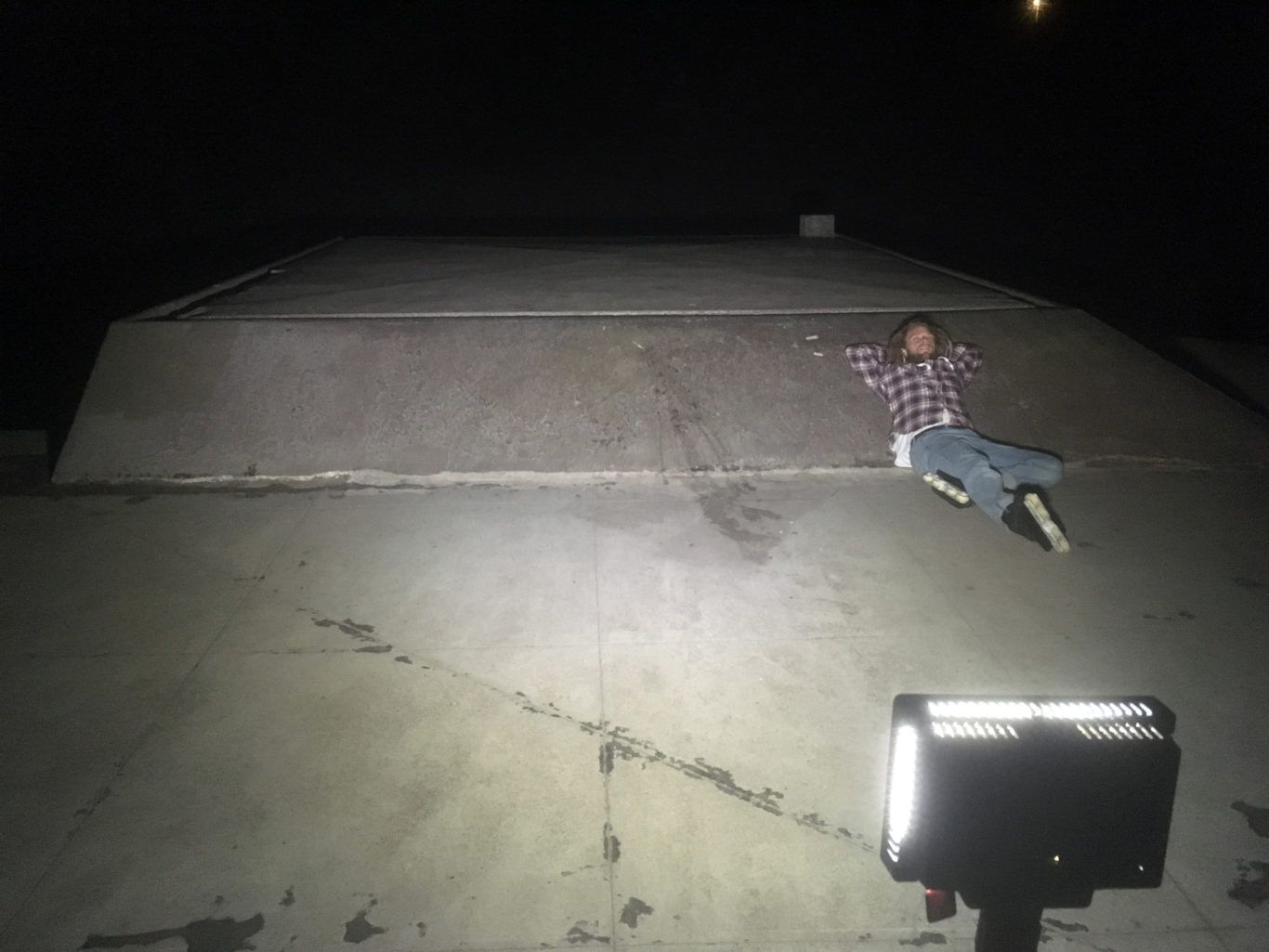 At night, Cameron and I went to get clips.
We had no idea what and where to go, so we started downtown.
The 1st spot was a bust, but we later came back and got the clip after some other spots made us think
what its true potential was, which helped shape our approach on our second attempt.
After 2 nights of filming, we determined that a night edit would be best, and from there, we started to shape the project with every session.
With Cameron’s groin injury, he would need a day’s rest after a session, and  with him being a full time bike messenger, it didn’t make the healing process any easier. 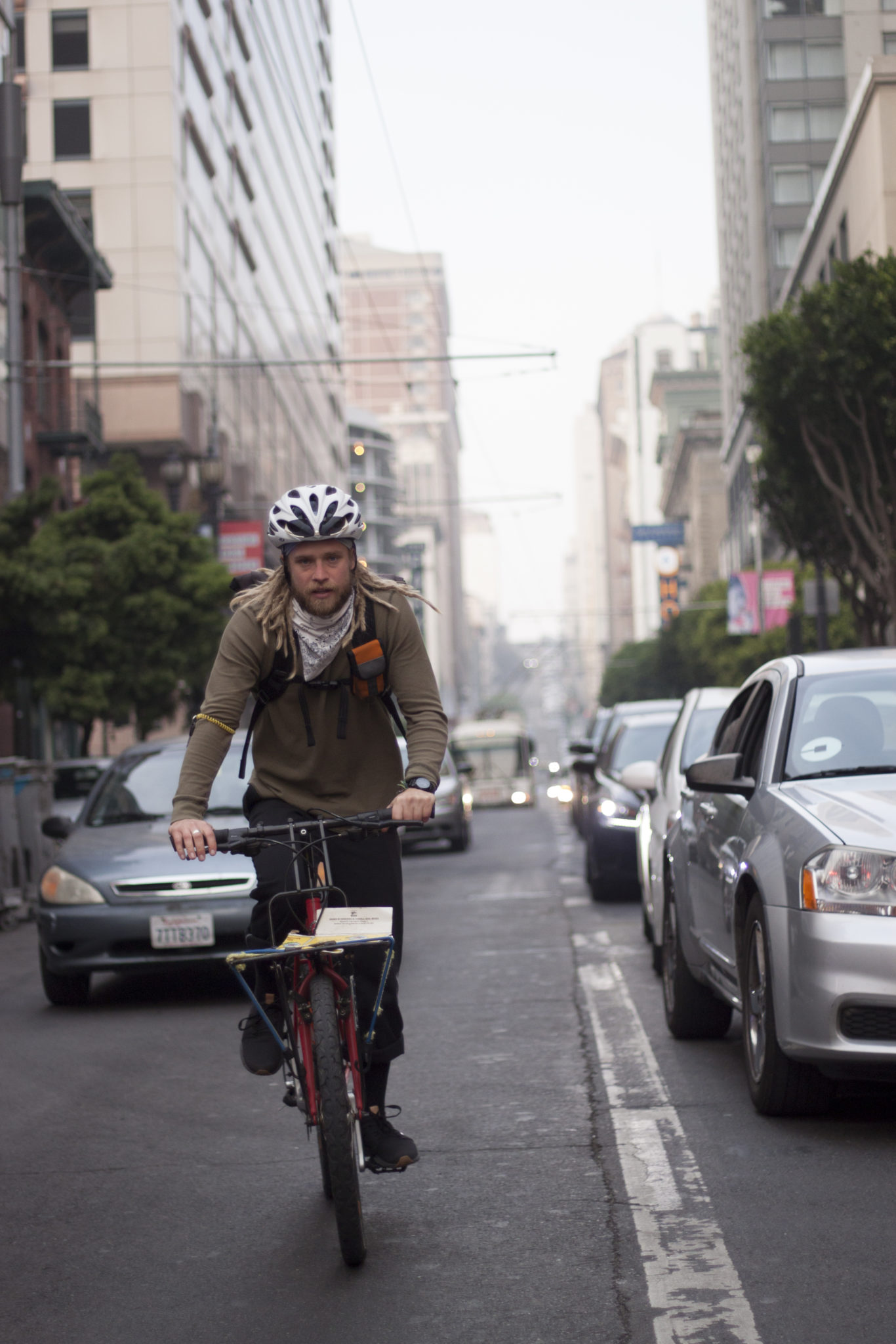 We filmed 7 nights, the last night staying out till 1 am to get the last of the filming completed.
1 night we went out with some more people and my camera just decided to die on me. At first
I thought maybe the battery died, but none of my batteries would let it start.

You can guess what my mood was… I let it rest at home hoping it would magically turn on
the next day. I had my hopes up.

I went to a camera store and the only option was sending it to Panasonic.
I felt a bit defeated; on my way back to Cameron I was even thinking of booking a flight home.

We arrived back at Cameron’s and he asked if I wanted to go to Ivan‘s birthday.
I said ‘why not’ let’s make the best out of this grey day.
Arriving at Ivan’s place I see Victor Arias and he asked if my camera was working again.
When he heard that it wasn’t, he told me to ask Ivan if I could borrow his old camera, telling me that it was just
collecting dust at his house. (I thought he sold the camera since he changed his set up)
Before I had the chance to ask Ivan, he already made the offer to loan it to me and to drop by tomorrow and
pick it up. 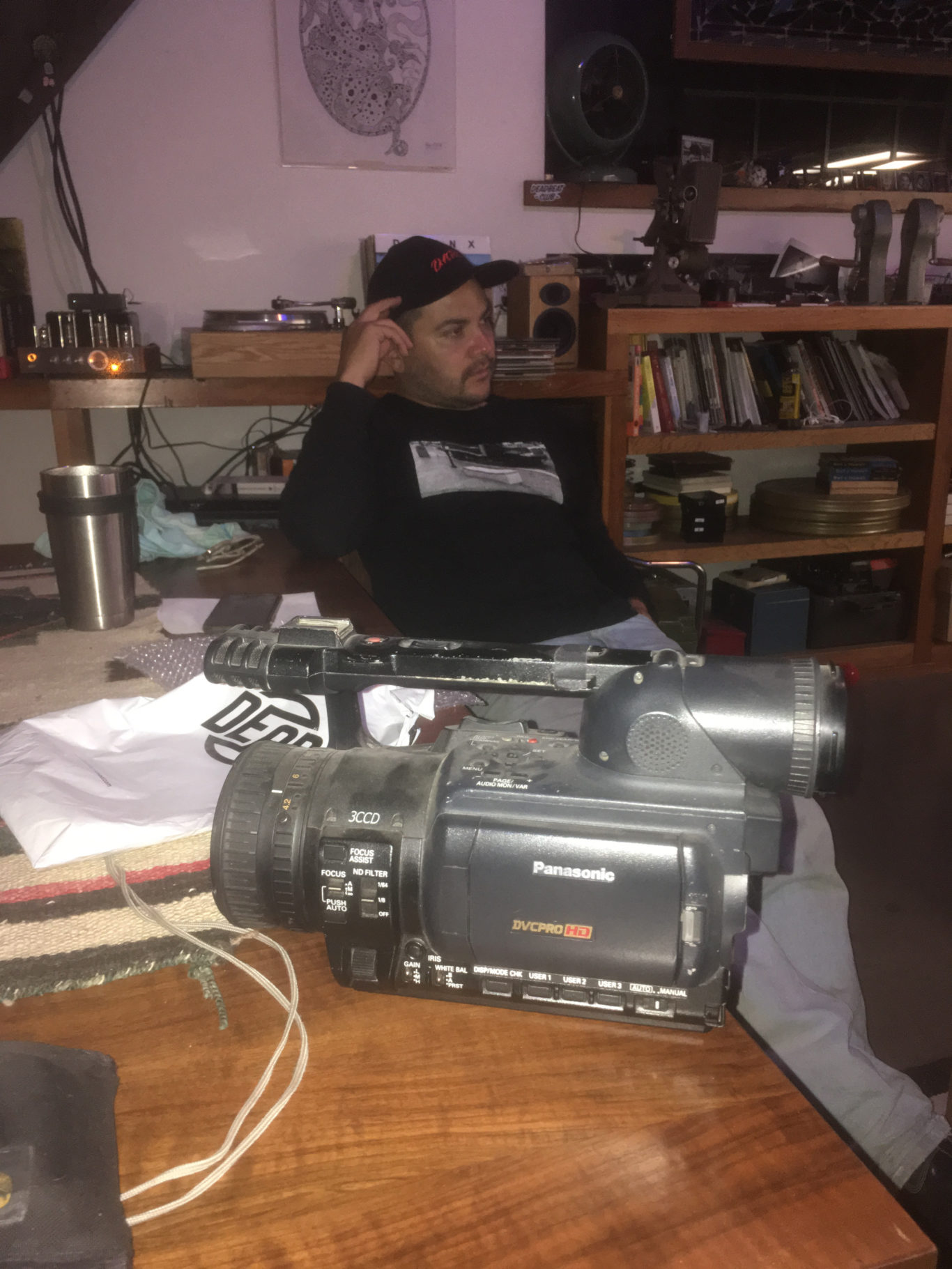 Ivan Narez came to the rescue, loaning Cavin his old camera, which allowed him to continue filming throughout the rest of his trip.
Photograph by Cavin Brinkman

My trip was saved by one of my inspirations and friends, I was buzzing.
We watched Ivan destroy a piñata while almost decapitating some of his friends.
I got to watch VALO 6 for the 2nd time now with all the Bay Area homies too; needless to say that was
something special. 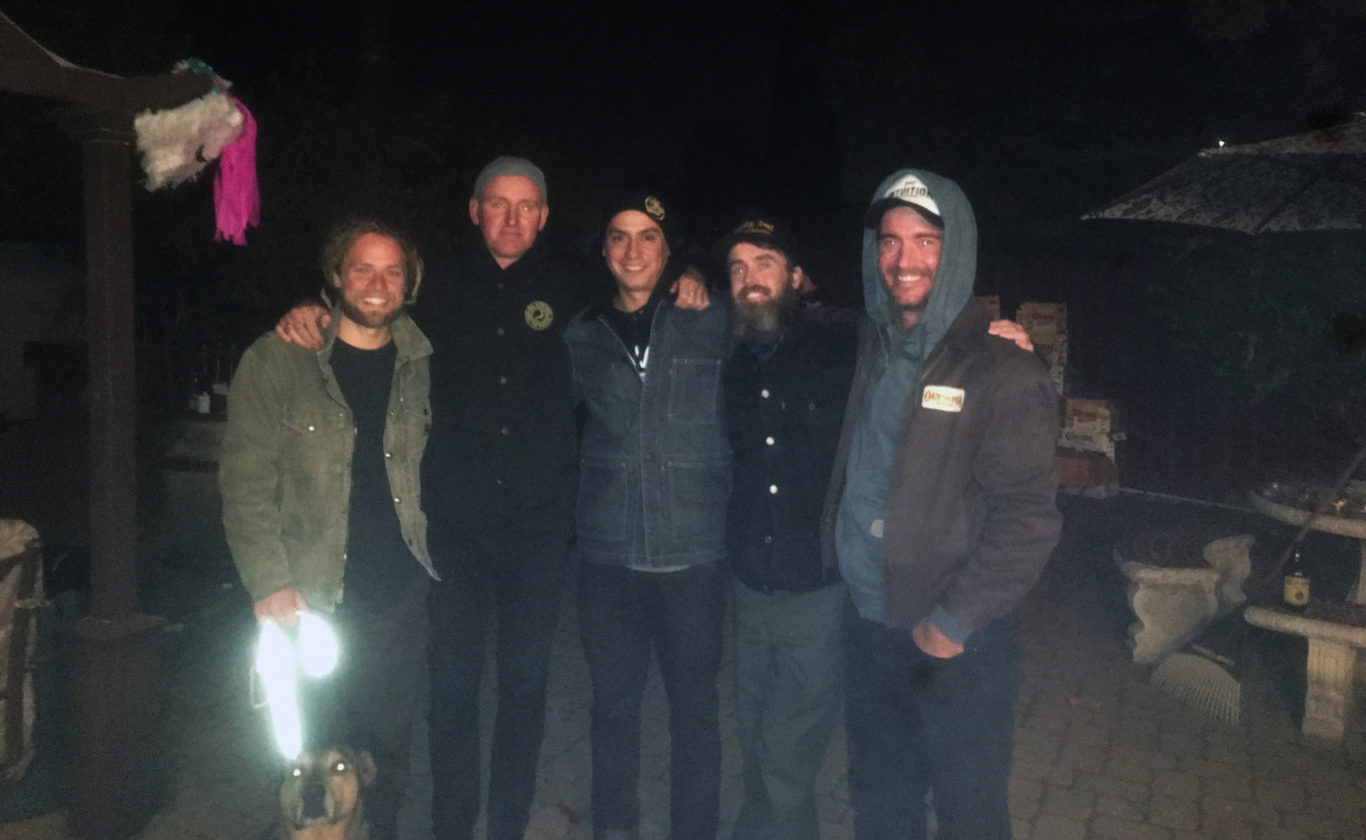 During the days I mostly skated with BFREE, Philip and Victor Daum from Paris, who was visiting for about a week, as he was at the beginning of his year trip around the world.
JP from BUTTER TV was also there to shoot a feature on BFREE. 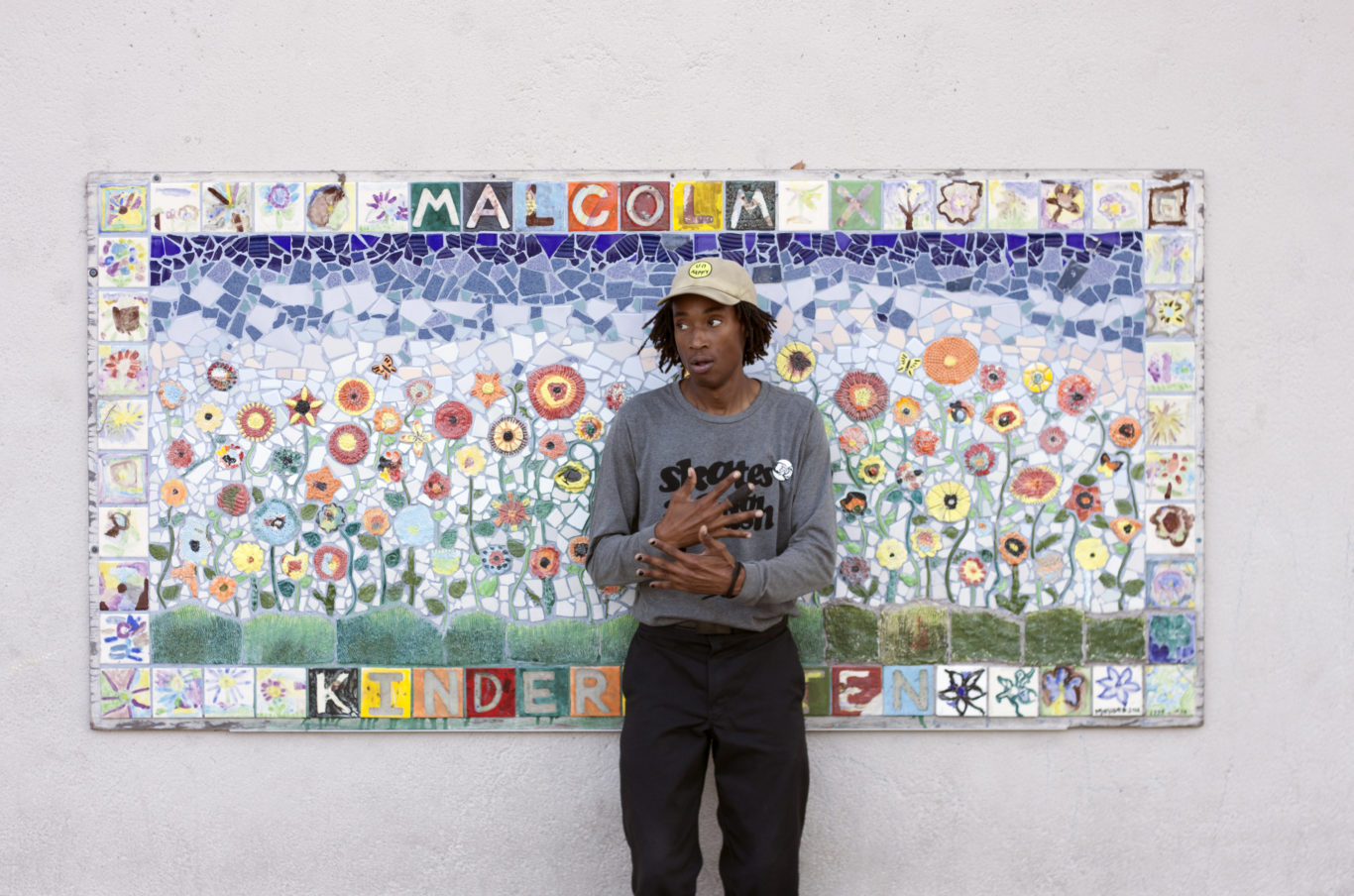 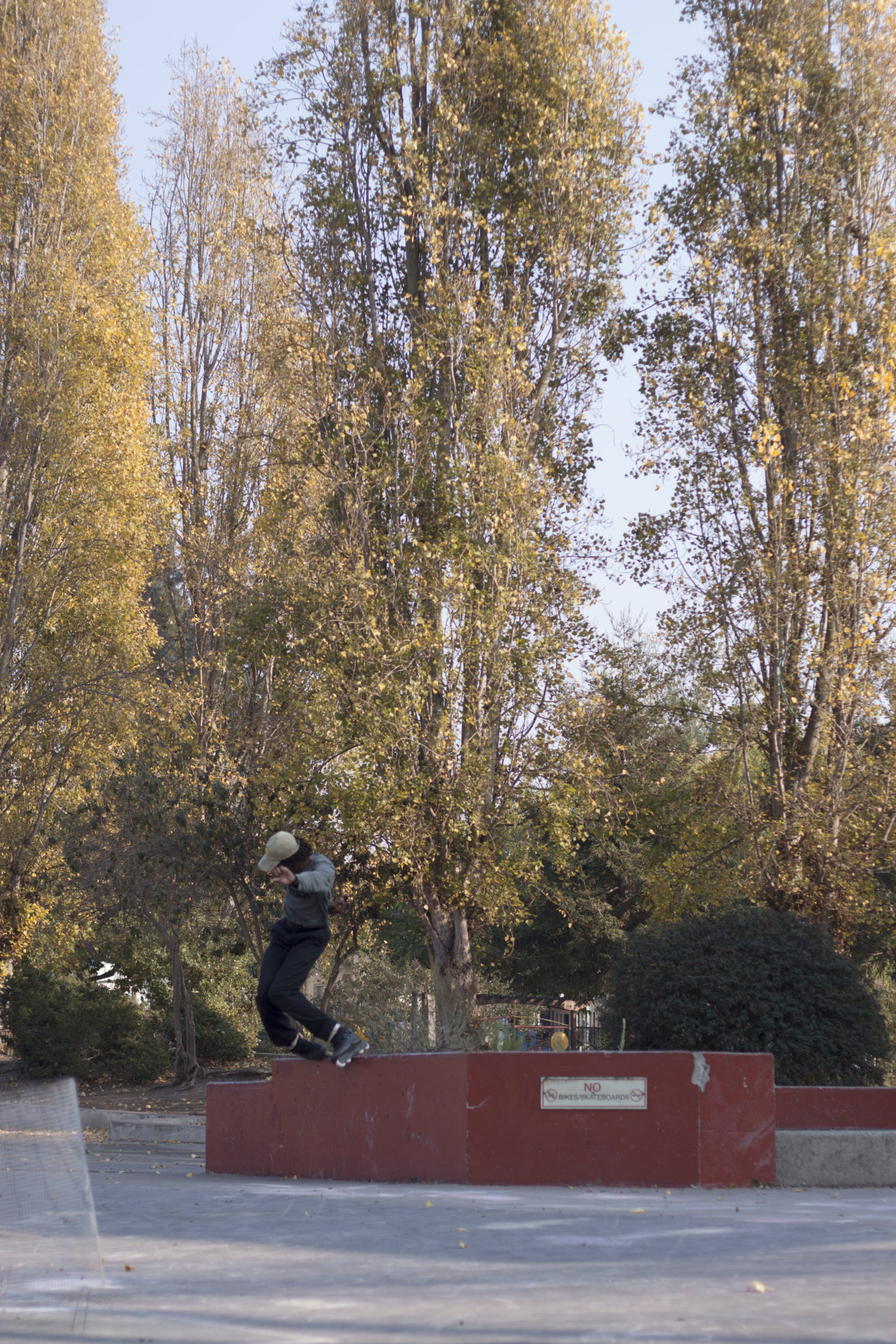 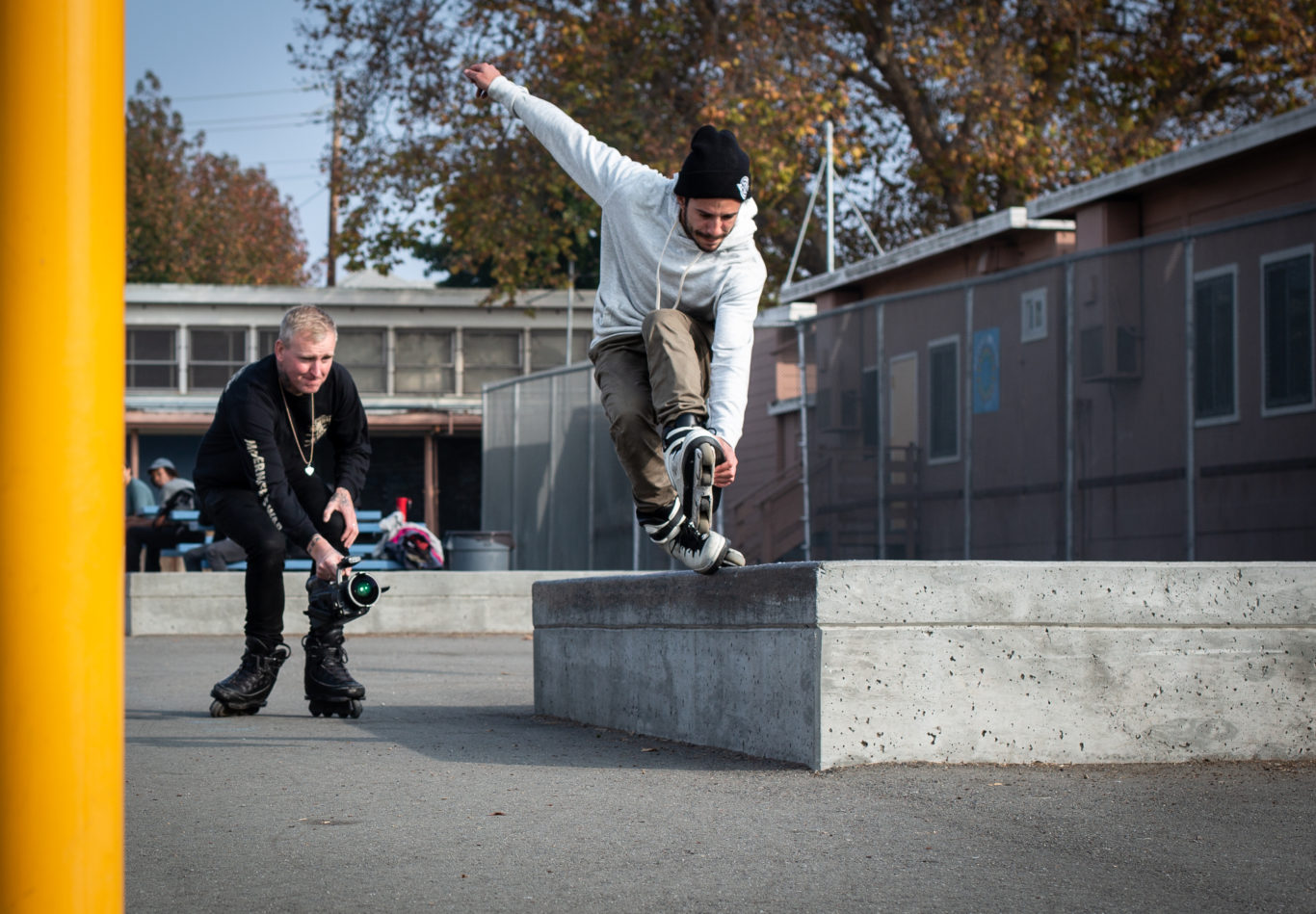 JP Primiano dialing it in | Photograph by Erick Garcia 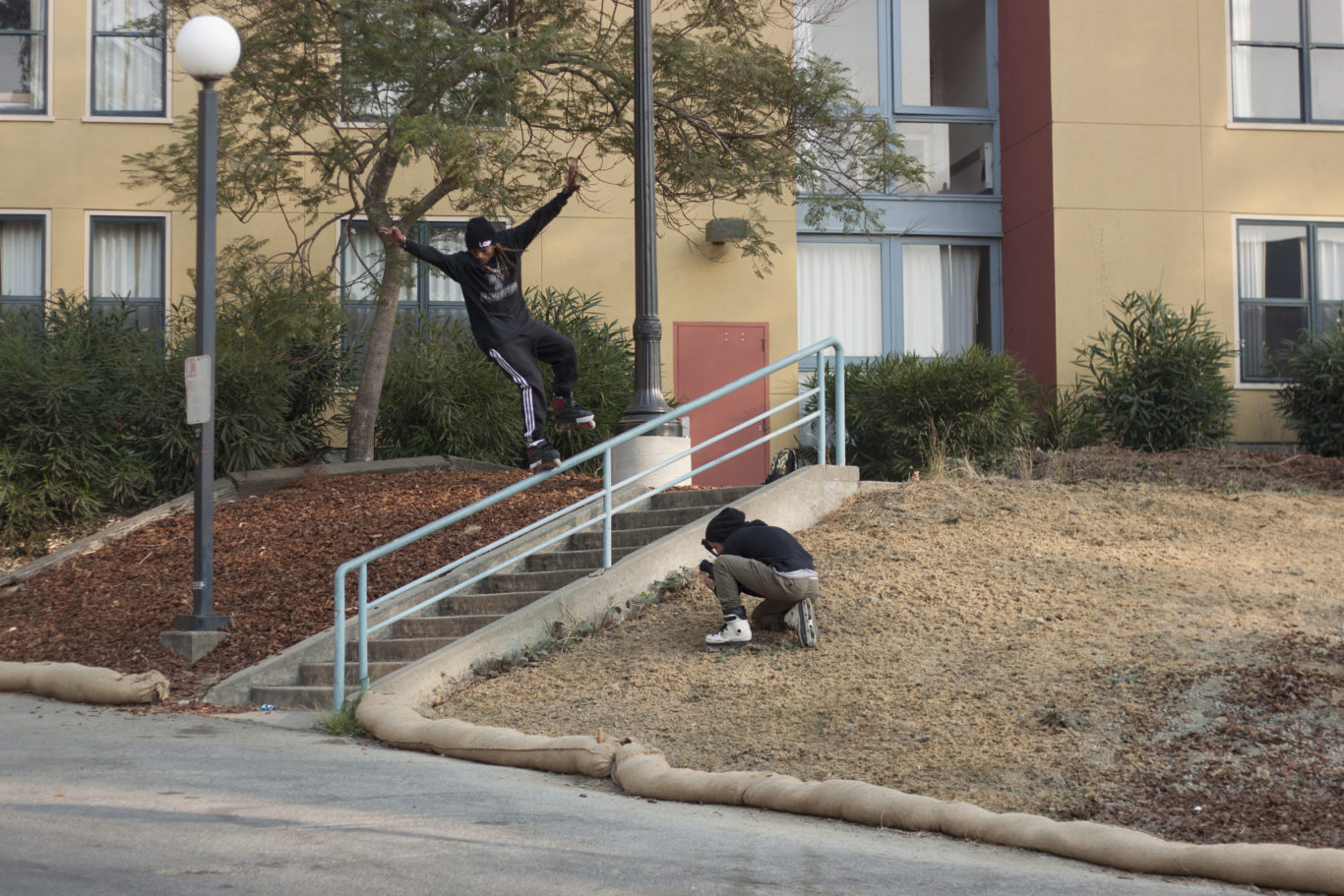 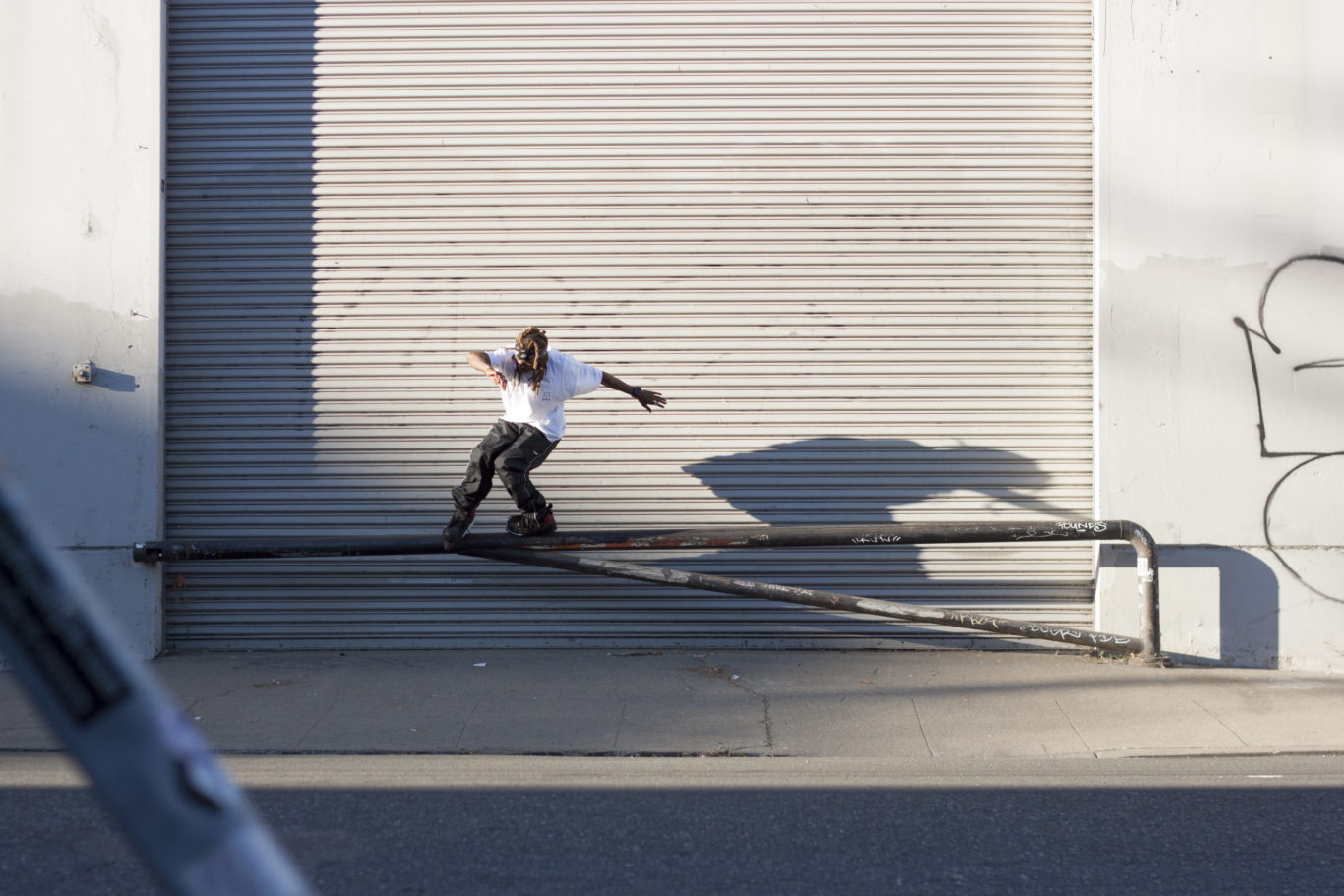 B Free with a Top Soul | Photograph by Cavin Brinkman

The following days, the Bay Area was covered in a thick smoke due to the forest fires.
My nose was full all the time I was there; one of my ears was clotted for 3 days.
People were walking around with mouth caps and masks.
In the beginning I thought Americans over think everything, but it was not like that at all.
For two days I did not even go outside because you could barely breath; the air was filled with a toxic, ammonia-type smell. 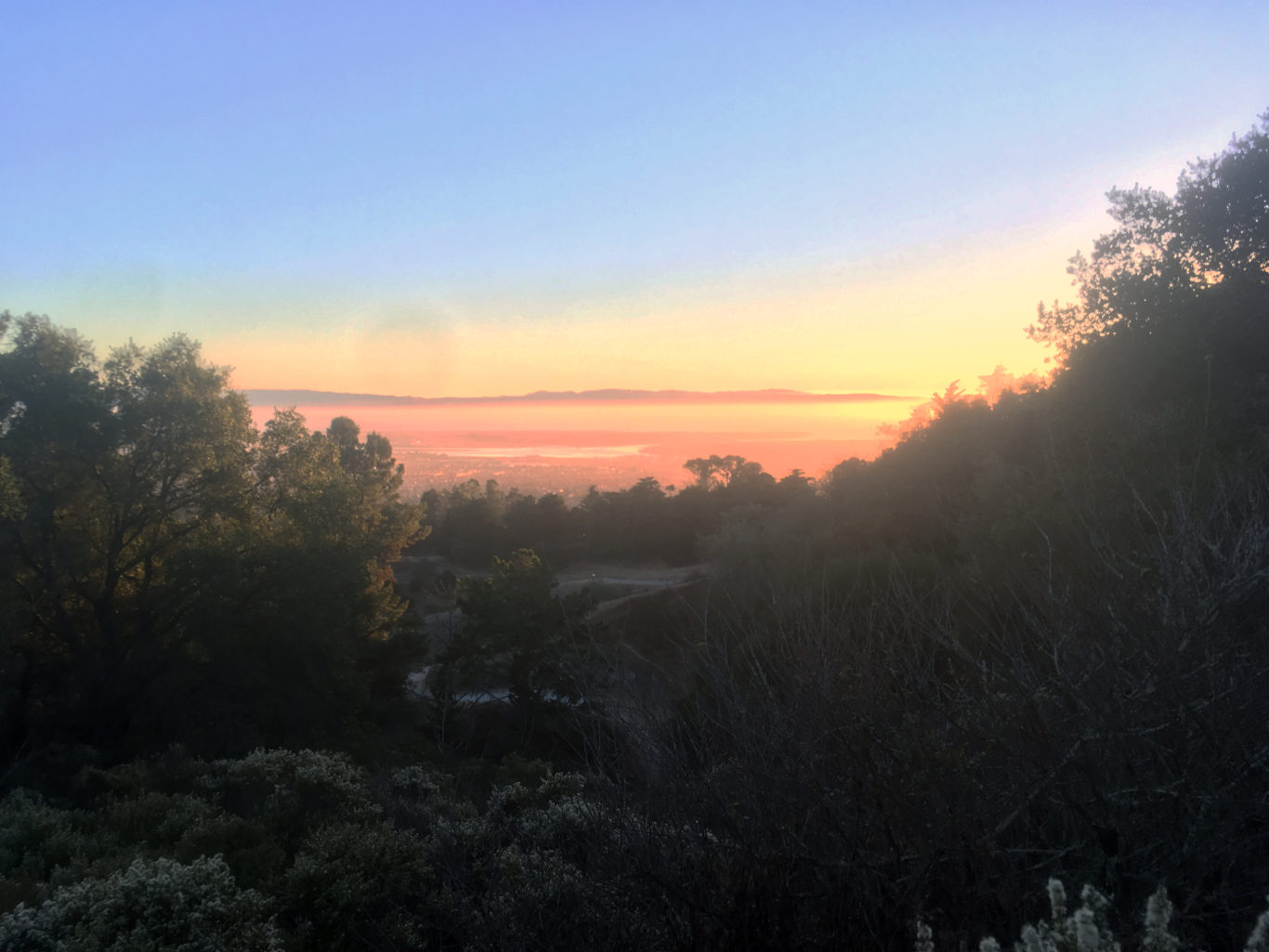 We skated mostly Oakland and Berkeley during the days moving forward
Erick Garcia, aka Mr. JSF himself, joined a few sessions to shoot pictures and even one session he strapped on the old K2’s and
got some clips of him on the camera. 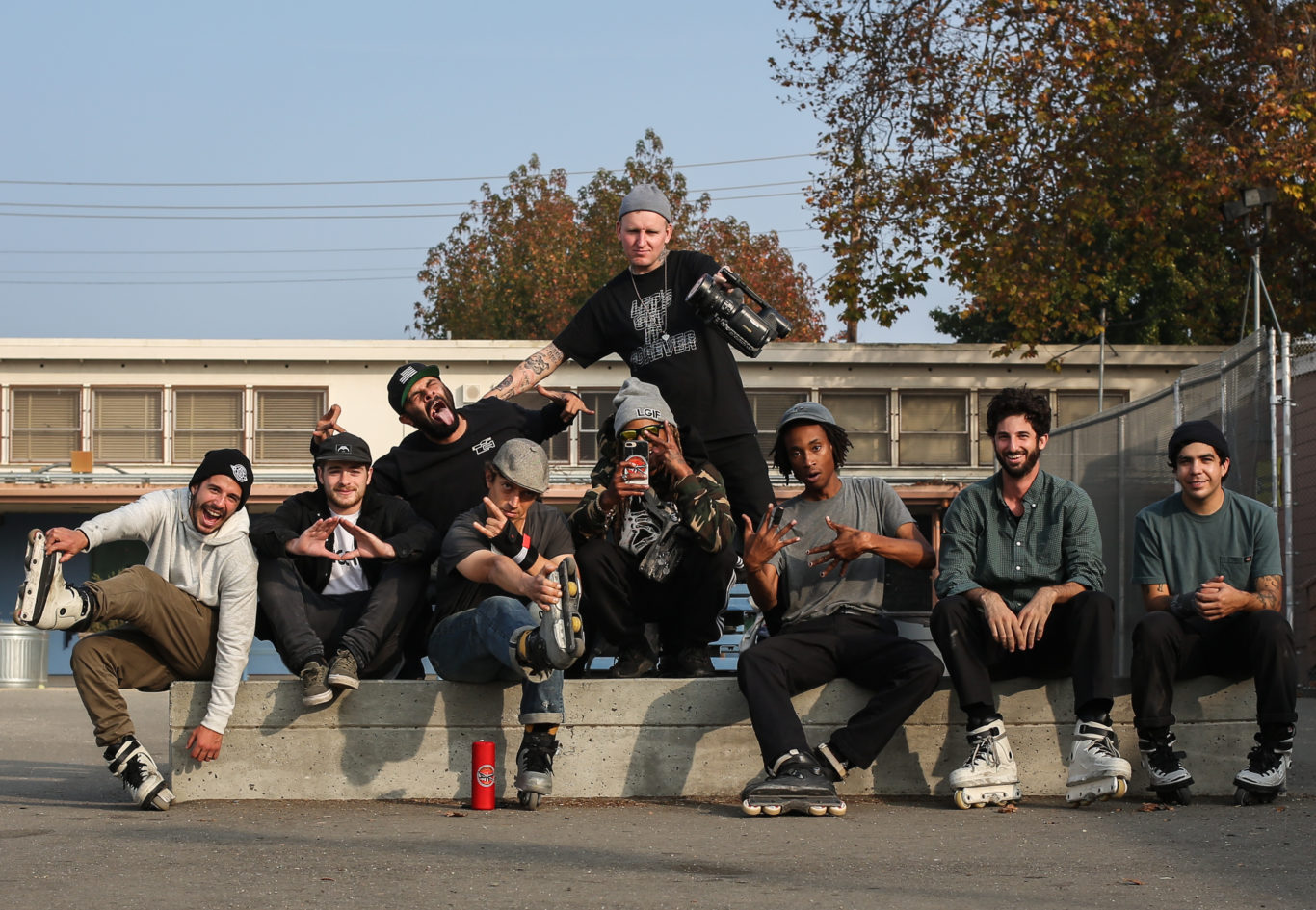 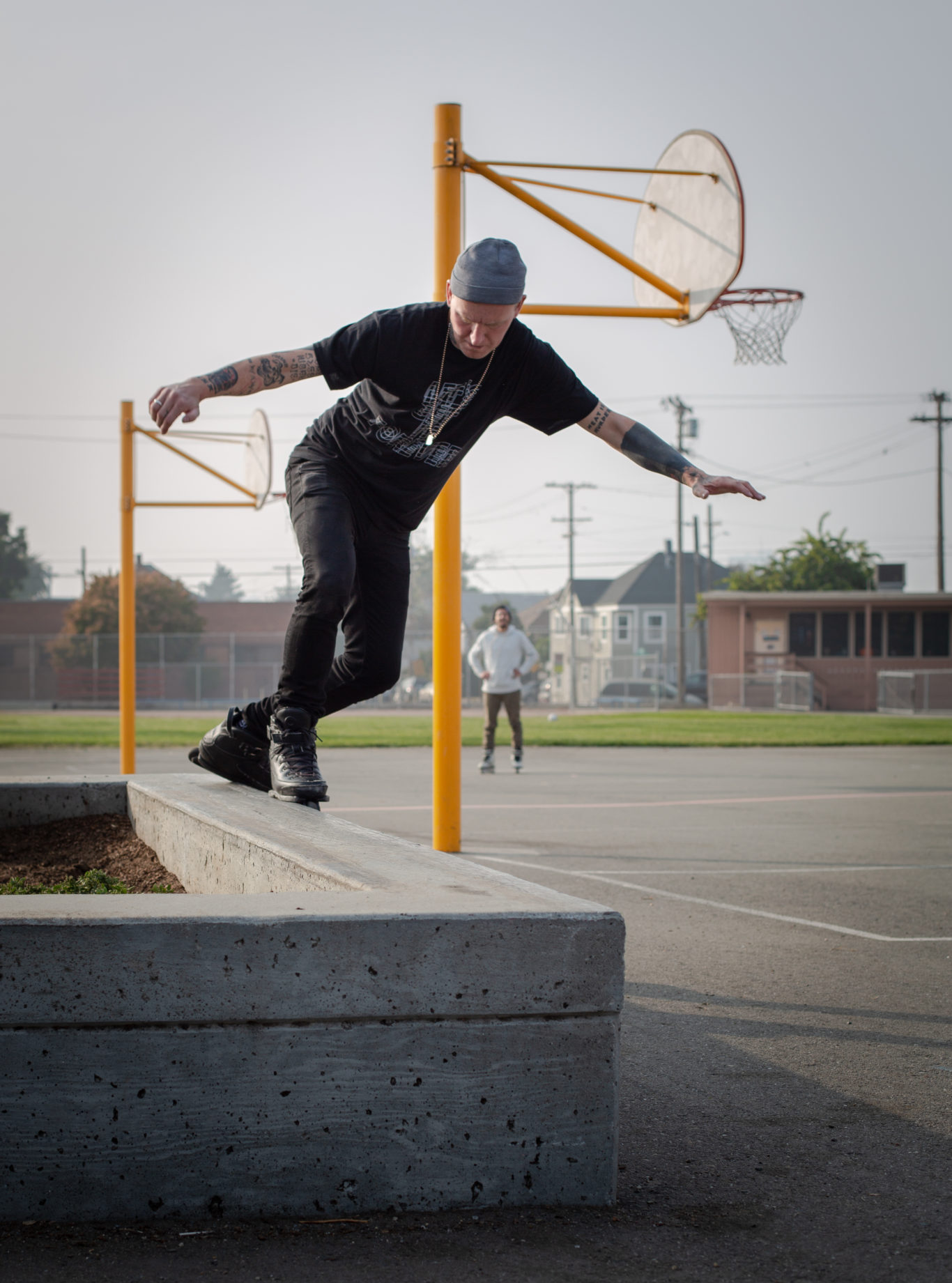 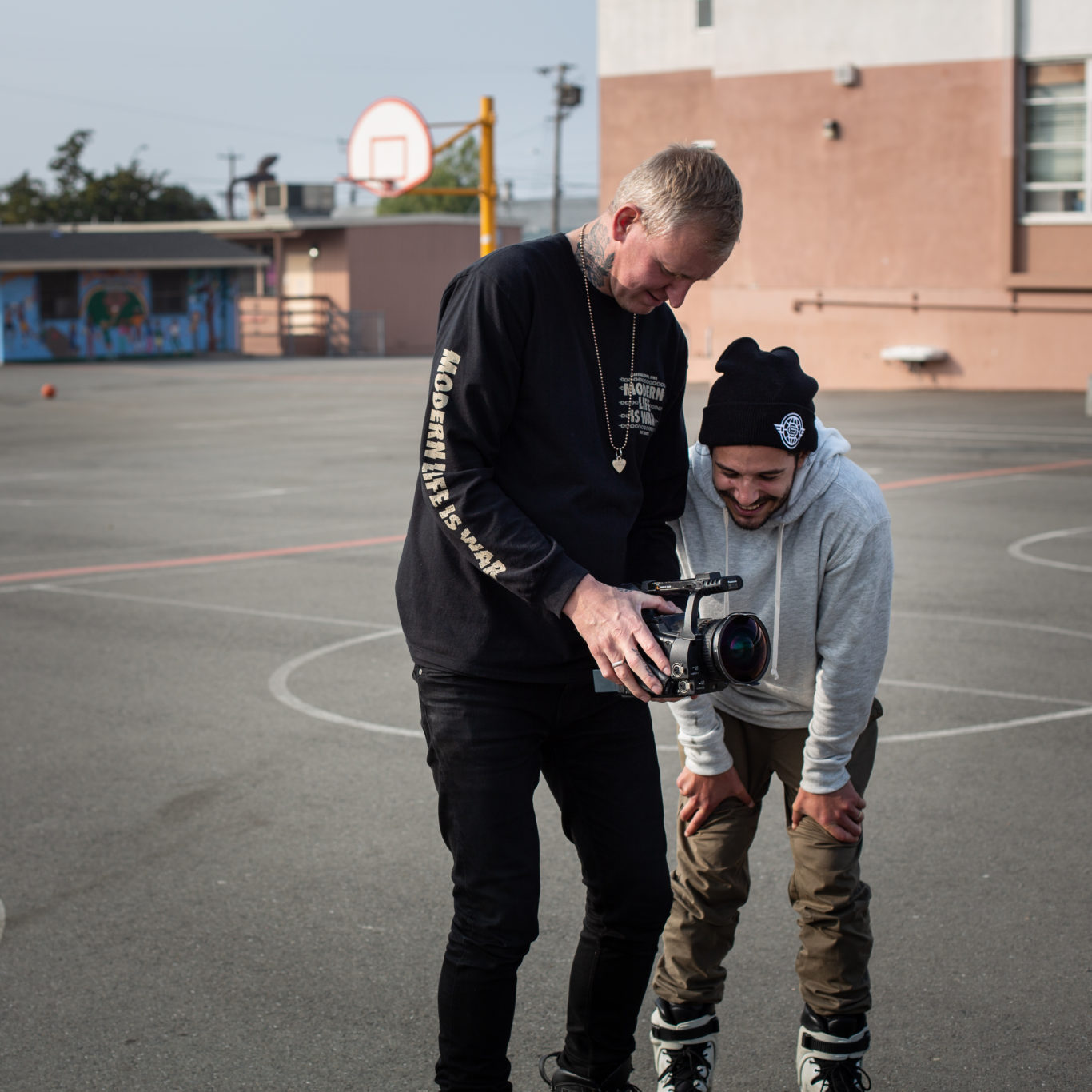 During one session, Lonnie Gallanos facetimed BFREE in the car.
B picks up and who do we see on the screen? Rob G!
They were in town and planned skating the little skate park.
We needed to see them no matter what.
We finished the session and went to the park.
JP and Victor never really met Rob, but me and B did many times.

It was SO good to see him (on blades) and receiving his famous hug.
The best part of this all was his constant smile from ear to ear nonstop.

Rollerblading and its powers are so beautiful.
This trip made me realize this over and over again.
SF and the Bay Area have a great scene; I wish I could have explored more because all the JSF
people I met were nothing but nice.
I want to thank Casey, Cameron, Ivan, BFREE, Victor and THE CHAMP Philip Moore, and everyone else
who made this one a one to remember. 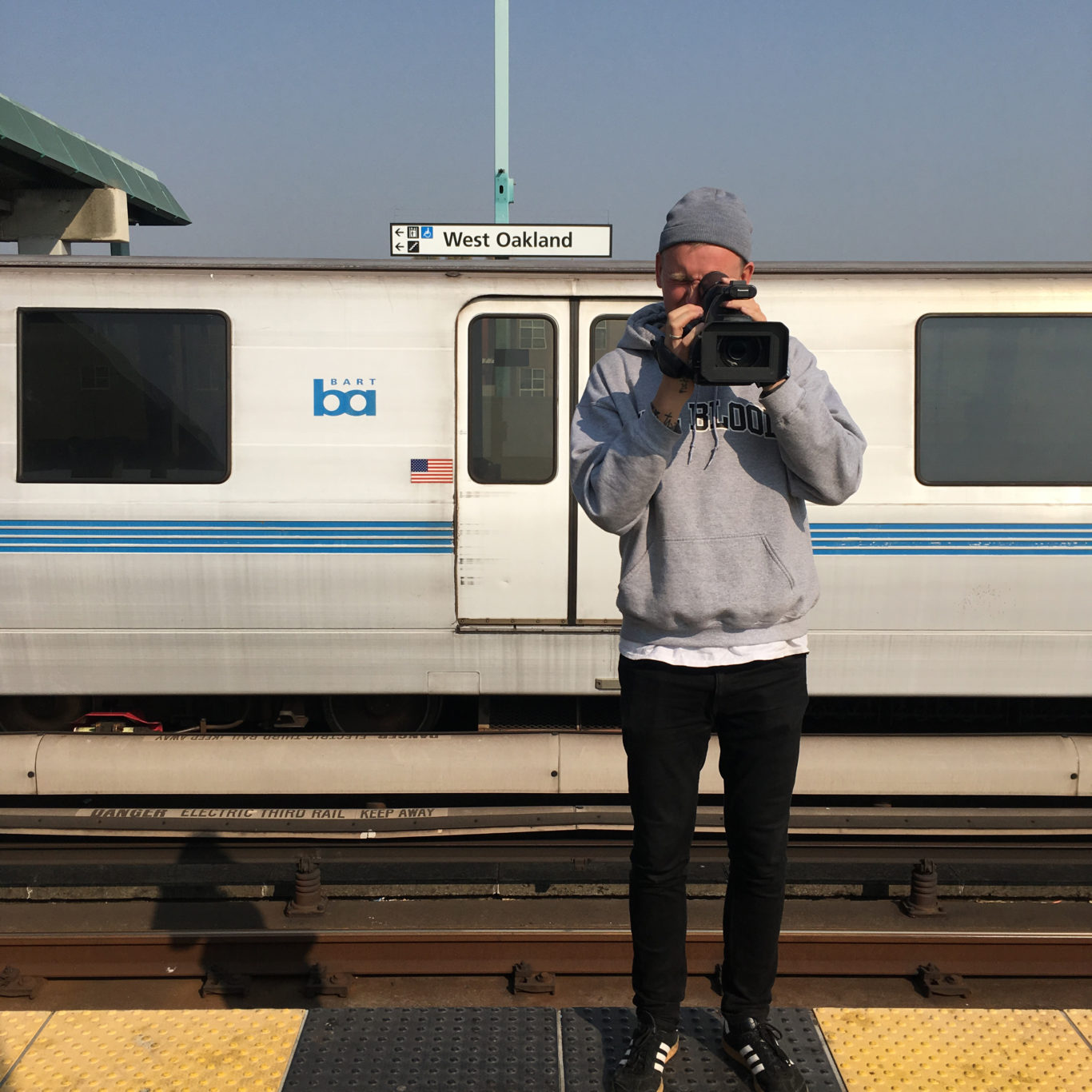 Cavin Brinkman lives in Amsterdam. “My current job is living my life the way I want to live it”, he says of his current occupation.