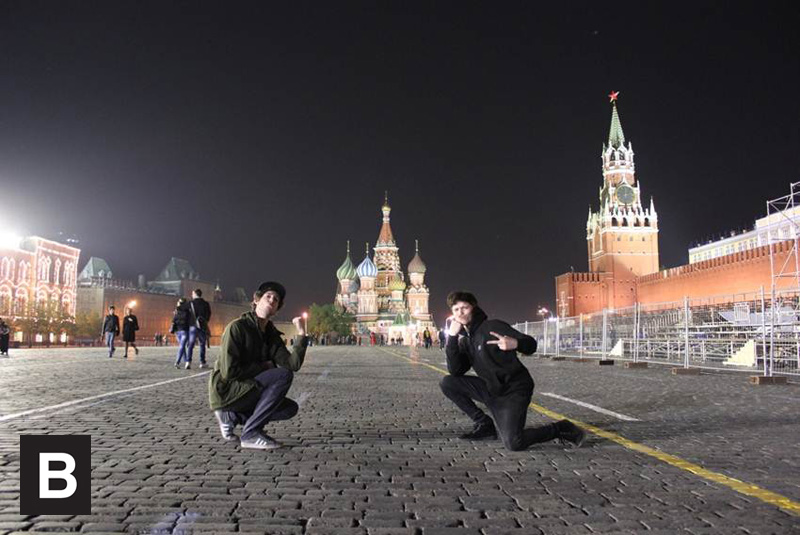 Last month 2 of USD‘s elite riders Nick Lomax and Elliot Stevens packed their bags and flew over to Russia to show respect to fallen blader Andrey Zaytsev.
The unfortunate death of Andrey sent tremors throughout the blading community. Like an earthquake the shock wave was first felt by those closest to Andrey, his friends and family. But the ripple of bereavement soon spread the world over, touching anyone who had ever been lucky enough to skate with, drink with, or watch a video of the talented athlete.
The ripples have since echoed back to the epicentre, Andrey’s hometown, Moscow. Two of Andrey’s friends and prolific UK skaters, Nick Lomax, and Elliot Stevens rode the surge deep into the heart of Russia to compete in the memorial contest held at the humble outdoor park designed and built by Andrey himself.

Below is the personal account from Nick and Elliot on how they commemorated Andrey’s death and celebrated his life.

“THEY’VE LOST MY FLIPPIN’ BAG!”
As the landing gear unfolded and the tyres screeched on the tarmac both Elliot and I began to feel very anxious. To add to this Elliot’s bag had managed to not find its way to Moscow, leaving him without clothes or skates for two days, not the best start to our adventure!
It was beginning to feel that we were going to be engulfed by Moscow; that the iron curtain would close behind us and leave us to wander through frantic traffic and marvel at the concrete mountains around us.

Fortunately, our worries were put to rest when we met with the tour organiser, Boris, his partner, Tanya and some cold beers. Soon enough lager was swapped for cognac and as we sipped it by the Moskva River the previous anxiety we felt was now being swept by the gentle currents out to the Caspian Sea.

Now, I can confirm firsthand that Russians are serious boozers. So, in exchange for lessons on English slang we were taught how to drink Moscow style!
MERRY NIGHTS MAKE SAD MORNINGS

It wasn’t until late into the afternoon that Elliot and I managed to crawl out from our beds and attempt to shake off a noxious hangover. After,  some very late breakfast we finally strapped our skates on and headed out into the urban yonder of Moscow.

Street skating in Moscow is incredible. The spots we skated are, in my opinion, unparalleled by any other city I’ve visited. But with a boozy cloud hanging about our heads and security officers that look like juiced up Robo-cops it was difficult to get a lot of footage.

Fortunately, after the contest we had a few days to relax, recover, successfully escape the eye of ‘Big Brother’ , and get some comprehensive shredding done. Not only did we tear up the streets, but with the Euros coming up we also represented on the football pitch. I have to admit I’m better off being the goalpost, but it was awesome to see an inebriated Elliot run rings around our opposition.
MAY HE REST PEACE

The contest took place on the Tuesday in the mini-park Andrey had Designed and built. Skating was a major part of his and so it was natural to hold the contest in what we would consider his memorial; a true testament to what an influential figure he was and continues to be.

Even though the weather took a turn for the worse, causing us to move to a larger, sheltered BMX-style park, spirits were very high. This was reflected by the sheer turn out and the high level of skating displayed on the day. I was extremely thankfull to win the contest which was capped off with a moving speech and a heartfelt toast to the late Andrey. The toasts continued throughout the night and well into the small hours of the morning.
Although the skating and partying were both unbelievable, the highlight for me was being privileged enough to meet Andrey’s parents. They displayed tremendous character and strength and I trust they were touched by the support shown from everyone there.

Moscow is a truly magnificent city. Elliot and I plan on returning next year to pay our respects and shred once again. Gone, but never forgotten.