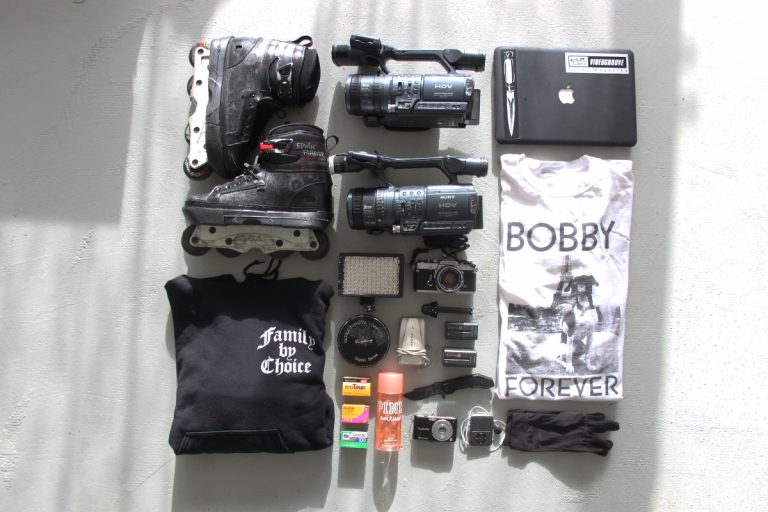 If you ever encounter Cavin Brinkman at either a blade event, music concert, or just randomly in the streets, chances are you will remember him all the same. His tall stature stands out in any crowd, and his outgoing personality and hyperactive temper make it quick to connect with him. Whether he likes you or not, he will also make sure you know right away: straight to the point, no bullshit.

More importantly, Cavin is most likely to be holding a camera at pretty much any time. From filming to shooting pictures, digital to analog, the man shows no restrictions and if he has some favorite tools, he won’t mind snapping a quick shot with his phone if it comes down to it. From the live acts he films to the numerous blade edits he produces: shit will get done, no matter what.

Two days ago Cavin released his latest piece in collaboration with our friends over at The Booted. He spent a year filming with stylish French blader Clément Boucau, and the effort they put in shows in both the skating showcased on screen, and the craftmanship behind the camera. Needless to say, that was quite the perfect time to catch up with Cavin and take a look at his Travel Essentials!

What’s your destination this time and how long you’re on the road?
My destination for this trip will be Paris, France. I go there for 2 reasons. I have a gig to film from the band SKIP N DIE and then I stay 1 week there at my girl’s parents’ house and I will film with some locals like Louis Vilar, Warren Digne and Stan Kogutyak. Then at the end of the week Clement B. comes to get some last tricks for his Booted part… Although due to bad weather we added one last Amsterdam trip to the project to finish it all.

What’s the one item you wish you would (but you don’t) have for your travels?
My dog. If I am flying I cant take him. When I had Bobby he would come everywhere with us skating if we took the train or car. Now I do the same with Elliot, but sadly flying is shit for them so I have to leave them home.

Favorite airport?
Is there something as a favorite airport? They all suck equal. Bad wifi for only 20 minutes. Expensive food (if i can even find VEGAN food). Lines are always long. They always take my bag out since it’s filled with cameras etc. But I know all of this so i just go there and let it be what it is. Before you know you’re trough the gate in your seat next to the window flying to a new experience.

Your trick to beat jet lag?
ADHD ahah! Naah just book your flights good. Make sure if you fly from the EU to the USA that you leave early morning so you land around 6pm (on the East coast) so it’s midnight in your head. Eat and drink, some talks with your friends, stay up until midnight there and then sleep a good 5 or 6 hours and voila! No jet lag. For the way back, land back in the EU early and don’t sleep before 10/11 pm you should be fine after 2 days.

Roll or fold clothes?
Fold. I never take that much so it wont take much place anyway.

Any travel tips/suggestions?
Go out there explore and live your life to the fullest. It could be over before you know it (R.I.P. Edwin.)

What I usually take on a filming trip:
Skates: My Valo JJ lights with the Bake frames and 72mm soft wheels so i can film those fast lines.
Film camera: 1 or 2 Sony HDR-FX1E with a Century Optics fish eye lens. Extra battery.
A LED light for night sessions.
Hardware: My laptop to watch porn on those cold lonely nights if my girlfriend can’t skype. My iPod with a play list from The Get Up Kids to Usher.
Photo cameras: My trusty Olympus OM-1with a 50mm lens and a Olympus Mju-ii with some spare photo film. Also a small Panasonic DMC-FS7 digital camera for the quick shots for the blogs or Instagram.
Clothing: Besides the usual clothing I take my warm 623 hoody and my Bobby Forever long sleeve. Some gloves for the colder days ahead.
Protection: A good sharp knife to spread the houmous on my french bread or to cut of a branch of a tree next to a spot. But most of all to be safe in the suburbs of Paris (like Bagnolet) when you film in those ghetto spots it can get nasty.
Body essentials: Some Pink body mist for after skating when there isn’t a shower but you still want to go out and party.
Candy: And for the breaks in between skating some Pez out of a Darth Vader dispenser.

Watch Cavin’s latest production which took him to Paris, Brussels, Amsterdam and Lille: