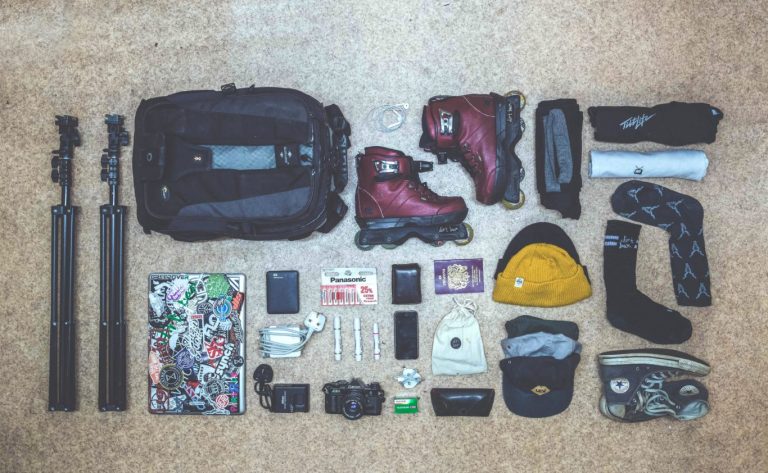 For as long as I’ve been involved in blade photography, Sam Cooper has been a growing name, establishing himself as one of the best modern day blade photographers. His lighting always consistent and appropriate, his framing and capture of action always crisp, it isn’t a wonder why he is a favorite among editors to hire to produce impeccable photo essays. That said, I felt it appropriate with his recent cover of Eugen Enin for ONE to ask Sam what he keeps in his bag and to share and speak about some of favorite photographs he made. 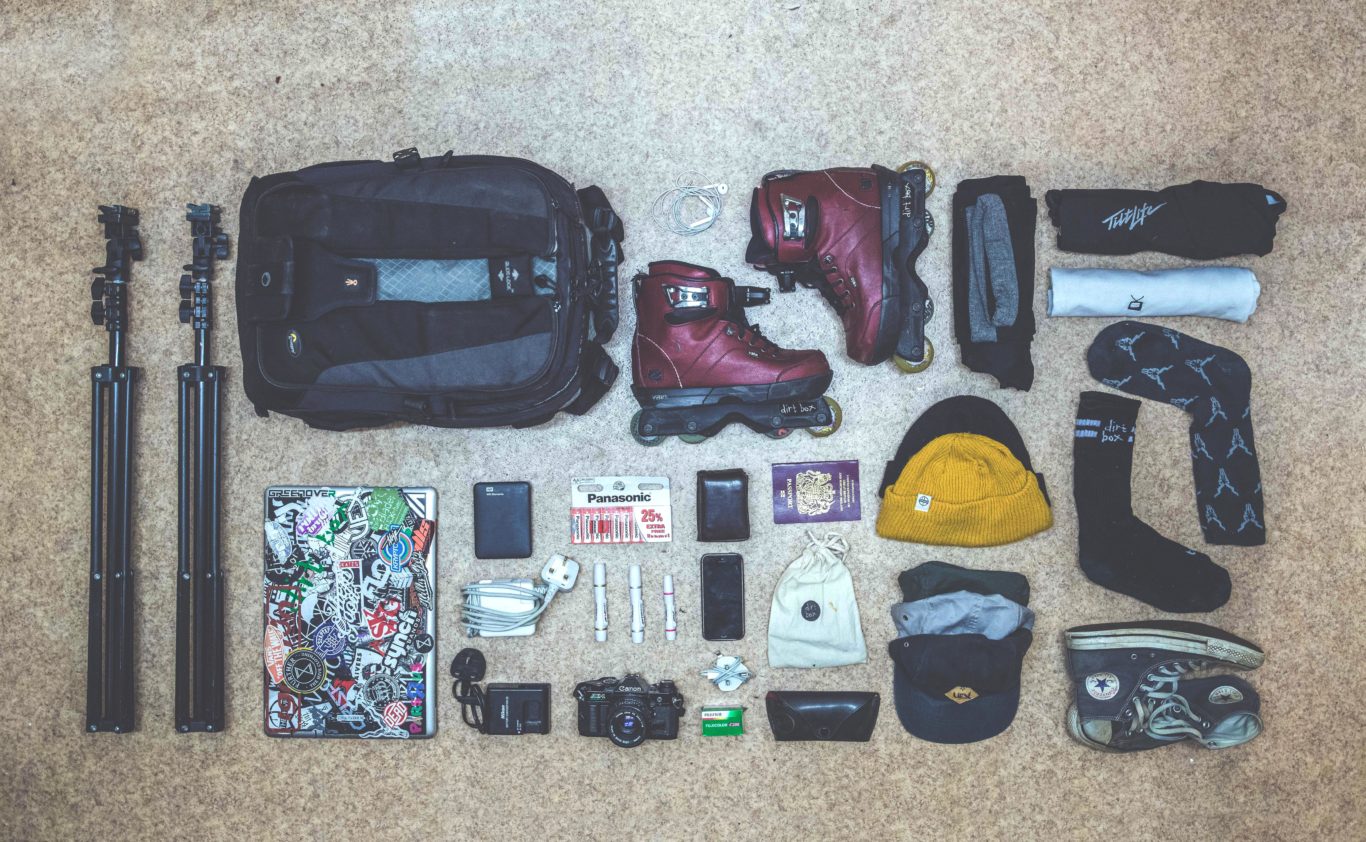 Lowepro Camera Bag: it’s got all the goodies inside for capturing the big boy blade action so it’s obviously the most important item in this list. It’s always stacked to the brim with gear such as my Nikon D800 body, Pocket Wizards to link my strobes up and my favorite lens ever. The stunning Nikkor 85mm
Light Stands: I just can’t deal with not having full control of where my strobes are so these are a must despite how much of a pain in the ass they are to transport.
Canon AE1 film: camera my favorite 35mm film camera by far, always ready for everything in-between the action
35mm film: Always got to have extra film
Camera Battery Charger: Not always needed but always on my mind if forgotten
Dirt Box Change bag –Perfect for all the euros and cents I have floating around from past European trips
Ray Bans: for the sunny days
Lens Pens:got to keep that glass clean
Passporta must for those big trips aboard
iPhone & Charger: – Best and the worst thing in whole world
Loads of AA’s:To keep the strobes flashing
Wallet: for all the money if I’m lucky enough to have some
Headphones:for escaping
Beanies and five panels: I love headwear
Valo BS Ox bloods: Not that I skate often anymore still I can’t strike out an opportunity to get on the roll by not having them at all
Clothing:Need them or I’d be naked and nobody wants that
Tilt coach jacket:The most perfect water resistant jacket for them cold damp days and light enough for the summer months
Socks: Comfortable socks are a must on those photo missions
Converse: What ever my latest favorite pair are that I literally wear to death and beyond
Mac Book & Portable Hard drive:To capture and store all those big RAW files 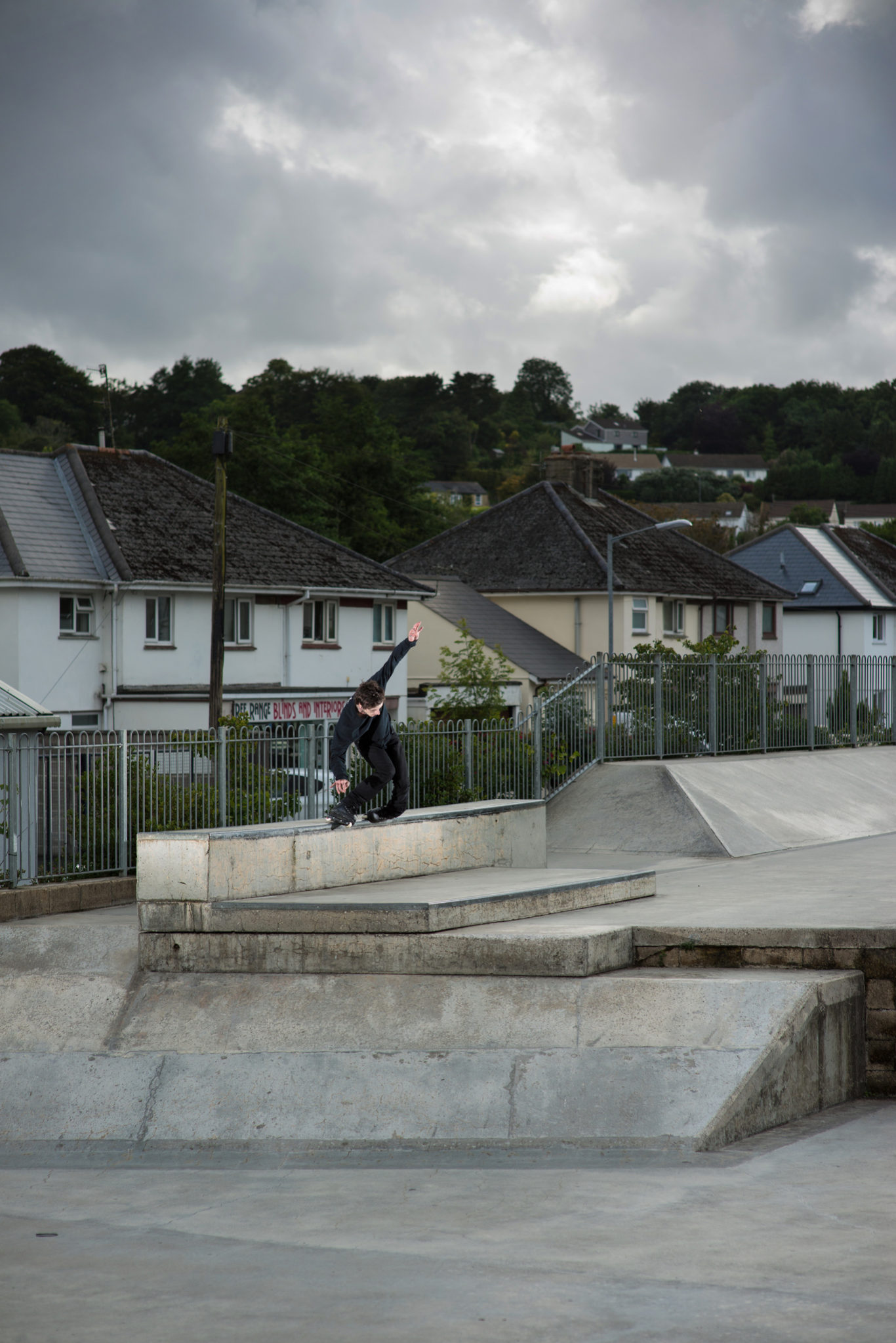 So in 2015 I joined the SlapTap/ Blade Clothing South West bowl tour that would take us around the best skate parks in Devon and Cornwall and eventually lead us all to Nass. It turned out to be one of the best blading trips that I’ve been apart of in recent years so what more could I ask for? Well more photos of the steezy Ben Elliot for one. Although I only got two snaps of him this Ally-oop Topsoul at a stormy Turo plaza is my personal favorite from the whole of that trip. 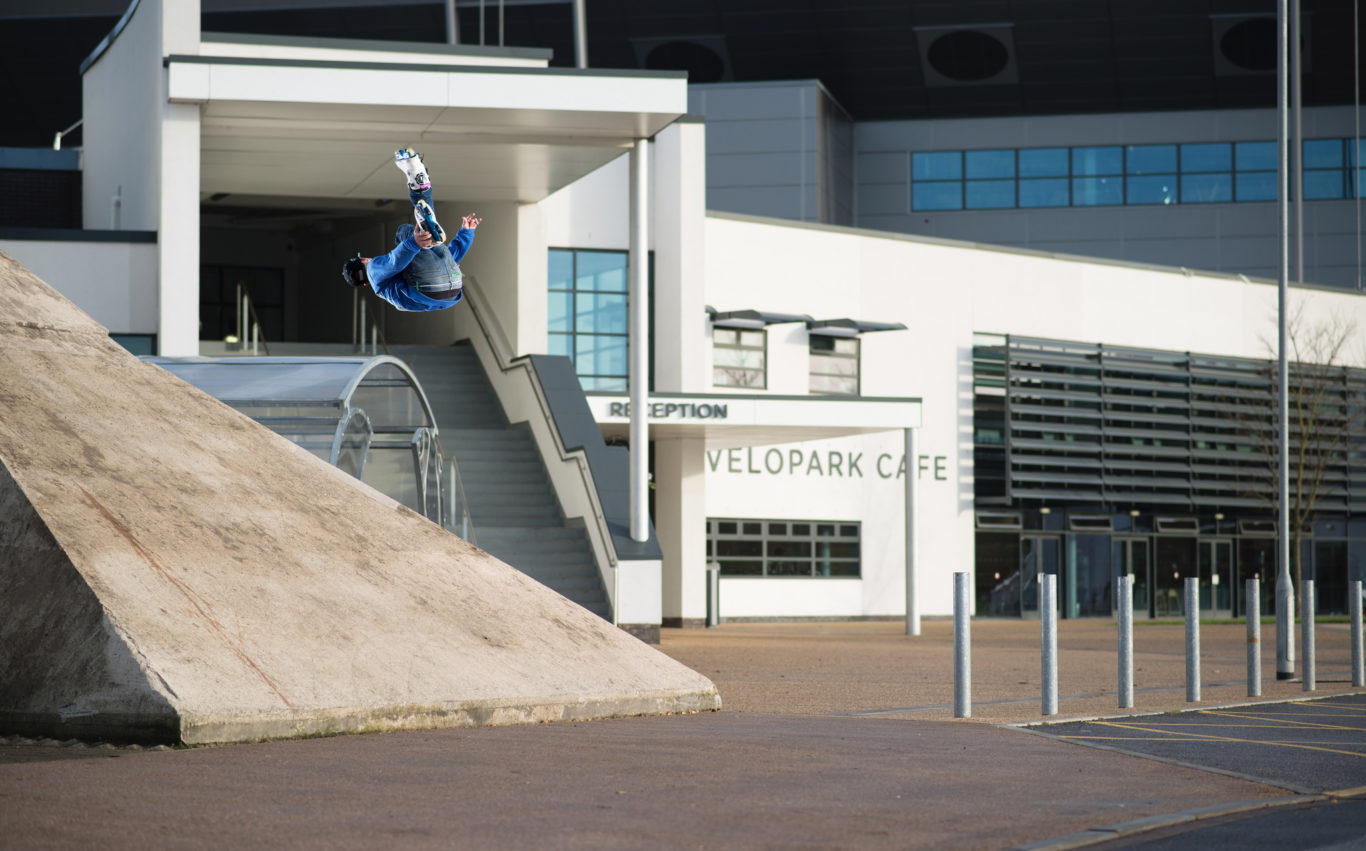 What do you get when you cross one of the coolest spots in the North West with one of our sports most talented “park rats” A cool as fuck photo and proof that this so called park rat is technically one of the best rollerblader’s on the planet. This photo shot at the Manchester Veladrome is just one shot from a collection that hold a special place in my heart. Every photo was a big fuck you to what everyone thought Stephens limitations were as a blader so to capture him doing a big park trick on a dirty street spot just felt right some how. 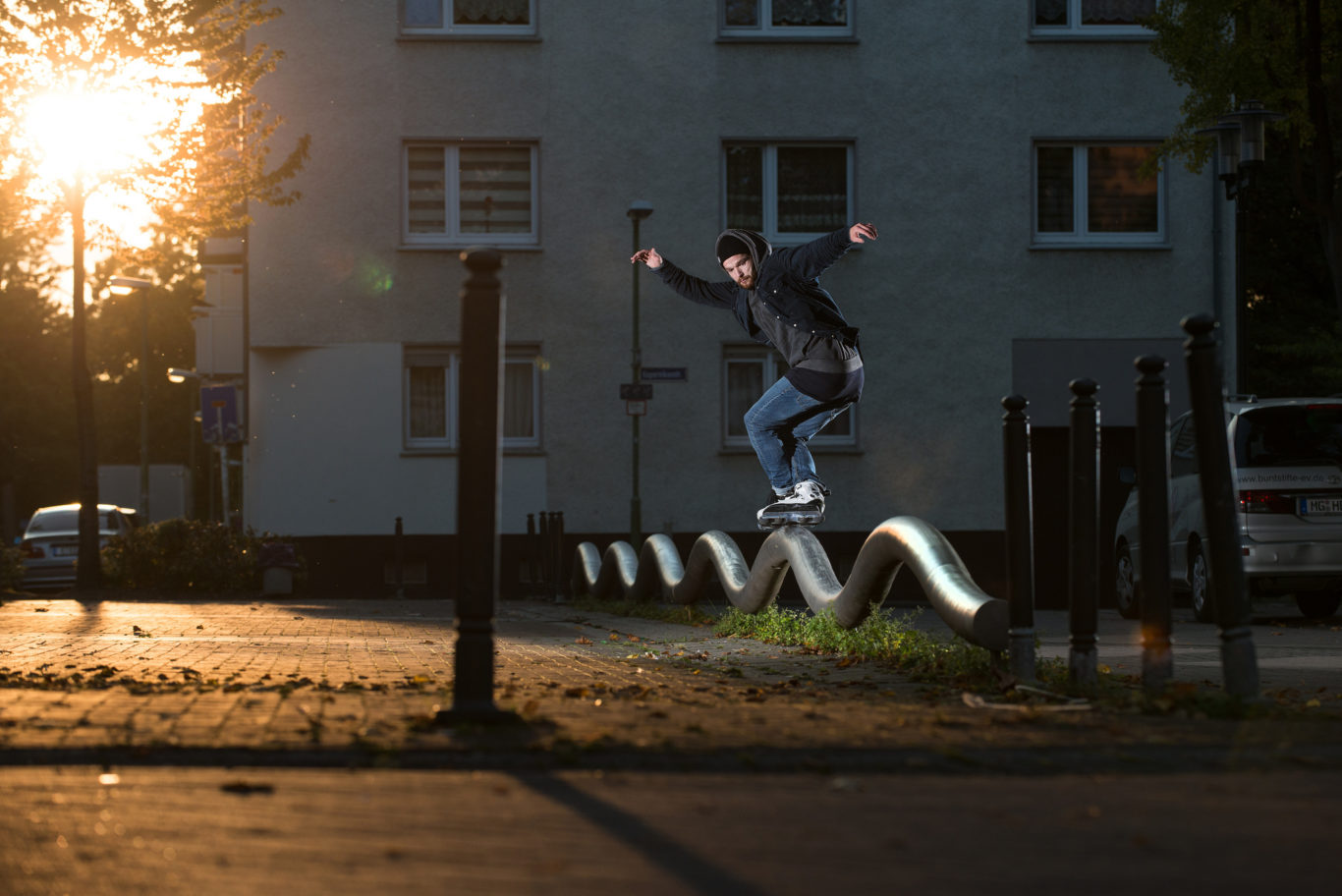 Sometimes everything falls into place so perfectly that it leads you to believe that it was meant to be and this image felt like one of those. I was already enjoying what was to end up being a week spent in the Borklyn Zoo spent shooting and hanging out with Eugen and his brother Daniel. On this particular day we had one last spot in mind but only a vague idea of its possible location. With hope running out as quickly as the sun light a random Right turn took us to just where we wanted to be. All just in time to capture Eugen’s True Savannah on the most perfect wave rail during the very best of the golden hour. 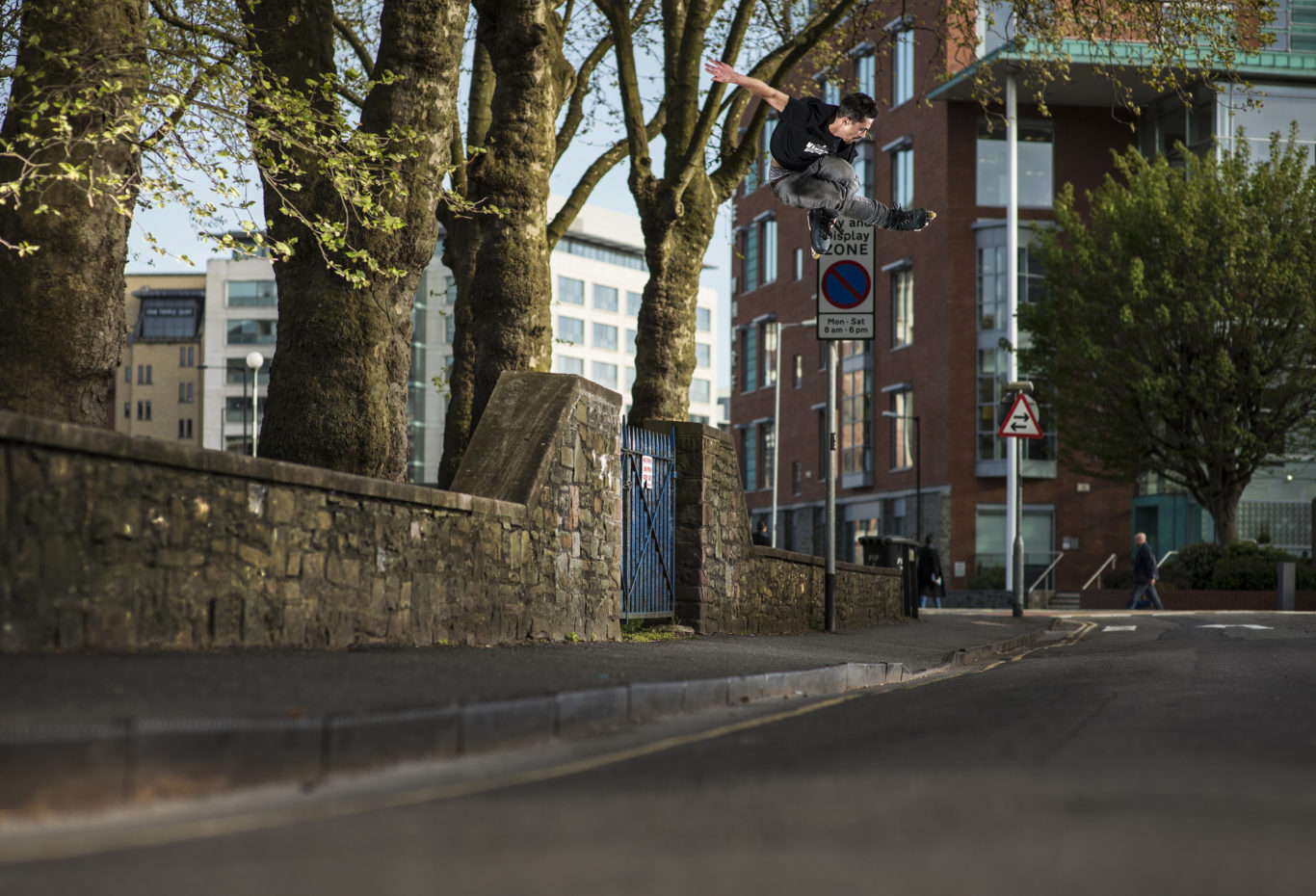 Good things do come to those who wait! Well at least to those who push hard to get what they want. It took nearly a year of chasing him to come out and let me shoot a photo of him but it was worth the wait. I grew up admiring Sam’s skating like a lot of people during the boom years of our sport. So it was very much a bit of a fan boy moment for me to finally capture a moment of his skating. 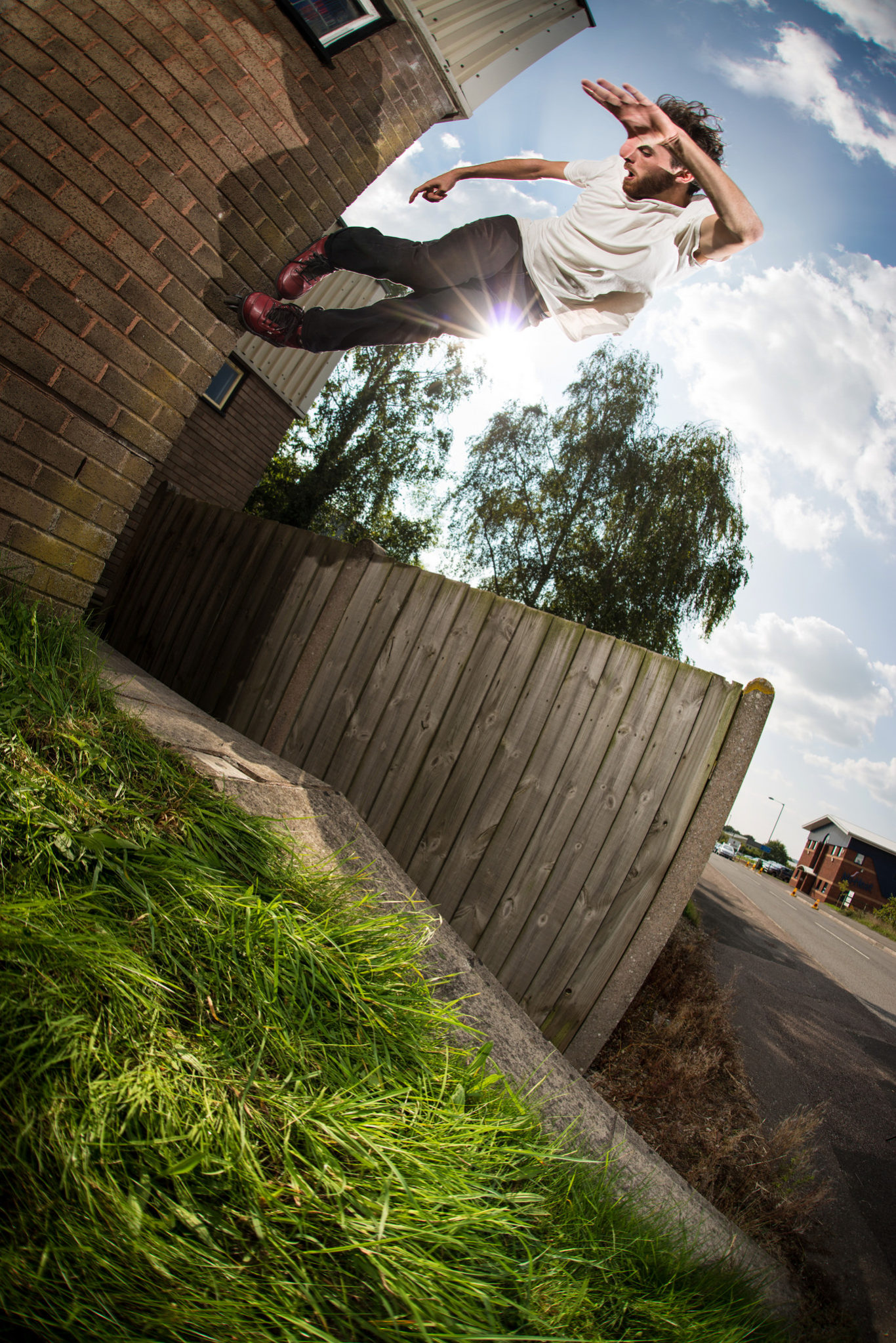 Shooting photos with this guy is nothing short of amazing. Connaire’s spot selection is so on point and then couple that with his work rate to get things done just right. Well it makes any photographers or videographer’s life an easy one. The little town of Honiton is not well known for having a lot to give but on one of our many little missions we ended up there in search of new terrain. Once again Connaire sniffed out a good one and the rest is as they say “history”