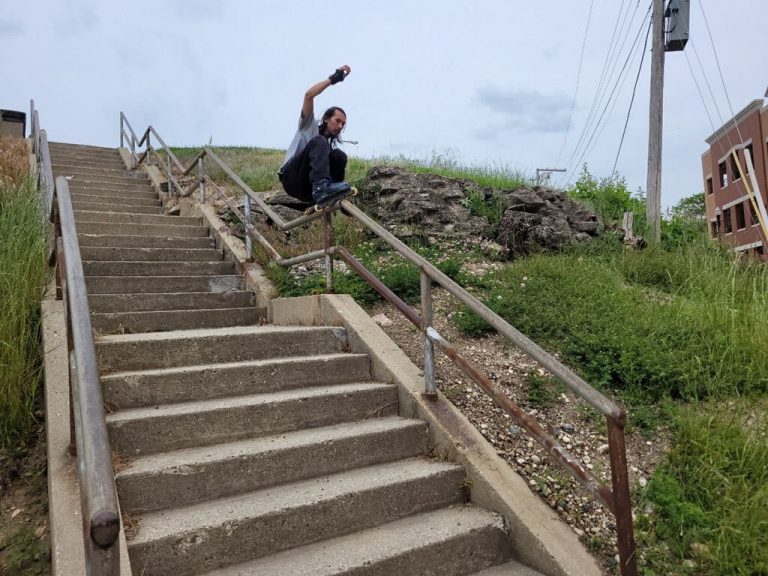 The always inspiring Tri Tri-Rudolph dropped an incredible new video profile which he shot over the Memorial Day weekend with the help of his good friend Nick Pietrobon. As in most of Tri’s videos, he pulls out some unthinkable tricks that will leave you scratching your head in disbelief and swiftly rewinding the video to try to better understand what in the hell your eyes just witnessed.

We had the opportunity to speak with Tri a little bit about the video and he gave us some insight into the filming process behind his new profile and sheds some light on the tricks behind it.

Kevin Little: Hey Tri, thanks for taking the time to speak with us about your new profile. So I guess we can start it out with that initial shot of you and that ridiculous heel roll for a whole city block! How long did that take you to film?

Tri Tri-Rudolph: That was second try. I had a little bit of road left still but my muscles usually start locking up around then.

KL: Good lord! That is wild! So where was the video filmed? The street spots look amazing!

TTR: It was all shot over Memorial Day weekend in the Western Chicago suburbs. My buddy Nick Pietrobon who filmed most of it knows all the spots and showed me around.

KL: Awesome! I definitely need to visit there someday! What was the trick that took you the longest to film?

KL: Yeah that trick was definitely my favorite of all of them. The fact that you landed in a front wheel stall in that little hole after the cess slide was incredible. I am sure it wasn’t intentional, but it looked awesome!

TTR: Was definitely a happy accident and I’ll take those whenever I can get em.

KL: So you have been rolling those same Salomons for quite a while. With all of the skates on the market, what makes that setup so special ?

TTR: I bought these ST10s when they were released and for some reason they are the skates I’ve never gotten rid of and always come back to. They have had Remz, Nemesis, Xsjado, Adapt, Grey Matter, and Deshi souls on them over their lifetime. They do have some rather large cracks in em and I fear I may have to retire them someday. But to answer your question, I guess they just feel right.

KL: Was there any spots or tricks that you weren’t able to land or were kicked out of that you want to go back for?

TTR: We didn’t get kicked out of anywhere. There were a few kink rails I wanted to do but one was gated off and the other 2 had events going on that weekend that were was too much people/security to skate.

KL: I noticed that you filmed it using a Insta360 camera and you have gotten rather good at rolling with the selfie stick. Have you ever had any close calls while skating with injuring yourself with it or gotten close.

TTR: Yeah, I use the Insta360. I can’t say that I’ve had any close calls but it definitely adds another layer using it. You gotta consider the angle, compensate for the extra appendage, and make sure you don’t break it while trying to do a trick.

KL: So what trick was your personal favorite out of all of the ones you landed? They were all incredible so I understand it might be difficult to choose.

TTR: Haha well thank you for the compliment. I think my favorite is cess sliding down the rocks. It’s something I’ve wanted to do for a while but never had the right opportunity. There’s also a lot that could go wrong and glad I didn’t get torn up.

KL: That trick was incredible! It looks like a good way to get broken off, for sure. Tri, thanks so much for taking the time to answer our questions and thanks for always making such inspiring content. Is there anyone you would like to thank or acknowledge for their help?

TTR: Definitely couldn’t have done it without Nick Pietrobon who may have been more juiced to make the video than me a lot of the times. Joe Smith who helps and skates all the time. All the people who told me I should put out a street section. And thanks for doing this Kevin. Oh and the wife for telling me to skate all weekend so she could have the house to herself LOL!