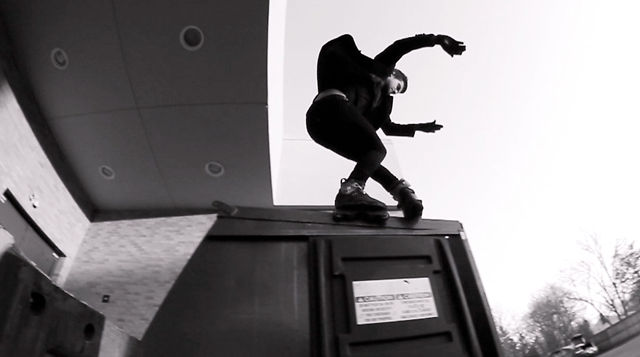 Up and Comers: Cody Lampman

Reminiscing the first time I met Cody brings three specific things to mind: all black everything, soft words, and powerful, badass blading. A few car-fulls of us Rochesterians ventured to Syracuse for a BladeBQ last summer. Upon arriving, I recognized everyone, save for one. That was Cody. He was relatively quiet (at first), but spoke loudly with his blading. It was fast, precise, stylish, and really, really good. This tattoo-covered, skinny jeans adorned, beer slamming dude I had never heard of before was absolutely attacking the ledges. Needless to say, I liked Cody immediately. Since then, Cody and I have developed a great friendship. He is a passionate blader, supportive friend, talented artist and an avid punisher of his own liver. Meet Cody Lampman.

What’s your deal? Who is Cody Lampman?
I’m just some guy who thought that it was a good idea to quit his day job so he could rollerblade all the time. I’m broke, I don’t have a girlfriend, and I have a drinking problem, but hey, at least I do a sweet trick every now and then.

When was the first time you felt serious pain?
I suppose I’d have to say when I got in a fight with this tall skateboarder in sixth grade. I had him at first, but then he tackled me to the ground and proceeded to bounce my skull off the cement a few times. I have a lot of good memories from my hometown park, ha ha.

Why do you travel as much as you do? How do you pay for it?
I don’t know any other way to live. I pay for it by tattooing, freelance writing, and working the occasional odd-job. However, I have decided to settle down in Denver for the next year or so. The scene is great and I always seem to come through with quality stuff whenever I’m around those boys. It’ll be the Dream Team all under one roof. Prepare for big things.

What city/scene has had the greatest impact on you during your travels? Why?
Although I do love my boys in Rochester, I have to say Denver. The Scumpire dudes taught me what good skating was and inspired me to push myself harder than ever before.

Most memorable blade section?
Damn, that’s a hard one. There are so many sections that I love and watch over and over again, although if I had to choose one, I guess I would have to go with Chris Farmer‘s part in ‘BANG!‘. His skating and style during that section changed rollerblading forever. Colin Kelso‘s ‘Truth ll‘ section comes in at a close second though.

Favorite past-time apart from blading?
Having a few drinks with the boys somewhere sweet.

Any person to be killed by? Past, present, or future.
Dexter Morgan or Alyssa Varre.

How many tattoos do you have?
I have over 250 hours of tattoo work done on my body, 90 percent of which is self-done.

You can spend the next year anywhere? Pick a jam.
Brazil. I’ve been trying to plan a trip there for over a year now and I’d really like to see it happen soon. I’d love to head down there with just enough money to get by and spend my entire trip drinking and skating with the locals. Unfortunately, I don’t think that the Brazilian Consulate will think that that is a very good reason to grant me a visa.

Who influences your blading? How?
Every skater that does something sweet and original influences me. I love anyone who isn’t afraid to shun whatever is “cool” in blading and just skate their own way. If I had to name a select group of people, I’d have to say my biggest influences right now are Tim Adams, Howie Bennett, Oli Short, and Dylan Rieder. Those dudes all rip and have great style that I’m envious of!

We currently live in a time where Rollerblading is at a point of accessibility to people who otherwise wouldn’t know about our sport. What, if anything, do you think companies and skaters need to do to take our sport to another level?
Companies need to push their skaters and need to support their image. Your image and “look” are everything in rollerblading, it’s what sells a certain skater. I don’t care how good you are, if your skating doesn’t have a memorable style to it, it’s not ready to be marketed as something that the general public will think is cool. That being said, skaters just need to remember that we’re a small industry. Don’t expect things to be easy. We all started doing this because it was fun and we grew to love it, and quite frankly, there’s no other reason to continue pursuing rollerblading. If the average person sees you having fun with skating, they’re more likely to consider trying it for themselves.
Aside from that, don’t be afraid to put together events and to hook kids up with your old skates. When I lived in Arizona, there was no one else skating in my town for a while. What did I do? I put together my old pairs of skates and got a bunch of kids into blading. With a little work, I got five kids into blading in a week. If every rollerblader stopped complaining and actually started doing something, our industry wouldn’t be so broke.

What was it like growing up blading in such a small/hidden city, what motivated you to become the “nomad” blader you have become today?
Honestly, I thank myself almost every day for being stuck in Page, AZ for so long. That may sound crazy to most rollerbladers, but because I was stuck in an isolated town for so many years, it allowed me to develop my own style, only influenced by the few pros that I saw online, as well as my couple trips to Phoenix to visit Revolution. Thanks, James! Growing up in an isolated environment allowed me to skate alone and realize that nothing mattered besides what I thought was cool. I perfected my own tricks, got young kids into skating, started Friday Night Skate, and remembered just how powerful skating can be, all without feeling the necessity to look badass and make edits. Eventually, Mykel Fatali – we grew up together – and Howie Bennet came to Page to visit and work. After a few hours of skating together, one small-town video premier, and a lot of beers, Howie and Mykel convinced me to quit my job and head back to Denver with them. Ever since that day, I’ve been pursuing skating as hard as I possibly can, and staying in one place for more than a month or two makes me nervous. Life is too short to spend working all the time. If you want to skate, get out and do it.

I think we both can agree that as rollerbladers, we as a community frequently go to Rollernews to see what’s new in the community. On Rollernews there are typically hateful, ignorant comments towards skaters because of the way they dress/style. How do you feel about Rollernews, should it even be a fixture in our sport & what do you have to say to the haters?
Rollernews regurgitates material, makes money doing it, and gives nothing back to rollerblading. If you’re not giving back to skating, then you shouldn’t be a part of it. As far as the “haters” go, I couldn’t care less when it comes to my personal material. If my skating isn’t for you, well, sorry.

Is it true that you only wear black?
Yes. Anything I wear, besides my skates, has to be black or else I feel uncomfortable. I’ve been this way for two years.

Do you see Rollerblading existing in five or even ten years from now?
I’d like to believe that rollerblading will live on through multiple generations, much like skateboarding has, but even I doubt that I will be alive more than ten years from now. Who knows where skating will be. Although, I do have this fantasy vision of me as this old man, covered in my shitty tattoos, shredding bowls somewhere.

You’ve always seemed like a calm, controlled dude. However, this summer it appeared that you had changed into a loud, raging alcoholic with a death wish. Is this the new Cody Lampman?
Ha ha ha, no, that was certainly not the new Cody Lampman. The raging alcoholic that came out during those summer months was brought on by a few things; the many trips I took to see friends, the excellent weather, and most of all, my need to “research” what living without any morals or responsibilities would be like for my newest piece of writing. I know certain writers have used “research” as an excuse for doing awful, occasionally criminal, things and I can now count myself amongst them. This last bit I didn’t mention to any of my friends, although I think Mykel caught on after one unusually wild night of drinking in Arizona. Overall, it was a fun summer, and I have lots of funny stories, but I sort of regret most of it. I did a lot of messed up stuff, and I’m fairly certain that almost all of the new people I met got the complete wrong impression of me. Would I do it all again? Of course!

You are currently a flow skater for USD; now in recent years USD hasn’t really wavered from a certain image/style of skating. Explain the process of becoming a sponsored skater. Did you choose USD or did they choose you? How does it feel to be on the rollerblading version of The Dream Team?
I have been skating USD skates for as long as I can remember. As far as them choosing me, I sort of went out of my way to choose them. I’ve never pictured myself on any other type of skate and moving from being your average rollerblader, to being USD Flow, wasn’t as hard as I originally imagined. I love USD and I hope that they appreciate me bringing a different side of skating into their spectrum. Regardless of their image, I love the skates and I want to prove to everyone that not only can anybody shred their skates, but they can look good doing it.

What’s next for you?
My only real goal for the near future is to produce a quality section that I’m actually proud of. I had fun skating a new city and experimenting with my spot selection during this edit, but I would really just like to get back to my roots; lots of super fast tricks on dangerous and interesting obstacles. I’ve got two sections planned for 2013, both of which I want to be amazing. In short, I’d like to just focus on skating even more than ever and put it before all other priorities. It would also be nice to get a real job, travel out of the country, meet a nice girl, and finish my new novel, but hey, lets not push it.

Any last words, punk?
Thanks to everyone who contributed to this interview, thanks to Mykel Fatali for being one of the best editors currently in skating, Kris Troyer and Kurt Rose for filming, all the boys in Rochester and Denver for the inspiration, USD and Haunted Urethane for having my back, Scumpire for producing the best content in rollerblading, and thanks to Be-Mag for this opportunity. Rock and roll, deal with it.

Find more Up and comers on Be-Mag here.