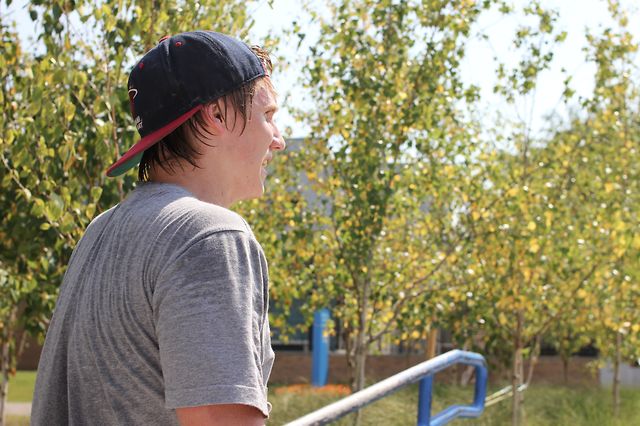 Up and Comers: Jon Fromm

Most of you probably already know Jon Fromm, or at least think you do. He shows up at competitions all over, comes out to the local blade events and always seems to have a new edit on Vimeo, forcing you to rewind and ask yourself what just happened. But if I had to share something about Jon that most people wouldn’t know it would be his work ethic. Skating is the perfect microcosm of his life. To the untrained eye when watching Jon warm up with hurricane topsouls first try and switchups that leave you amazed the first thing people think is “I wish it was that easy for me” or at least thats what I was guilty of.

I have known Jon for a while now and have had the privilege of filming with him. I told him just that. His response was not what I expected, he said “I’m not talented, every trick I have, everything I can do is because I have worked for it, nothing has come easy for me”. He treats skating like a full time job. Then I thought about it, I can’t name many people (let alone bladers) who wake up at 7 a.m. to skate their box everyday before going to work and then going off to school. But Jon does this (and in the FL humidity no less). He prepares for competitions both mentally and physically and puts forth pure effort on his street sections, I have never worked with someone that has his level of scrutiny and attention to detail in terms of continuing until a trick is not just perfect but perfect for film. Jon is in the prime of his skating now and is making the most of it with a number of high quality sections out in a timeframe that seems simultaneous, most notably his upcoming part in the new Razors video. Jon is that cliché but true example of working hard and never giving up on your dreams. The future is beyond bright for him and I can only say I feel privileged to have gotten to work with him and eagerly await what the future has in store. So sit back and enjoy a glimpse into a good rollerblader and an even better guy.

What’s up Jon, let’s start off by you stating where you’re from and you’re yourcurrent sponsors are.
Alright, my name is Jon Fromm… I am from Boca Raton, FL. My sponsors as of now are Razors, Scribe, Create Originals, Jug, and Asphalt Beach Skateshop.

That’s what’s up! That’s a pretty solid list of teams right there. What is it like riding for such a big list of sponsors? Do you ever get overwhelmed with trying to put out content for all of them?
It makes me proud every day to put on my skates. It’s pretty amazing riding for Razors, and being able to represent them. Such a legendary company, from Elliot, to Dunkle, Stockwell, to Murda, and Aragon…Pretty crazy. Also, with Scribe, a company that helped blading in the beginning. I was super juiced to be part of it when it had it’s rebirth, and what can I say about Create? Probably one of the best companies in the past two years. Doing so many awesome for blading. In this past year, I felt a little pressure. I’ve been in the process of filming four sections. Between those section I put out an edit for Scribe, and a Park Compilation. It gets to me at times, but if I remember to have fun, it takes the stress right off. I’ve also had the pleasure of having the best friends to help me film, and shoot. Without them, I wouldn’t be anywhere.

Yeah, I must say your friends do film pretty good from the past edits and sections I’ve seen of you, haha. It’s weird usually hearing of a current Razor/Sunshine rider who doesn’t skate Groundcontrols, what made you give Create Originals a chance? Does anyone over at Sunshine ever say anything about it?
That’s a great question…I was always intrigued since John Bolino showed me them while I was working at camp woodward one summer. Create is doing huge things for the industry, so I already was a big fan of them. Brian, Hakeem, and Billy put in countless hours, and it really shows. Look at all the amazing content, and product they put out! When I was given the opportunity to ride them I couldn’t believe how solid they were. I fastslid a rail for the first time in years, and now fastslides have become almost a safety trick for me. As far as sunshine, they respected my decision to ride for them. I’ve never heard anything negative from them. They were juiced for me when I was given the opportunity.

That’s dope then, good to hear companies can be civil about things like that. Now you said you’re from Boca Raton, FL. What has it been like trying to make a name for yourself in the industry from a state that for the most part, doesn’t really receive that much recognition as some of the other parts in the U.S.?
It’s honestly a love/hate situation. Florida is my home, I love it there. My sponsors also like that I’m there I think that helps promote to that region. It gets frustrating at times because I see a lot of hate towards FL, sometimes even hate on my region (South FL), but I try to blow it off. Florida is one of the realest scenes in blading. Shrouded in history, it has so much to offer the industry. Names like Padilla, McHugh, Garcia, Ricki Martinez, Franky…etc have all made FL what is. To share some light with them is a huge honor. Not to mention all my friends there are one of my biggest influences in skating. Can’t do much of anything without good friends! haha…FL is starting to get a little more recognition with the Pan Handle Pow Wow. Blake Taylor, the even organizer, works tirelessly every year while managing being a husband, and working a time-consuming job. FL is on the rise again, and I don’t think it will be long till it’s up there with other scenes.

Being a FL native myself, one can only hope haha. You currently aren’t living in South FL right now though, where are you living and what made you leave the beautiful beaches and jaw dropping ladies?
I am currently in Grand Rapids, MI. I’m working an internship for a VoIP phone company. Basically, I’m a sales rep, and account manager. I decided to take this internship because I’m about to graduate with my B.S in Electrical Engineering, so I wanted to have some real work experience under my belt. This job has been one of the biggest blessing in my life. Not only am I getting much needed work experience, I’m also able to blade every day. I’ve also been lucky to meet some really awesome people here. They’ve been helping me film, and have been just some awesome friends in general. The blade scene is just awesome! haha

Wow, that’s really respectable. There isn’t too many rollerbladers out there that truly pursue a major like that. Any particular reasons for choosing Electrical Engineering?
Definitely inspired from my dad. He got me hooked on telecommunications since I was 5. Not sure if I wan’t to pursue the same exact field as him, but something along the lines with eletrical engineering. I’d love to work with Boeing or Airbus, and contribute to their production of an all electric based plane. It would be awesome to see the airline industry all electrical, so we could start to diminish the oil companies.

Your father is a very good role model, despite being a Green Bay Packer fan, haha. How has it been balancing a major like that with your skating? Especially when having to film and put out content by a certain deadline.
Hardest thing I’ve ever done in my life…to be honest. My degree is a fast pace, rigorous amount of stuff. I mean you kinda have seen it. You went to the lab with me one day. I’ll spend hours at a time working on some project. But the ultimate goal of skating, and graduating keeps me motivated.

That I did, haha. Well it’s good to hear you’re focused on more than just the “now”, and know how to manage the two. But, other than skating and school, what else does Jon Fromm do?
Haha not much too be honest..I’ll do some editing now and again. Made an online video for our scene last summer called “Sunny Side UP!”. That was a unique/fun experience. I’m also big into basketball. Grew up playing my whole life, and played freshman and sophmore year of H.S, so I’ve always enjoyed that!

Who’s your favorite NBA team? Also, when you come back home we’ll have to make sure you pick up a good ankle brace, because your boy has been known to hit those Allen Iverson crossovers on the court!
hahahaha. Heat fan all the way!

(Shaft voice) “You damn right!” haha, so that means you better be repping the team up there in Piston land then when they meet Oklahoma for the finals this week!
Oh You know it! Been a wild week watching them in the East Finals!

For sure. Well Jon, it’s getting late so let’s try to wrap this up. What can we expect from you in 2012? Any new video sections dropping or major contests we should look out for you at?
2012 is a wild one..Well we got “Hope Dies Last” premiering next week in Kalamazoo, MI. Then later down at the end of the summer the next Razors video will be dropping. I have section in both of those. Also, I have a section in “Feel Good Feel” by the Central FL Rolling guys. That should be out in the Fall. As far as contests, I just found out I’m going to Ecuador in August for a comp. Super excited about that! Shaping up to be a great year!

Wow, seems like a year of great times is upon you. Make sure you make the best out of all the new and exciting experiences you’re blessed to be apart of, and I’m sure everyone will be pleased with the new swag you have coming out.. Or else you know we won’t let you come back to South FL, haha. Just joking. Well Jon, is there anyone you would like to thank as we finish this up?
Hahaha, Yeah would love to give a shout to my sponsors Razors (Andy, Mac, Geoff, and Matt), Scribe (Dan Fabiano), Create (Brian and Hakeem, Jug, and Asphalt Beach Skateshop (Steve). Thanks for all your support, would not be here if it wasn’t for you. I’d like to thank all the filmers for putting up with me Phil Long, Alex Beaupre, Frankie Terranova, and of course you Matt! Thanks to all my friends in FL, MI, and around the country. You guys are the best. Most of all, big thanks to my Family, I could not have done this without you! Much love…..