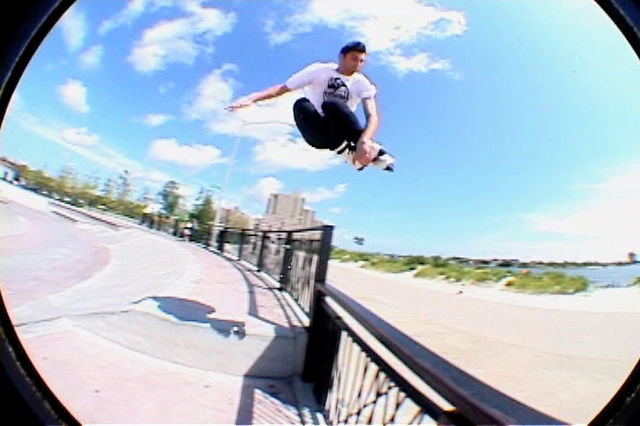 Up and Comers: Sean Grossman

Okay, so how old are you? Where did you grow up and where do you currently live?

Im 22, grew up in Long Beach, New York and moved to Island Park when I was 12 with my family. Currently reside in Island Park which is about 50 minutes from Manhattan. I go to school there and I’m planning on making a move to one of the five boroughs within the next year or so.

So you got affected by hurricane Sandy, and I know some of your shit got messed up. Are you back home now? What was that whole experience of being displaced like?

Yea, unfortunately Sandy hit us hard. The 10 or so years we lived here in Island Park there was never an inch of flooding. When Sandy arrived my block turned into a river and my lower level was flooded out. Between cleaning, throwing out the belongings, then dealing with no heat and electricity for weeks wasn’t fun. We lost cars, almost lost my blades, and a ton of other belongings. Luckily my family and friends in the area are okay so that’s all that I can really ask for. We stayed in a one bedroom apartment for two weeks after Sandy so being back home feels great. Being displaced was rough but it makes you think about all the royalties we take for granted.

Glad to hear you’re safe dude. So let me ask, how did you get started and where would you like to go with your skating in the next year or so?

Well, I originally was interested in skateboarding like most rollerbladers. I used to skateboard with my neighbors across the street until I got my first pair of Rollerblade brand inline skates for my 12th birthday. After a few months I ditched the skateboard and my dad took out the middle wheels of the blades and I remember waxing my curb and trying to grind it. My neighbors built this 3 ft quarter pipe out of wood and I launched off of it into grass and I thought it was so sick. I called my mom and aunt to watch me jump off the ramp and of course I slip out and my knee shreds open from the splinters in the ramp and I had to get 13 stitches in my kneecap. After that I was hooked and my parents were mortified. My grandma a few months later bought me K2 250CC aggressive skates at Modell’s Sporting Goods Store. When I turned 13, I met my first rollerblade friend Jarret in school who later turned out to be my best friend and we skated every weekend at a local indoor park by my house. The rest was history.

Who influences you now?

I’d say Micah Yeager, Chase Rushing, Farmer, Bsmith, Nick Riggle, CK, and Broskow. I like watching skaters who push the limits and make it look flawless. I really like how skating has evolved over the past few years. It’s matured in a way that gives the sport a more professional look.

So, within the New York scene, who do you see as upcoming and pushing those limits?

In NY there’s tons of upcoming talents. I’d say the ones people need to look out for are Shawn Gradilone, James Perez, Chauncey Jenkins, Jordan Baez, Sebastian Michalski (think I spelt it right), and Chris Murphy. There’s plenty of others as well but I can’t think of them at the moment?

Cool. So you’ve been working on your video, in an attempt to shed light on some of the talent that you’ve mentioned. What was the inspiration to do such, what has the process been like? Were there any downfalls or bumps along the way? You’ve been filming with a VX, why the 3 chip cam?

Hmm good question… I’ve always had an inspiration for filming skating and I always wanted to make my own video. After I was invited to go on the EFNY tour last winter I met a few people that I wanted to get together with and make an edit showing a different side of New York rollerblading. After watching some older skate videos like ‘Leading the Blind’ and ‘Road to Nowhere’, I decided to make my own video instead of the long edit I originally planned. I’ve been traveling all over the five boroughs, Long Island, and NJ since July filming for the video. It’s been going amazing and the skaters featured in my video are really pushing their limits! Few downfalls and arguments/camera problems have gotten in the way but it’s looking like a smooth ride from now on hopefully to the completion of the video. And with the VX: I owned a 2100 and 1000 a few years back and sold them to get an HVX. My friend Chris Sand had a VX2000 for sale and I bought it for under 500 bucks. After that I ordered a MK1 fisheye and I’ve been loving every minute of filming with it. I’m not into HD videos because everyone has DSLRs now and people seem to edit the same way. I like skating footage to look raw and fast not slow and smooth (that’s what she said). And I’m sorry this interviews taking so long, I’m sitting in economics class now, haha.

It’s cool dude. So let’s talk blades for a bit, your progression from skate to skate. You’re currently riding Razors, and as long as I’ve known you, you’ve been riding them. What skates have you rode in the past, why and how did you transition to Razors, and do you see yourself riding anything else in the future?

I’ve ridden pretty much every skate besides USDs in the past. In the past I liked skating Xsjados, Valos, and Remz but I always ended up going back to Razors. I love to do gaps and skate ledges so Razors give me the perfect flex I need with tons of support. I’ve been back on SLs for 3 years and not looking to change anytime soon. They are simply the best skates for all aspects of rollerblading. Don’t understand how they get so much hate. Long live Razors!

So what’s your current skate set up?

Tite. Alright, umm, what’s your take on the scene in Long Island?

Long Island is my home. Where I learned how to skate and where my true skate crew resides. I feel like the Long Island scene is one of the best in NY, if not the best period. We have Trevor Johnson, Bobby Reichel, newly added Anthony Soto, Chris Murphy, Shawn Gradilone… Do I have to say more?

A combination of the two?

Haha, do I have to answer that one?

Word. So what are your plans for the next year?

I plan on getting good grades in school, getting another job on top of my crummy one, making a sick video, skating as much as possible and continue pushing my limits, and planning a west coast skating trip/BCSD trip next year.

Thanks dude, I’d like to give the most important shout out to my family for always supporting me and having my back, my good friends (you know who you are), my skate crew, LI, Queens, Manhattan, Brooklyn), Greg from Tri State Skate, all my “fans,” Ian Curtis, Danzig, every rollerblader for keeping the sport alive, and anyone else who did something good for me in the past. Yea, it’s pretty general because I don’t want any death threats because I forgot to mention someone’s name in this. You all know who you are and much love! Thank you Ryan for this interview and the photos you shot of me in the past. And of course to Be-Mag for giving me the opportunity!

Now I guess I’ll get back to learning about marginal cost curves. And thinking about my ender for this section…

Find more “Up and comers” on Be-Mag here.