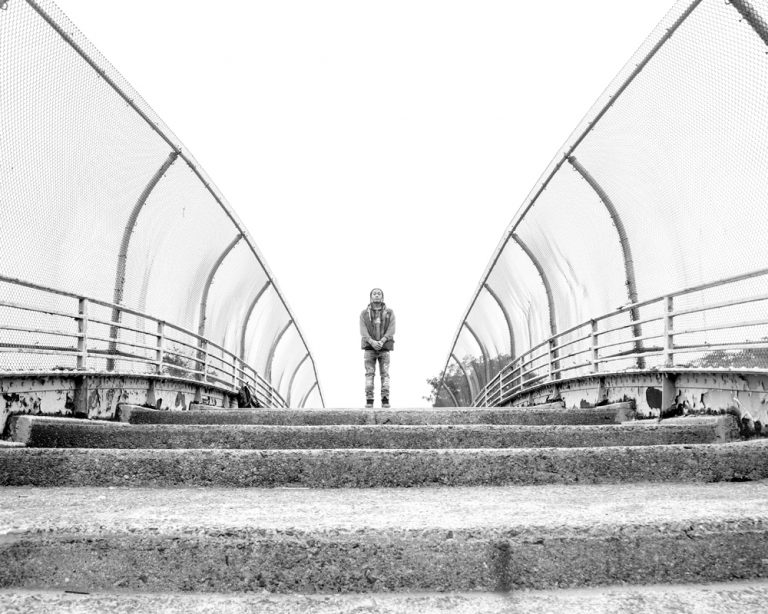 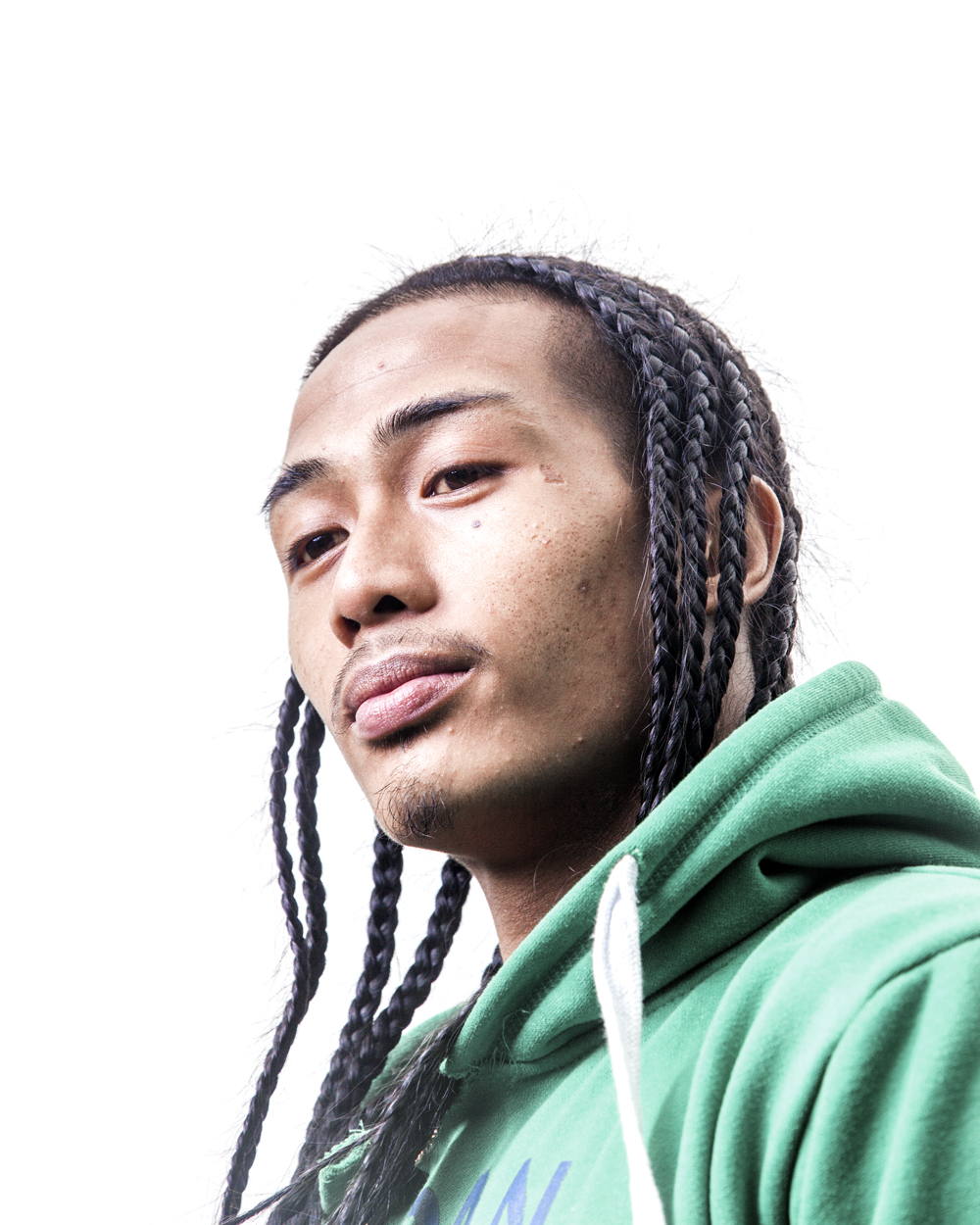 A young buck that  recently took best trick at the 2018 Boschi Pope Skate Off, Sin has been climbing the ranks of the NYC scene and establishing his name for almost a decade now.

Born Steven Sin in the Bronx, NY, Chino found skating at the age of 12. 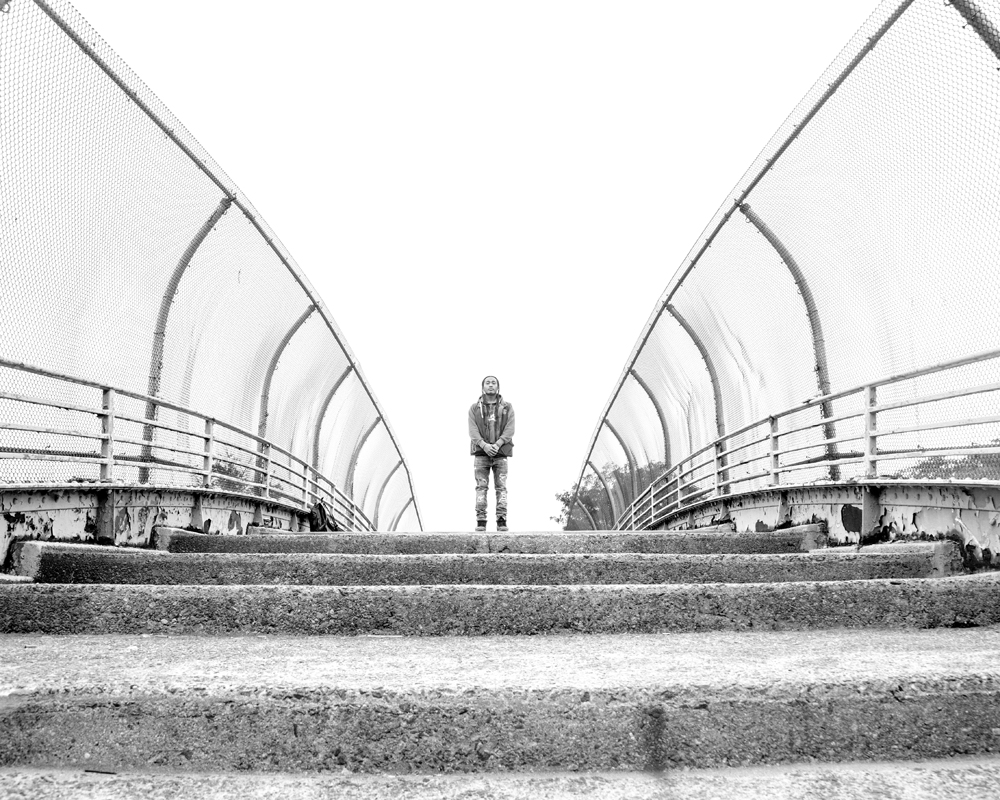 Sin stands on an overpass in Brooklyn, New York in October of 2018.

Portrait by Ryan Loewy for Be-Mag.

On a chilly Sunday morning in October, I met with I ROLL NY’s Craig Benabu. We’ve been bouncing ideas back and forth about spot selection in anticipation of working with Chino.

“Let’s get it gang!”, Sin ecstatically proclaims at 9:30am over our Instagram chat confirming our link place and time. 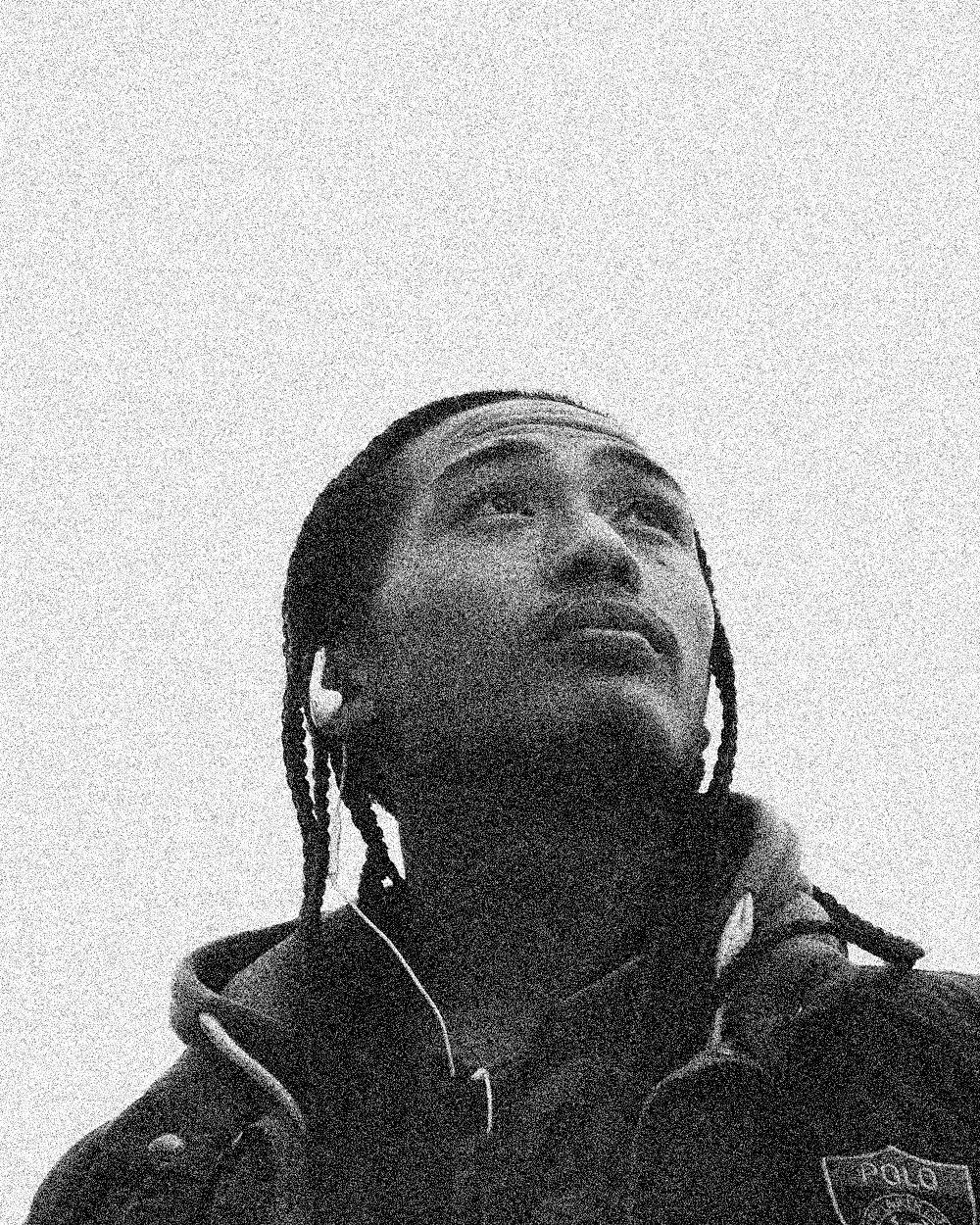 It’s supposed to be an 11am start in Coney Island, a fitting pairing, as Sin’s skating heralds of attributes often associated with classic New York skating, and Coney Island heralds a similar ethos in its iconography. I meet with Craig at 25th Ave in Brooklyn just shy of 11am. For me, it’s a little over an hour trek from my place in Long Island City. But it’s worth it; Sin is more determined than ever, his recent win at BPSO a catalyst that has in turn ensured that that determination is only bound to grow further. 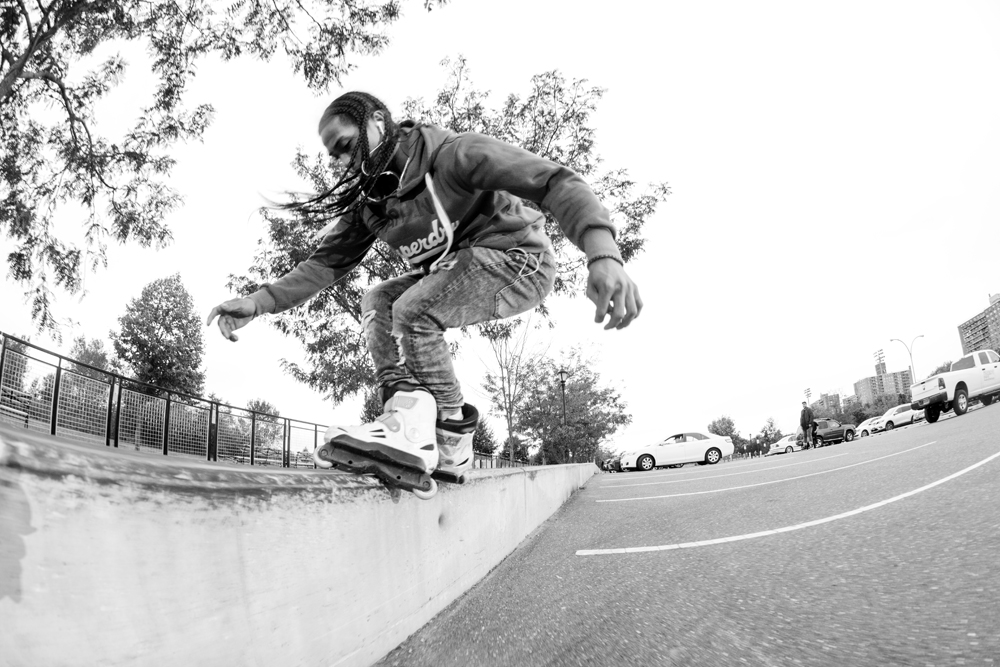 Chino warms up with a front savannah in Brooklyn, NY.

We end up starting at a 12:30pm as per the typical blade time algorithm. We find Chino at the 25th Avenue station off of 86th Street. It’s easy to spot him in a bright green hooded sweatshirt with his distinct braids. ” I made sure to keep ’em in”, Chino notions to his hair as we walk down the block. We begin heading south towards a warm up spot; it’s a ledge in a parking lot that I’ve seen a few times before but had never skated in person. We arrive to meet a few locals, and as we get sorted, Chino wastes no time honing in.

Chino dials another one. Sin, now 22 years old, began skating at the age of 12. He’s currently pursuing a career as an automotive mechanic.

As he continues to warm up, Sin’s commitment to his craft is evident. Chino began his skating ventures when his cousin Joey put him on to the sport nearly a decade ago. With Allerton Park just down the block from his house, it would become his stomping grounds where he would end up honing his practice. He would spend his early days there fine tuning his chops, eventually taking his skating to the streets of New York. From there, he’d continue his practice , while finding another, that being in the automotive field. 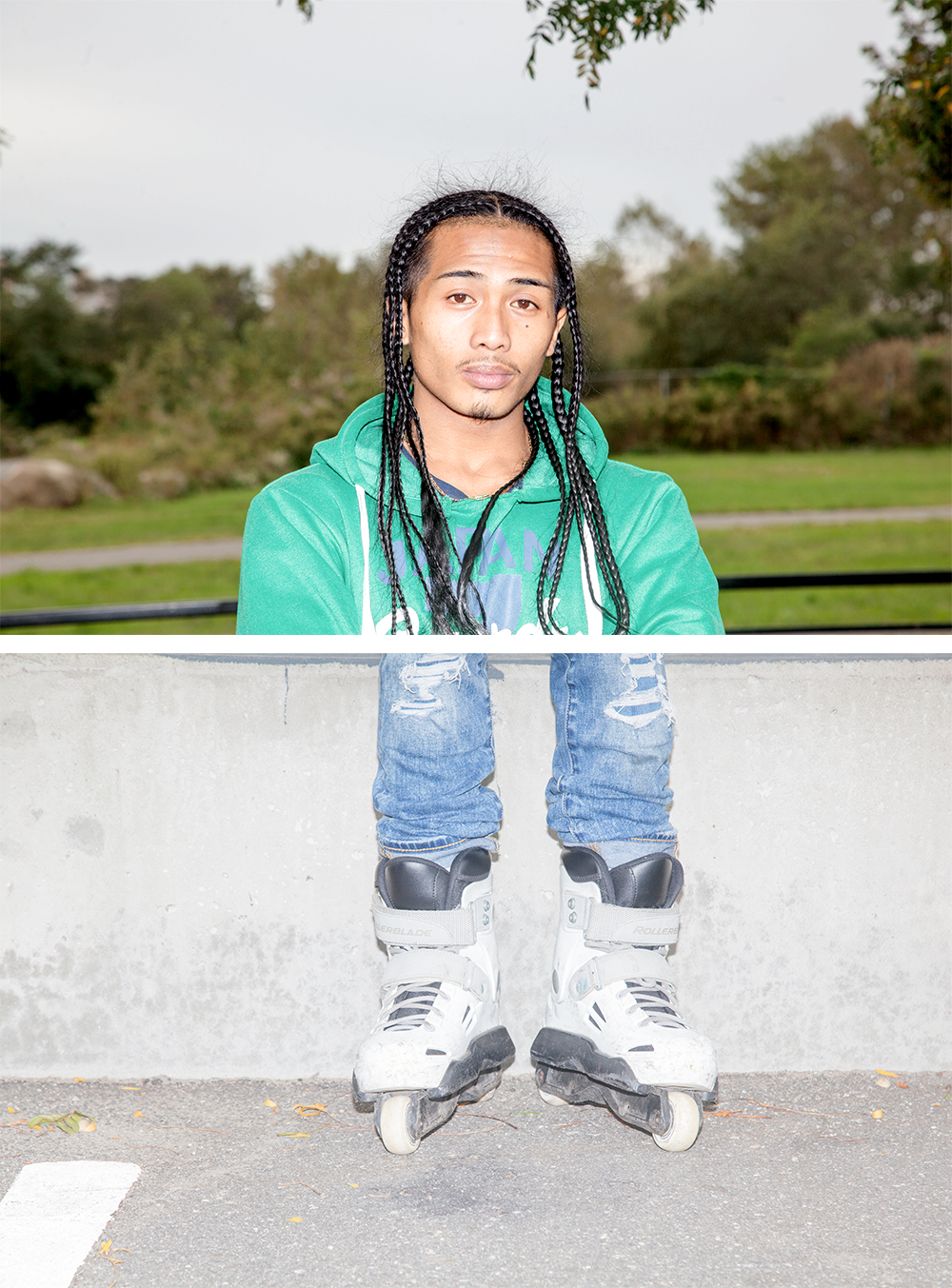 Having graduated from Evander High School, Sin would go on to Lincoln Technical Institute to study automotive technology. During that time, Sin worked a job at a shop while taking classes, all the while still balancing his commitment to skating. “Do you see any correlation between your pursuits in the automotive field and skating?”, I ask him a few days later on Instagram. 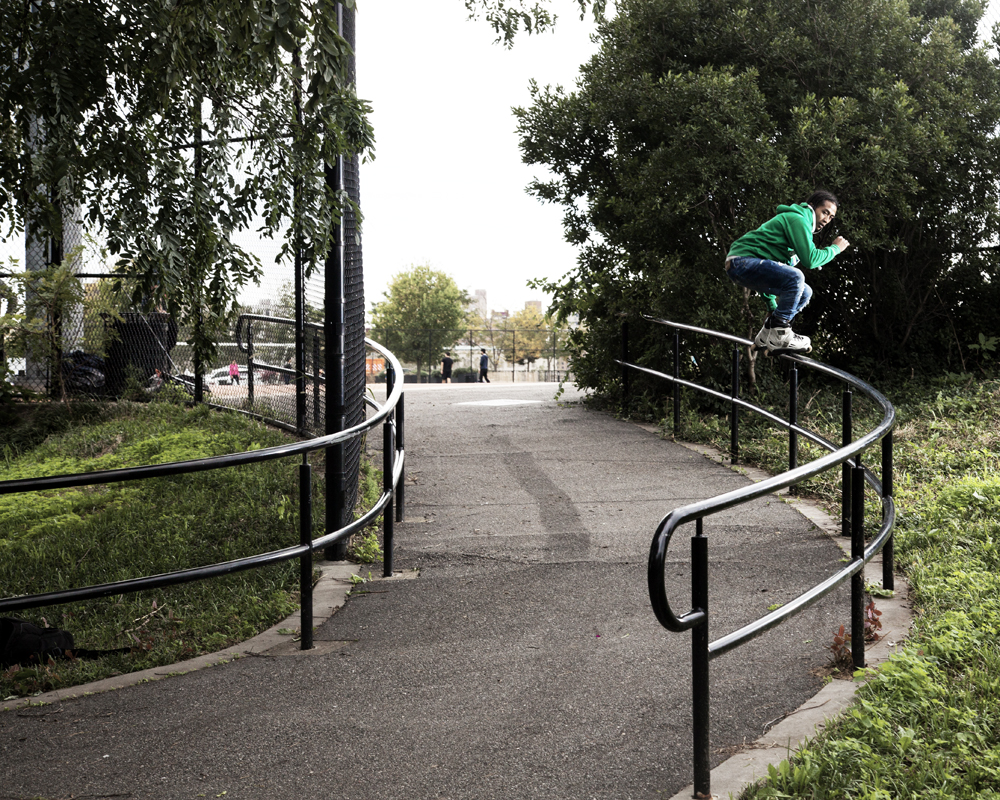 A front farv in Brooklyn, NY.

” Tech tricks have levels to them, and I see that similarly in the automotive realm.”, he explains. For Sin, the craft of being a mechanic is akin to that of a skater; time and dedication is what yields greatness. But he also understands the playing field that entails. ” When you start working, for example, at a dealership, you are as basic as everyone else, having the same knowledge as most entering as a ‘lube tech'”. In order to grow, he explains, you to have to perfect that craft, pay your dues, and that takes years. “For the most part, we all have the basics, but then there’s the high tech that you eventually master, and that takes a while.”

Sin is not only eager to perform, but he understands what he must do to perform at his best. Throughout the day he continually asks of the next NYC competition that is coming up at the end of October. Despite it being nothing to phone home about, Sin is eager to compete. “That shit is gonna be lit! I’ve been telling all my boys!”, he says to me as we shuffle over to the next spot. 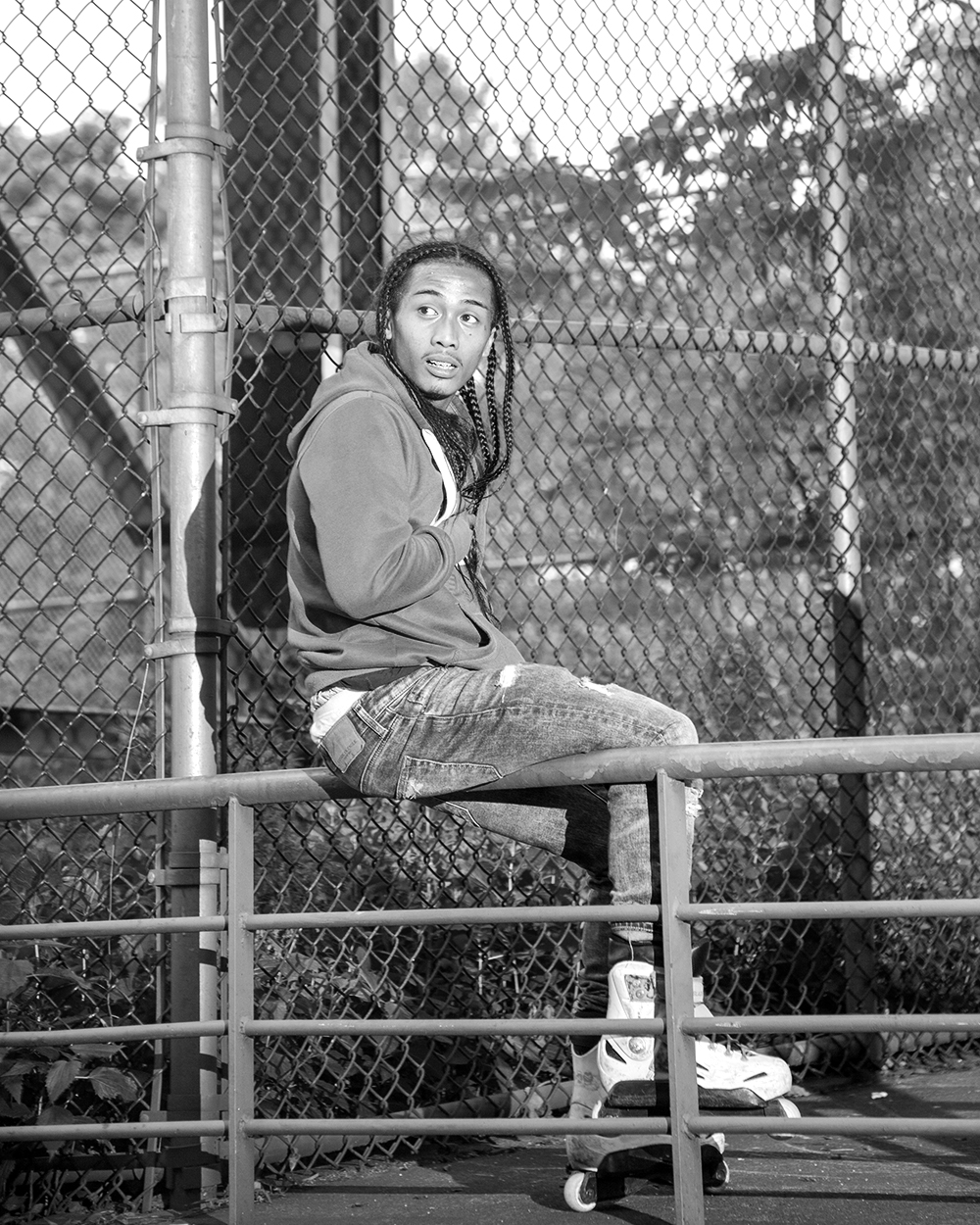 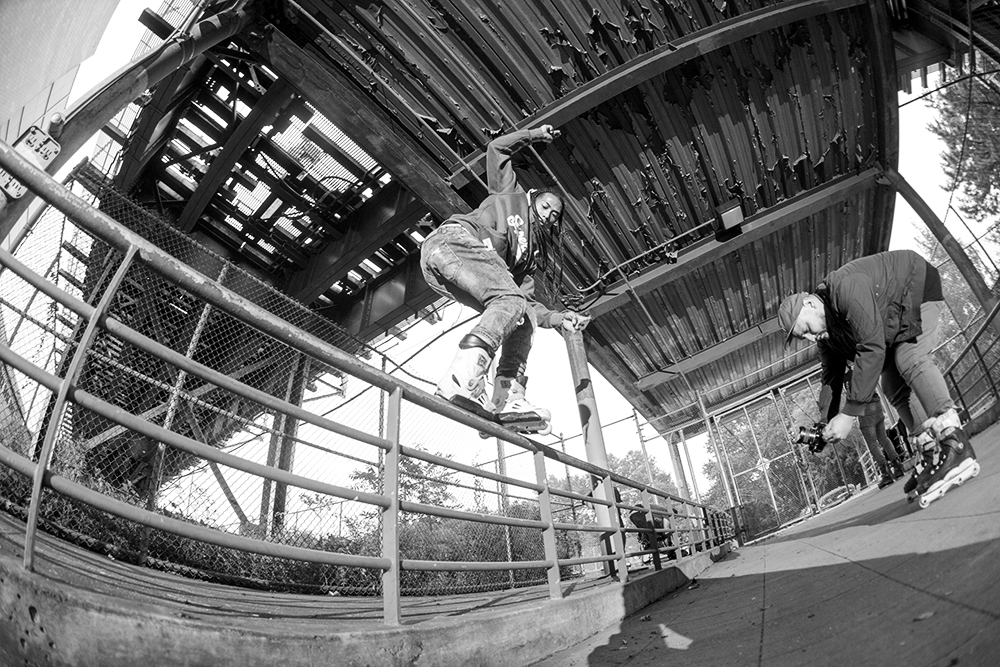 Sin commits to a topsoul to true top soul at John Dewey High in Brooklyn, NY. Photograph by Ryan Loewy for Be-Mag.

Sin’s eagerness and passion in his words rings true to me at that point, as it was an ethos that I felt is dire to have for anyone currently involved in the sport, especially with the younger heads.

Chino didn’t give a shit about who was gonna be there or what the prize pot was, rather, the idea of being able to congregate and compete with like minded individuals was incredibly appealing to him. 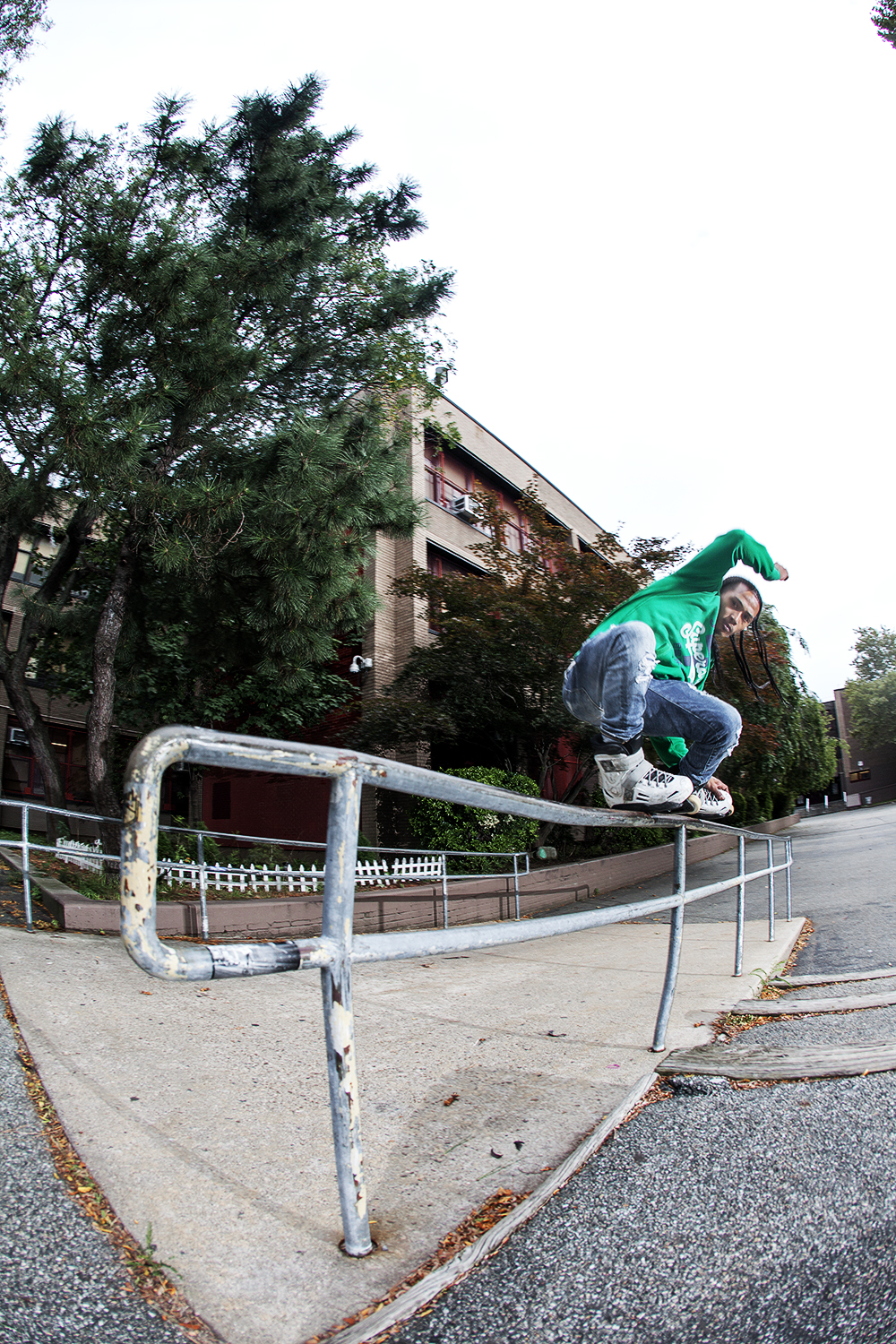 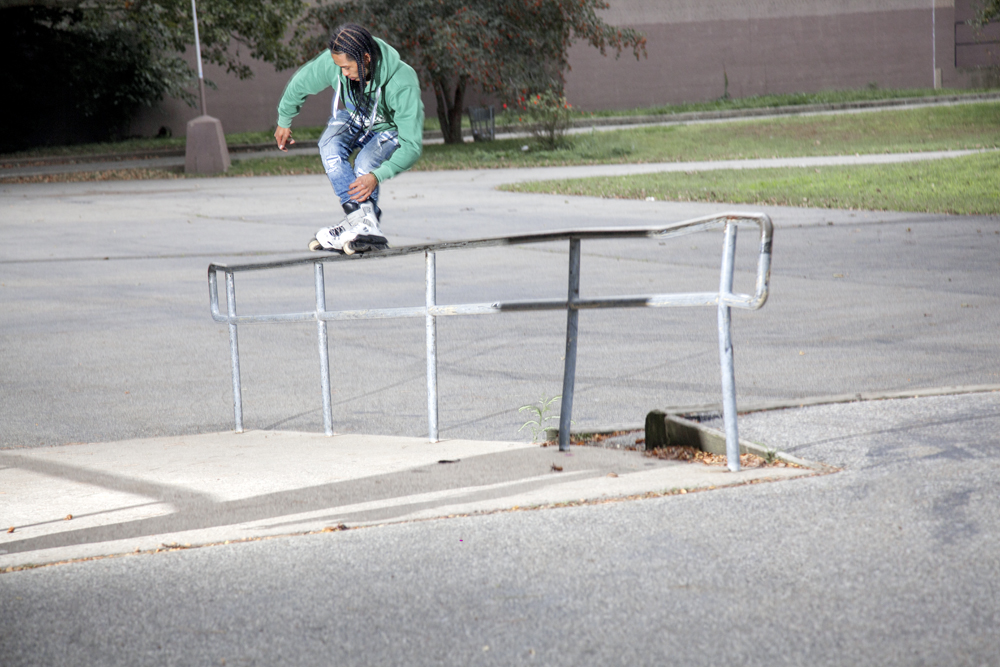 Sin dials in on a classic spot. As seen above, a grabbed front farv up the rail followed by a front savannah down at the classic John Dewey High in Brooklyn, NY.

Photographs by Ryan Loewy for Be-Mag.

We carried throughout the day, finding ourselves end at John Dewey High, a classic NYC spot. Sin dialed in a few warm ups before honing in a grabbed back Farv up the rail, followed by a few front savs down before peppering it with some intricate switch ups, something he’s begun to earn recognition for.

We begin to wrap, and each of us takes turns climbing the fence to get out of John Dewey. We each give our good byes and part ways, with Sin inquiring about when he’d be able to see the photos and footage we had shot. “It’ll be out soon, I promise”, I tell him, which is met with a huge smile from Chino in response.

He’s eager to see his what he had accomplished. 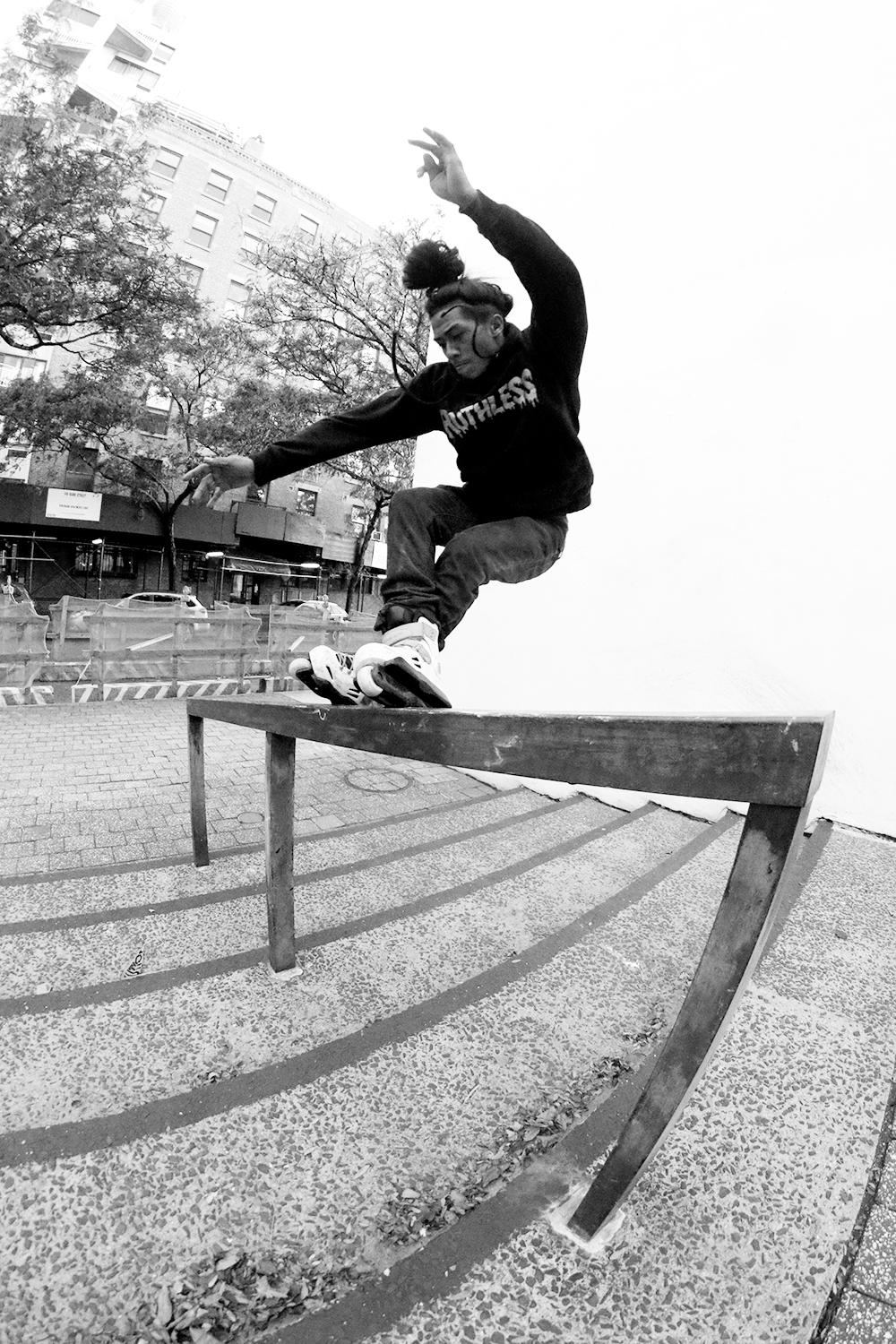 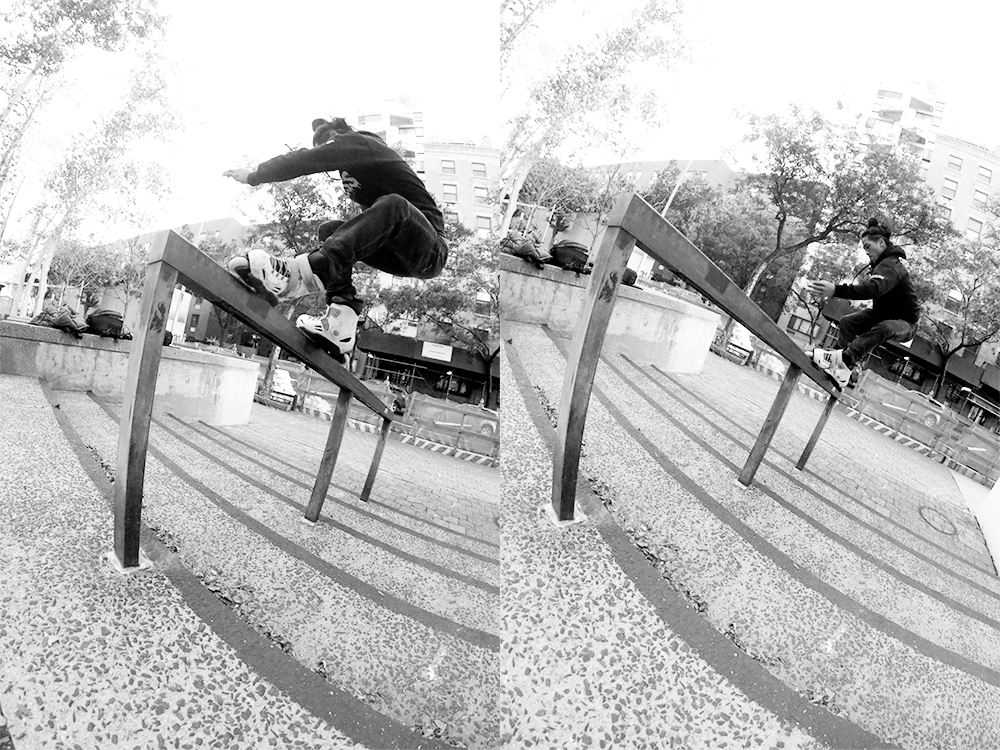 Chino laces in some more. Pictured above, a front savannah, followed by a Kindgrind. Photographs by Jordan Baez courtesy of Ghetto Community.

We reconvene a few days later via Instagram messenger to review some outstanding questions. After a few back and forth’s, we end up on a simple topic, that being, what’s next?

” My accomplisments include improving myself, particularly with a better job, like working for BMW or Mercedes.” Sin is mature in his assessment of his goals, aware that he needs a stable career to compliment his pursuits with skating. While rational and humble in his understandings of what it takes to make it all work, Sin isn’t shy to acknowledge his worth.

“Other than that, I’m aiming for a dope sponsor, you know, to notice ya boy’s talent!” 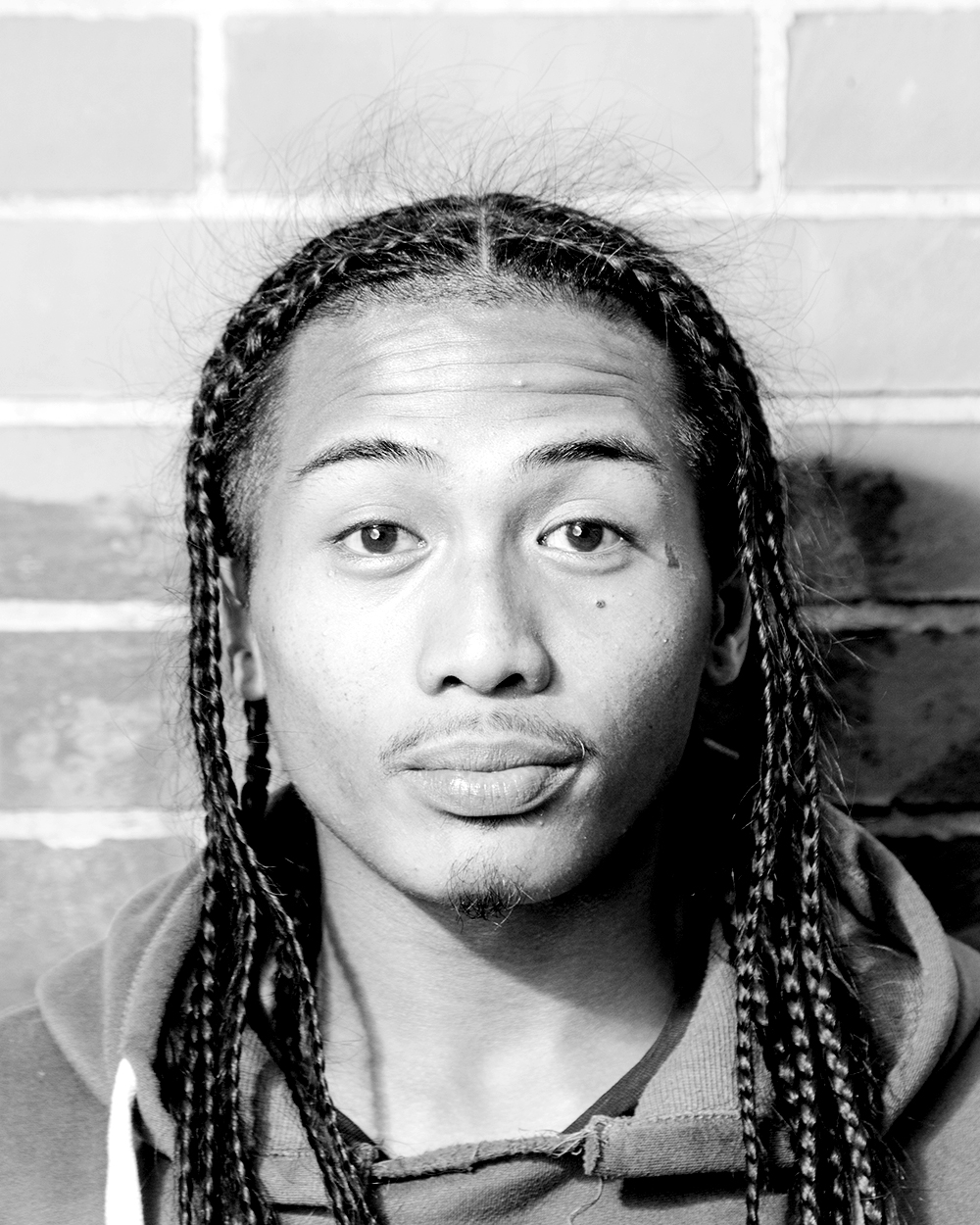 Chino Sin lives in the Bronx, NY and currently rides for Ghetto Community.

Craig Benabu is the founder of I ROLL NY, which has been documenting the NY scene for over a decade.