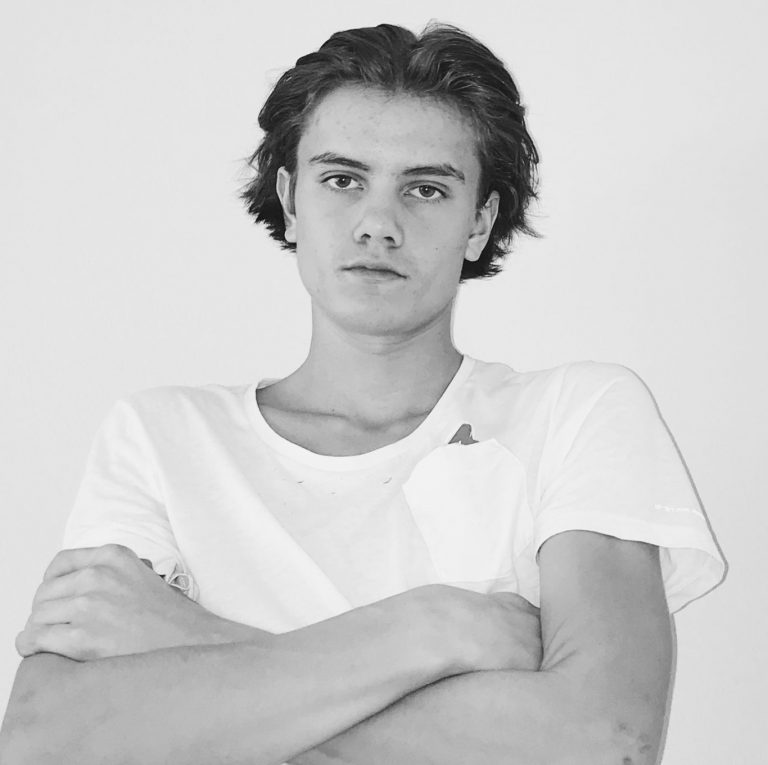 NORWAY’S DANNING IS ON THE RISE 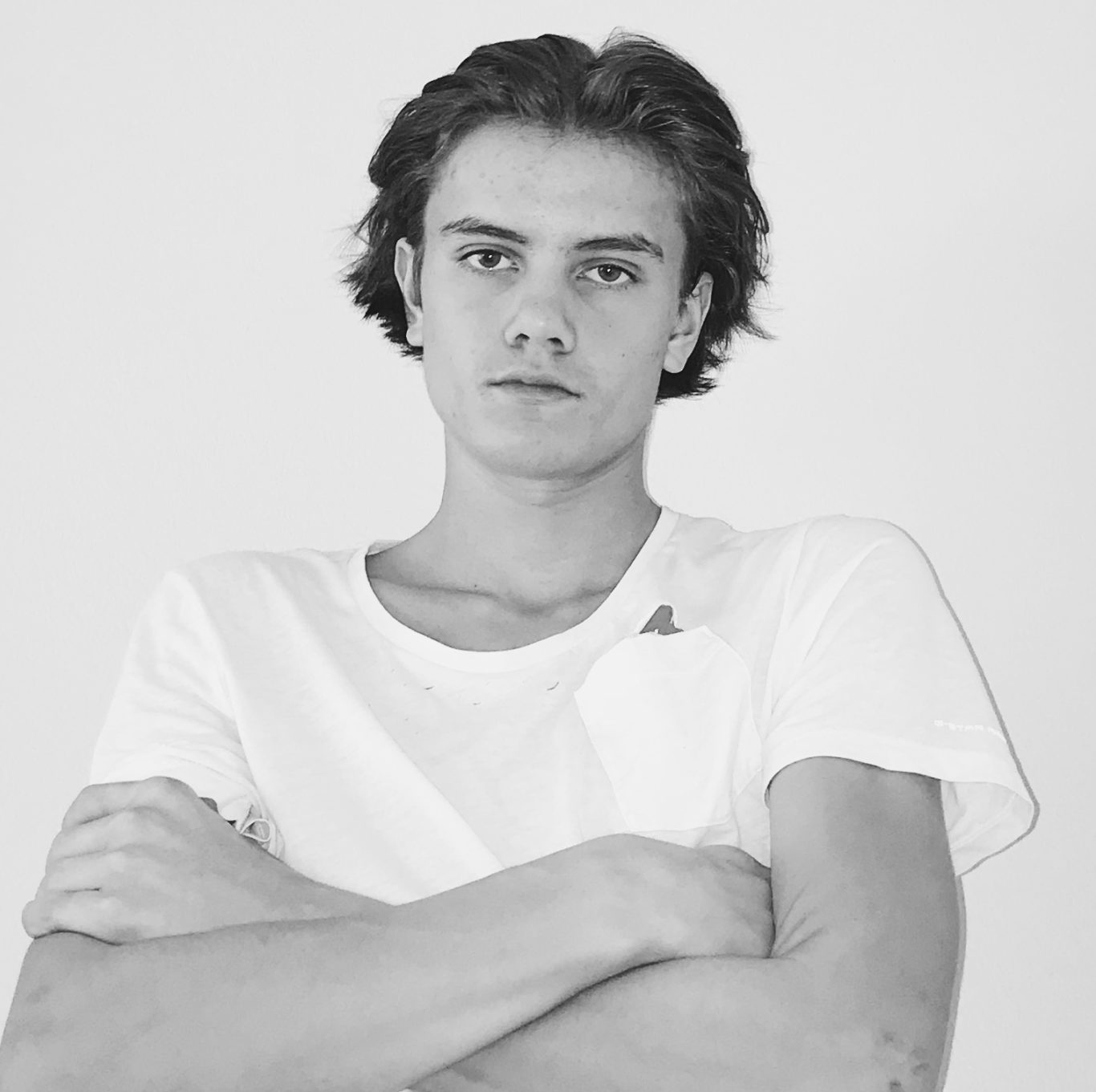 Martin Danning is a part of the new generation. Although on skates for almost on a decade now, he has started to gain more attention in 2018 it seems; GQ good looks paired with a stylistic yet calculated approach to skating, the attributes combined would in turn warrant a sponsorship with Roces. Not even in his 20s yet, Danning has a mature understanding of what he wants out of himself and his skating. He’s focused on style and the intricacies in his craft; something that is evident when you watch him skate.  And while he may get a brunt of hate for his approach to skating, Danning is assure of himself. We sat down with Martin recently to learn more about him and to see what he has in store for 2019…

So bring me up to speed with you and what’s been going on for you the last couple of months. You recently got on Roces….

Yeah. I mean I kinda was riding for Valo before all that. Or at least getting skates from Jon. And when that whole Valo thing ended I was kinda in a dilemma. Hung out with Jon and the whole THEM crew at Winterclash and that kinda seemed like the obvious move for me. But then I got contacted by Marco (team manager) for Roces, telling me that he wanted me on, and it was almost a no brainer. I felt like I would play a bigger part in Roces than what I would if I was on THEM. I felt kinda bad in the beginning, not supporting Jon and all, after all, he helped me out the previous 4 years, but seeing how well Jon and THEM are doing makes it easier for me. I wasn’t ever involved with the Valo thing as much as I’d like to have been.  The M12 boot is also the perfect skate for me; slim, sexy and simple. I’m also super thankful for what Jon did for me and stoked that everything seems to go well with THEM.

It’s good to see your perspective, it’s very mature. So let me Ask, how long have you been skating and how did you get into it originally?

I think the first time I had skates on my feet was in 2008. Normal rollerblades, black and yellow. Removed the middle wheels and shredded on them for a while. My brother was the one who started blading and I guess I was an annoying little shit who wanted to do everything. He’d eventually quit and yeah, I still blade. So roughly 10 years now. Fuck. Hahaha. 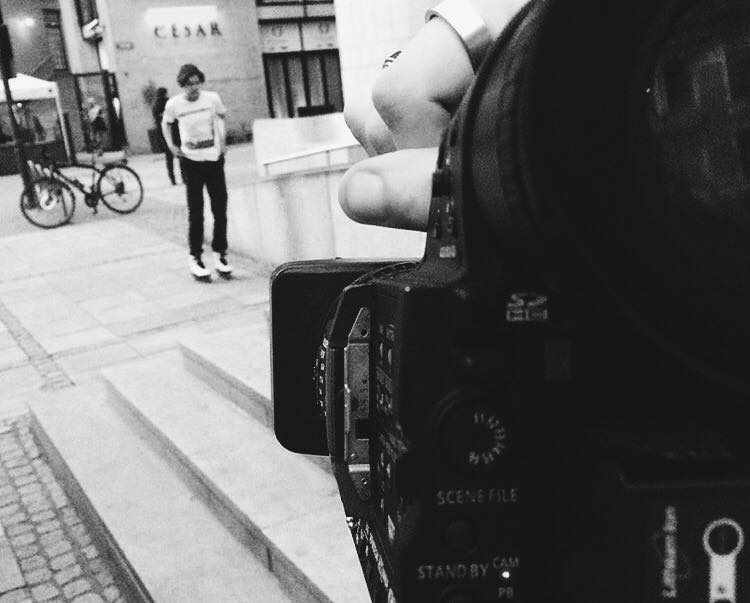 Martin reviews a spot in Oslo, Norway in June of 2018. Photograph by Alex Francisco.

Isn’t it crazy how fast it goes?

Yeah. Pretty surreal to think about. 10 years is over half of my life

How old are you? 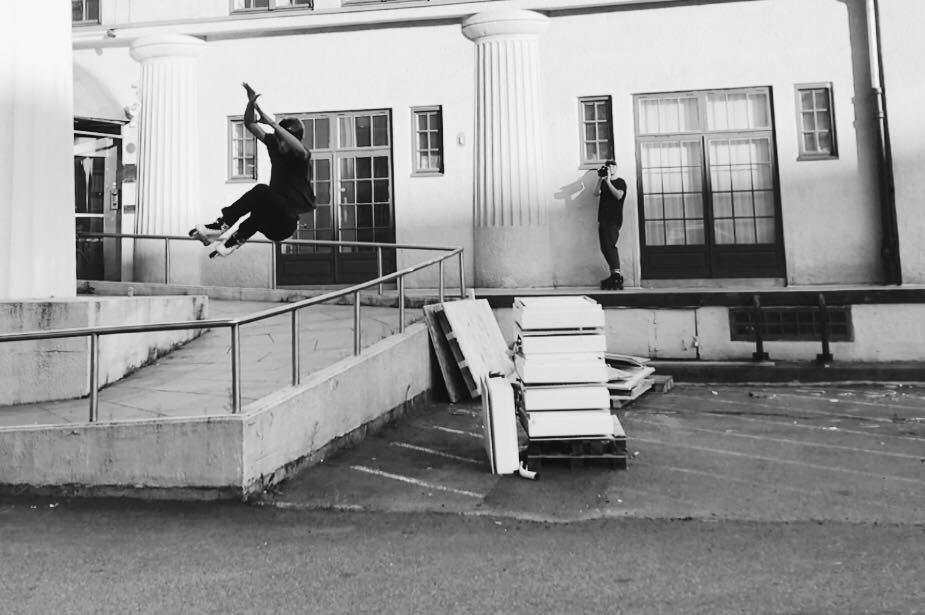 The end of a BS Royale 450 Out in Oslo in August of 2018. Photograph by Didrik Lomsdal

Haha! It’s all good. I’m a big geek for nostalgia. Like while we are doing this interview, I’m watching this series on Netflix called the 80s. I enjoy learning about the time periods before me and like, the ones I grew up in. There’s something romantic about it…

What would you say are some of your major influences or inspirations in your life?

I would say a lot of my inspiration comes from music. The way a song makes me feel makes me blade a little different. I’ve taken a lot of inspiration from this skateboarder Dylan Rieder, who sadly passed away 2 years ago. But it’s more that I found myself in his mindset and clothing, without sounding too clichè.
Also Adam Brierley and Gabriel Hyden is a huge inspiration for me. 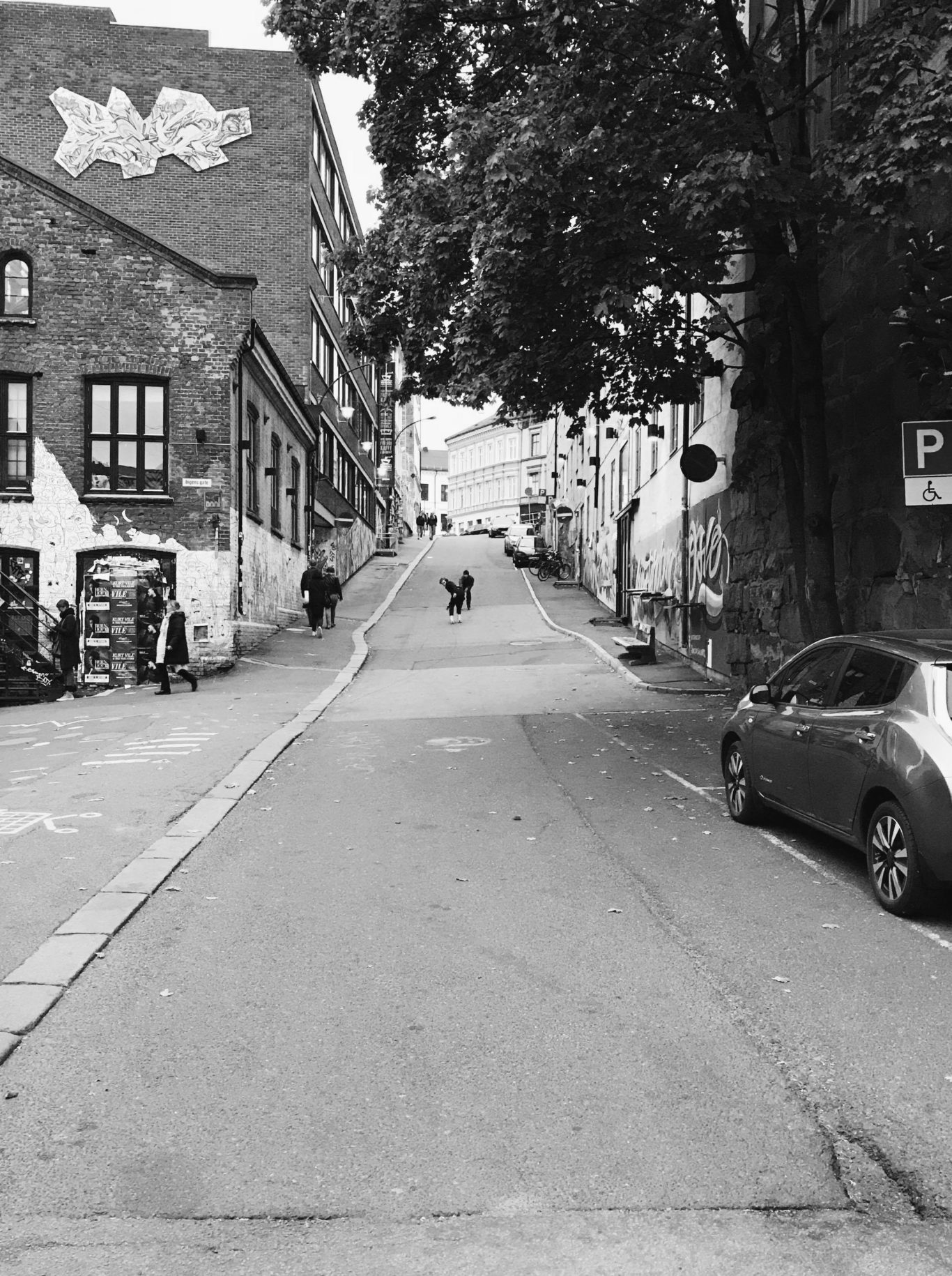 Fakie Hill Bomb in Oslo during a day in late September of 2018. Photograph by Alexy Bryukhovskiy.

Dylan was one of the best. There was something incredibly unique about him. Like a James Dean.

Yeah I know. It’s weird for me having someone I idolized so much since I’ve never had that before.

His landings are my favorite; his arm placement…I feel that’s very important in making a trick look good

Oh yeah definitely. Just look at the overall most liked bladers. Broskow, Farmer, Sizemore, Aragon….. they all have a very specific style. It very rarely changes drastically. If it changes, it does have a smooth overlap. Not like a teenager who is one day a punk and the next day a pop artist. 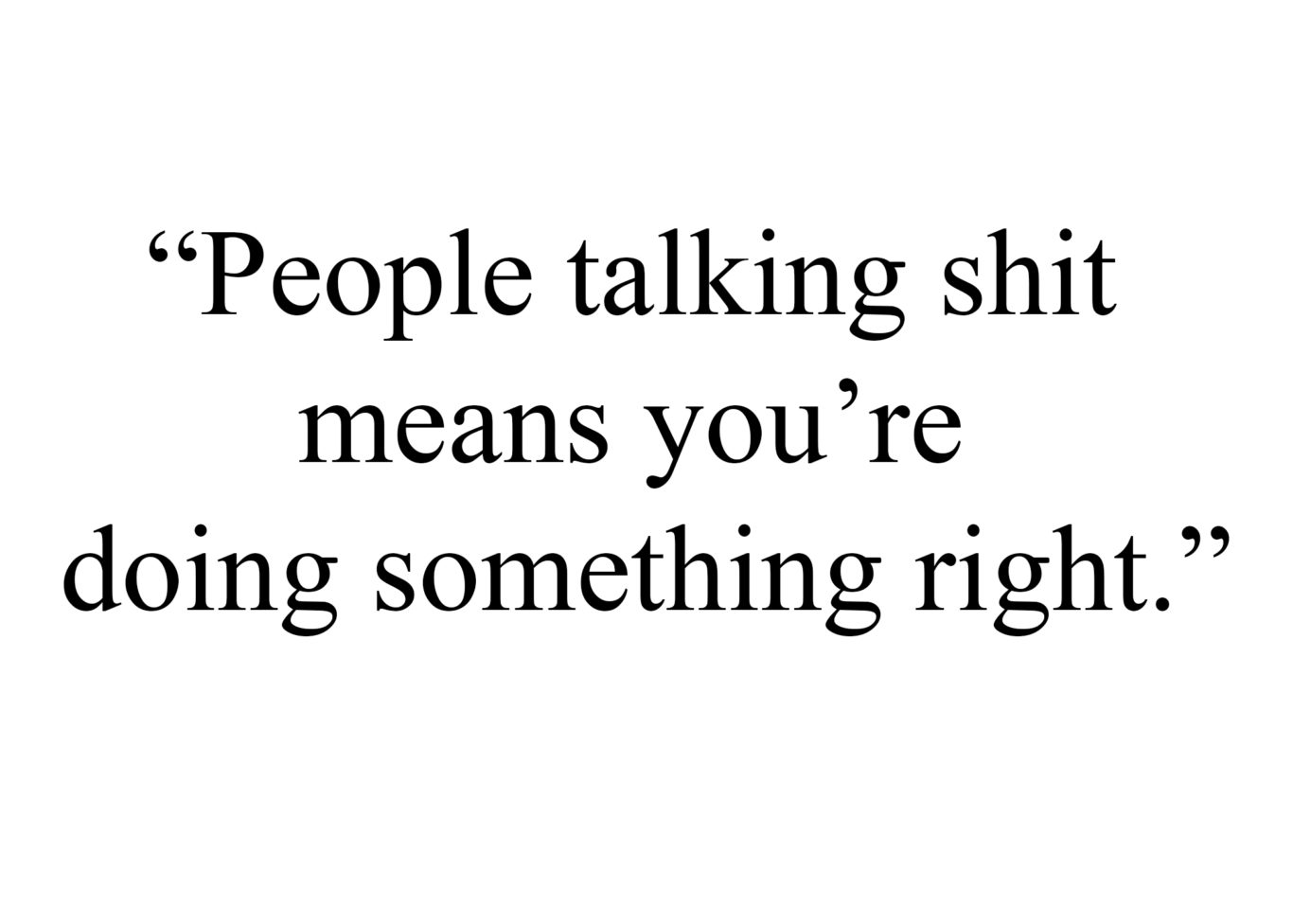 Agreed. Style is a natural progression i feel. And i feel Blading has progressed a lot over the last decade. I know you probably hear it, as i hear it quite a lot, but this theory that blading used to be better back in the day due to the magnitude of the tricks done…I don’t buy that shit at all…

Yeah that’s a pretty common one. And I know I’m a name that could be mixed in with those comments, which I don’t mind. People talking shit means you’re doing something right. I think it’s more that blading is sort of a new thing than what it was. We also don’t get checks that pay our house rent anymore, so why would people risk their life? I also think people appreciate different stuff within blading now than they did back then. For example, the sound of a clip is like 70% of the clip to me. Or the sound of the curb, landing or whatever. I don’t think stuff like that was as much appreciated back in the day. Blading has become more an art than what it was; it’s not necessarily what you do, but how you do it. I think that’s when you can say you are a good blader. When you do a trick that you have done a million times one way, then suddenly find a new way to do that trick. For example, a top soul; grinding the fastslide a little bit then slapping the fish foot on. Stuff like that Is what I’ve been enjoying lately . 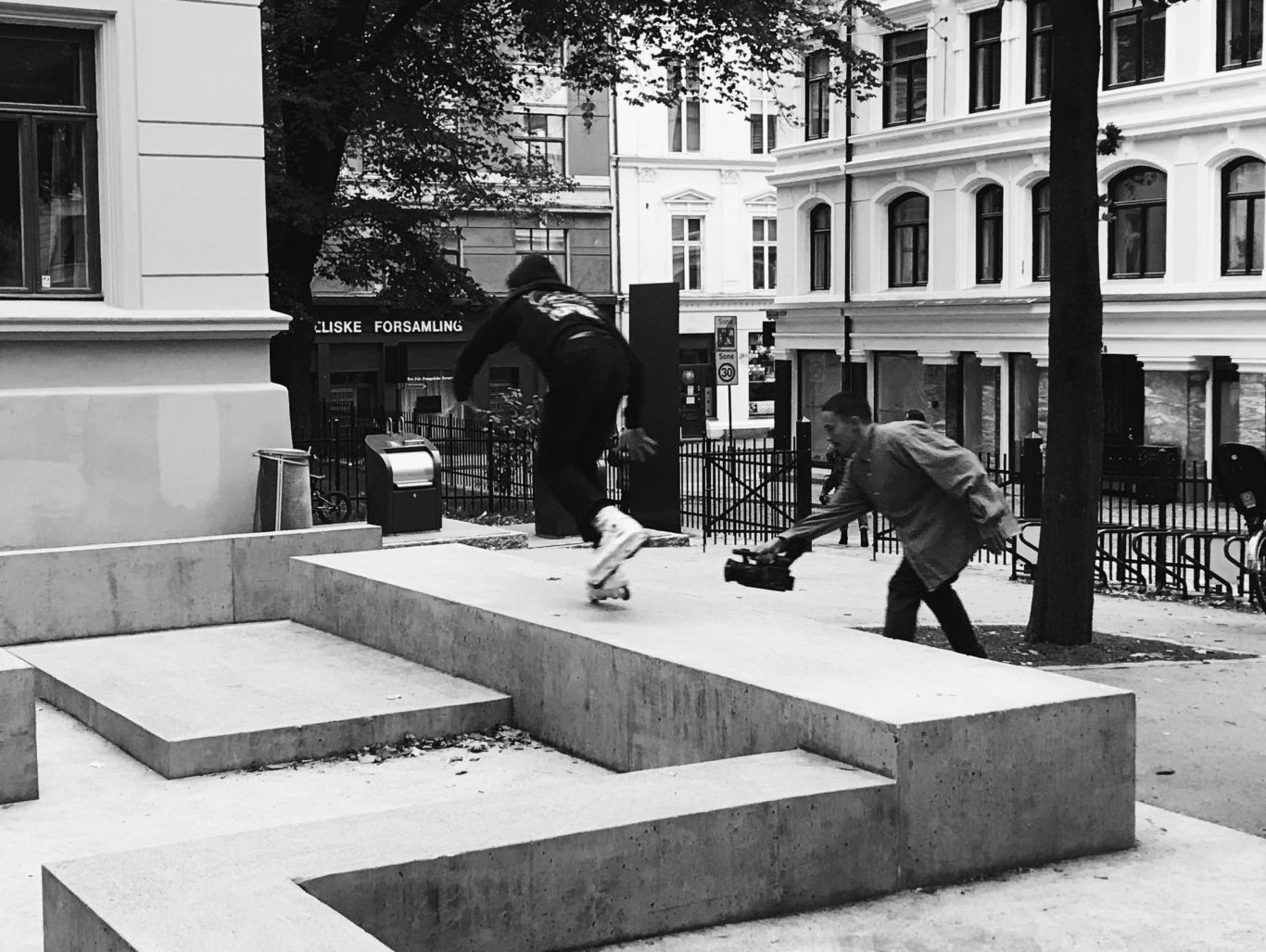 Another late September day, Martin dials in a Toe Roll to a Soul Tap over the curb while filming for an upcoming Oslo based video project. Photograph by Alexy Bryukhovskiy.

Yeah. Maybe it’s something to do with the fact I’m a music nerd…

It’s a intriguing theory. You are kind of a composer in that regard, a beat is made…

That’s why I can’t skate if my skates make the “click” sound. I’ve found a couple hacks to avoid the click click sound. I love loud bearings. That’s like the drum to my skatesound song.
Music is such a wide thing. You can skate a small curb like listening to Leonard Cohen or you can skate a giant kink rail and listen to Sex Pistols. I mean… music and blading goes hand in hand. They are both ways to escape reality for some minutes, hours or days… 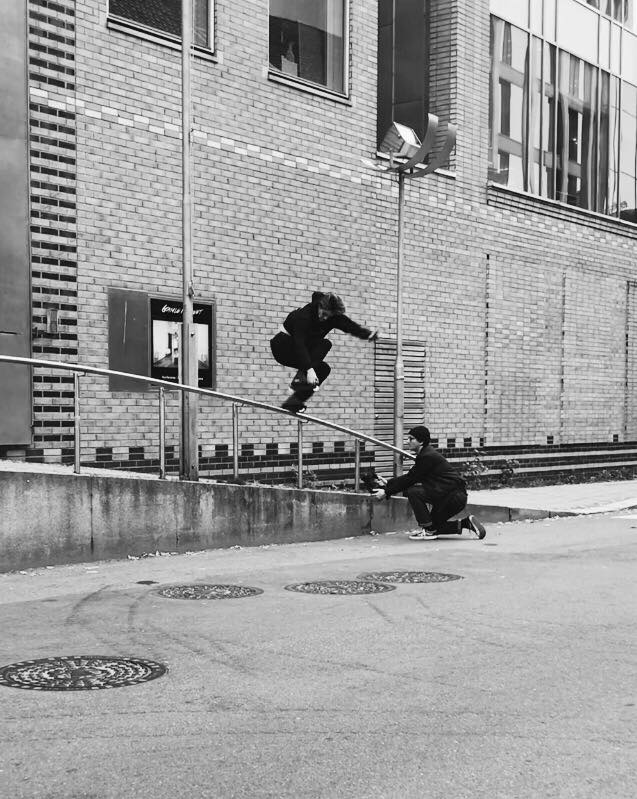 Danning dials in a Backslide in Oslo in October 0f 2018. Photograph courtesy of Martin Danning

Agreed. So you also do modeling too yeah? How did you get into that?

Haha yeah. Umm… Well the agency I’m in now first tried to contact me last summer, but I didn’t see the mail. At that time, another agency contacted me but I wasn’t really feeling like doing it after the first meeting cause they were like “come back tomorrow to take Polas. Just remove your nail polish, rings and bring tighter pants”. So I basically said goodbye in a rebellious teenage at that point. And then a couple weeks after, the first agency that contacted me that summer contacted me again and then I saw it. Went to a meeting and they were super down with everything and love the blading side of me and actually wants to push blading also. They want me for who I am and know what I’m into and not into. It’s pretty fun. You see a lot of hot chicks.

So let’s wrap this because i feel we have covered some good ground. What’s in store for Martin Danning in 2019?

Well I’m working a full-time job in a kindergarten so that takes up a lot of time. But hopefully I’ll be traveling more, maybe release some music, keep filming, piss people off, make people happy and hopefully not make people sad. That’s my plan… 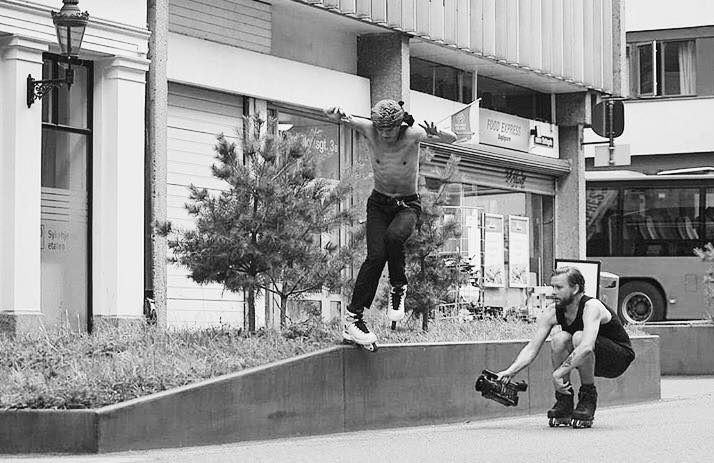 In the midst of a BS Unity to Budget Top Soul in Central Oslo in Late July of 2018. Photograph by Samuel Cabezas.

Martin Danning lives and works in Strommen, Norway. He currently rides for Roces, Ground Control and This Is Soul Skate Shop.