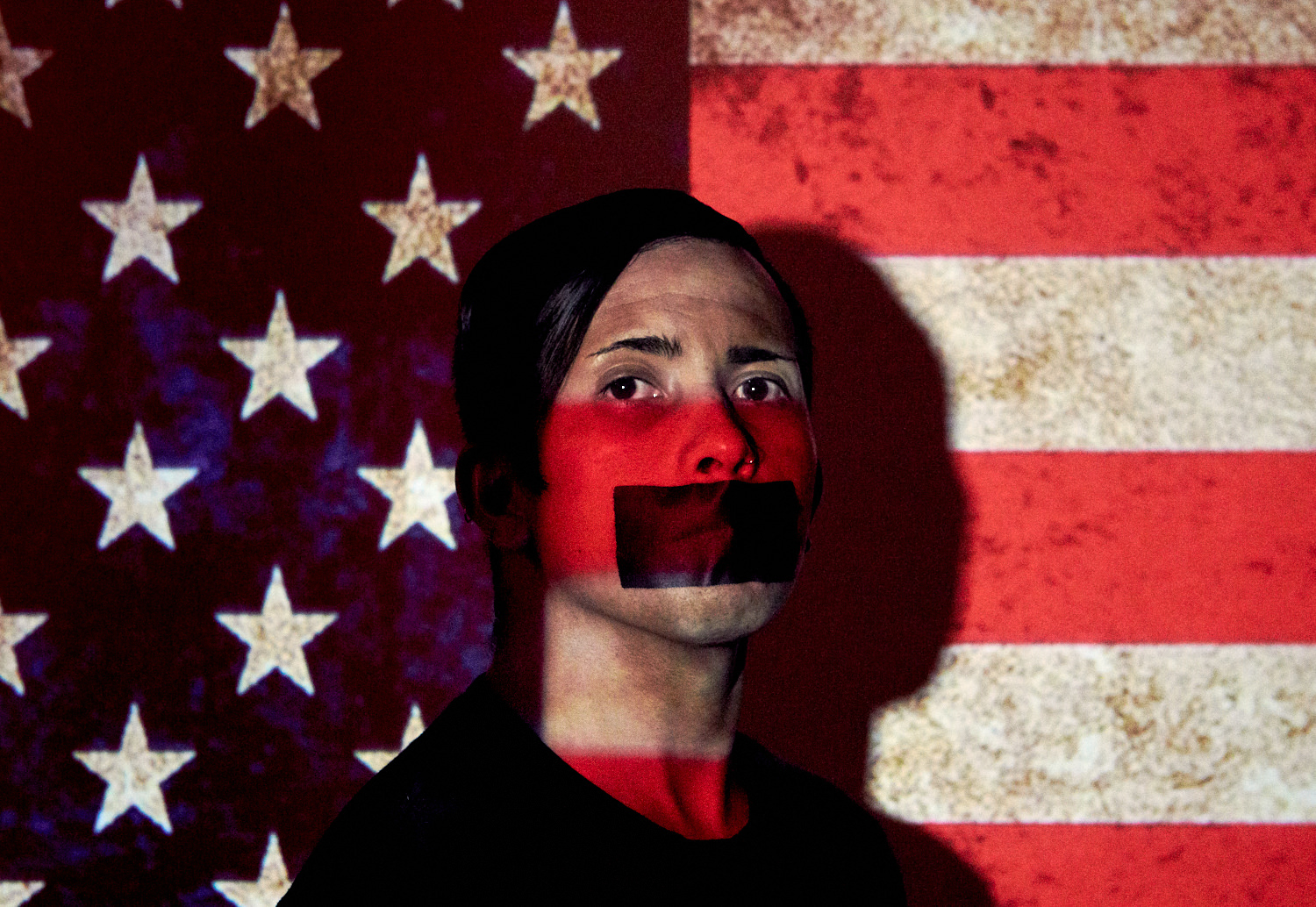 WHAT IT MEANS TO BE AMERICAN AND UN-AMERICAN

I don’t usually see myself as a person of color.  My parents are from the Philippines and El Salvador, but I am American.  I was raised to be an American.  According to my father, my first and middle name (Jonathan Michael) were given to me so as blend in without a second thought. While I hold on to traditions engrained early on from my mother’s Latin American upbringing, I struggle to maintain a conversation in Spanish.  I know very little about being Filipino besides the foods my father brought home once a week to remind himself of his childhood.  I am the son of two government employees, born and raised in the multicultural city of Los Angeles.  I have no connection to foreign soils.  I feel no allegiances to ancestries not part of my daily life.  I was educated to be an American, under an American system, under American rules.  Fairness and equality for all were the doctrines drilled in.  If I just abided by the laws of the land and work hard, I could succeed.  The American dream is a flag flown without color-bias just as Lady Justice is blind.  Impartiality is built into the system that can do no wrong.

Then, why do I feel so un-American the older I get?

The needless death of George Floyd at the knee of white police and the weaponizing of racial biases by a white woman against Harvard-educated Christian Cooper stirred up my own lifelong struggle with what it means to be American when you’re treated distinctly different by a society that constantly rebukes your racially motivated experiences as exceptions rather than the rule of law.  I’m a colorless American when it’s a convenient narrative and a foreigner-the other-a non-white when I’m perceived as out of bounds.

As protests have mushroomed across the country, so have the number of instances inflicted upon me have risen to the surface.  I want to refrain from using the word ‘triggered’, yet that’s the only phrase from the public lexicon that envelops this stacked deck of discriminations.  I know I am a person of color and a second-class citizen in those instances.  I recognize how un-American I am when someone recently said to me racism is a non-point if you just stand up to it and don’t let it have power.  That’s not how racism works.  It’s insidious.  It infiltrates every part of my life and manifests itself when I least expect it.  Rarely has it ever been a slur I could refute.  More often than not, it’s an action that sinks into the pit of my stomach because I know I’m on the wrong side of power.

Some instances are as transactional as going to Hot Topic to purchase hair dye for my best friend.  When it came time to check out, I paid with a fifty-dollar bill to purchase two bottles.  A cashier routinely checking the authenticity of a bill with a marker doesn’t raise alarms.  I wouldn’t expect any less.  The bill checked out and yet the cashier fussed, calling a manager who informed me they couldn’t accept the bill.  I promptly pulled out a credit card and put on a smile for their troubles.  Another instance involved walking into a second hand store that I had been a patron of for years at multiple locations.  I walked in with my messenger bag without a second thought and made my way to the back of the store to the men’s section.  Two minutes in, a white cashier from the front scootered her way towards me and asked me to put my bag into check in.  I explained it had never been an issue previously, but was met with “it’s store policy.”  I obliged and went about shopping.  Only after several minutes did I notice every other patron still had their backpack, purse, or bag on them.  Every white shopper I encountered only made my blood boil.  I went to the front, demanded my bag and stated every other person was allowed their bags.  Her response? “I saw you first.”  From the front of the store—tracked down and apprehended.  And the other shoppers? “I can’t stop everyone.”  But just me then?  I was sarcastically told to have a nice day as I left.  Unfortunately for her, I worked in public relations and reached out to their PR department with my story and said I’d make it a public issue.  I received a phone call from corporate in 5 minutes and within 20 minute had a district manager on the line.  Turns out the district manager is based out of the same store and I was able to meet them in person.  I was given the spiel about how this is not acceptable, employees would receive training, and here’s a gift card for my troubles.  $20 dollars to keep quiet about their racist employee and keep the story to myself.

There are more serious interactions involving the police that legitimately frightened me.  One experience was at skate session where a group of us (predominantly people of color) hopped into a school to skate a rail.  If you get busted at a school, at worst, you expect cops to read you the riot act and write you a ticket.  Instead, we were surrounded by ten officers at gunpoint and yelled at to “get on the ground and get on our knees,” hands on our heads.  We sat in that position for at least 2 hours while being interrogated.  “We saw your buddy upstairs.  Who is he?”  “We don’t know who you’re talking about. It’s just us.”  “He’s hiding out.  Who is he?”  “We came here to skate. If there is someone here, they’re not with us.”  Guns stayed pointed at us for a majority of the time, with the idle threat of being taken to jail that night thrown around by the lead officer.  Eventually, we were let go with tickets that eventually were all dropped.  Turns out, they never filed the reports to the courts.  Still, I had never had guns pointed at me by an officer until then.

More recently, I had a white neighbor who stopped paying rent for over 6 months.  I didn’t know if they were still living there or not; I hadn’t seen her light on in weeks.  I was having issues with my landlord myself and there was a chance the city might try to evict all the tenants.  One day after skating, I went to the grocery store and came home to a note on my neighbor’s door (hers was the main unit).  For a second, I thought this was it, we’re all booted. As I strolled up to the door, grocery bags in hand, I read the note to be a notice of entry for my neighbor.  They believed her place to be abandoned and would be entering it in the morning.  As I was reading it, the door handle rattled open and from the darkness, my neighbor yelled at me to go away.  “I was just reading the note.” “Get the fuck out of here!” “Okay, but I was just trying to see what it was about.” “I’m going to call the cops!” “Call the cops, I didn’t do anything wrong.  I read a piece of paper—they’re not going to do anything.  Call them!”  I shook my head and retired into my apartment.  Two hours later, I was met by a knock at the door. “LAPD. Can you come out, sir?”  I stepped out and was immediately told to turn around and face the wall.  I was put into handcuffs and told not to move just feet from my door.  The officer stated they were responding to a call from my neighbor.  There were several more minutes of talk and calling into the station.  They asked to see my ID, to which I had to explain to the officers where it was inside.  I calmly and concisely asked what was I being charged with.  My neighbor had given them the statement that I had attempted to break into her home and she caught me in the act at the door, hands on the handles.  I kept myself cool, well-spoken, and body language as relaxed as I could.  Still in handcuffs, I was told to give my account of events. Afterwards, I was told even though it was a he said-she said instance, there was a good chance I would be going to jail that night.  Luckily for me, the commanding officer at the station wasn’t around to pick up their call and I was told they would allow me to stay but a detective would be in touch.  Handcuffs released, ID handed back, police flashlights trailing off into the night.  I immediately called my landlord to let them know what had just transpired and how the neighbor had falsely accused me of an attempted B&E.  Their words were, “Don’t worry about it, get sleep.  I’ll be by in the morning.”  The next day, they evicted her.  I never did hear from that detective.

In retrospect, the latter experience was a dead ringer for Amy Cooper’s frame of mind.  To paraphrase a recent monologue by Daily Show host, Trevor Noah, she knew how she perceived herself, she knew her relationship with the police as a white woman, she knew how the police perceive a person of color and how a person of color perceives the police.  More directly, Noah goes into the unspoken internal monologue of Cooper stating, “I know that as a white woman I can weaponize this tool against you and I know that by the time we’ve sifted through who was right or wrong, there’s a good chance you will have lost in some way, shape, or form.”  Here someone white was willing to ruin a life because a person of color wouldn’t concede to their privilege.  My life was of no consequence as long as her privilege was reaffirmed and I was punished for challenging it.

In society, we adhere to a social compact.  We agree to a set of rules that everyone abides by.  The agreement of laws of legitimacy. Broadly, we agree to what the principles are, how and who is enforcing them, and that everyone in society is going to be treated fairly.  In America, we extend this to also include what is in the Declaration of Independence, “that all men are created equal, that they are endowed by the creator with certain unalienable rights, that among these are life, liberty, and the pursuit of happiness.”  If you’re white in America, all you have to is to assert that you have these rights.  If you’re a person of color in America (especially if you are black), you’re not afforded the same fair treatment and unalienable birthrights.  You have to fight to explain that you deserve it.  You are American and un-American concurrently.  I have the title of being an American all the while I’m not afforded the same innate sense of equality.

Imagine what it’s like to have your own country delegitimize that feeling and say “all lives matter.”  To stop inconveniencing everyone, just let law and order take its course.  To let the white lawmakers, white law enforcement, and white society fix this while you go back to being seen but not heard.  Imagine what it’s like to feel that daily.  That’s what it means to be American and un-American as a person of color at this moment in time.