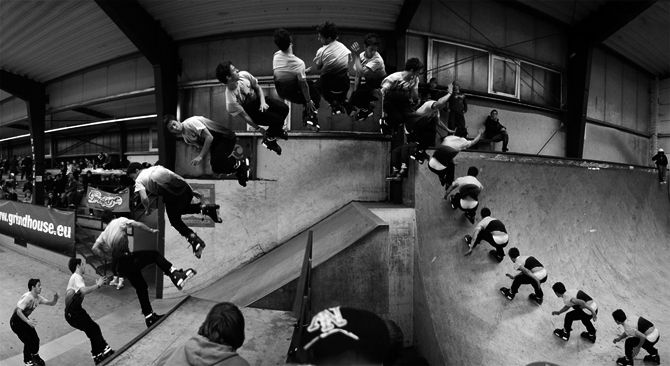 An Outlook on X-Mas Jam 2011 with Organizer Jonn Rübcke

Interview by Marco Sichau & Christoph Böttcher
Photography by Sebastian Hofer
Jonn, we are happy about the fact that this traditional event will go down again this year. How did that come about? Can you tell us a little about its history?
The history of the “X-Mas Jam” in Hamburg’s I-Punkt Skateland goes back to December 1995, when Carlos Pinto created a small contest for the local Rollerblading community. Ever since then, the management of the skatepark and me tried to support Rollerblading as good as possible. Because, in fact, without the Inline-Boom in the mid 1990’s the park would not have survived.
After the park moved to a new building in 2000, I re-invented the X-Mas Jam in 2002, together with Kai Weise and under the label of our Magazine “Roll2Soul”. It was a great success and skaters from all over Europe and even the US came to Hamburg for our contest. In the last years the X-Mas Jam was organized by Maik Lojewski, who once again brought the event to a new level.
So, celebrating its 17th birthday this year, the X-Mas Jam is probably one of the most traditional contests in Europe, in a city with a strong and fresh Rollerblading community.

What motivates you to organize an event like the X-Mas Jam?

The X-Mas Jam 2011 is my personal way to say “Thank you” for a great time. My work and passion for Rollerblading made these 15 years unforgettable for me. And today, seeing the next generation growing up like Melvin Siemianowski, Stain Bond, Fedor Simonov, Jan Navitzki or Mirco Helbing, gives me the positive feeling that we in Hamburg at the I-Punkt Skateland did a good job in supporting the Rollerblading scene for all these years. So, I hope to see some of the people once again here in Hamburg whom I saw growing up over the last decades.

What will be the difference from the past year’s X-Mas Jams? What can we expect?

The most significant difference is that the event will be held on 2 days, Saturday and Sunday. Last year the Am group was limited to 50 skaters, this year there will be no limitations, and additionally we will have a Juniors- and a Girls-competition. Also remarkable is, that the price money is 3.000 € in total this time, 1.000 € for 1st place Pro, 600 € for 2nd place and so on. Even 12th place gets 50 € and the German Champion gets 400 € extra, no matter which place he or she scores in the overall ranking. Catering for all riders is granted, and we expect an audience of about 1.000 people on Saturday and Sunday. The X-Mas Jam 2011 will be a highlight of the year again and a good place to celebrate Rollerblading once more. Meet old friends, make new friends and just have a good time!

How has the skaters reaction to making the X-Mas Jam a two days event been so far?

The X-Mas Jam was constantly growing over the last years, and one day simply is not enough time. We did not want any limitations this year, we did not want to exclude anyone, especially not the young guns, as they are the future. So we already decided last year that the next X-Mas Jam must be held over 2 days. I know that this causes some problems, like higher costs for hotel/hostel and some people said that they want to party on Saturday night and won’t be fit on Sunday for skating the finals. But the Pro finals start at 4 p.m. on Sunday, and the 12 finalists may drink one beer less and will be able to skate, hopefully. And maybe the skaters also like to have a little more time to hang out with each other, enjoy the infamous nightlife of Hamburg together and meet again next day for the finals. The X-Mas Jam has never been just a contest, it has never been about money, pressure or fame. This event has always been kind of a family meeting.

From a rollerbladers perspective the park’s street setup has only been “down graded” over the last couple years. Do you plan to modify current or add new obstacles to the park to keep the competition fresh?

Sad, but true. The I-Punkt Skateland is Hamburgs most frequented youth facility with about 100.000 visitors each year. Most of them are not professional rollerbladers, most of them are skateboarders, beginners. So the park is not an X-Games parcour. But, yes, we will add 2 coping-boxes and create some extra obstacles, so some new tricks will be possible this year. Just check the facebook event page as we will keep you in the loop of everything over there.

The X-Mas Jam will again serve as the German Championships this year. Which big names have already confirmed their participation? Will there be international riders as well?

We do not expect riders from the US or overseas, but we are happy that some of Europe’s top-riders have already confirmed their participation such as Julien Cudot, Adrien Anne, Kenth Ulvedal, Jeremy Kessler, Anthony Pottier, Scott Quinn, Nils Jensen, Stefan Horngacher, Edwin Wieringh and Daniel Nielsen. It is the official German Championships, but it is open for everyone. The riders list of the German Pros is constantly growing as well. So, once again, the X-Mas Jam will be quite an international contest.

Looking at the prize money of 3000 € for the Pros and up to 3000 € in goods for the AM contest etc. this event will be a pretty big deal. Who is backing the event as a sponsor this year?

The main sponsor, as well as in the last couple of years, is Grindhouse. I have to say I am really happy and thankful for Thorsten’s continuous support for the event. Also a local Bank is sponsoring a part of the prize money, Red Bull takes care of free drinks and we have stuff from brands like Razors, Remz, Ground Control, JUG, USD, Kizer, XSJADO, Undercover, unmac clothing and UCON. Tons of stuff!
After all, I was really surprised and stoked that every single person, every single company I asked for support answered my requests in a positive way, mostly within hours.
So, I like to thank Thorsten of Grindhouse, Andy of Sunshine Dist., Matze at Powerslide, Jochen at UCON, Andreas, owner of unmac clothing, and also Mark Stamer, who will serve as head-judge over the weekend. And most of all the one and only Miguel Martinez, who will lead you through the event!

If you should convince somebody to travel to Hamburg for the event this year, what would you tell them?

I think everyone who has attended the X-Mas Jam in the last 16 years does not really need to be convinced to come again. But if you’ve never been here before here is a quick summary on what to expect: prize money is good, some modifications of the park will be made, tons of stuff is waiting for the Ams, Juniors and Girls, the atmosphere is always great, and Hamburgs infamous Reeperbahn guarantees some nice after-show party. For Pros maybe the fact that the X-Mas Jam is a 2-Star WRS event this year also matters. So, if you can’t wait for the Winterclash, just come to Hamburg and taste a little bit of the spirit of the infamous X-Mas Jam and celebrate rollerblading!