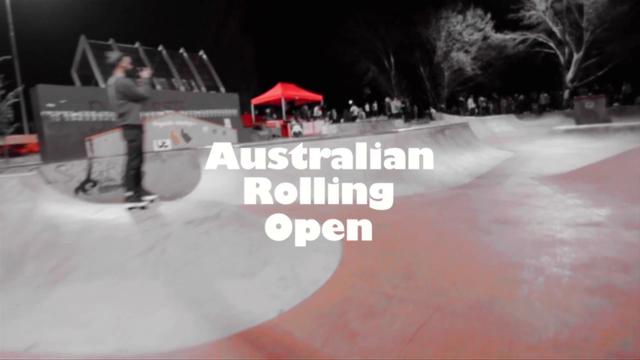 Canberra’s skate parks are a huge attraction for rollers from across Australia, a result of generations of Canberra governments who have been progressive in terms of the facilities they offer. CJ Wellsmore’s place as arguably the best park roller in the world is a direct result of the skate parks that are made freely available for public use. The Bush Capital has the greatest number of skate parks per capita in the country and they’re not just small quarters or bowls scattered across the country side, there’s the legendary Belconnen that’s currently undergoing a massive redevelopment and the newly created Woden skatepark, home to this year’s Australian Rolling Open.

Woden’s an impressive park in its own right but the locals got restless with their playgrounds as they do anywhere across the globe and built the pyramid box, the feature obstacle for the ARO adding an extra bit of spice to the course. Then there were the other angled planter boxes that added an extra somethin’ somethin’, just the right amount of it too.

The pyramid box received much attention from rollers looking to out-do each other and it was Melbourne based New Zealander Danny Jensen who took the Velvet Couch Clothing best trick competition with an outstanding alley-oop wallride to top-side soul. The pyramid also featured prominently in the 20 minute jam that the ARO culminates in every year. Those 20 minutes are truly something special, the intensity of the skating that comes from having Australia’s 10 best skaters on the course all throwing down at the same time is an incredible buzz. It’s like having just watched Leading the Blind for the first time.

Rhys was always going to be a contender not only because of his skills but also his experience at the park however CJs natural ability to flow around the course and adapt his impressive vocabulary of tricks to any scenario brought him the glory, taking home $1500 in prize money and the Golden Hammer.

Being Australia’s highest ranked World Rolling Series (WRS) event, CJ earnt 3,000 points for the leaderboard which he hopes to add to as he returns to Europe and the United States later in the year.

There was a great turn out in the Under 18s division, maybe not in numbers – there were 9 competitors and none of them local, but in tricks and style. Paulie Haack had only just moved up from the division this year and would surely have had a chance of stopping Tom Coley-Sowry from obtaining a hat-trick if he was only born a couple of weeks later. So that’s TCS Australian Jnr champ three years running. And Robert Kellet taking second two years in a row, next year Rob, next year.

Thanks to Mad Cunts Chris Pullar and Brad Watson, without whom there’d be deafening sllence and egos going unchecked all day long. These guys pull from a wealth of rolling knowledge accumulated from the early days and make sure everyone knows what’s going down.

Not only responsible for hammers during the comp, Danny Jensen was responsible for the trophies, of course he was, who else could come up with a laced hammer cemented into a mug? Danny…can I get you a cup.

Did Shane, Rhys and Stu have an other worldy encounter before building the pyramid? If not Stu can make up a story for you all about it. I’m pretty sure it began one time when they were down in the marshes along the Molongolo doing some twitching when…

The registration desk where things are kept on schedule regardless of the dangers, best wishes from us all Sarah, hope the arms out the sling by the wedding. Thanks Cine, Jackie and Lani. All partners of skaters, kept the raffle tickets ticking over and kept skaters skating with first aid assistance, when they didn’t require it themselves.

Brad on the BBQ, Scottie who’s BBQ it was, Stuey’s tongs, Liam for not losing it for not being allowed to cook his bacon and eggs.

Matt for getting out with his Clag to plaster all of Canberra in flyers and Ben Warren and Hayden Golder who’s logos and photos were, respectively, featured on said flyer.

There are so many others who helped that haven’t been mentioned here, the only reason you’re not getting a mention is because RSI is creeping in on my hands. Thank you to everyone there on the day.

Everything to do with the event came from within the rolling community, which is nothing new for rolling and is exactly the point, the people holding it down now and into the future will be doing so because of their interest in skating because it’s skating.

The greatest satisfaction is that the Australian rolling community enjoyed themselves and saw a flurry of next-level skating that wouldn’t happen at any other time.

Ultimately we aim to run good events for our community, for the skaters competing to want to come back, for the spectators to keep watching, for the kids to see their idols. They’re the things against which we judge success, I feel satisfied that we’ve achieved those things. If not email us media@rollvic.org.au and help us to help you.

If I was going to sum the day up in one word I’d take a leaf out of Sante’s book and just yell ‘BOOM!’ and then add a polite thank you at the end.