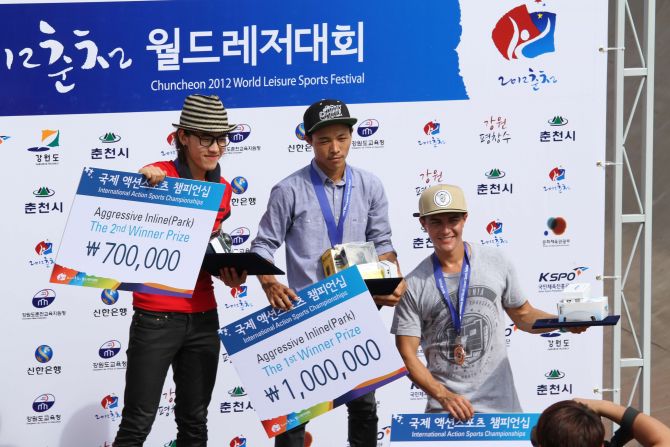 With the weather so hot Aragon commented that the last 15 seconds the runs seemed to go into slow motion (they did feel like that), and he perceptively added that it must be hard to hit on girls out in such humid weather. Good point, as body odors can definitely be an issue in Asian countries where one sweats like a nervous guilty shoplifter even when standing stationary. It was so warm that whenever you sat on the edge of the park or slipped out of a trick and touched the coping, you had to move quickly – because that shit burned. At one point during practice the bottled water for the riders even ran out. There was only iced coffee left…but a caffeinated session didn’t happen as the water was soon refilled.

While most skaters arrived at the park nice and early on the prearranged shuttle bus at 9 AM, some of the more rebellious like Note and the Hong Kong team slept in until 11 AM. They had consumed too much grilled chicken from a restaurant on a street packed with grilled chicken eateries, complete with over-sized cartoon chicken sculptures the night before.

Anyway, everyone arrived in time for the international inline park practice session, which got under way at 1 PM, slightly later than scheduled due to the skateboarding event taking up too much time. Nevertheless, big tricks were still thrown down consistently, with lofty airs thrown by the Koreans, powerful runs carved out by the Japs and Aragon spinning all over the place with his signature steez. The park was a kind of a go-big-or-go-home thing, with Aragon and Goto being the only ones attempting anything more than 540’s. To get an idea of the park check out this recap video from 2010 and 2011.

While the practice got underway the audience packed in the stands tried to keep cool with free fans given out at the venue. This synchronized fanning was quite a sight and the organizers of the event should have used the energy generated by the audience to power air-conditioning because, as I would like to repeat, it was HOT. The contest itself consisted of only two 60-second runs for each rider, with these two runs averaged out to rate the skaters. Chiaki Ito was one of the judges at the top of the park alongside some other Korean adjudicators. It was a fast-paced event and the quality of freestyle rolling (does anyone call it that anymore?) was first-rate.

Since there will be edits I won’t bore you with trick lists. All you need to know is that Aragon’s focus on massive spins (stylish 900’s and 540’s on the launch, 360’s up and out from a mini-ramp-sized quarter to a drop down into a bank) possibly cost him first place, as Note’s runs earned him the top spot with a more diverse array of tricks on show, including tech grinds like dark-side true mizous and savannah variations combined alongside slick interplanetary flat-spin 360’s.

While Note took first and Aragon took third. Shim Wansoo, another sick Korean skater wearing glasses, swagged himself into second place with tricks like a 450 backroyale up and out from a quarter to coping on another quarter just over a meter up. Maybe the Asians had the home advantage because – did I mention? – it was HOT.

The overall event was running behind schedule so the prize presentation was held straight after the inline park contest. Note was still wearing his skates from his run. The top three skaters all received a decent sum of money and everyone pretty much chilled out and kicked it in the shade of the canopies around the venue for the rest of the afternoon.

Some skaters have left early but a nice chilled grilled group meal was had with Note, Aragon, Franky Zhang and more at the end of the day. Since there is an airport bus arranged tomorrow morning most guys are hitting the sack as it is Sunday in a small countryside town and there isn’t much to be found AT ALL. Nevertheless some skaters are chilling out by the nearby mini mart, which has earned a small fortune thanks to this contest.

All things considered it was a great event despite the budget issues and there was a good amount of powerful top-notch rollerblading on show. Despite the uncertain situation with the Asian X Games, it is clear that rollerblading contests are far from dead in Asia. Let’s hope this event returns next year and more contests like this will be held in the future.