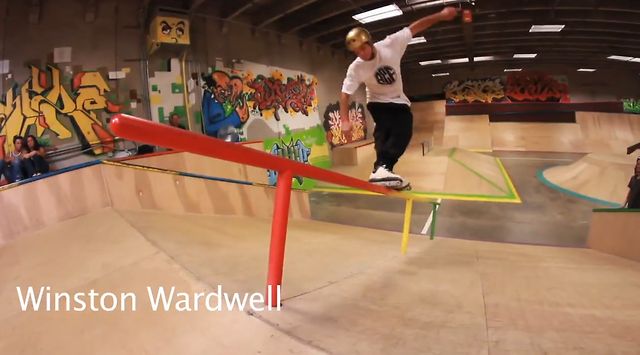 Chosen Few Comp at We Are One Skatepark in Utah

The beginners competition in all honesty did go way crazier than your typical beginners competition. A lot these kids are naturally talented rollerbladers because of their already blossoming ability for free style skiing. Rollerblading is a good off season sport they have converted to and from the way some of them are already skating it seems that blading is going to be more than an off season hobby. Brandon Johnson took third. Second and also the winner of the Chosen Few trick which was any top side grind on the down rail was Drew Koons. It got him a free Chosen Few Shirt. But Colby Stevenson came out on top. This kid will be someone to look out for in the future, his skill is only getting better and his style is already an eye catcher.

Round #1 of the pro comp went off. Spot 1 was the whole left side of the park. Tyler Hester murked the rail. 540 soyale, 540 kindgrind, hurricane sweaty, hurricane top soul, 450 royal, true negative mistrial and a lucky 540 alley oop x-grind. Winston Wardwell was lacing his usual incredibly dangerous transfers on the out ledge to down ledge. Cameron Card was getting loose on the dark side of the down ledge lacing dark makio with grab. Tj laced dark side alley oop fish with a grab 180 out. Jon Erickson caught the judges attention right away when he did a perfect true spin misfit than laced the Chosen Few true fish refund. Justin Mousley was lacing zero spin tricks switch and natural and Rivituso was doing all the out spin tricks you always get scared of attempting because you feel like you might eat shit and then you finally work up the nerve to try them and you eat shit. Eric Hallimen mostly known for people always misspelling his last name is now getting over that stigma when he came out lacing tricks like true kindgrind, true fish and 540 kindgrind on the down rail. Chris Napolian who was tearing it up lacing a perfect true makio on the down ledge first try was trying to 180 to flat over the drop ledge and ended up sticking on one of his landings and rammed his head into the side of the A frame box knocking himself unconcious and parametics had to be called to the scene. Luckily Chris is fine and hopefully ready for next year. He was strongly considering doing a switch up on the flat to down drop ledge I hope he hits next year.

Spot #2 was on the whole right side of the park including the back quarter pipes. Cameron card had no problem racking up points in this round. The coping killer had plenty of fun lacing on the A frame and also throwing in some big gaps. Tyler Hester came with the heat again in this round with hurricane top soul, 450 back roy, 540 true mizou and 540 true porn on the A-frame he made sure he put an exclamation point on his spot in the finals. Jon “Easy” was going hard on the rainbow box but what caught my eye was the only skater to hit the giant down ledge on the right. Jason Rennert did not go unnoticed lacing full back farv and inspin soul on this massive down ledge.

The finals went off at spot #3, the entire park. 900’s were pretty much routine at this point and the top 11 skaters were hitting all sorts of tricks but what stood out was the transfer Winston Wardwell had been lacing all day on the 3 back wall extensions. Soul drop true top soul drop true top soul and he almost transferred back to soul down the edge of the ramp on one attempt. Cameron Card laced line after line but what really caught the eye of interest from the judges was his launch soul up the A-frame 540 out and his makio up to fish down both grabbed. But the real battle was between Tyler Hester and Jon “Easy” Erickson who out skated the rest of the pack. They were nailing trick after trick. At one point they were both skating the rail and laced hurricane top acid back to back. Tyler also threw down a perfect 540 true top soyale on the A-frame box  and got best trick with his 540 true soul 180 out. He got real technical when he pulled the hurricane sweaty on the square down ledge which was nominated best trick by one of the toughest judges we have ever had. Tyler continued to destroy the down rail but Jon had racked up more points in the end and took the win. Jon decided to do some of the more unpopular dangerous tricks like full true kind grind on the rainbow box as well as full true soul, full true acid, hurricane top acid, 450 back savanna, hurricane front unity then 270 back unity in a line and also had his own destruction session on the rail lacing the full back torque to true acid, 270 back back slide to soul and to sweaty, 360 porn, full true porn, hurricane front unity and a perfect full true soul to end the competition.

The comp was a success and the venue could not have been better. We are in the works of planning something way bigger for next year so save up because it’s worth a flight out to.