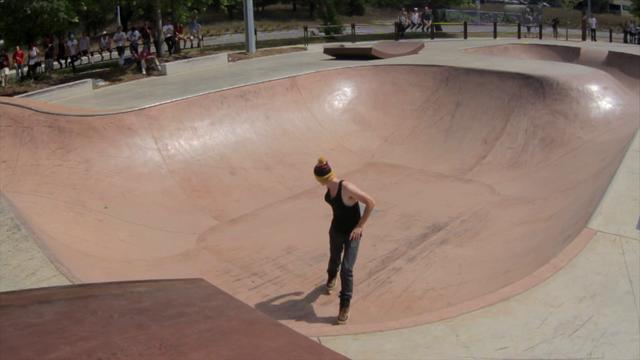 The Australian Rollerblading Open is the biggest park-skating competition in Australia and brings together rollers from across OZ to battle it out for national supremacy. It’s the one time of year we can all count on to see each other, catch up for a roll, have a beer or two, and witness a whole new level of rollerblading. This year’s ARO didn’t disappoint with spectators and competitors from almost every state making the trek to Canberra for the weekend.

The new Belconnen skate park was the battleground for this year’s competition held on the 8th of December 2012. This skatepark had only been skated by the Can-braa locals and a handful of other Aussie skaters, so lots of the other rollers were keen to get there early and get a few lines locked down the night before the comp.

SK was lucky enough to get chauffeured from Melbourne to Canberra (cheers Kristy!) and with Trent Phillips hungry to have a pre-session, we rocked straight up to the park late Friday afternoon to suss it out and catch up with all the crew. Everyone kept it pretty chill, waiting for the comp day to throw down, so we finished up early and headed to the backpackers to unwind and see what nightlife Canberra has to offer. Our professional gun jumping training kicked in and a quick drink turned into many hours out, and a frisbee session in the backpacker’s car park. Everyone has their own competition game plan and few of the main contenders weren’t to be seen even in the wee hours of the morning. It’s a bold strategy…

Comp day began with some Subway brekkie before heading down to the park to find Shane Onus already down there with esky, registration desk, PA system and marquee – nothing short of legendary! Huge thanks as well to Dave Jacob and his brothers for loaning and setting up the PA system! The temperature was already 30C approaching midday as we got the u13, u18 and girls competition started. After a 15 minute jam session and some awesome skating the results came out as follows:

It’s awesome to see the mix of ages and skill levels in these categories so props to all of you that entered! We’d love to see some more skaters entering from these categories to give this year’s champions some more heated competition in 2013, and to help bring in the next generation of rollerbladers. Hope to see you all back at ARO 2013!

A huge upset came from Rian Arnold, when in the first trick of his heat held the most locked on AO fish along the coping and up the hump, causing him to be thrown backwards off the high part and landing down on his back and neck. Rian was shredding in the warm up and everyone was looking forward to watching him skate the finals. Paulie Haack was out too with a huge 180 that was missed off the top of the quarter. Hope you’ve both recovered now homies!

While everyone else was keeping consistency and flow at the heart of their lines, Canberra local Tristan Richards brought the stunt blading out by throwing his body over untouched lines in the skatepark, which he pre-marked with directional arrows so he knew which spot to launch from. All the competitors killed it and gave us all a taste of what to expect in the finals.

Of the 25 entrants the finals were down to Gavin Drumm, CJ Wellsmore, Tristan Richards, Josh Nielsen, Brad Watson, Danny Jensen, Oliver Czaja and Hayden Holder. Everyone got straight into the jam, bringing out new lines around the park that weren’t used in the heats and feeling the vibe of the amped up crowd to throw down some once in a lifetime tricks. No one will forget Gav Drumm’s gap in to the park with the 360 that overbalanced into a cess slide underneath a flat ledge in the park, or Rhys Bell’s 540 out of the park, or Josh Neilsen’s cork 720 over the ski jump backed with a cork 900 over the second jump (Velvet Couch Best Trick), or CJ’s 540 into the park followed by back noogs 450 out, or every ridiculous stunt that Tristan pulled off around the park – witnessing these tricks in person is what these comps are all about and just proves the huge growing talent of rollerblading in Australia.

The tricks kept coming, and the finals ended up lasting for about 40 minutes in the searing heat before coming to a close and crowning this year’s Australian Rollerblading champion – Josh Nielsen. Congrats on killing it all year around the world and to then come back to OZ to take out ARO 2012!

We would like to thank all of our sponsors, without the support of these sponsors and the hard work of Rolling Victoria we wouldn’t have been able to put this event on, so be sure to check out Skater HQ, Bayside Blades, Skatebiz and Velvet Couch (VC) Clothing.

Support the companies that support these events!

With the event wrapped up we headed out for celebrations at Krave. We were treated to the skills of Tom Coley Sowry, who somehow managed to get up on the mic mid set and spit some fury, with everyone with the crowd loving it.

We cannot thank everyone involved enough for helping to make this the best ARO to date. This was the first one organized by the current Rolling Victoria team. While it was not without some bumps, the weekend was amazing and the competition defies any description unless witnessed.

Special thanks to: Shane Onus for providing almost all equipment we needed; Dave Jacob for hooking us up with the PA system, and for both organizing and DJing the after party; Jenny Logue for admin/advice/help/anything we needed; Gavin Drumm for advice; MC Chris Pullar; Mitch “One Man Fox Studios” McCrae; Hayden Golder and Rhys Bell for photography while both skating in the finals; Daniel Tab Talbot for being on first aid duty; all entrants for supporting these comps; and all spectators for coming down to check it out!

If you have any feedback from this year’s comp please let us know at http://rollvic.org.au/feedback-aro-2012/ Can’t wait to see everyone again at ARO 2013!