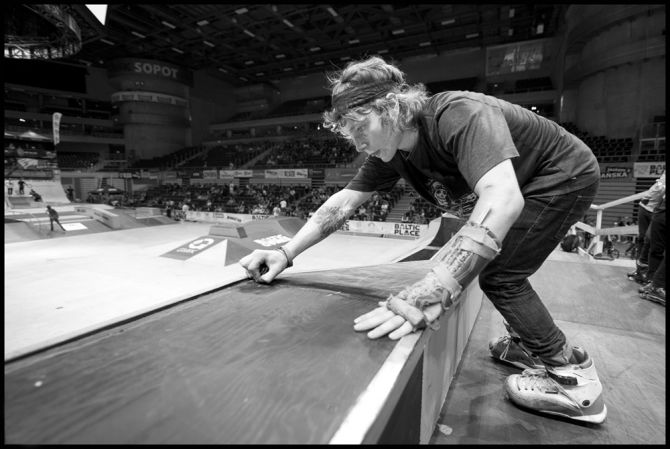 Learning from previous years’ experience with poor weather, the event organizers managed to arrange the contest at Ergo Arena in Gda?sk, one of the most advanced facilities of it’s kind in Europe. Entering it for the first time and seeing the park was really something to remember. The event itself gathered some complaints due to its size, which some believe takes away from a true festival feeling; the skatepark was no longer situated in front of the main music stage, around the booths, or the kids course. All of these were scattered around Ergo Arena area, which could cause some confusion yet placing the park indoors let the organizers to conduct the event independently of ever constant changing weather.

Another complaint came from the skatepark’s design itself, something clearly focused on BMX. Obstacles were massive, but planned and placed well at the same time. It could be divided into “Street” and “Jumps/Dirt” sections, however it was really line-friendly, although requiring careful efforts.

Thanks to Hedonskate, Baltic Games gathered plenty of well-known, international riders: USD Team represented by Nick Lomax and Richie Eisler, Razors Team with Josh Glowicki and Mats Kaarel-Ruus, while Nils Jansons, Jacob Juul and Dominik Wagner stood full force for Remz. Also present: Warren Digne (Rollerblade), Jojo Jacobi (Valo), Frederik Anderson (Hedonskate), Russel Dineen (Kaltik) and Igor Jovanowic, Alex Popovic. The great pro-active nature with most of these riders was their approach to all youngsters visiting the Baltic Games – everyone could skate, talk or just chill with the pro riders all of the time. That really made the vibe something truly special. Small sessions at the Flybag with Richie and Josh or at some street spots around the Ergo Arena with Nils made the kids really juiced and feel part of a big family.

Thursday was the day of open eliminations for everyone. About fifty people signed in, however only five could qualify for Friday. Contestants were divided into groups and competed during few 4-5 minutes runs. For most people who came to Gda?sk early Thursday morning the initial qualifications were painful. After a long trip to the Polish seaside getting on skates immediately and adapting to such a large park can be difficult. Still, the amount of new bladers was again impressive. There were a lot of new faces, more than fifty Am riders, which just for qualifications is a quite an impressive number.

Friday’s Semi-Finals were terribly delayed. Bladers were let in around 18:00, which wouldn’t be so bad if not for the annoying BMXers who didn’t want to clear the course (the organizes seemed to simply not care). Add the rain outside, which prevented use of other attractions (Flybag, booths, small kids-course) and you get the picture of a rather dull Friday.

Luckily, when we finally started with semis people seemed to cheer up a bit. Semifinals included the top five from Thursday’s qualifications and around twenty invited riders. This time the riders were divided into groups of three and consecutively showed their skills in line-based runs. As you can imagine, such a lineup of riders can bring a pretty unreal show. Seeing Richie, Nick, and Jacob in real life destroying the park with ease was just amazing. Although the Polish front-runner, Piotr Combrzylski, was absent due to an injury the Polish crew didn’t slow down at all. Lukasz Niernsee flew around the park with clean lines, Lukasz Kalmierczak stood out with his 540 AO top soul on the quarter extension, while Krystian Zarzeczny killed the spine with crazy spin-flip combinations.

With a significant weather improvement on Saturday the entire Ergo Arena area again came to life, and what’s more important everything was more or less on schedule. To make the Finals even more enjoyable for the audience the judges skipped the idea of a jam format and group lines in favor of short, single lines for each of the finalists.

You probably know the results by now, so I will focus on the biggest tricks that went down that Saturday. To start with, Nils’ disaster to top soul throughout the entire length of the rounded quarter extension, followed by a fishbrain, causing the crowd to go insane. Jojo Jacobi kept finding new spots for his signature high stalls with thread-the-needle offs or other creative transfers that no one seemed to notice. Nick Lomax did the highest and cleanest 720 on the huge quarters, while Kaltik team rider, Russel Dineen, landed a massive disaster to AO pornstar from the small quarter to the biggest wall extension in the park… without a cooping! It took him a few tries and some solid falls though, but eventually he stomped it. There was a serious fall from Jacob Jull who missed a BS royale on the edge of the biggest funbox (or, death box as everyone was calling it) and fell hard on the ground from its highest point. An ambulance ride and visit to the hospital was unavoidable, but fortunately nothing serious had happened. I also remember the sick 900 thrown by Mats Kaarel-Ruus and fast 360 soul transfer on the biggest quarter-pipe by Bart Laubsch.

The whole event ended as usual with an official loud after-party that quickly moved from the music stage Arena to the best Polish seaside resorts in Sopot where all invited guests got a chance to give a whirl at one of the many night clubs.

Overall, I will remember Baltic Games 2012 as a successful event, yet I won’t hide the fact that this year’s edition really lacked good organization and rollerblading was treated with less respect than it deserved. Anyone, here’s to the future. See you next year!