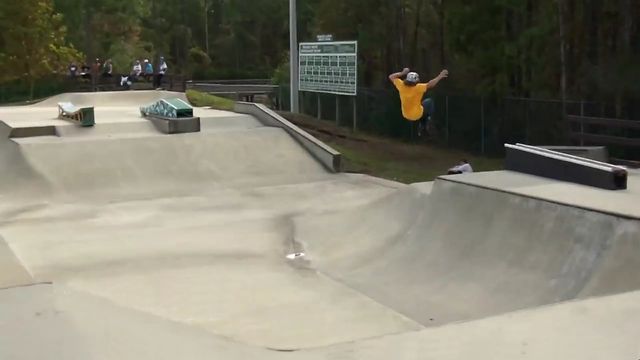 Our beginner and Intermediate divisions had some some real talent. Some of which will definitely be skating in the advanced division next year. Sean Wilson, of Weston, took home first place and a brand new pair of Razors. Also, standing out in the Intermediate division was Christian Tajudeen, and Tavio Guarino, both Orlando natives.

With the start of the advanced division, the night couldn’t be more perfect. The sun was about to be away for the night, and the park lights were starting to come on. Our advanced division had seven heats, which is about 40 skaters. After the fourth heat, it started to drizzle. The fifth heat had started, and the rain just emmensly got worse. Wake Schepman, Blake Kelly, Yandriel Silverio, Philip McLean, and Seth Lloyd had to hold off on their heat until the rain had let down. We went ahead and announced the beginner, and intermediate winners, and al so announcing that the contest would be postponed until the following day at noon. We all had went out for a night on the town in the nation’s oldest city, St. Augustine, Florida.

We returned the following day to be surprised by the sunshine. Now this is what Florida is all about, the sunshine. It was a mere 75 degrees and it was one of the nicest days we’ve had in a while. Those who needed to return to finish their heats did just that. Whoever made the finals returned as well to compete for their place as Bladesgiving 2011 Champion.