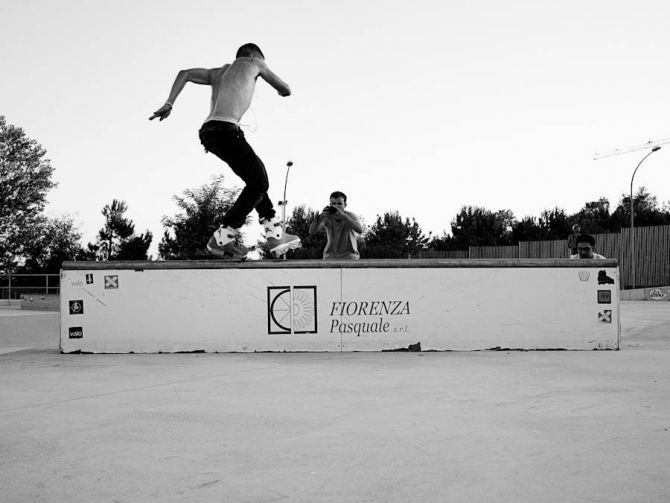 I arrived at the park at 11 am to help Nico with the organization, the sun was hot as hell but the wind help out a little bit and after some banner placement and other stuff people were arriving from all over Italy, someone decided to immediately check the concrete of the park but the most decided to chill in the shadow drinking beer and eating hamburger and hotdogs kindly cooked by the guys who runs the park.

The competition started at 5 pm with the main category and the young guns showed up with some crazy stuff that gives me some real faith for the future of our scene, Diego Molinari kicked all the asses and won the competition in his category with some cool line and hammers like fakie 540 inspin soul on the box that was build by Nico the last year. At 7 pm when the sun was a little bit more friendly was the time of the Master category with two big jam of 4 blader at time for a 15 minutes show each, the big stairs were full of non blader people and the battle was hot, Jason Adriani throws some hammers on the quarter wall, Nicola Fiorenza killed the course with billions of very tech lines, and Adrien Anne put together an incredible number of impossible switch ups, everybody battled on the box and in the end Nico was the winner.

After the competition we were back to Jesi, Nico’s home town, and we had a typical dinner in a nice restaurant in the center of the old village and had good times and some drink to wish an happy birthday to Nico!